Ugh....utterly disgusting.  If I didn't know better I would take a huge, smelly, stinky, riddled with undigested corn, steaming crap in front of this because this display is no better than a restroom in a bus station.  Just utter crap stacked on top of crap. either the individual toys are garbage, or their price point s way ore than it should be (ex. the Grimlock vs Bruticus set $149 + tax).  The only real new toys that I have been seeing appear are the Constructibots.

Anyway, the real reason for this post is because once again I have gone to TRU in the search for the new Hasbro MP soundwave, and as you can see by the pic....nothing.

What I have found interesting is that I received a call from my friend "M" who said the he had called TRU asking about MP Soundwave and was told that a shipment had come in the day before and that they were sold out. Of course, that was the one day off when I decided not to go to. Funny thing is though, I went today right before they closed and I find it strange that there isn't even a section designated for Soundwave....so how can TRU tell us that they came in already? where are they putting them? Are they even making it out to the shelves?

I will leave it to your imagination to figure out what is going on behind closed doors at the store. 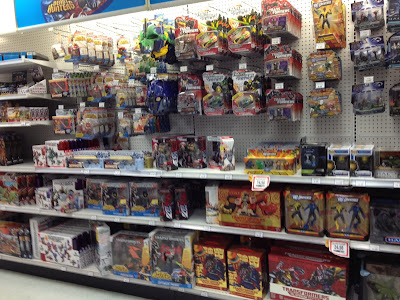 - Angry Canadian Decepticon -
Posted by acdecepticon at 12:07 AM