This was a figure from a two-part purchase that me and my friend "M" did I about 2-3 years ago.  "M actually came across this guy with a number of other TF figures in a Kijiji ad, and

while we couldn't talk the seller down from his listed prices, we still went ahead
with it. "M" grabbed this guy and I ended up getting Fire Guts God.  Both are really great pieces and while this one has less playability than Fire Guts since there is no God Bomber, it is the more rarer one with a much lower production run with estimates ranging between 1500 to 2500.

Background: Once there was era in which the planet Seibertron had been struck by a fatal energy shortage. At this time, Convoy and HiQ, a scientist from the planet Nebulos, undertook a perilous journey in search of a new energy to replace Energon.

Abilities: In order for him to extract the super-energy "Nucleon" that exists in black holes, his entire structure is now protected by a phase modulation shield. He can now carry out activity in super-gravitic environments.
﻿ 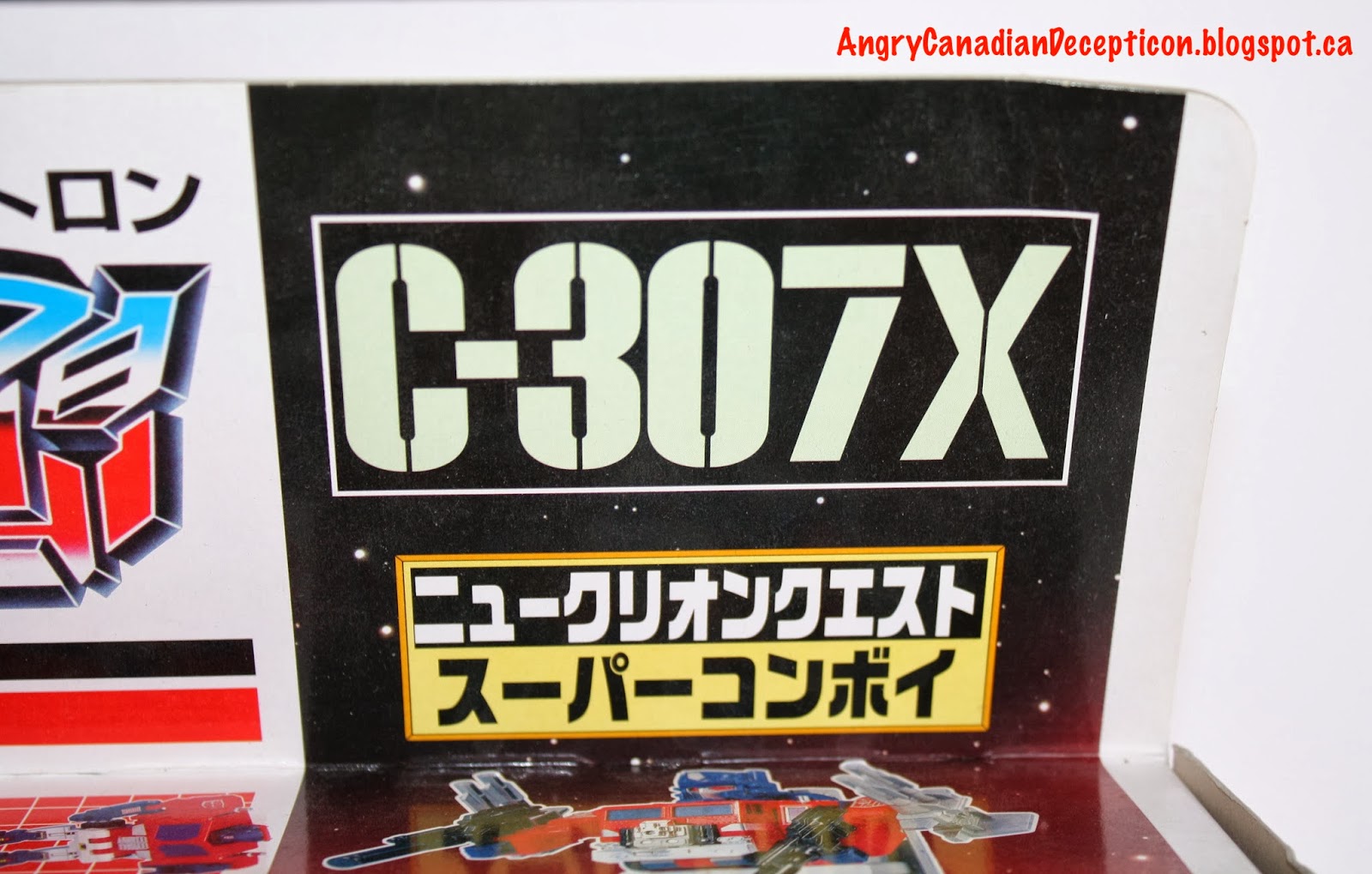 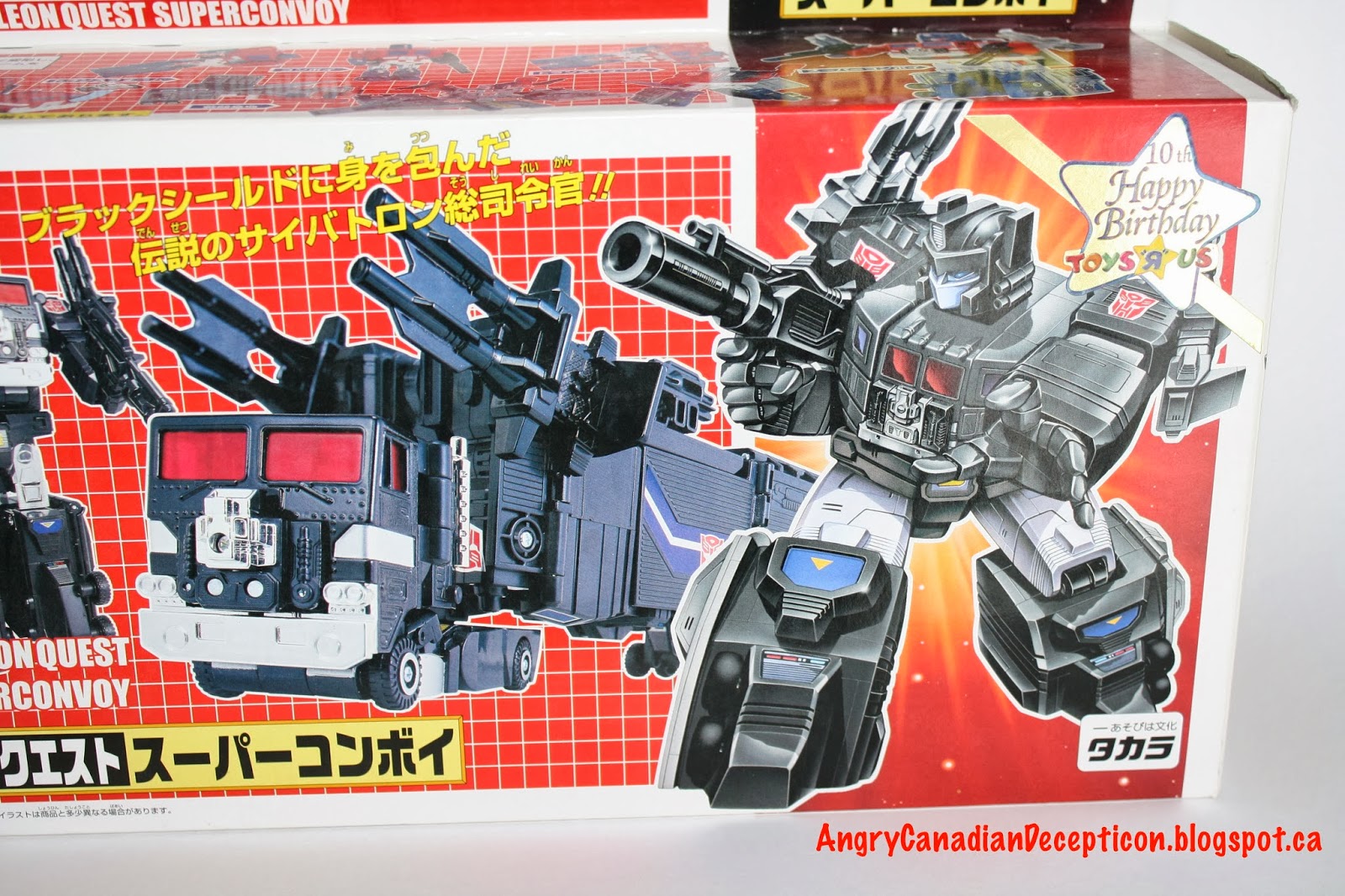 This mold was recolored from Super Ginrai (1988, Japan) and was later recolored as Fire Guts God  Ginrai (CLICK HERE FOR MY REVIEW) (2002, Japan) and Commemorative Series II Powermaster Optimus Prime (2003). 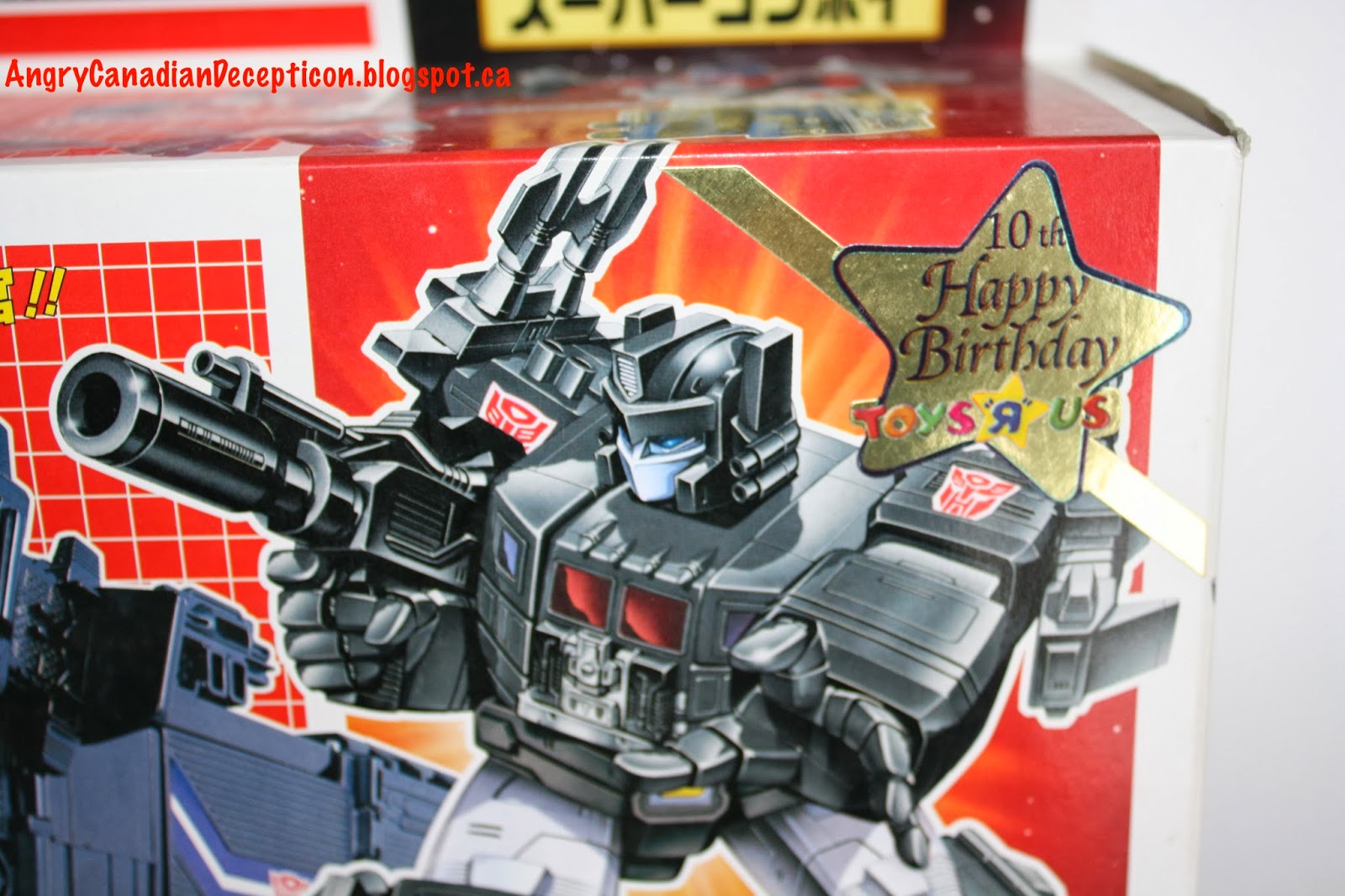 This redeco of the Ginrai tooling of the Powermaster Optimus Prime figure (released concurrently with the 2001 reissue of the Ginrai figure) was a Toys R Us Japan exclusive black repaint, made to represent the original Optimus Prime equipped for a special mission. All of his red and blue plastics were changed to black, his clear blue windows were now tinted red, making his overall colour scheme very reminiscent of the now-familiar 'Black Convoy' color schemes. 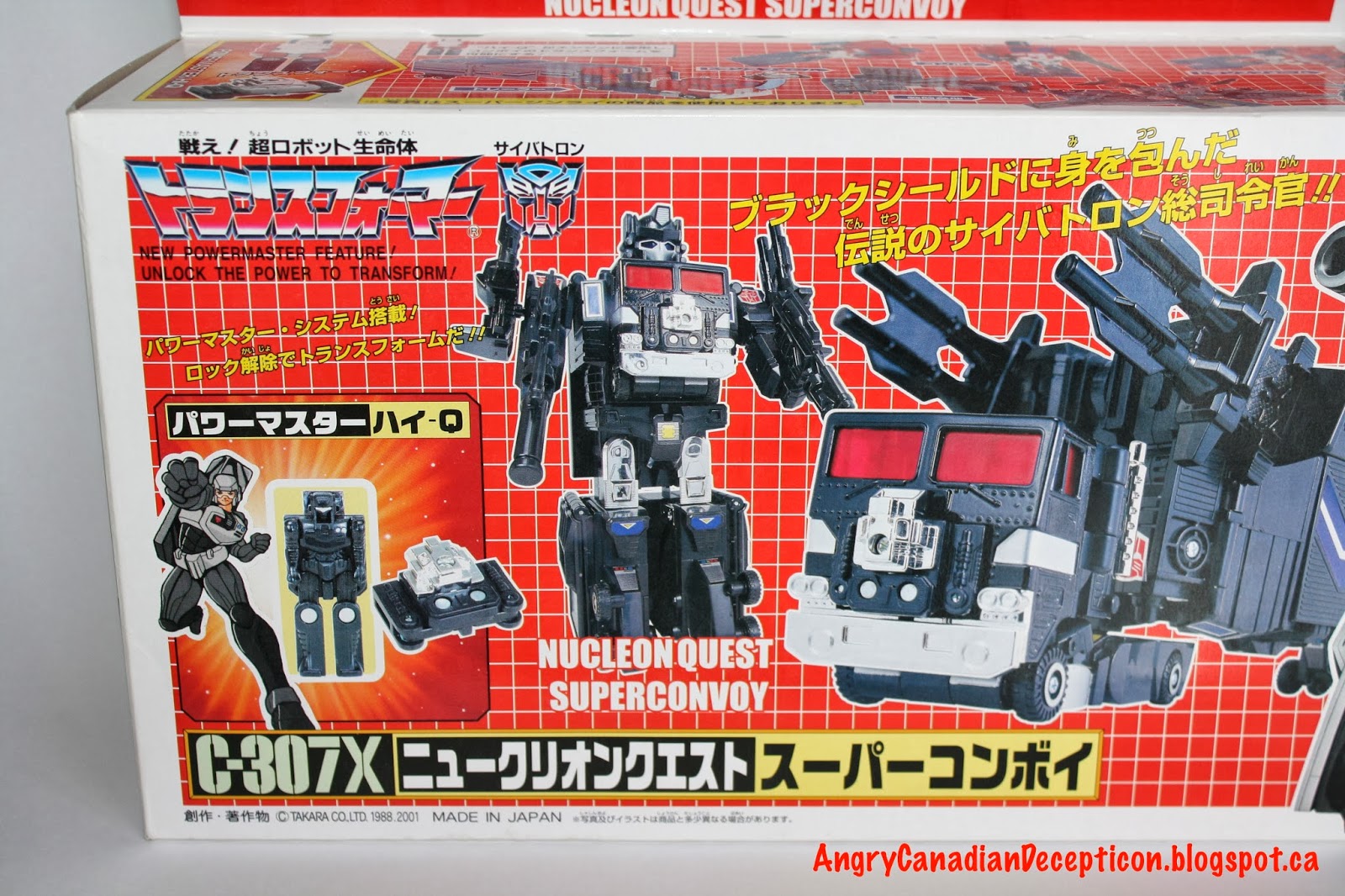 The packaging pays homage to what Takara used for the Masterforce series.  The front show the Nucleon Quest version of the toy along with artwork showing the new color scheme. 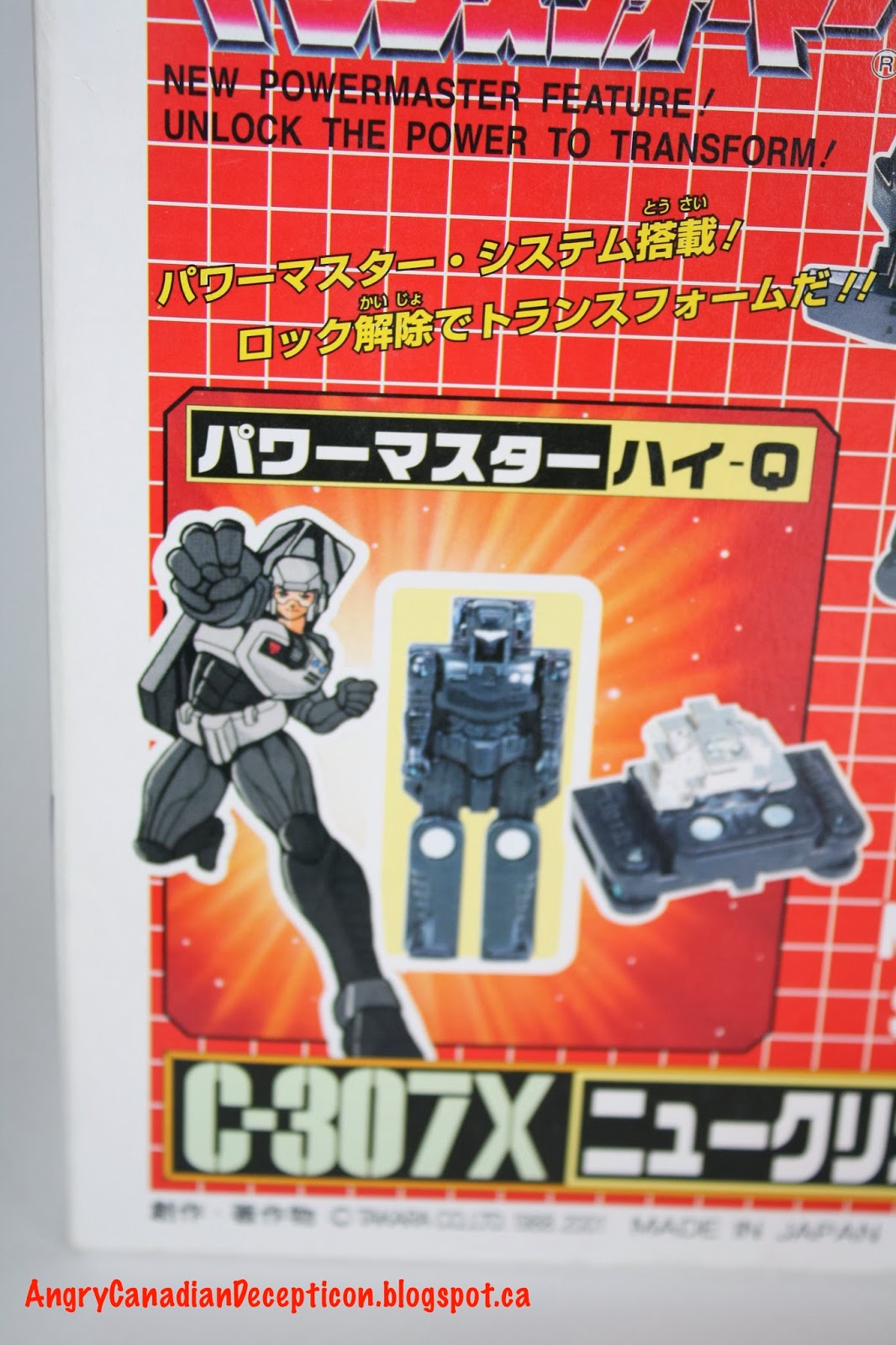 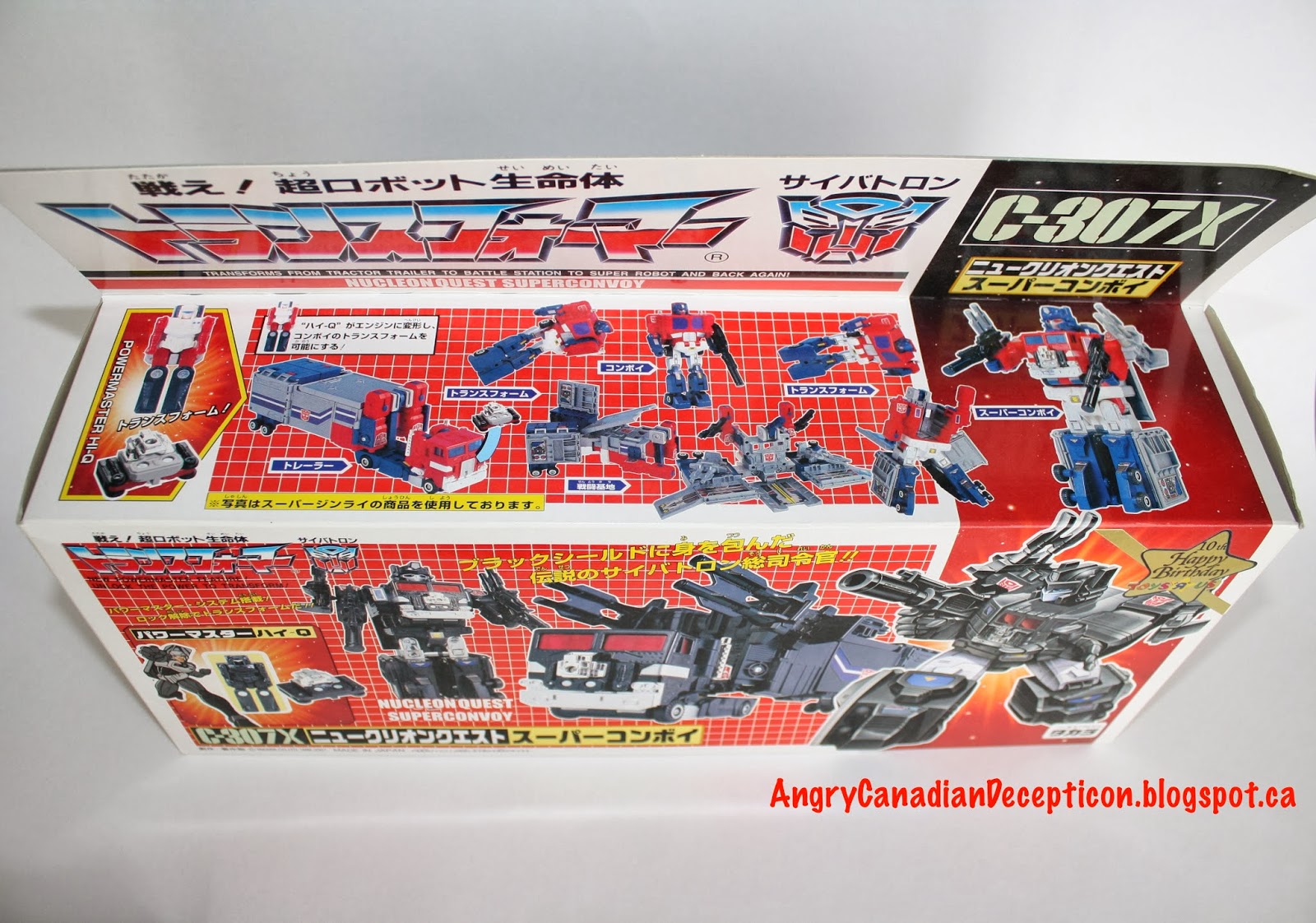 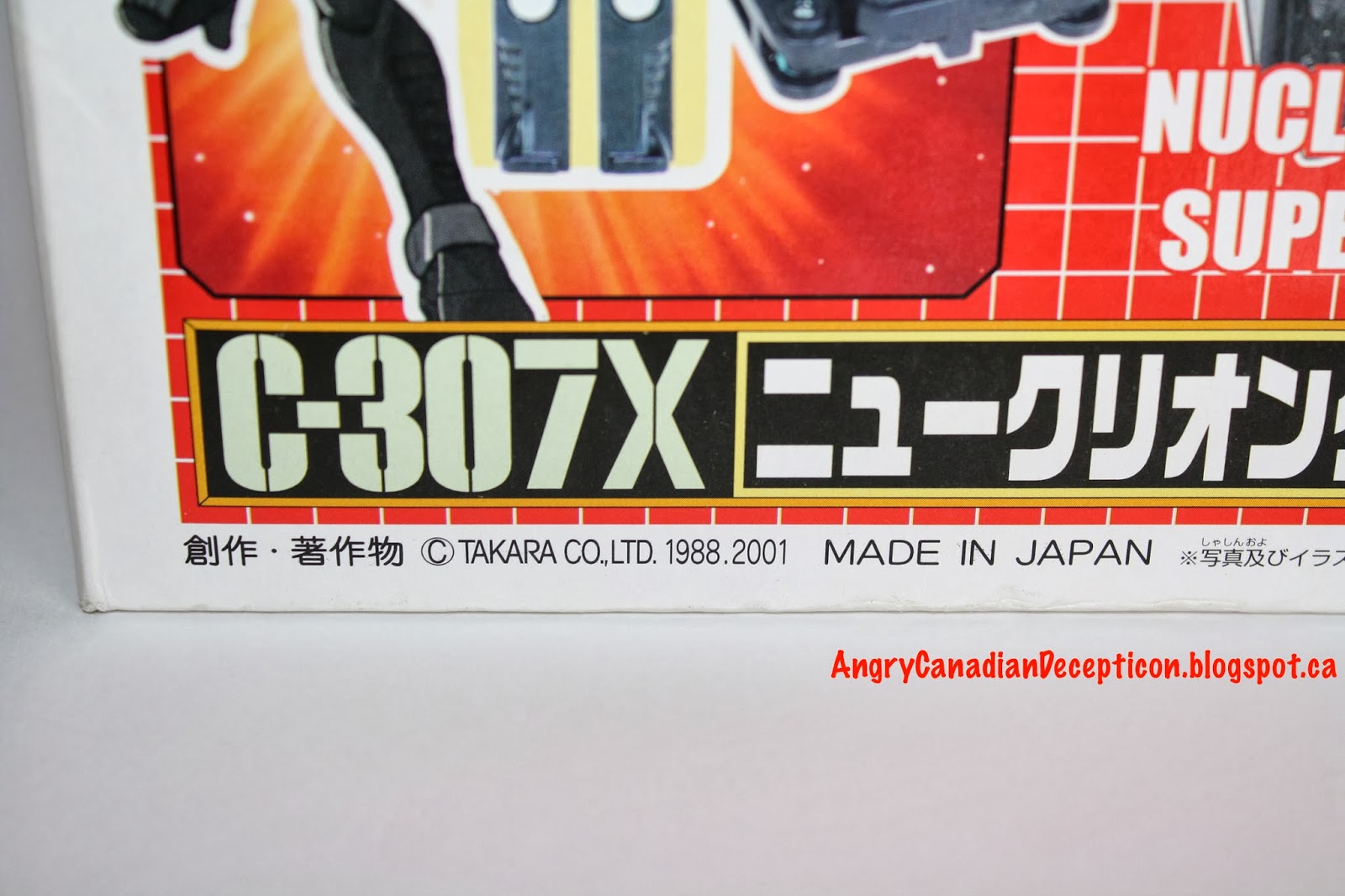 This figure was available exclusievly in Toys R Us stores in Japan in 2001. 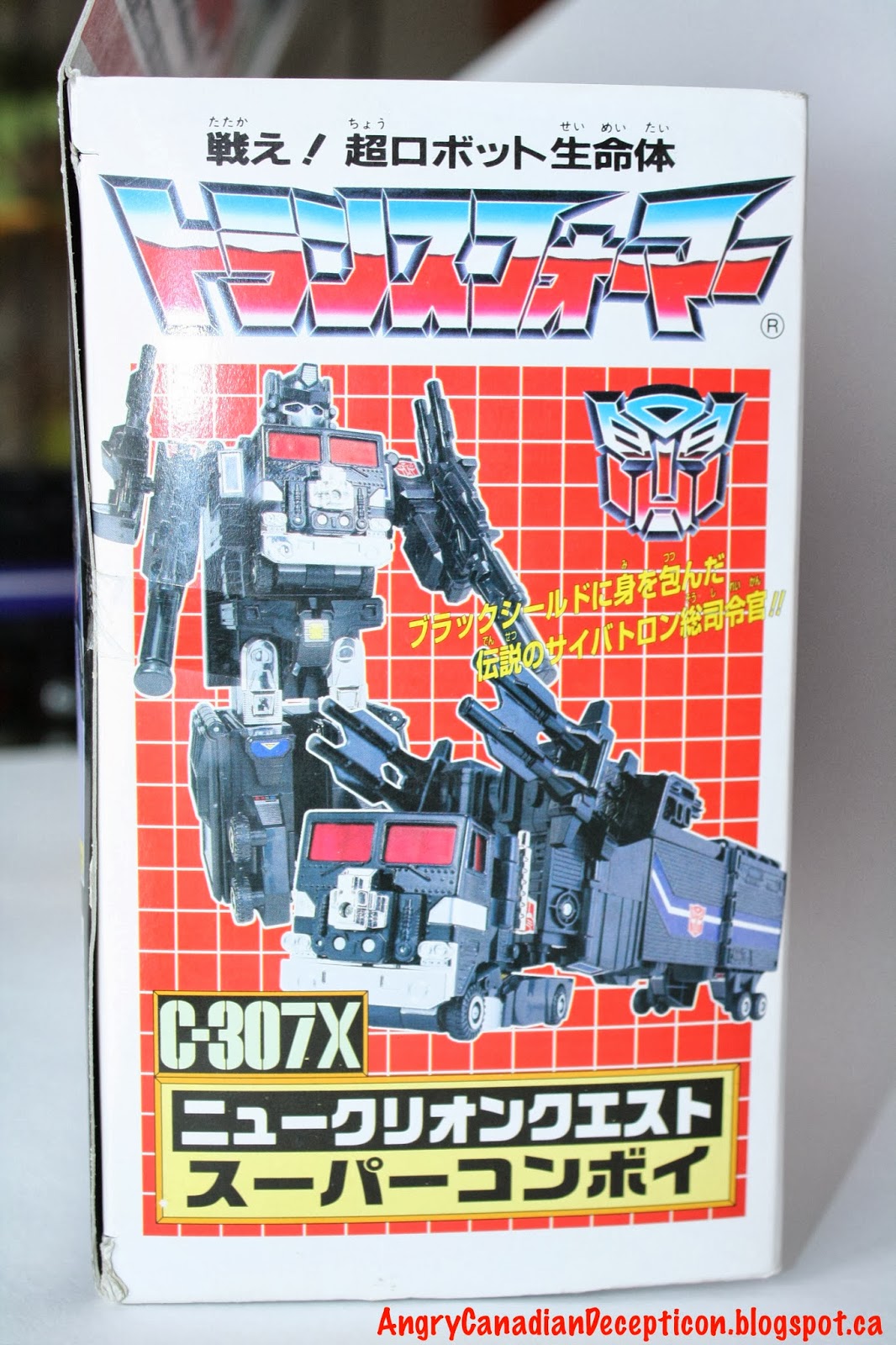 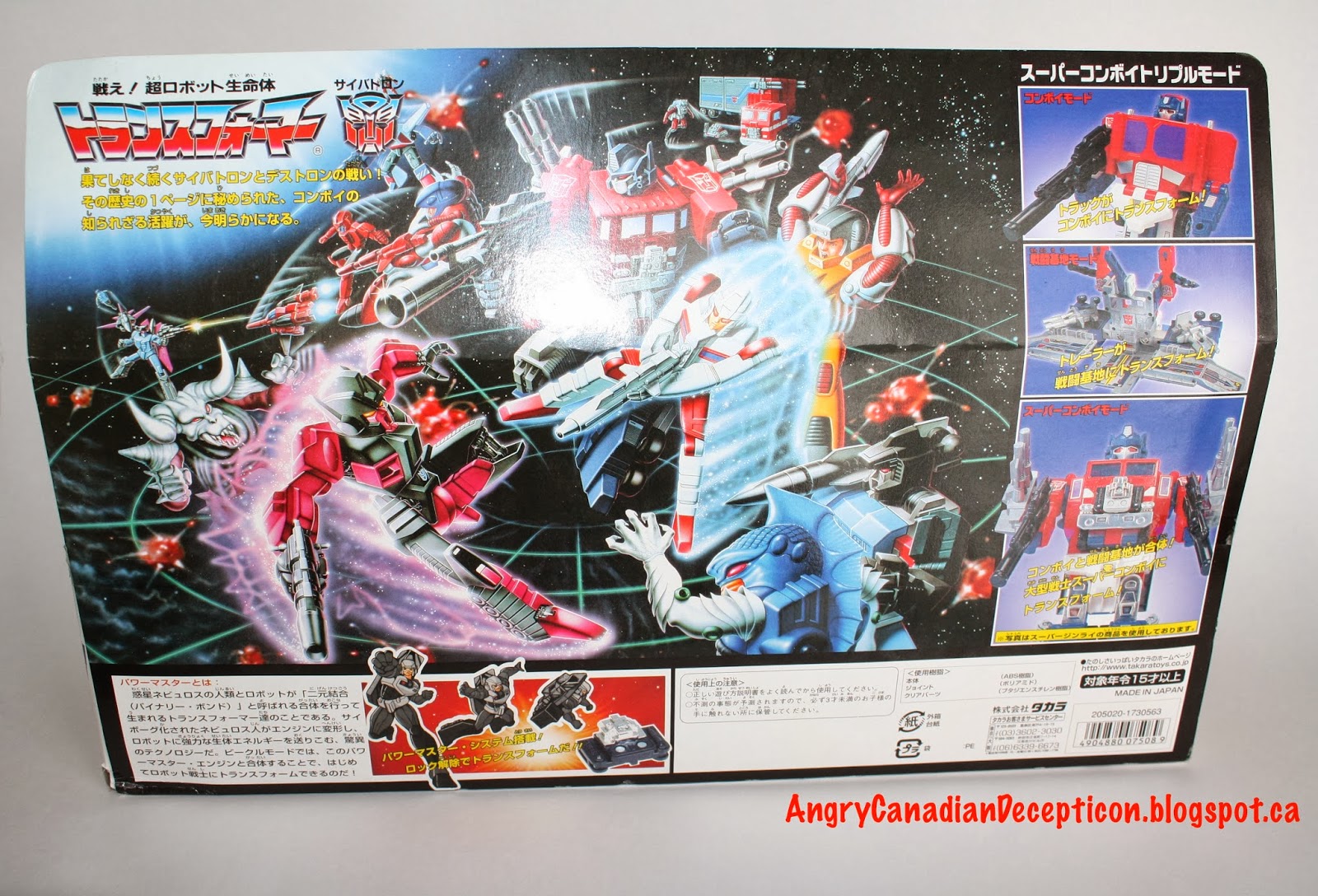 Really nice back of the box with just the slightest crease in the flap. 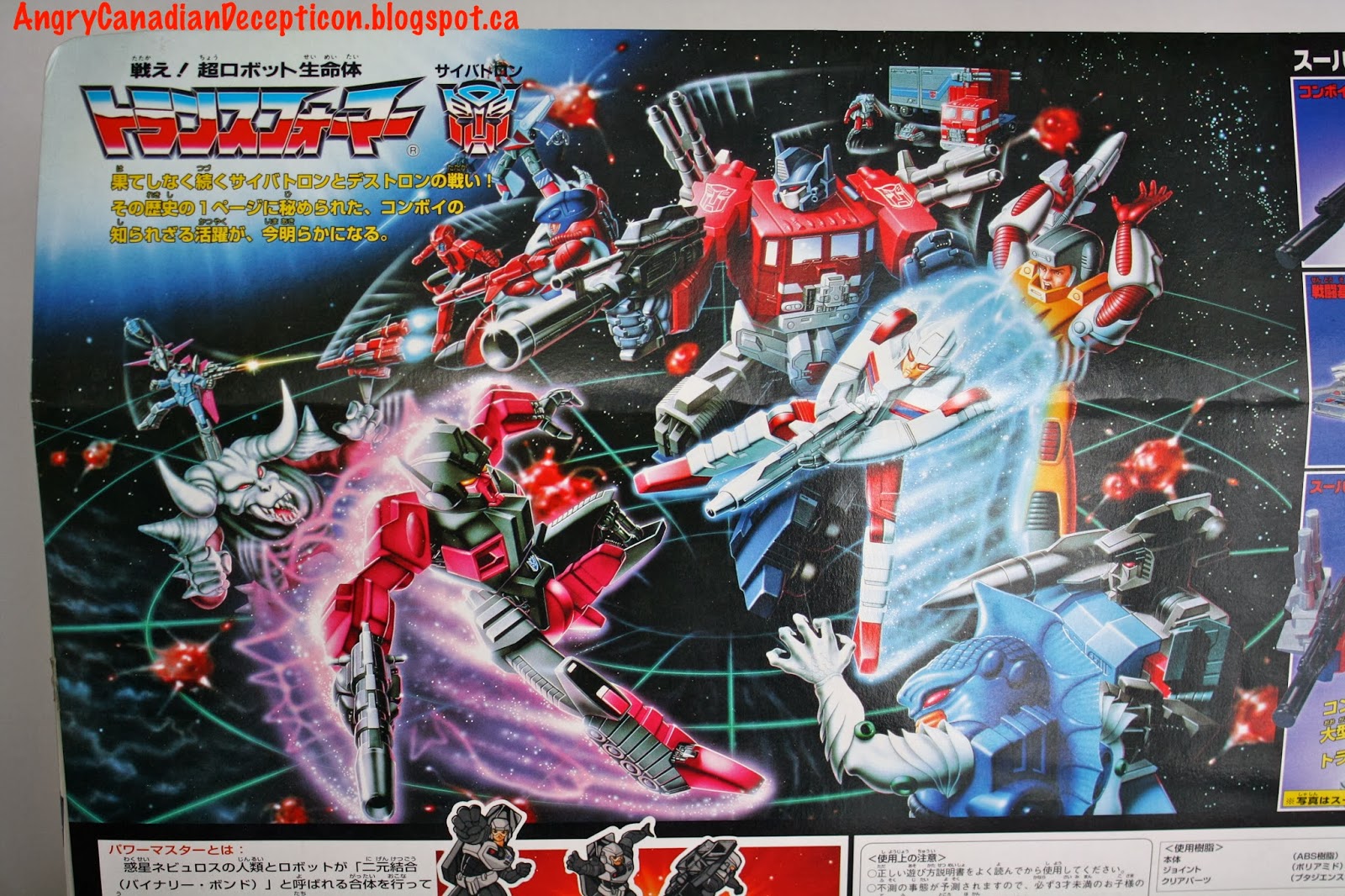 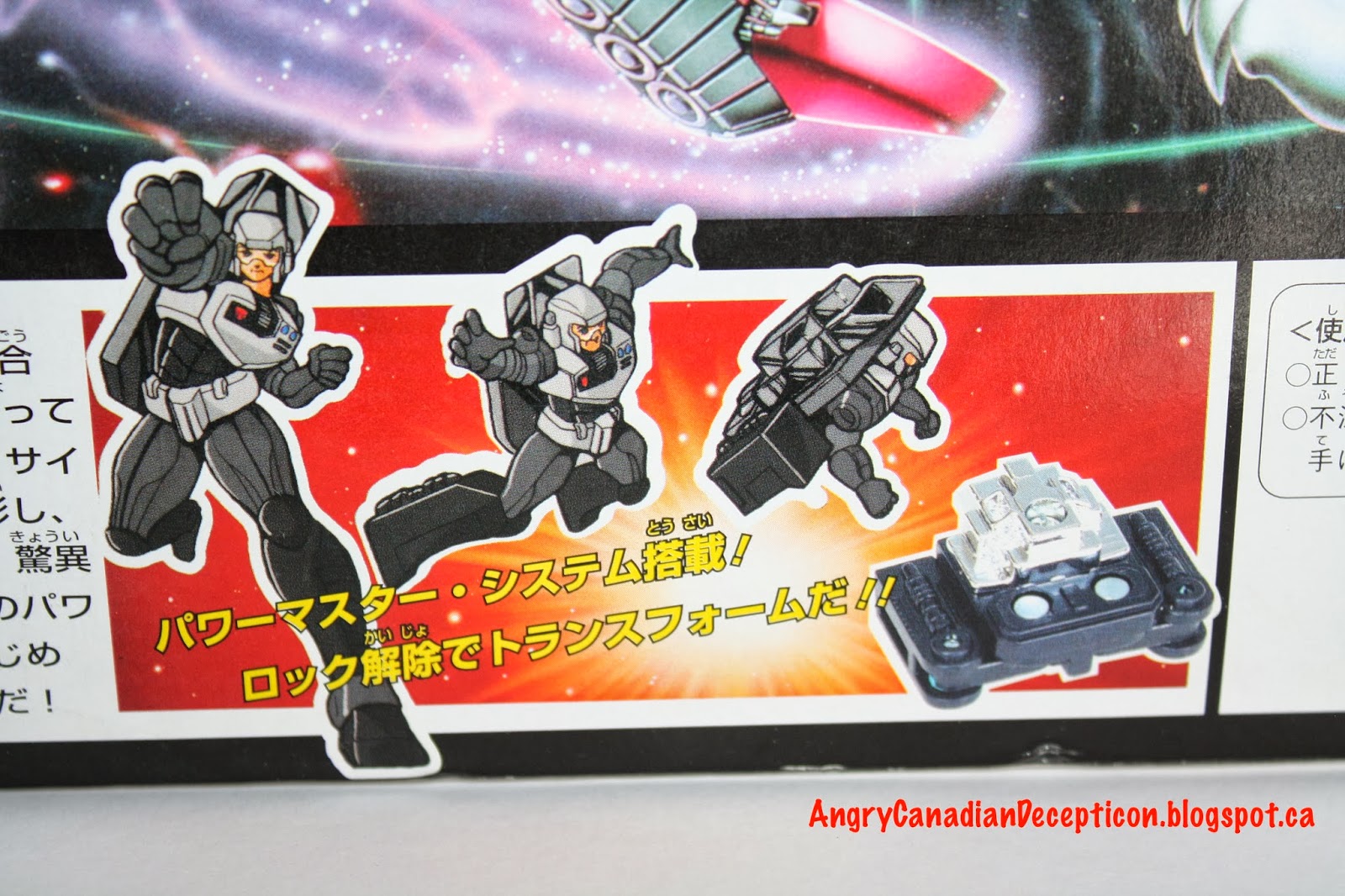 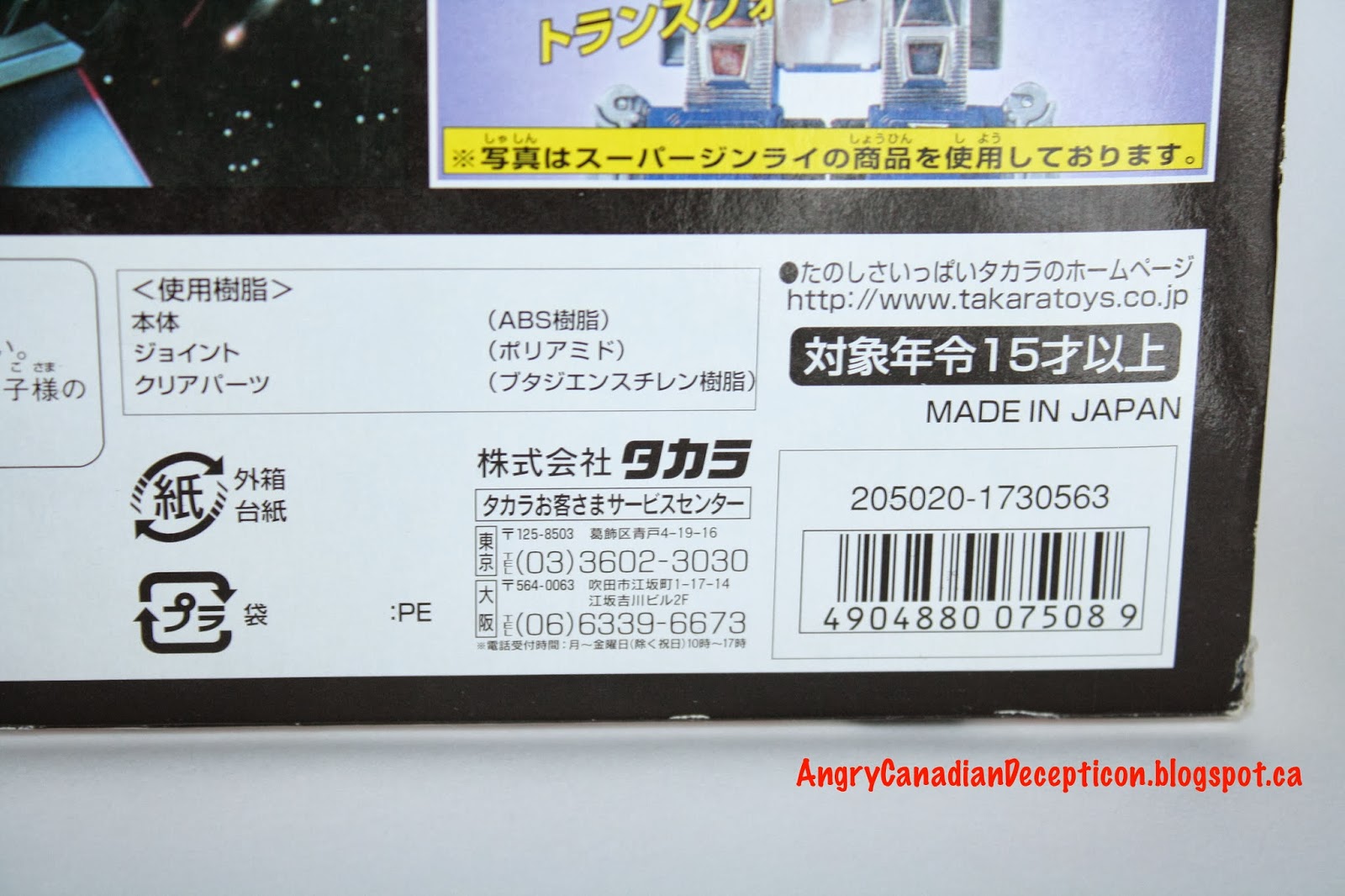 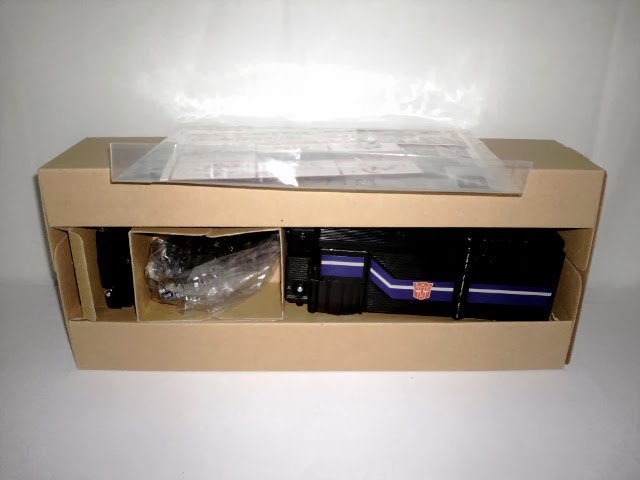 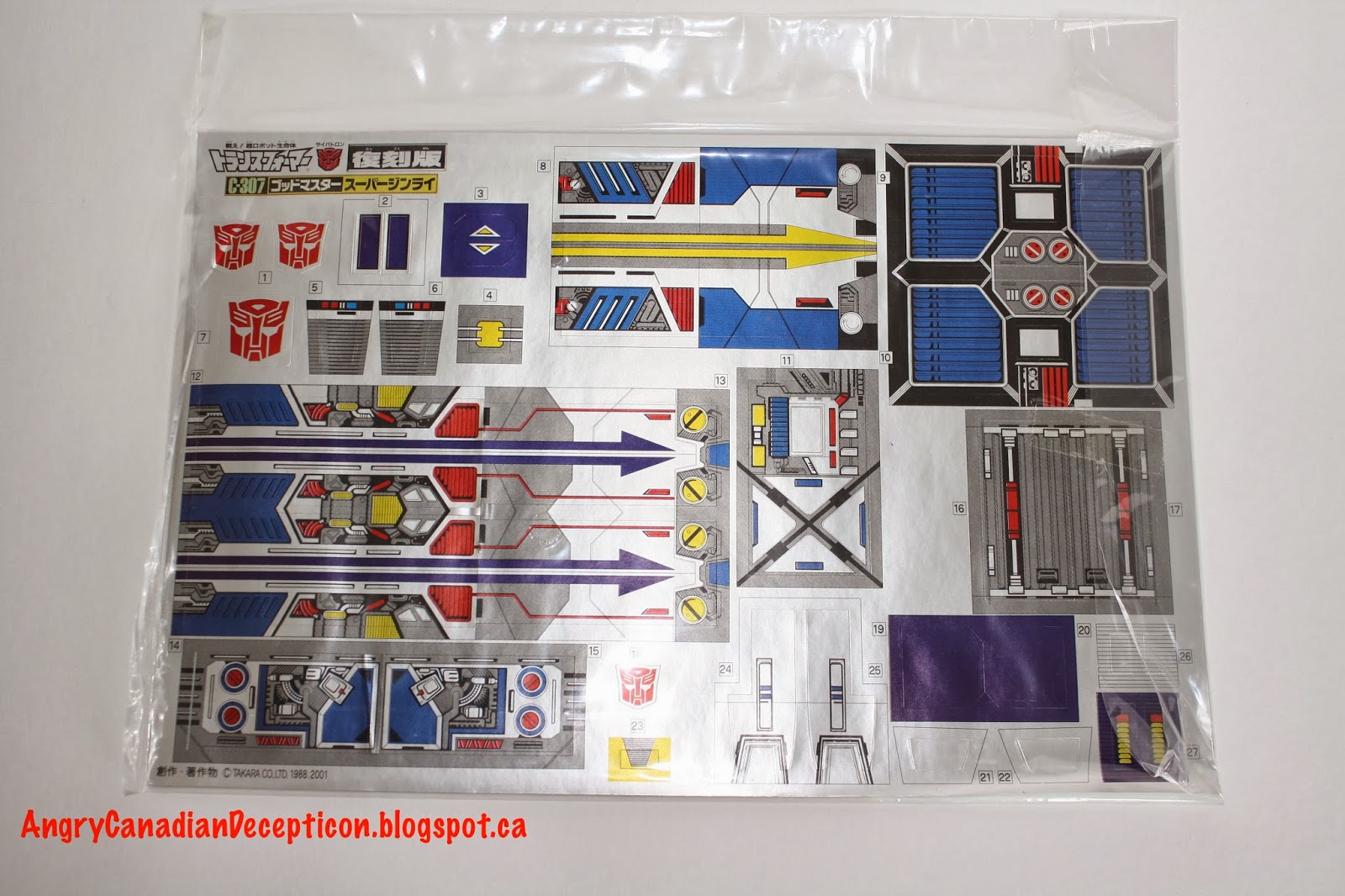 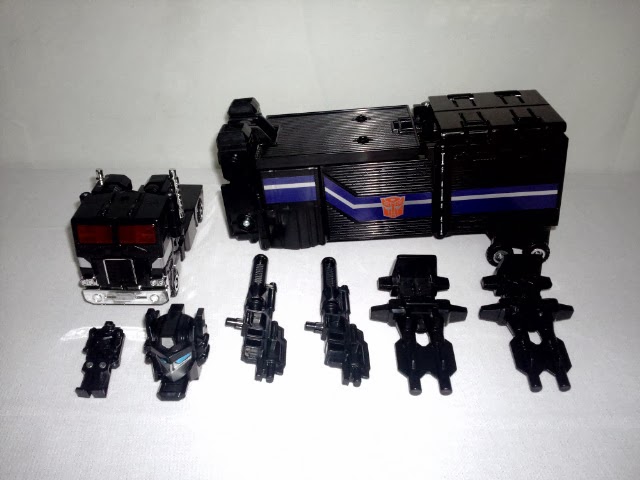 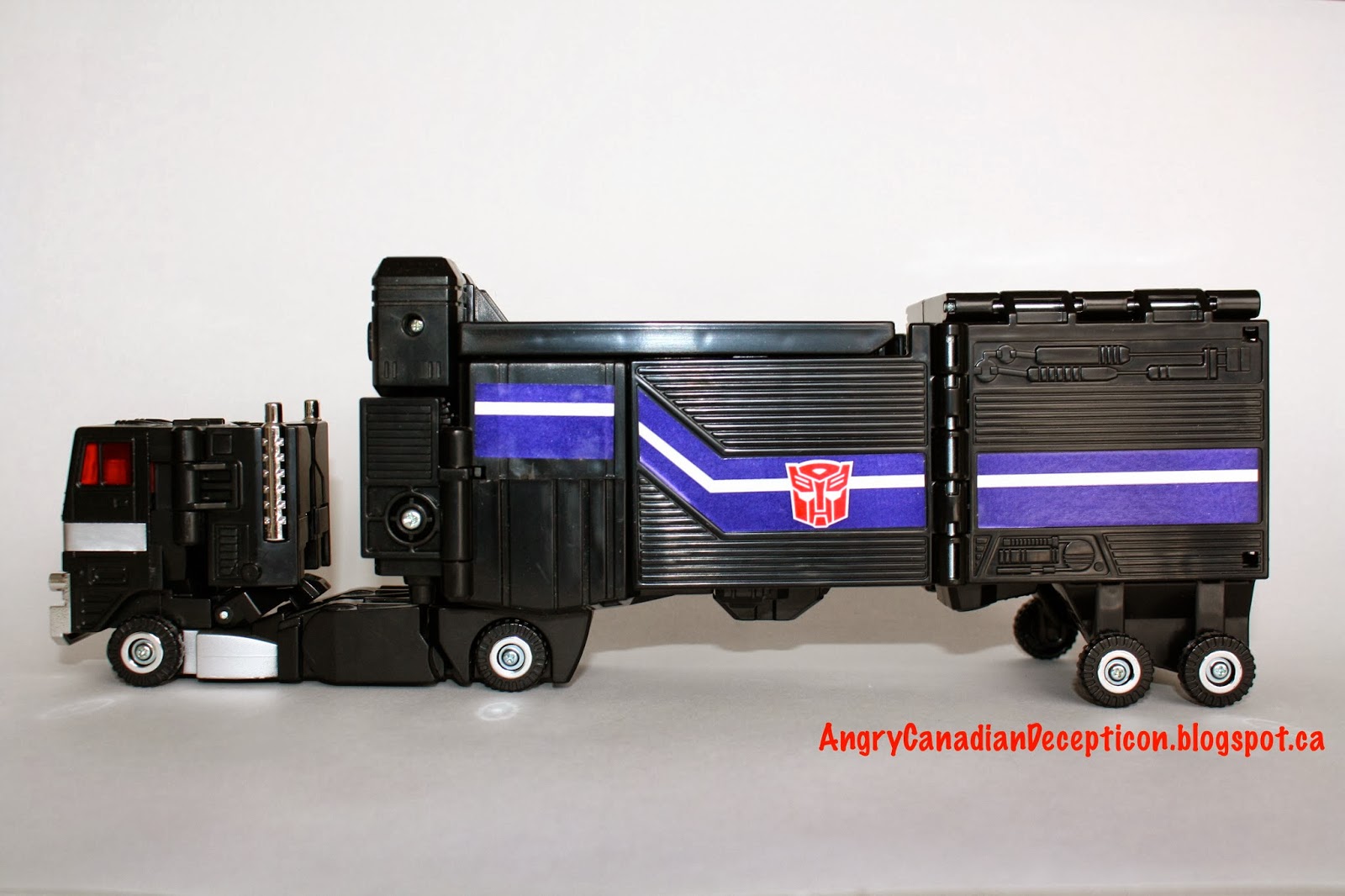 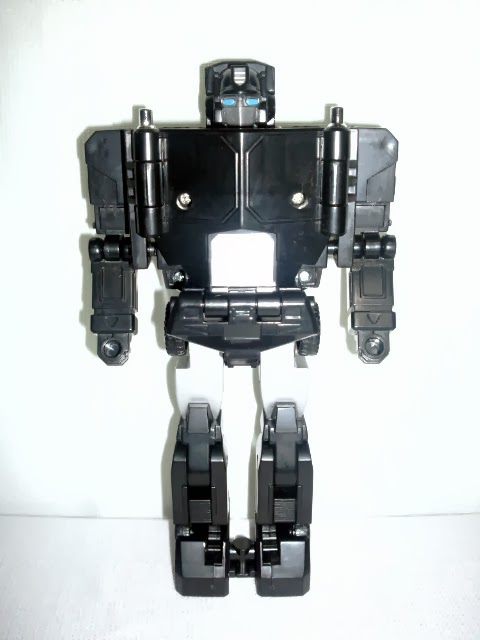 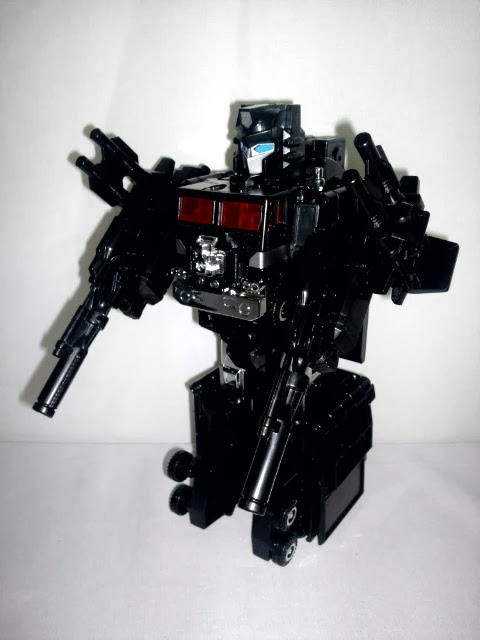 The main gimmick of the powermasters/masterforce figures is that you need to insert the engine (HI-Q) into the front of the cab to initiate/unlock the transformation.  If you do not do so, you cannot transform the figure (unless you know what/where to press or you want to break your toy 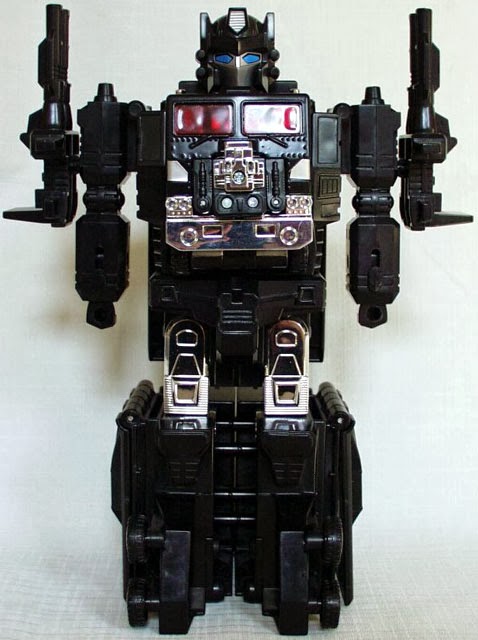 Here's a You-Tube video on the transformation of this figure: 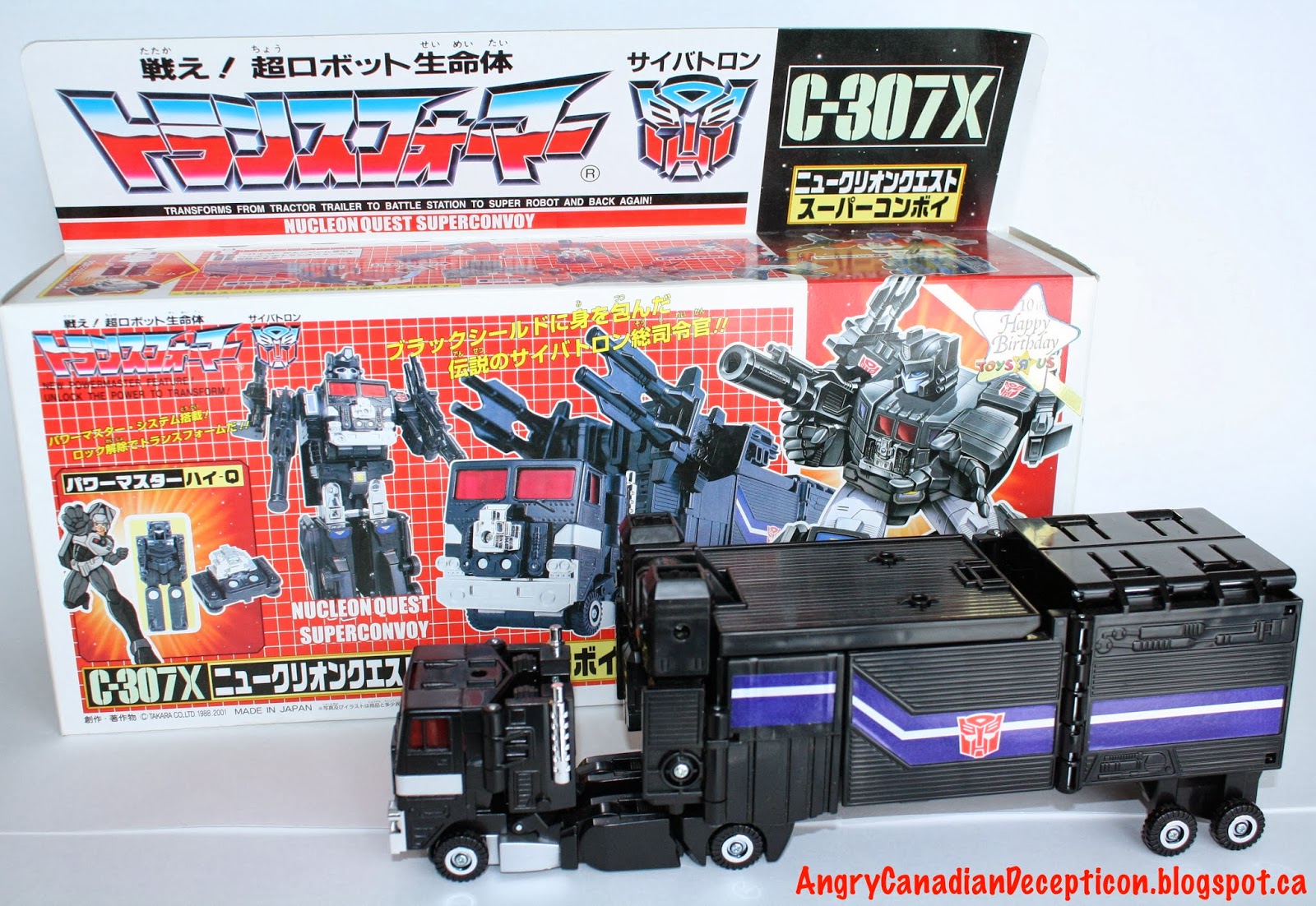 I had actually forgotten that "M" had picked this guy up since it had happened so far back, but now that I have taken the time to put this all together and really contemplate about this figure  I think I will be on the hunt for it myself.

I don't think that I need to have every variation of Prime out there, especially since my collection is not taking that kind of direction, and also because some of the newer versions of Prime are really bad, but I think anything that is, or has a real resemblance to him will be something I will try, or at least consider getting.

I do believe that these Masterforce versions of him are definitely worth having in your collection, at the very least in one form or another.  You saw from above the playability (aside from his lack of articulation) that this figure has four different modes; and with the base mode included I would even go as far to say that this guy could be compared as a much smaller scale as a smaller version of Metroplex…..maybe even more so if God Bomber had been included.


Posted by acdecepticon at 7:00 AM