I blame my friend "M" for getting me interested in these little guys.  Recently, he picked up 10-15 loose individual figures which he showed to me a few weeks ago.  I never really had much interest in collecting the Micromasters before so I'm not sure what really caused the change of heart. 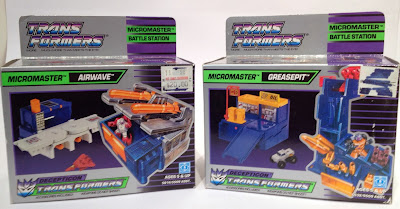 Maybe the attraction was that they were loose so I really could get a good look at them.  Most of my collection tends to be boxed and sealed so I don't enjoy it as much as I could, so
him having aloose figure I could play with may have triggered some deeper psychological longing in me.

So there I was trolling eBay when I came across these two sets being sold individually by the same seller.  He was asking $60 so I made an offer of $45 each with $20 combined shipping and the deal was done (and no piece of shit Global Shipping Program charge or I wouldn't have bought them).

I should note that when I give out my paying price, it's not a form of bragging or anything like that.  I just want to let people know what some of the going prices are for figures and hopefully that helps them in determining whether or not to go for a purchase themselves.  Of course, this is all relative if money is not a concern to you.  And lets also be realistic, there is NO reason for these guys to be commanding some of the prices people have them listed for on eBay. 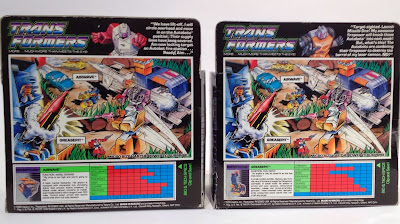 I was at home when I heard the doorbell ring.  By the time I got to the door, I saw the Purolator truck driving off and this box was sitting in front of my door!  I've complained about it before in my posts, and this tends to happen a lot more to my friend "M", but this is just ridiculous.  I'm not worried about it in my neighbourhood, but that's besides the point.  What if this was a expensive figure that I had paid for and it was just left like that?  I find this extremely frustrating! 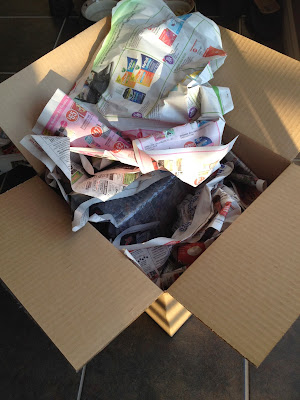 I cannot reiterrate it over and over again about how much I hate it when items are shipped with newspaper.  It's just such a cheap way out for sellers to provide good protection for shipped items.


Micromasters are Transformers with small and extremely fuel-efficient bodies. Some were created that way, others were created as ordinary Transformers (or guzzlers, as Micromasters sometimes call normal-sized Transformers) and rebuilt into Micromasters. Transforming into (usually) tiny cars, planes, and other vehicles, they are depicted as roughly human-sized in robot mode in most continuities.
Some Micromasters are also Combiners. One kind are the Micromaster Combiners, who can each form either the front or back half of a combined vehicle. They are not constrained to joining only with their Combiner partner; they can join with any other as well as to the back of any Micro Trailer.

Each Micromaster stands about two inches (5 cm) high in robot mode, making them the smallest Transformers released to that point (since surpassed by a few members of the Smallest Transforming Transformers line). Many share a standardized transformation scheme of "flip out rear of vehicle to form legs; swing up arms from side." Articulation is generally limited to swiveling shoulders and knee joints (the latter limited by conjoined uni-feet). 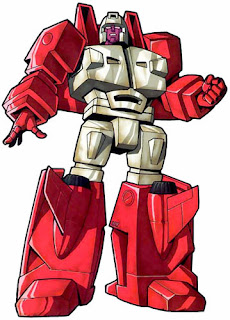 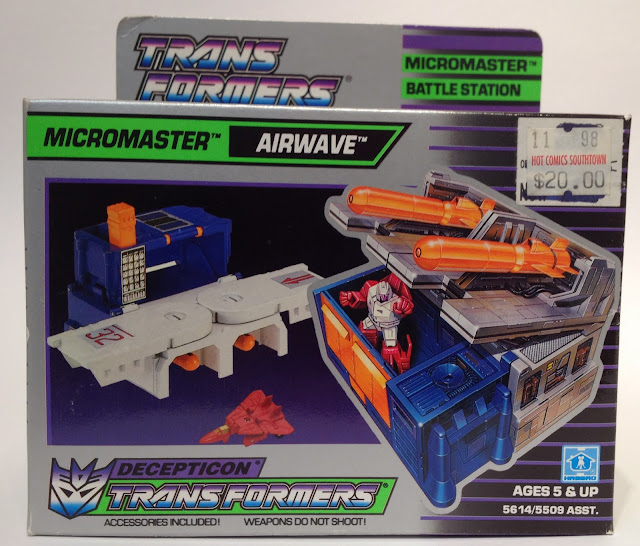 He was sold with an airport hangar that transforms into a missile base and can connect with other Micromaster bases via modular ramps. 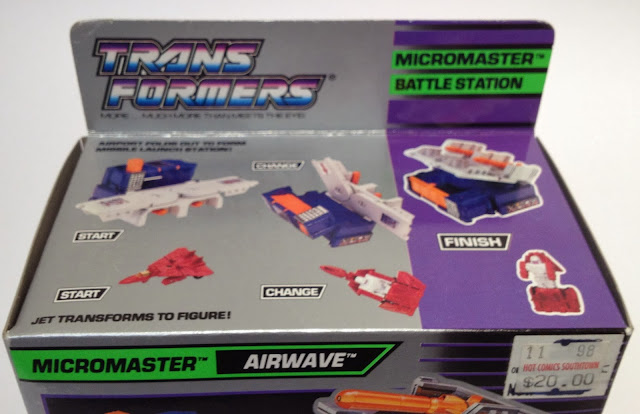 This mold was released without changes in Japan as Overair. It was also used to make the Zone Autobot Nightflight. 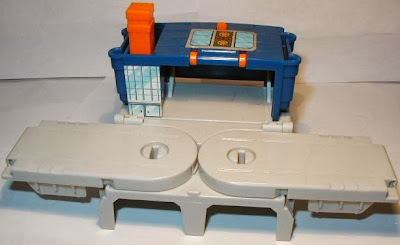 The airport was sold in a small boxed package along with Airwave. Its ramps allow it to connect to other Micromaster bases to form larger "cities", and it features an opening garage large enough to hold a vehicle-mode Micromaster. 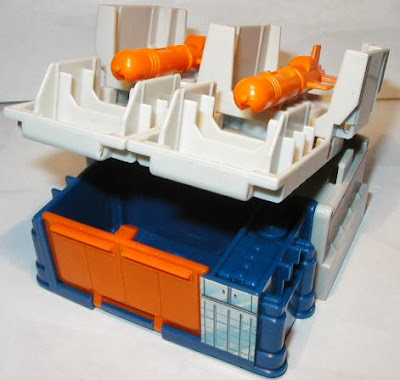 In its attack mode, it sports two orange "missile launchers" concealed beneath the ramps. Airwave can ride inside a small bunker formed by the upside-down garage. The airport is unique among the micromaster bases in that it can attach up to four ramps.

The airport was released in Japan the following year, without changes, as the Autobot Overair's Airport Base. 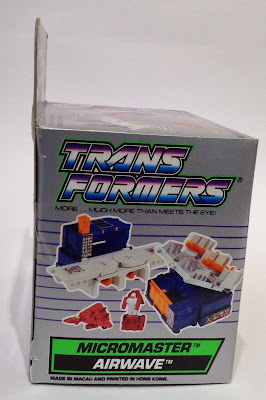 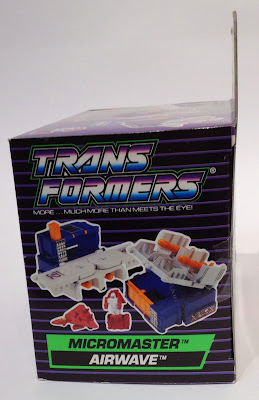 Still nicely sealed and no flap creases which is mandatory for me in a box.﻿ 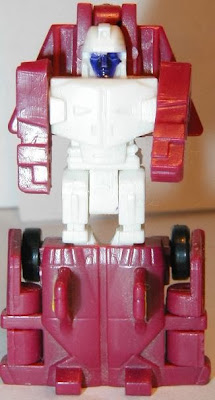 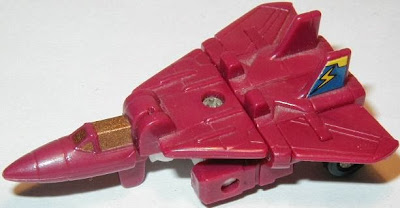 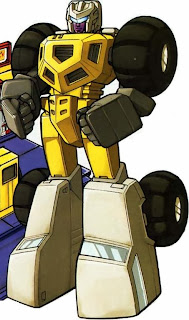 Greasepit has the power to surprise. In his case, the surprise comes to a hapless Autobot or Earth motorist who attempts to refuel at his small gas station. All will seem well at first as the poor sap purchases the "Super Gasoline Z-1" so proudly advertised, and pays the holographic hippie burnout at the counter. A few miles later, he'll grind to a halt, his tank siphoned bone-dry, and his circuit-scrambled gauge still pegged at "FULL".

Some do complain, but Greasepit has a counter-argument. His transforming gas station is fitted with incendiary-launching railguns, sonic blasters, and an ion cannon, so he generally wins such debates, so long as he isn't required to actually fire these big guns. It takes a lot of stolen gasoline to pay for a single railgun shot 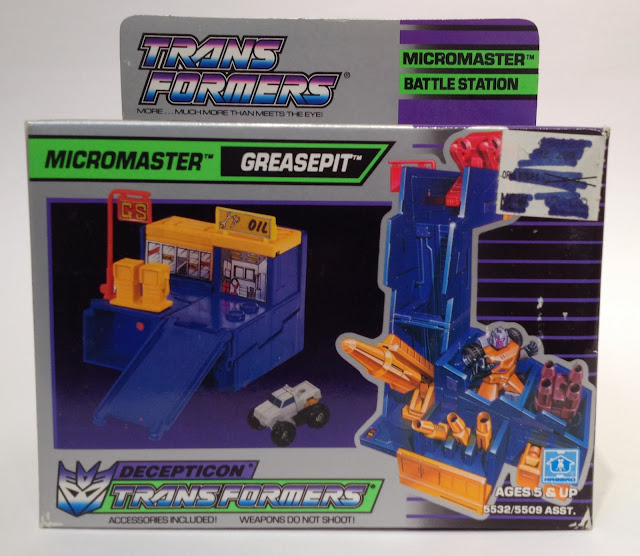 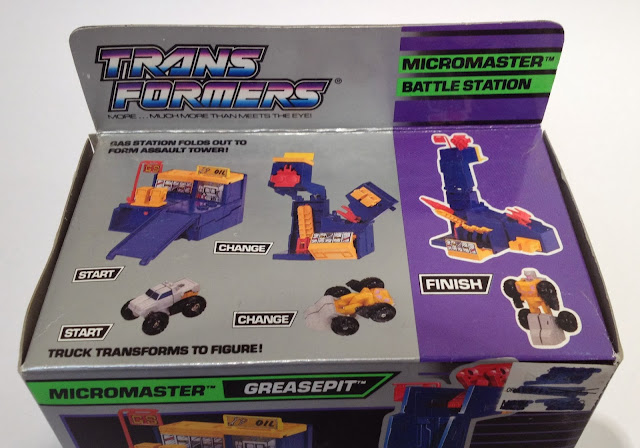 The stations are big bases commanded by a single Transformer and disguised as human buildings. 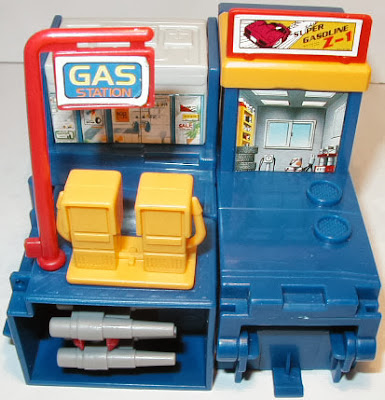 The gas station was sold in a small boxed package, along with Greasepit. Stickers along the "building" portion simulate the inside of a garage repair bay and a convenience store, and advertise Super Gasoline Z-1. Two simulated gas pumps and a "Gas Station" sign complete the operation. Battle mode reveals a quad-gun, three blaster cannons, a non-firing missile and floodlights, plus the "GAS" sign becomes a radar panel.

Ramps allow the gas station to connect to other Micromaster stations to form larger "city" complexes. 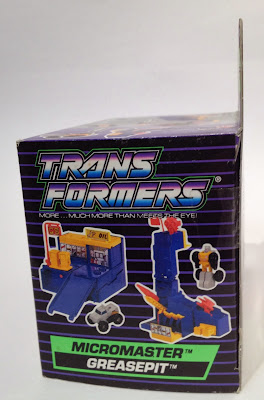 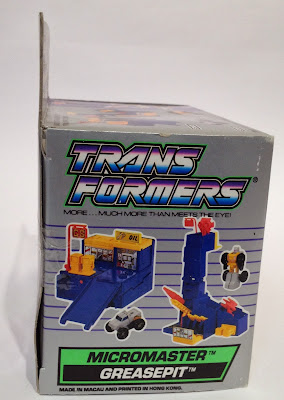 In Japan, the station was sold without changes as the Autobot Glasspit's "Gasoline Base". 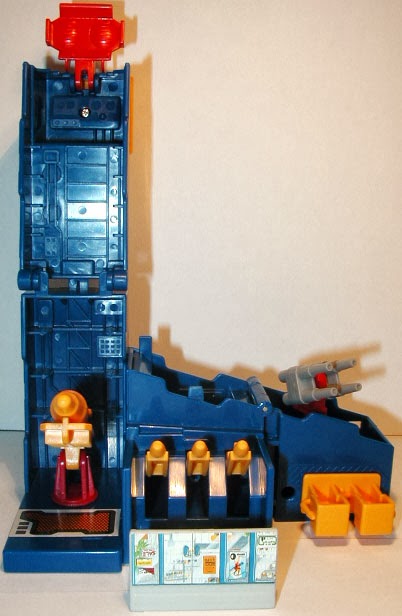 Greasepit is a redeco of Mudslinger, turning into a monster pickup truck. He was only available with a gas station base which turns into a battle station. Like most larger Micromaster toys, it came with extra ramps to connect it to other bases. 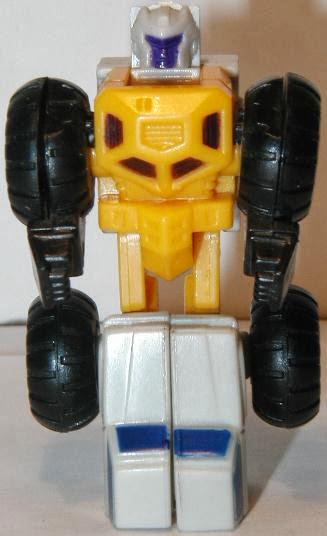 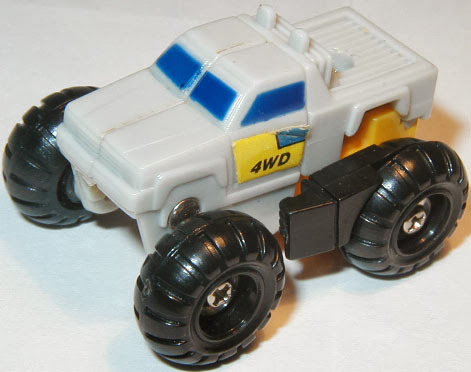 "Thecollector75" also has a nice you-tube review of these two sets if you would like to see how they transform.

Like the tag line for these guys says, "MICRO SIZE HAS THE POWER TO SURPRISE!"

I certainly was pleasantly surprised myself when introduced to this "little" line in the Transformers family.  To my friend "M", "Thanks for making me spend more money....and for making me realize what I was missing in my collection.