So here comes another addition to my blog from an impromptu photo shoot.  I was visiting my friend "M" on our usual Friday Transformer get-together show and tell, and I was bringing over my G1 Micromasters Greasepit and Airwave since he hadn't seen them yet.   He had a few purchases arrive since our last visit but had not told me what because he wanted to surprise me.


Now there is a little bit of backstory to this purchase and on the "wrong" figure inside but I will get to that shortly.

First off, this is the Canadian version of Springer.   For "M", this is neither here nor there.  And yes, it's just Springer…as it should be.  NOT Autobot Springer or some other bullshit for lack of Trademark.

Hasbro began to include glow in the dark posters with many of their Transformers toys as part of the lead up to 1986 Transformers: The Movie. Many 1985 toys were later available with the yellow triangle in the corner advertising the poster and sweepstakes.  Most of the 1986 toys started out with this offer, and were then later available without the offer.

﻿
There were 4 posters in all, each a part of a larger scene shown on the back (all four had identical backs).

﻿
POSTER STORY : Decepticon Cyclonus (1), transformed from a futuristic jet fighter plane, delivers a low blow to Hot Rod (2) as Superion (3), the Aerialbot super robot, counterattacks.  Watch out for those viscious Sharkticons (4), Hot-Rod!  They can tear through solid steel!


The Hot Rod Go-Kart is the supposed holy grail of many Transformers Artifact collectors. This is the first that I've heard of it, nor have I been able to find any detailed info or pictures on it.
POSTER STORY : It's the struggle of the super powers!  Defensor (1), the Protectobot super robot made up of five emergency vehicles battles alongside Ultra Magnus (2), the Autobot City Commander.  Their foes are Trypticon (3), Bruticus (4), the Combaticon super robot, and the Decepticon Triple Changer, Octane (5), who changes from oil tanker to plane to robot. 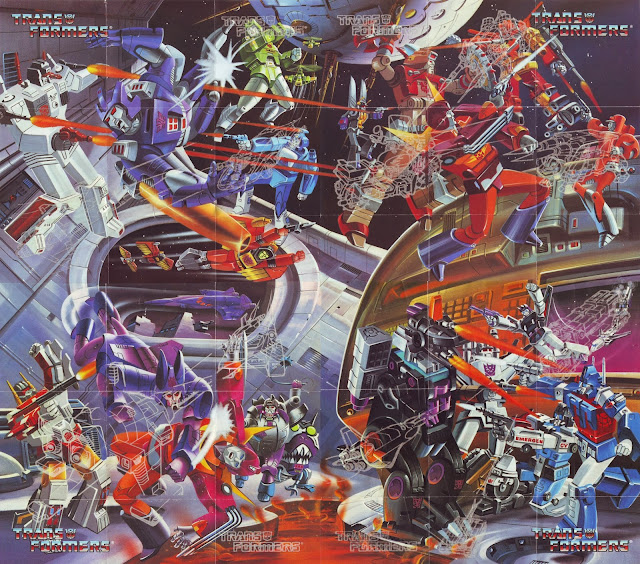 *Whew!*  That was supposed to be a little detour that turned into a big one.  To be honest, I never really looked into that whole contest before, but I'm glad that I finally did.  Credit goes to Lewis M. Brooks III for putting the above contest pictures online for the TF community.  Okay, now back to the overall box. 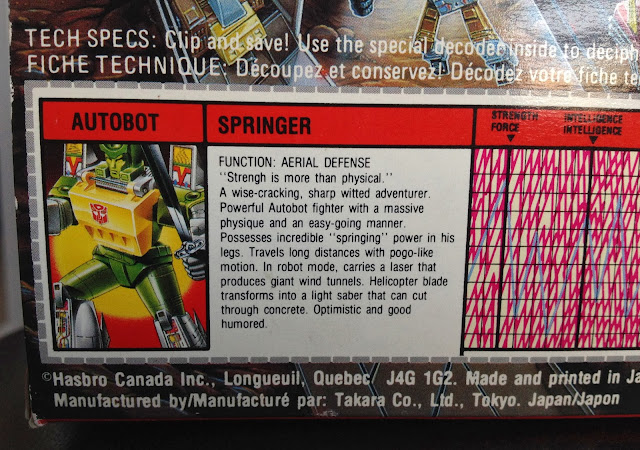 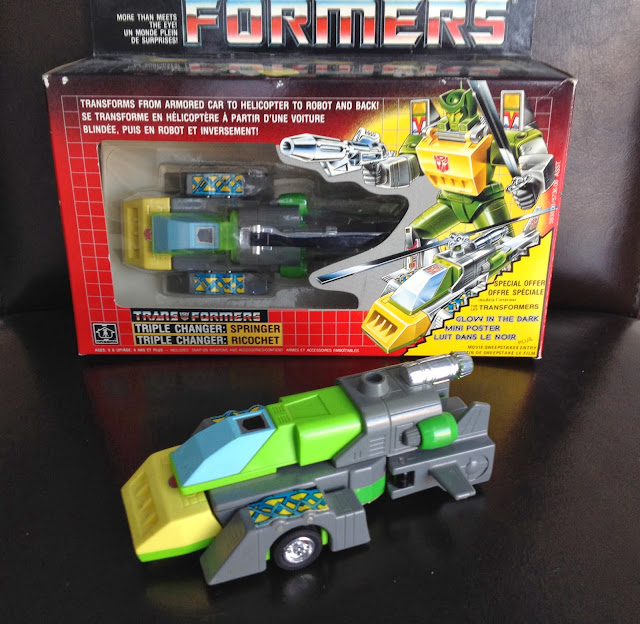 The G1 PLASTIC CHEST VERSION is actually the one that belongs in this box.  "M" bought the box, complete with all accessories, along with the plastic chest Springer mainly for how nice the box was even though it was missing the blades for $150.

For his own storing purposes, he put his MINT metal chested G1 Springer into the box for safe keeping.  I don't blame him either.  He's not going to sell the plastic chested one and finding blades for it is easy enough.  Either way, he has himself a complete piece. 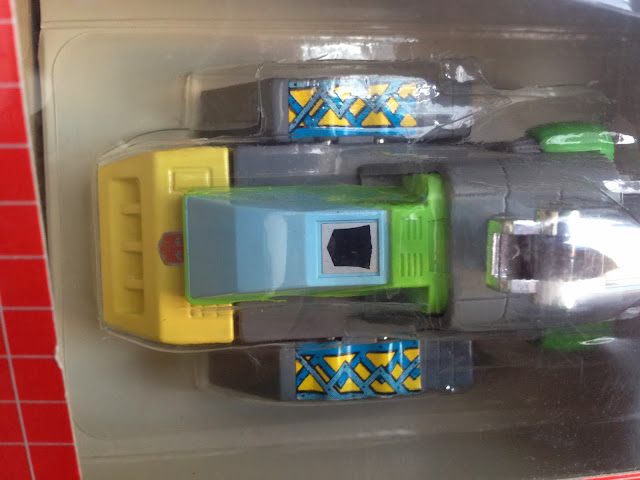 Close-up of the G1 Springer with metal chest.  I didn't bother with pulling it out of the box because of how everything was packeged back in, but rest assured, THERE ARE NO CHIPS AT ALL on the chest.  For those of you that have this version of Springer, I'm sure that you can attest as to how easily the figure can fall over and chip.


Couldn't have said it better myself Springer!  For myself, I've have some hunting on eBay to do.

Stay tuned for two more pieces from this impromptu photoshoot......here's a tease....they are both Micro Change figures.