So as you can see from my previous post, something arrived in the mail on Friday…..and this was it. (Heroic Decepticon, not surprisingly, picked out what it was).

I've been looking for quite some time trying to find one in as good a condition this, and at a reasonable price of course. 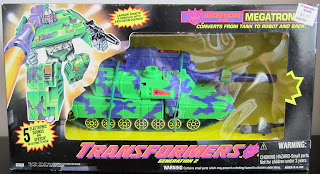 Final price eBay.....$144.  Unfortunately, as I mentioned in my pre-post, this particular
seller was one of those that subscribes to eBay Global Shipping Program so I had to pay (or bend over and get ripped off) an extra $38 for this completely useless program (as far as I am concerned).  I normally shy away from these extra fee charges, so if I see a seller charging this I just don't buy from them.  This Megs had such a nice looking box that I decided to just bite the bullet to be able to scratch him off of my want list so I went through with it. 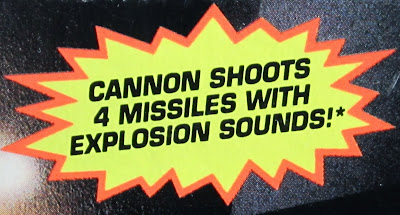 His main gimmick is his gravity-fed cannon, which holds four of his missiles at once (the remaining two can store in clips inside his legs) and can rapidly launch them one after the other. Pulling back on the cannon's tab drops a missile into the firing tube and triggers a "lock and load" sound effect, and pressing the launch button is accompanied by a firing sound effect. 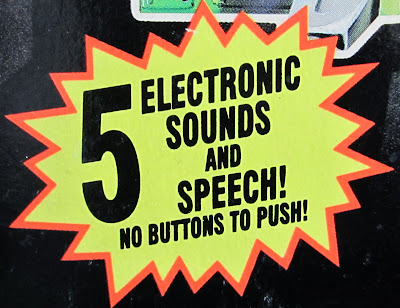 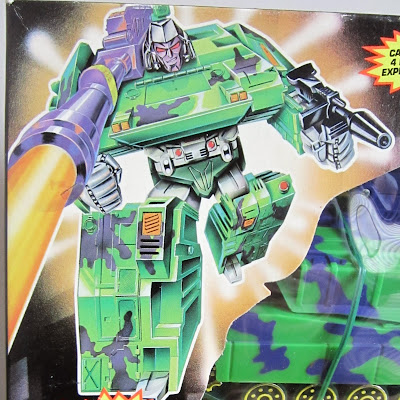 Megatron (Decepticon, 1992)
Accessories: Rifle, 6 missiles, sight
Owing to Hasbro's inability to re-release the original Megatron because that toy was a pistol, Generation 2 instead saw the release of an entirely new Megatron toy in 1992, now as a large green M1A1 Abrams main battle tank.

The M1 Abrams is an American third-generation main battle tank produced by the United States.
Highly mobile, designed for modern armored ground warfare, the M1 is well armed and heavily armored. Notable features include the use of a powerful gas turbine engine (multifuel capable, usually fueled with JP8 jet fuel), the adoption of sophisticated composite armor, and separate ammunition storage in a blow-out compartment for crew safety. Weighing almost 62 metric tons, it is one of the heaviest main battle tanks in service.
The M1 remains the principal main battle tank of the United States Army and Marine Corps. 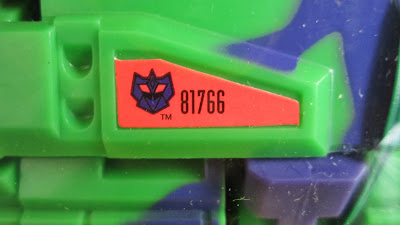 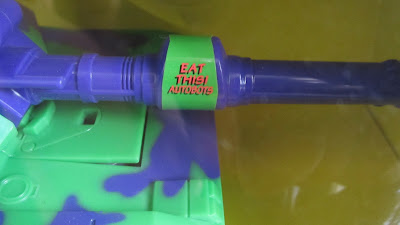 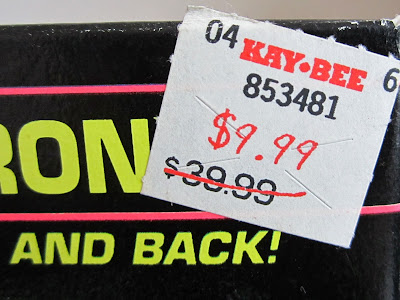 They really must have not been selling.  It must be a coincidence, but most of the G2 toys that I have, or have seen with their price stickers still on, have all been from Kay Bee.

I plan on leaving this price sticker on since it doesn't take away from the artwork. 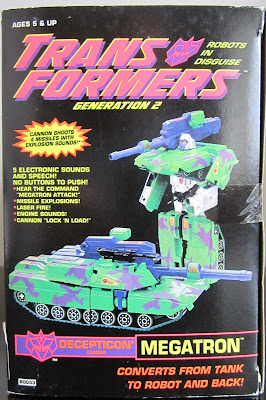 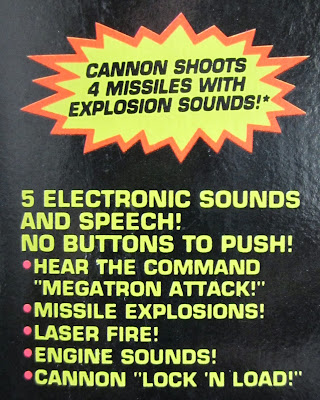 Pressing down on the tank body while it is on a flat surface activates engine noises.  In tank mode, pressing a panel on his forward section trigger's the toy's infamous battle cry of "Megatron Attack!" 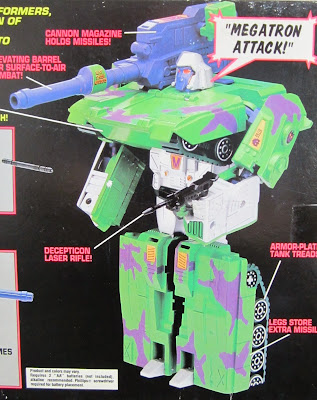 In robot mode, Megatron is, by the standards of the time, a very large robot, towering over all Generation 2 incarnations of Optimus Prime. His legs are immobile, but he has upper shoulder rotation and elbow joints. 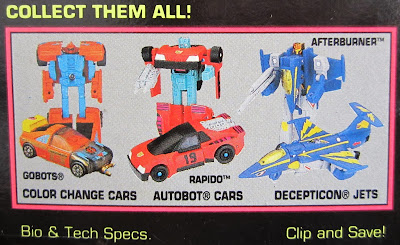 Because of this early product, and particularly because of the radically redecorated Aerialbots and Combaticons, Generation 2 is sometimes inaccurately and unfairly remembered by fans as consisting solely of garishly recolored Generation 1 toys. As the line continued, however, numerous new molds and play features were introduced. Among them were:
These last groups also featured unprecedented articulation.

The final year of Generation 2 saw many of the toys in its line packaged on cards that did not carry the "Generation 2" subtitle under the Transformers name. The two most prominent lines under this banner were the Cyberjets (3 small jet fighter/robots in 6 color schemes with ball-and-socket joints when transformed to robot mode) and the Go-Bots.

The Go-Bots were 1:64 scale cars (compatible with some Hot Wheels and Matchbox tracks) that transformed into equally small robots carrying guns. Although there were 6 different car models used to create them, each car transformed similarly with only details setting them apart. There were about 15 different Go-Bots produced, with several seeing color variants due to a partial tooling change (to accommodate newer Go-Bots being modeled after classic G1 characters). Despite the 3 Cyberjet molds being sold as 3 Autobot and 3 Decepticon characters respectively, 2 of the Autobots (Jetfire and Strafe) were decaled with G2 Decepticon emblems on their tailfins. 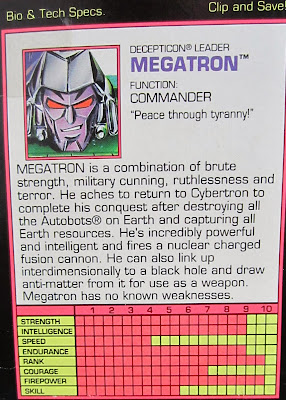 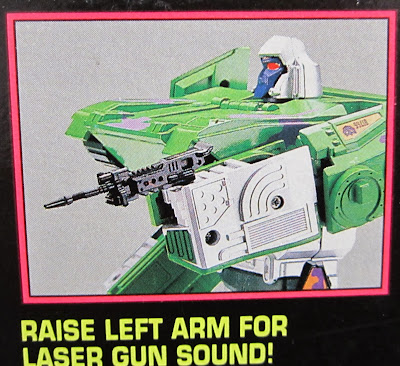 When raised, his left arm triggers an electronic laser sound effect. His cannon and all its sound effects still work in this mode, as does his "Megatron Attack!" sound effect, now triggered by pressing down on the figure's head. 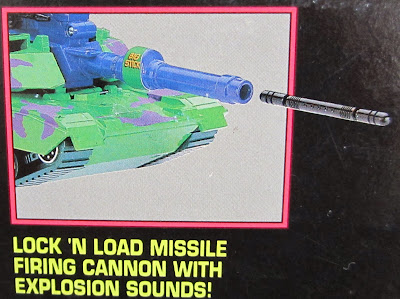 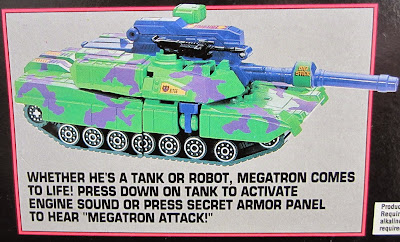 Luckily, toys that came out at this time period mostly came without the batteries included.  I would have hated to had battery corrosion on this guy.  I had a few newer figures that still have their batteries installed so I need to get around to opening their boxes and remove them. 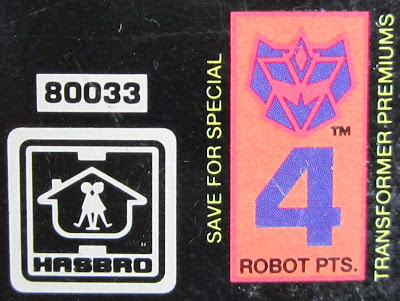 What you could buy with the G2 Robot Points. 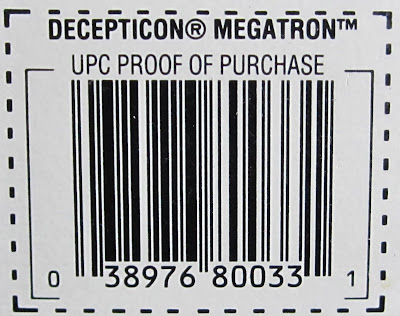 Tonka is an American toy company best known for its metal toy trucks and construction vehicles. During the 1980s they also marketed GoBots, the biggest competitor to Transformers during Generation 1. Tonka was eventually bought out by Hasbro, and some GoBot-related trademarks (including the name "Go-Bots") have since been reused within the Transformers franchise.

In April 1991 the deal with Hasbro was finalized, and Tonka was bought for just less than $490 million. Tonka was folded into the Hasbro stable of companies, operating out of Hasbro's Pawtucket, Rhode Island headquarters. 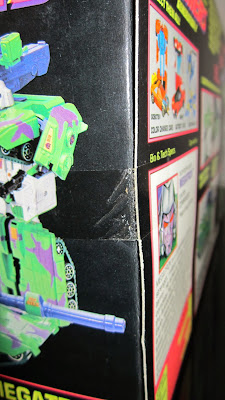 Still nicely sealed from what looks like to me, to still be the original tape. 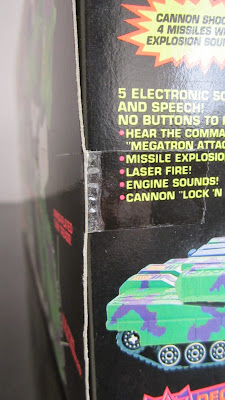 I would love to get myself a loose version of this eventually, but for the time being, now that I have this one I need to focus my budget on getting figures I don't have.

The scope of G2 figures that I want in my collection is very few.  Other than my previous postings of my G2 Constructicons, & Jazz, I only want to get Optimus, Starscream, Sideswipe, Grimlock, Slag, Snarl, Ramjet, the Aerialbots and the Combaticons.

Is this version of Megs worth purchasing?

Granted I'm not crazy about him being a tank as I think his only true form should be the gun, (he's not some alligator, or T-Rex or what whatever other forms they made him into), but it is the last form of Megatron that I think really encompasses that same mentality and destruction that his original G1 form was meant to exemplify.

Posted by acdecepticon at 9:58 AM