I was lucky enough to stumble across this listing for a complete lot of 6 MOSC G2 Orange Constructicons along with its 5 Crazy Devys Most Wanted add ons back in 2012 from eBay.  I can't remember exactly, but I do remember talking him down in price as well.

An awesome and terrifying combination of all six Constructicons; Scrapper, Scavenger, Bonecrusher, Hook, Long Haul, and Mixmaster, Devastator is purely brutal and his main
function is to crush all in his path. While his mind is a melding of his six individual parts, he is hampered by their competing thoughts. He possess' incredible strength and carries a 10,000 degrees Celcius solar energy beam rifle.

In the Dreamwave comics, Devastator was the first combiner due to the end result of the Constructicons' research into mass intellect.  One end result was that he would only do what his components agreed on, which was usually smash stuff. None the less, Megatron was pleased with Devastator's power, and authorized the Stunticons and Combaticons to undergo a similar process.

For centuries, the Transformers worked on the project of mass intellect, the fusing of multiple minds and bodies. However, all those experiments were failures, as the electro-neural meshing was hampered by the presence of strong minds without drowning any weaker ones out. During the Great War, the Constructicons finally succeeded where others had failed, stabilizing the electro-neural meshing with a hyper-processor vortex. They tested the theory on themselves, and the result was Devastator. While a success, the mass intellect was hampered by a need for Devastator's components to agree on a course of action. This difficulty caused the combined form to suffer from a "dumbing down" problem. Although it could be considered a failure, Megatron was pleased with Devastator's power, and commissioned further studies into mass intellect. Transformers: The Ultimate Guide

During Generation 2, the Constructicons were only available as individuals, as opposed to the earlier giftset ones.  Released in two different colors: initially yellow and then later in bright orange.  Individual members were tampographed with the G2 Decepticon symbol and the word "Decepticon". It has been rumored that the later orange version was exclusive to KayBee stores.

G2 Devy is almost functionally identical to the original release with the exception of the quality of the plastics used, though his forearms and fists were retooled to completely remove the spring-loaded firing gimmick.

Devy is composed of these six Transformers... 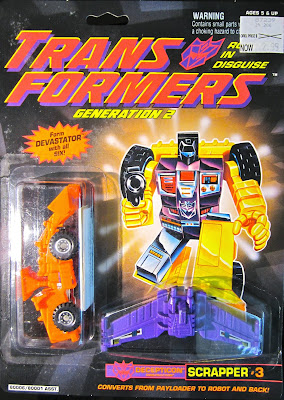 The engineer of the group, Scrapper designs everything for them with his designs being among the best by any Transformer.  While modest in receiving praise, Scrapper is still a complete nutcase. One of his favorite artistic liberties with his designs involves taking living Autobots and using them as raw materials. This vicious act is something Megatron finds admirable, as he considers Scrapper the most valuable of the Constructicons. 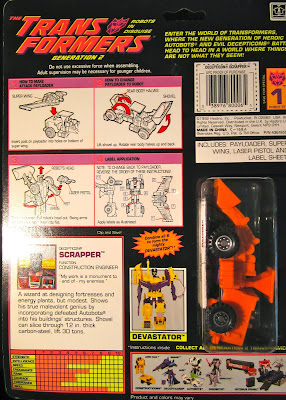 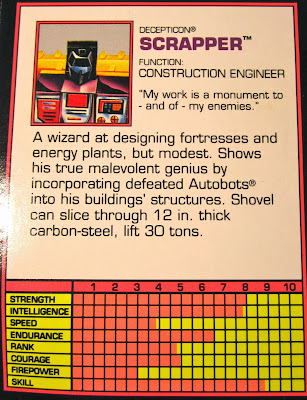 The complete set of Constructicons were re-released and redecoed as part of the first assortments of G2's.  The first and more common versions were yellow with bright purple parts, had the "DECEPTICON" tampographs on each one somewhere.   Later this less common run changed the yellow plastics to rich orange. 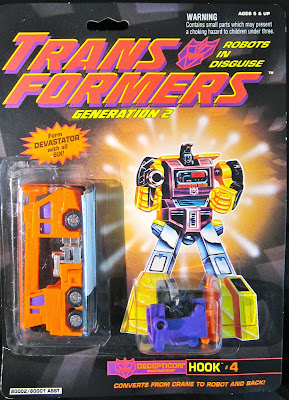 The snob of the Constructicons, he considers himself an artist while looking down on the rest of the Decepticons.  As a master craftsman the high standards that he holds himself and others to means he takes extra care to ensure even the most simple of jobs is completed to perfection.  While Megatron acknowledges Hook's incredible skill, he gets impatient with the time it takes Hook to finish his work. Hook cannot understand the frustration at the delays this causes, he just sees it as doing the job right. 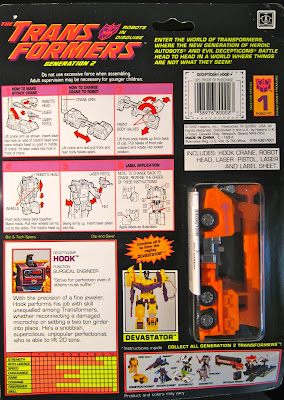 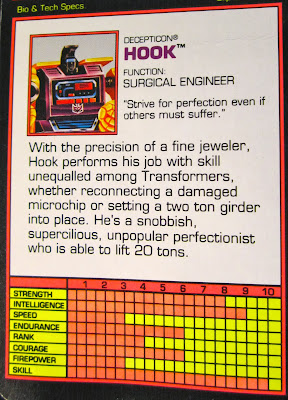 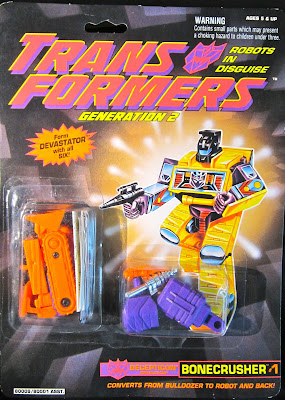 Finding beauty in rubble-strewn wastelands and longs to transform pretty much any location he happens across into one, Bonecrusher makes demolition into art. He loves to show off his destructive talents for his fellow Decepticons. Deep down, his destruction is really a perfectionism that cannot tolerate anything that he views as flawed, which including the Autobots. 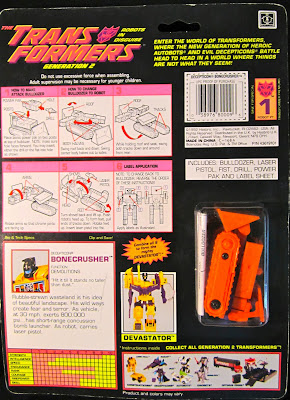 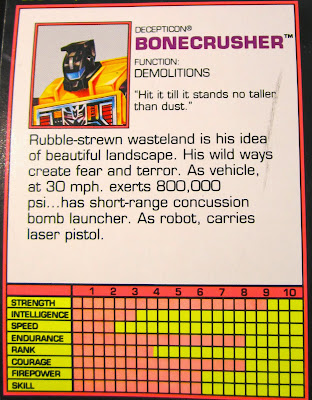 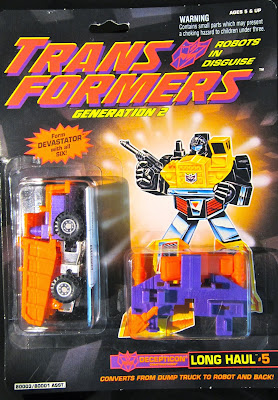 He gets all the work and very little of the excitement and the glory that goes with being a Decepticon. He knows his job is important; he'd just much rather be on the front lines fighting shoulder to shoulder with fellow warriors than moving supplies and building installations to make sure those warriors continue fighting. 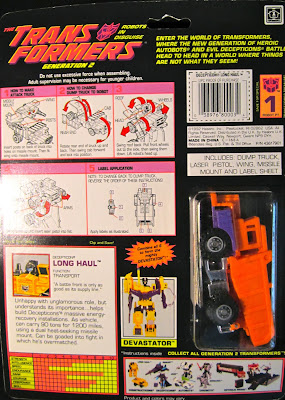 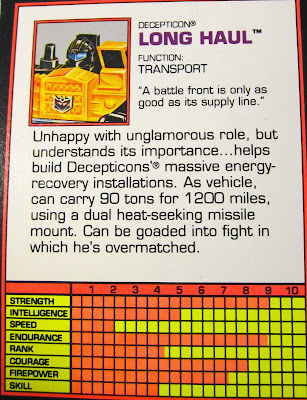 Unlike the 1992 release, he comes with all the parts included with the original 1984 release. 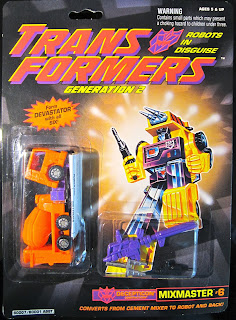 Nothing is safe. From raw ore to living robots, it all goes into Mixmaster's grisly drum where it's reduced, refined, and recombined into virtually any raw material the Decepticons need. Watching Mixmaster prepare a new batch of materials is like seeing some mad alchemist at work, giggling and cackling over his creations with evil glee. It would be a stretch to call him a scientist; a better comparison would be to a witch throwing arcane scraps into her cauldron to complete a bubbling potion. His fellow Decepticons suspect Mixmaster of having a few wires loose in his logic center, but they can't argue with the results. He transforms into Devy's left leg. 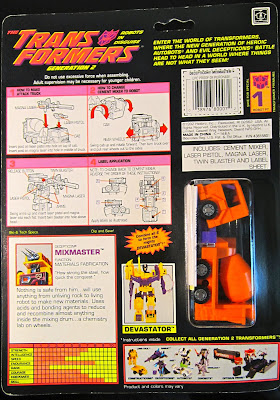 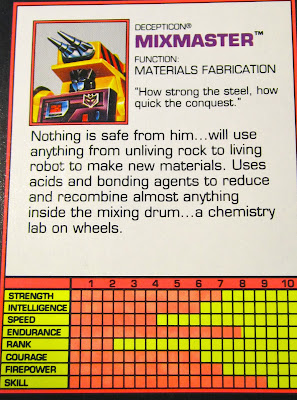 The missile launcher mechanism was removed for this release, as was the single-tipped missile. 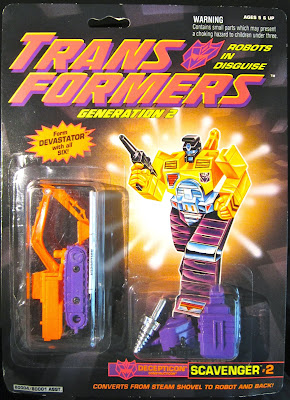 Scavenger wants so badly to be liked and needed, to feel like a useful and valuable member of his team. His self esteem is so low he'd do just about anything to get the approval of the others, but his simpering, doting eagerness to please just reinforces the other Decepticons' opinion of him as a worthless loser. He's constantly excavating everywhere he goes in the attempt to find something of worth to please everyone and prove his value, but it's invariably just some piece of garbage or scrap he excitedly finds, and that just reinforces their opinion of his worthlessness once again. If it wasn't for his shovel's unique ability to detect needed materials, Megatron and the others would likely have dumped the poor scrub long ago. 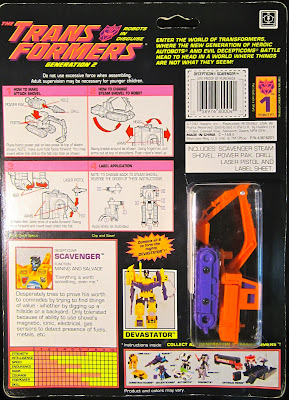 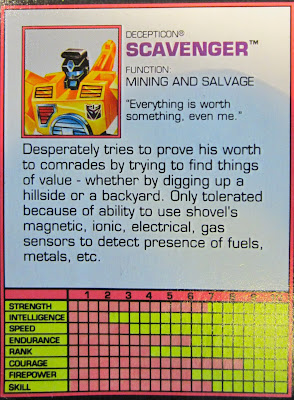 I think this is such a fantastic set, and I bought it more for the pleasing asthetics of the artwork more than the rare/completionist aspects of the set.  Is it G1...no, but the fact that it's a redeco shouldn't make it anymore less valuable considering the quantities of them MOSC out there.

...to be continued next in G2 European Exclusive Constructicons - Devastator Part Deux

Posted by acdecepticon at 11:25 AM