In continuation of my Devastator theme, here's another set that I picked up earlier this year.
$14 each + $2 shipping....all in all, I would say a good price .

These European-exclusive versions of the Constructicons are yellow, but with the darker purple from the original toy instead of the lighter Generation 2 shade, with a few

having grey parts, but none come with any Devastator parts. Each figure was also not individually named on their respective cards, instead sharing the same card by the other Constructicons. 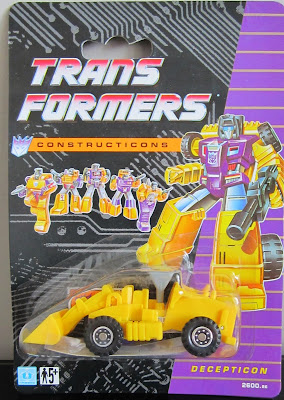 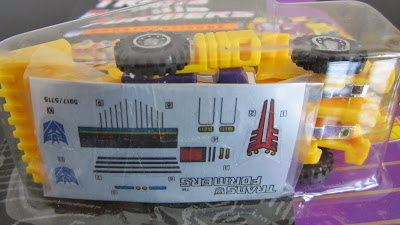 Scavenger
Scavenger turns into a power shovel (or steam shovel). This European-exclusive version of Scavenger was yellow, but with the darker purple from the original toy instead of the lighter Generation 2 shade, a grey shovel arm, came with no Devastator parts, and also lacked the tab on his chest.
﻿
﻿ 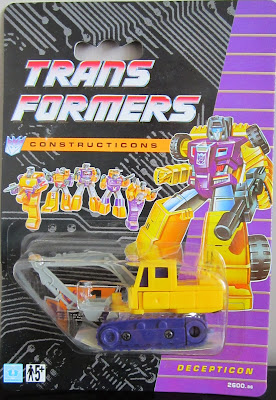 He transforms into an excavator.
Desperate to prove his worth to his team-mates, he uses his one true gift - his shovel's ability to detect various magnetic, ionic, electrical or gas readings - to locate items of value, although invariably, all he can usually find is junk. 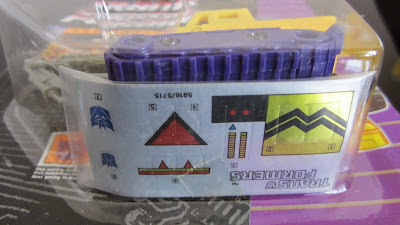 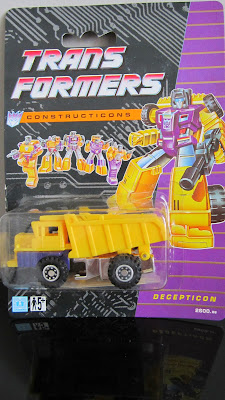 This European exclusive version of Long Haul was yellow, but with the darker purple from the original toy instead of the lighter Generation 2 shade, and came with no Devastator parts.

He transforms into a dump truck.
He is not fond of his role as transport, ferrying construction materials to and from on a Constructicon building site, and although he accepts its importance, he would much rather be a full-time warrior. 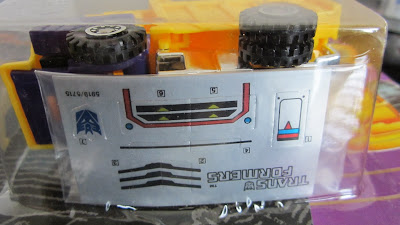 This European exclusive version of Hook was yellow, but with the darker purple from the original toy instead of the lighter G2 shade, and came with no Devastator parts. It also lacked the peg used to connect with Bonecrusher. 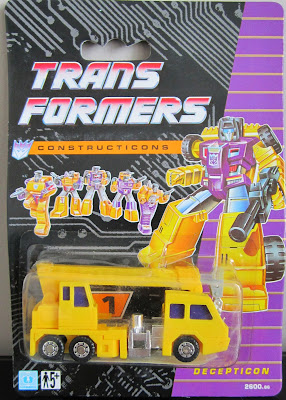 He transforms into a mobile crane.
He is the team's perfectionist second-in-command.
He is excellent at performing tasks which require extreme precision (including surgical operations), but the time he takes to perfect his work and his arrogance are his weaknesses. 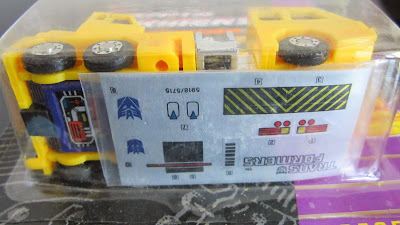 He transforms into a bulldozer.
He is a brawler by nature and specializes in demolitions work.
Under this vicious personality is an underlying motive; he is a perfectionist at heart and wishes to destroy all he deems imperfect, including the Autobots. He would enjoy the extra potential for destruction as Devastator if it did not mean sharing the same mind space as his fellow Constructicons. 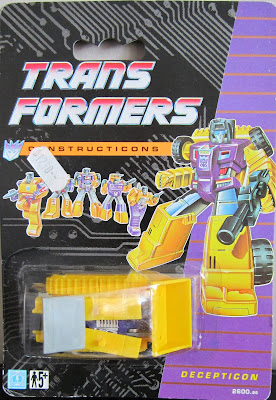 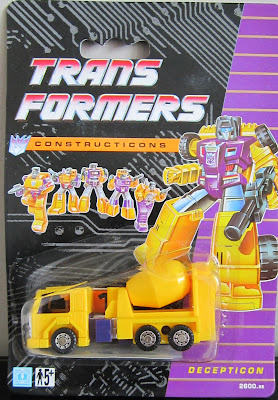 He transforms into a Concrete mixer truck.
Although manic and erratic by nature, he is a genius of a chemist, able to mix chemicals in the drum of his concrete mixer alternate mode.
He has also been known to insert solid objects—such as cars—into his mixing drum in order to turn out new building materials. 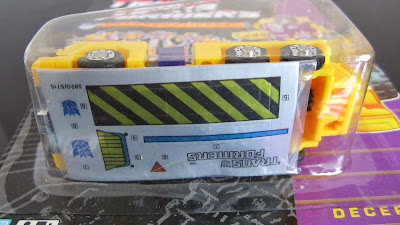 I wish they had done more with the instructions but in the name of saving money, they just incorporated all six figures onto the back of every card.

So here we have the usual copyrights showing these are a 1991 Hasbro U.K. release.  Made in China.
Safety warnings are in Spanish and Greek.  I've seen some eBay listings for these guys claiming Greek versions but if I remember right, I don't recall any difference in what the packaging looks like.

In the end, what can I really say about this particular set.  The artwork on the packaging is definitely not as vibrate at the G2 orange/yellow sets. No effort was made to really individualize the separate figures on their respective cards. No tech data on the back of the cards.  Most importantly......these guys don't combine together to form Devastator, which lets face it, is the reason why we buy the Constructicons right?

So....should you buy this set?  The above paragraph sure as hell doesn't help convince you in that department.  So what would?  Well, while it may not be able to combine in Devastator, these guys are still individually the Constructicons, and with that, have their own quirks, personalities while still looking great in their robot modes.

If you're a completionist, this set fits into a few categories to consider them complete; Gestalt (though this set doesn't combine), Devastator/Constructicons and G2.

Personally, I bought this because the price was really good, I liked the idea of a few pieces having grey parts, and I wanted to eventaully complete my Devastator collection by having this set with my other G2 orange and yellow carded sets.

Posted by acdecepticon at 9:56 PM