Finally pulled the trigger and found this guy from a local dealer....and at a reasonable price; $185 all in.

﻿ Convoy (2003)
I know some of you may be saying, "How can yet another reissue of Optimus Prime be so expensive?"  I can't really debate that argument as much as I would like to.

Let's look at a few negative factors:
And now a few postives: 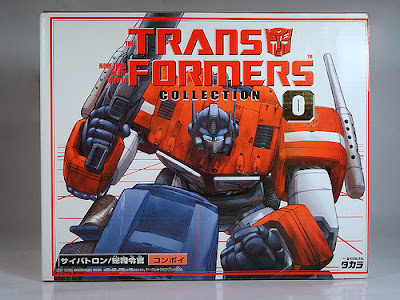 ABOVE : #0 Convoy's (Optimus Prime's) artwork is taken from Pat Lee's old "movie" posters that served as teasers for DW's first "Generation 1" mini-series.
BELOW : You can see the similar signature in character designs on the two comics below compared to the TFC box above. 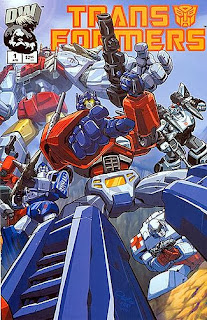 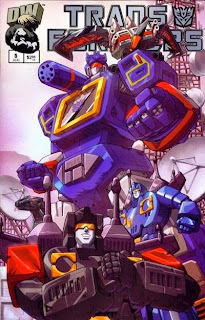 Directly associating the line with Dreamwave is a little incorrect though since about half the box artwork has in fact been drawn by Japanese fan-turned-pro Hirofumi Ichikawa who has never worked for Dreamwave. Fans, as well as auction sellers, still frequently use the abbreviated name "DW" to refer to the reissue toyline to this very day.
Produced by Takara between the years 2002 and 2007, The Transformers Collection (also abbreviated unofficially as T/F Collection or TFC), is one of Takara's series of Generation One reissues. Each figure comes inside a "book-box"-style package that opens just like a large book, complete with a small booklet containing profiles of the reissued character (and a couple of random characters), episodes of the cartoon and a small portion of the Japanese catalog.
Though you would think this was Takara's first release of the series (#0), and why wouldn't you think that since it's Optimus, you would be mistaken. (At the time of writing this, I can't remember exactly what figure Prime was released after, but I'm fairly certain it was after Skids & Tracks.)


Here's the release date of this line: 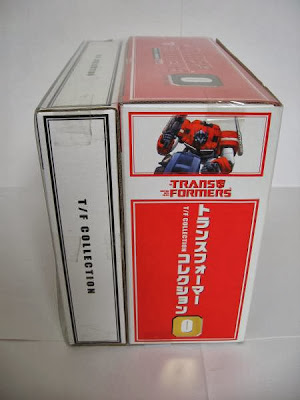 Side profile of figure box on right (red box) with the binder box on the left (white box).
﻿ 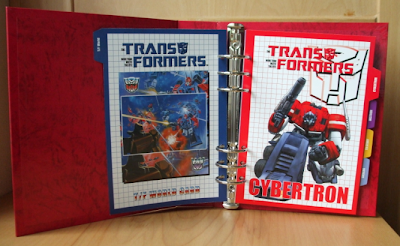 Each bookstyle box comes complete with a small booklet containing profiles of the reissued character (and a couple of random characters), episodes of the cartoon and a small portion of the Japanese catalog. All 22 of these can then be removed and inserted into this one binder.

I'm only have 10 of these boxes in my collection so far, but I'm getting there.  It's just getting harder to find them in the condition that I look for.

Reissue or not, this is a fantastic release of one of the most iconic figures in the Transformers line, maybe even ever.