Have you ever bought a toy just for the name alone?

So it was sometime back in 2012, slightly over a year since I got back into Transformers collecting, and I believe that I was just goofing around on Kijiji when I came across a
dealers posting and saw the pic for this figure.

NOTE: (I had been out of collecting for quite some time and when I was prior, it was mainly focused on the North American G1 line).

I wasn't familair with the name, but anything called Fire Guts GodGinrai had to be badass.  I Googled a video review of this figure and fell in love immediately.  After emailing the dealer, we arranged a meetup after my work and I picked the figure up under the radar (a term we use when the wifey wouldn't approve of a purchase).

I believe this is the review I watched :

A Transtector  is a non-sentient Transformer body controlled by a smaller being.

During the Cybertron wars, many Transformers evacuated the planet to escape the conflict. The  diminutive robots led by Fortress Maximus, crash landed on the planet "Master", where hazardous environmental conditions caused the deaths of the majority of the group over the years. The need for survival fostered several technological advances, not least of all the invention of larger, stronger bodies called transtectors, that would allow them to better endure the hardships of the planet Master.

As the war continued to rage in space, where the advanced technology from planet Master formed the backbone of the conflict. Learning of the Decepticon activity brewing on Earth, but with limited means of getting there themselves, the Autobots yielded a new leap in technology, developing Master-Braces that would allowed human beings to combine with transtectors. Dispatched to Earth aboard a transport ship, the shipment of transtectors was intercepted by the Decepticon Pretenders who stole three of the devices. The remaining transtectors made it into Autobot hands and were used to create the Headmaster Juniors, while the Decepticons did the same for their side with their stolen ones. 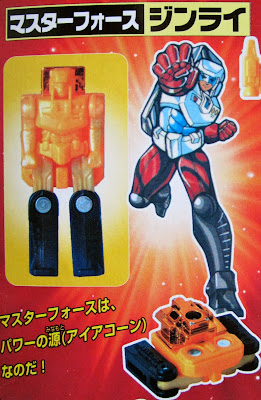 Ginrai's life was turned upside down when he discovered that he was an Autobot Godmaster and became bonded to a transtector from the G Nebula.
﻿﻿

Ginrai's signature attack technique is the "Atomic Fire Guts", which sees him condense his Chōkon Power into his gun and release it as a blast of roiling flame. Ginrai can combine with his own trailer to become Super Ginrai, upgrading his attack into the more-powerful "Special Fire Guts", and then again with the drone Godbomber to become God Ginrai. As God Ginrai, his Fire Guts attack is powered up once more, becoming the ultimate single-strike final attack known as the "God Fire Guts", which transforms Ginrai's entire body into a blazing fireball.
Don't make me angry.....you wouldn't like me when I'm angry....

Not specific to this package; this artwork initially appears on the back of the C-310 box, thus the original coloring of the figures instead of the "Fire" look.


The God Ginrai gift set was reissued in Japan in 2002; notable modifications were blue eyes for Ginrai, and a slightly different shade of red paint on the cab. It was notoriously over-produced, and online retailers were still selling it even years later, at greatly reduced prices.

The reissue was redecoed into the exclusive "Fire Guts God Ginrai" figure.

The C-310 GodGinrai I somehow got MISB for $91 + $35 shipping on eBay in 2012 as well.  I know it may have been overproduced, but like I stated earlier on, it's such a great toy with so much playability that it should have went for more. 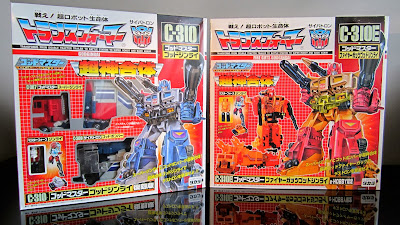 
Released to coincide with the 2002 reissue of the God Ginrai giftset, this redeco casts the Autobot leader in reds and oranges, representing Ginrai using his "God Fire Guts" attack from the animated series. Fire Guts God Ginrai featured his own unique packaging, with recolored package art, and was limited to 1600 pieces. 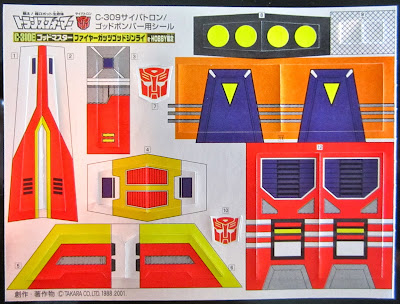 Plenty 'o stickers to go around.  Hey, at least it's not as many as you need for the new Metroplex.....what a disaster that is! 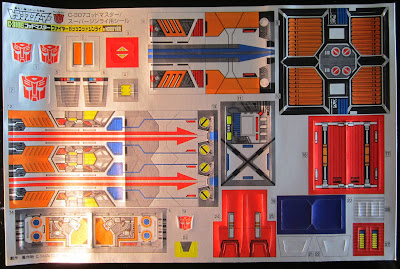 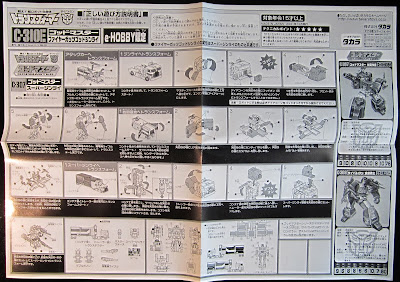 Fairly detailed instructions...but then again they would have to be with this figure. 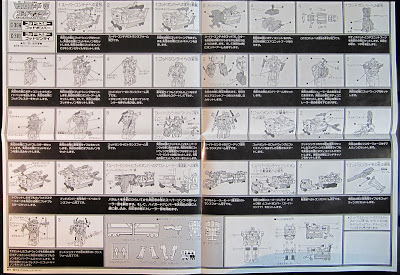 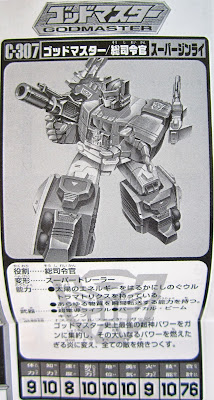 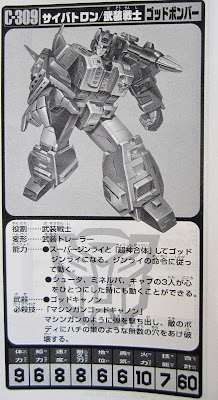 Though I do appreciate that they included some tech specs, albeit they were part of the instruction sheet, I wish they had included one for Fire Guts GodGinrai....and maybe made them into actual individual tech cards. 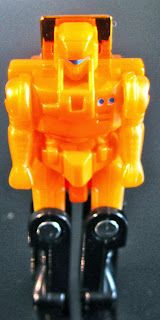 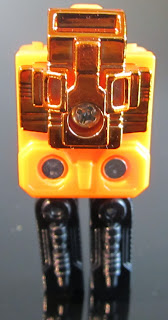 I think I had a knapsack like that when I was a kid too.  Actually, the orange chrome is the engine block, and after folding Ginrai's legs up both sides, he pops into the front of the cab (below) unlocking the transformation process. 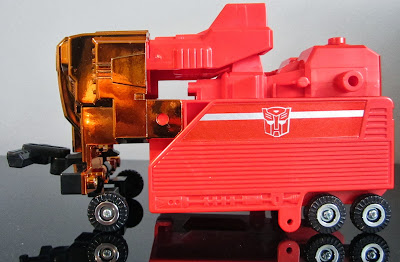 Godbomber is an Autobot drone from the Super-God Masterforce line.  A product of the super-science of the planet Master, created by the Autobots to serve as a personal power-up for their leader, Ginrai. Godbomber is merely a drone with no spark of his own, animated by Chōkon Power drawn from Ginrai himself and responding to the Autobot commander's emotions and needs. Godbomber is also equipped with cargo space to carry the Transtectors of the three Autobot Headmaster Juniors, who can drive the drone from his three-man cockpit and animate him by uniting their own Chōkon Power. 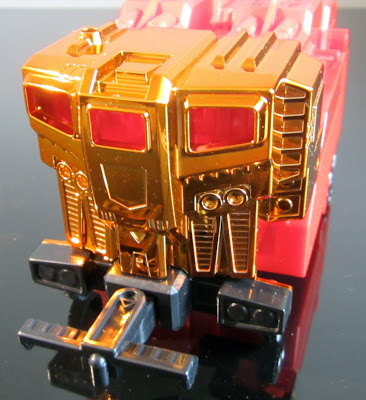 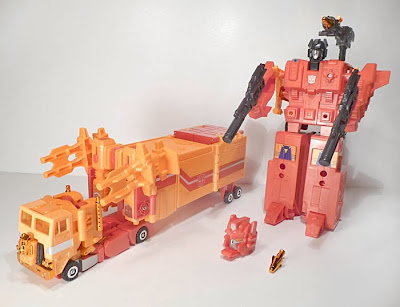 Here is the God Bomber trailer in robot mode. 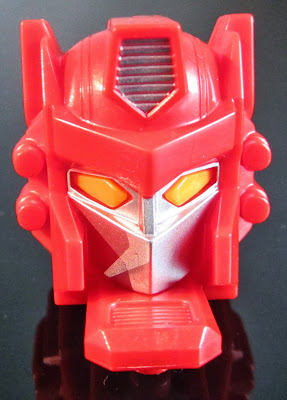 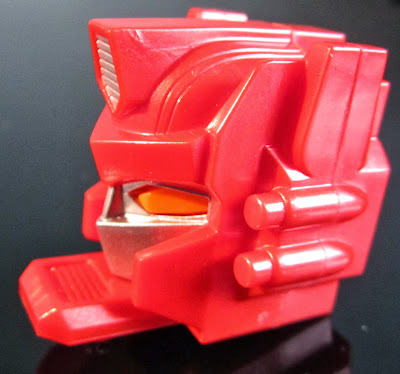 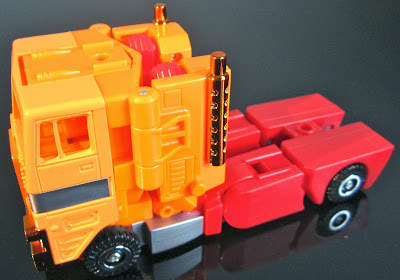 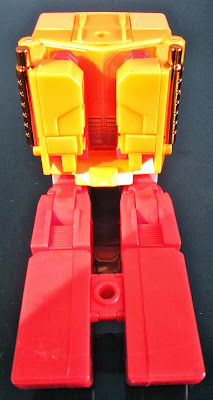 It's okay for a cab figure, though it's no G1 Optimus Prime.  It's unfortunate that they couldn't do anything to make the cab windows more visually appealing.  It might be confusing if you compare it to the cab's windows below with their nice clear orange look, but that's because after you transform the cab to robot mode, unlike with G1 Prime where the front of the truck is the front of the figure, the rear of this cab actually becomes the front. 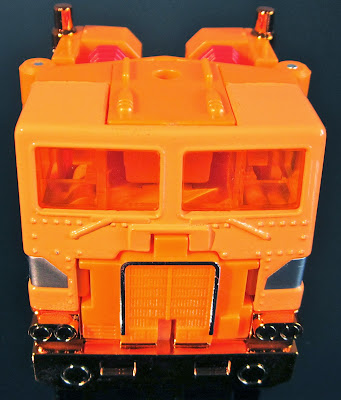 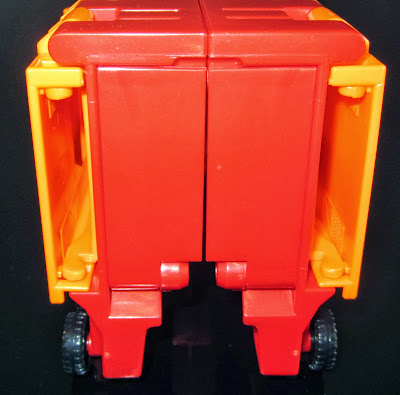 Not much to the ass end of the main trailer.  You can see at the bottom centre how they left a small gap space....this is where God Bomber's hitch is place so that he can tag along for the ride as well.

This is the cab combined with his trailer and Ginrai.  The biggest issue with this is his massive chest that sticks out way too far.


The only thing wrong with this setup is if the two black guns on top of the main trailer go off so do the ends of his arms.

So here he is in his full glory.  All of his colors come together so nicely.  I especially like how his massive gold chest stands out.  Okay, so if the guns fell out of his hands, as a figure he couldn't pick them up to save his life, but I'm willing to let that slide for overall appearance.  It's also nice that there is no leftover kibble lying around after you assemble everything.  If you have seen the cartoon, this comes across as a nice representation.
﻿

I put Ginrai seated on this gun just to show how the variety of pieces can be used in multiple facets.  You could even use a individual turret as a kind of space sled for him to fly around on. 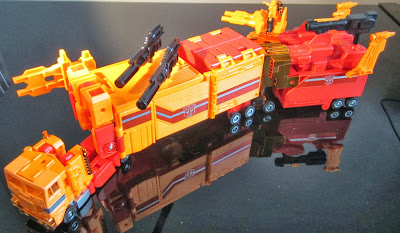 So after all this, I would have to say that for initialy having an interest in a figure based solely on its name, I don't think that I made the wrong decision in picking this little big figure up.

Could they have possibly have been another further upgrade of this figure?  Who knows. Cartoon-wise it easily could have been done....anyone reading this ever watch Dragonball Z?  F'n power-ups galore in that cartoon....and you know what?  PEOPLE LOVE POWER-UPS!  Take a look at everything we buy; the best is always bigger and better, with more features and more power.

So give me another mushroom Mario to make me double in size.  Give me some spinach Popeye so I can have ridiculous forearms.  Give me another power-up e-Hobby with a super long name and I'll buy it. GOD ON!

Posted by acdecepticon at 9:47 PM