"If you prick us do we not bleed?" - Shylock - The Merchant of Venice

"If I have no face can I not still smile?" - Angry Canadian Decepticon

You'll get the reference for this later in this article.

This ending up being a rather impromptu photo shoot that happened to take place when I visited my friend "M" last Friday to drop off his half of the Red & Blue Browning KOs that we had ordered together. 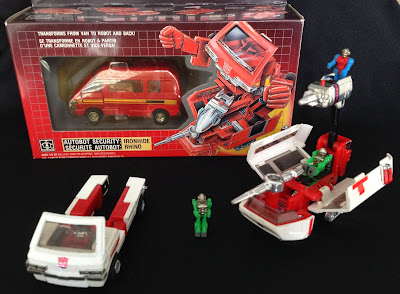 The Autobot Security : Ironhide figure came from a purchase from a store near "M's" work for
$90.  The Red Cross Variant of Ratchet came from a comic/toy shop near Niagara Falls.

Originally, Ratchet was a Onebox Ambulance Type toy from Takara's Diaclone line before being brought over to North America by Hasbro.
Ratchet transforms from an ambulance to a robot with a gun station.  A variant of the toy includes red crosses on the top and sides of the vehicle. Ratchet and his redeco twin Ironhide, like all Diaclones, were designed to be piloted mecha, which is why he has a seat instead of a head. The Transformers version applied a face sticker to the back of the seat in lieu of a real sculpted noggin.

In 1986, he was made available as a mail-away item (as he was no longer shipping to retail shelves). He cost $8 and two Robot Points.


Here is a little backstory on how you could order Ratchet after he was discontinued off of the shelves from local retailers:

The S.T.A.R.S. continuity is a micro-continuity established in several mail-order flyers included with the G1 toys,  as well as a direct-mail flyer and some fanclub merchandise. Its storyline was intended to encourage readers to join the S.T.A.R.S. fanclub and order away for exclusive toys no longer available at retail.

Deep within the data battle center, Rodimus Prime solemnly recounted the story of "the most crucial" Transformer battle for an unknown audience. This "legendary" conflict took place prior to the construction of Autobot City on Earth:
An Autobot convoy led by Optimus Prime set out to determine a building site for the city. They were ambushed en route by Megatron, the "death-dealing, menacing machine gun" and Thundercracker "the energy-zapping fighter plane". Soon the "innocent convoy was converted into a shower of drone rockets" and other weaponsfire.

As punishment for trying to escape their bizarre little continuity, they were cursed to relive this moment forever.
Optimus ordered Cliffjumper, Warpath, and Cosmos to retreat and summon help, believing this to be the team's only hope. Despite their attempt to escape Thundercracker's "force field," they found themselves actively pursued by the Decepticon jet.
All of this information, including Rodimus's introduction, was relayed to potential S.T.A.R.S. recruits, who were told that they, too, could "get in on all the action in this desert drama ambush."

This one still has nice clean chrome with just a touch of wear on the rear corner panel. 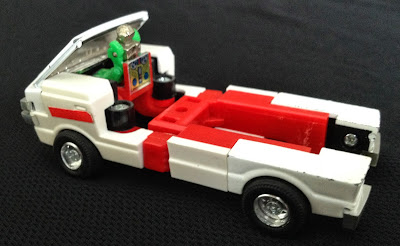 On the current collectors market, a Diaclone toy that still has its original Diaclone driver figure is worth a reasonable amount more than one without it. One problem however, is that many Diaclone toys on the secundary market today come with an incorrect driver....or a knock off. 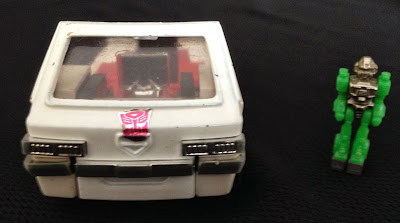 I tried to show a close up, but unfortunately I was shooting this with my phone.  You can see the face decal place on the back of the drivers seat.  If I really think about it, I guess I can understand Hasbro's reasoning for replacing the drivers to make the Transformer figures more sentient beings rather than needing to be driven around.  Children's perceptions were probably changing around this time so as a marketing ploy, what kid wouldn't want a transforming car/robot that didn't require a driver. (I was still a kid myself back then, and I'm pretty sure that I would have preferred a self thinking/moving figure). 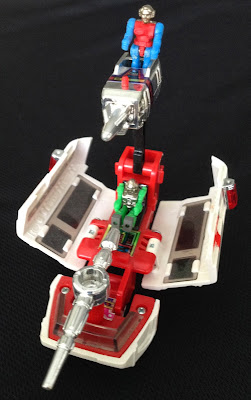 Ratchet is the Autobots' Chief Medical Officer. If something's broke, he can fix it.  His irreverent bedside manner has given him a dry wit. He is not a particularly mighty warrior, which sometimes leads him to believe that he is expendable. Optimus Prime has trouble convincing Ratchet that this is far from the truth.
Although he's a healer, Ratchet often finds himself on the front lines of combat and, on occasion, the last hope the Autobots have. These pressures are sometimes too much for him to handle, but Ratchet ultimately never gives up. His vehicle mode sometimes splits into his robot and a separate component. 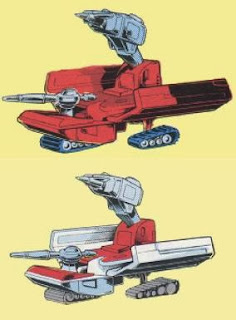 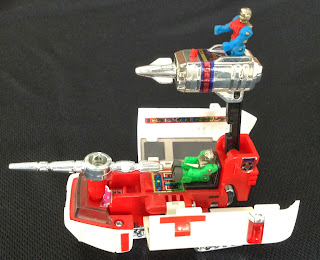 NOTE: All the Diaclone drivers shown are original but none are the specific figure for Ratchet. 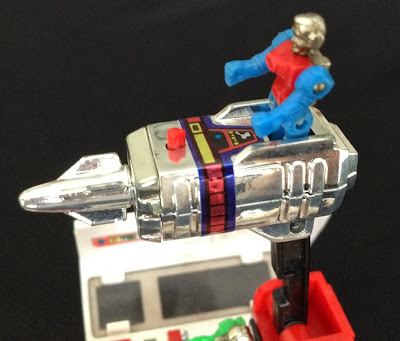 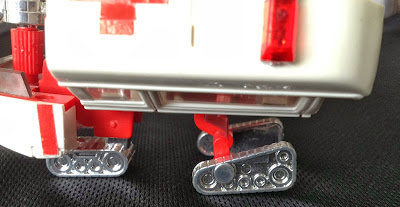 I like how they have "tank-type" treads instead of plain wheels.  They could have taken the route of say someone like Optimus' trailer where it wasn't mobile once it converted into a Command station, but as a small battle station it definitely makes more sense to have it mobile, and with the ability to traverse tough terrain. 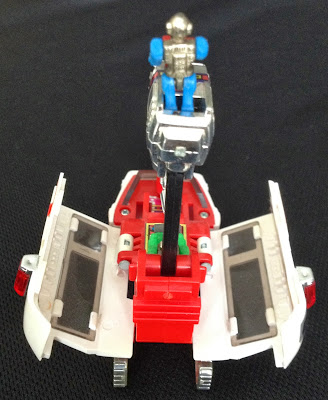 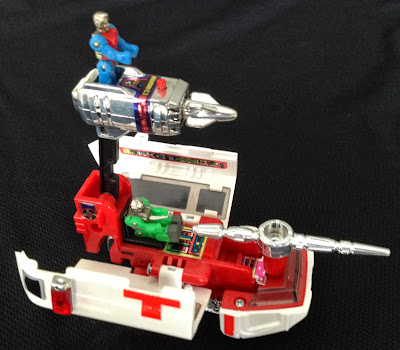 I think the whole battle station idea works so much nicer with the little figures.  Maybe Hasbro could have left the drivers in but incorporated them just into the battle station as opposed to needing them to operate the whole figure. I'll delve a little deeper into this at the end of the article. 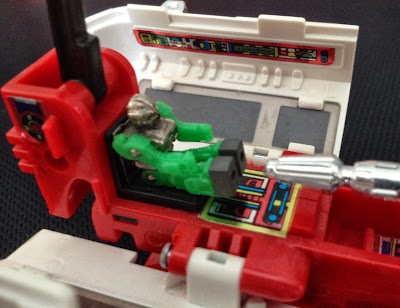 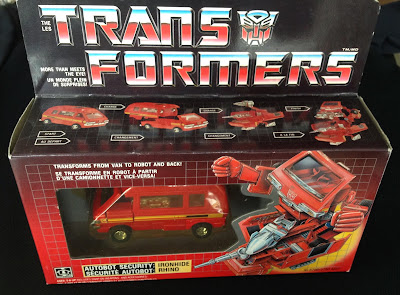 Ironhide was designed as  a Nissan (Onebox) Cherry Vanette SGL and voiced by Peter Cullen in the cartoon. 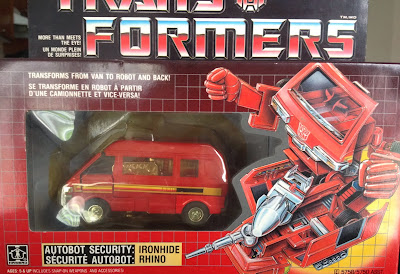 According to the original creator of the Transformers names, Bob Budiansky, Ironhide was named after the television series Ironside. 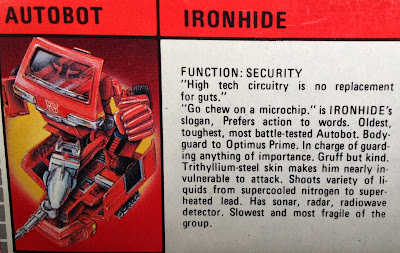 A resume that anyone would be proud of....only one thing; the last sentence, "Slowest and most fragile of the group" contradicts how they state that his "Trithylium-steel skin makes him nearly invulnerable to attack." Wouldn't this make him not fragile?  This was the 80's though and if the the cartoon was any indication, continuity of characters was not Hasbro's best feature.  I'll have to do an article on this sometime soon showing some hilarious cartoon mistakes by the animators.

Other than being S-L-O-W, he would have to be one of the guys you would want to have in battle.
I wonder if the fact that they gave him a 3 for Speed is due to him being a van or for his character being really old? 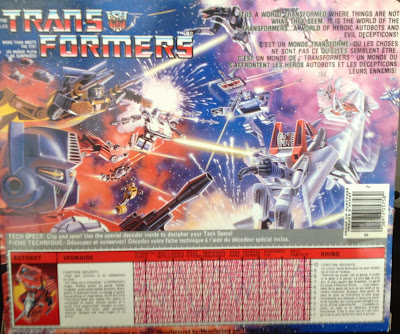 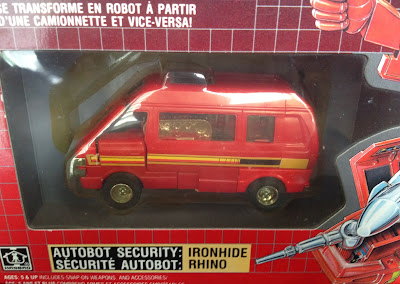 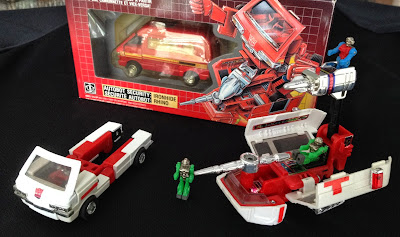 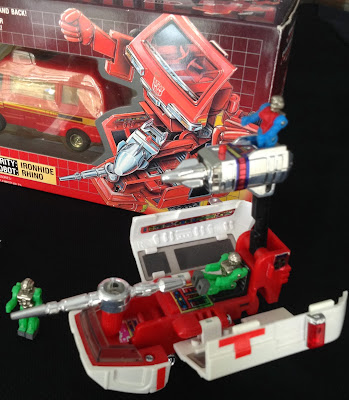 So now we get to the real discussion of these two figures.

WERE THEY SUCCESSFUL FIGURES?

My friend "M" never really cared for them for the longest time, and I have to admit that I was the same way.  As a kid, I never remembered saying to my parents, "I need to go to Toys R Us and get Ironhide! He's a really cool van!" Ratchet may have had a slight edge in the "cool" factor since he was a Ambulance and would fall into the same line as a firetruck and such......but not by much.

Now that I think about it, I think that my first purchase from TF Source when I got back into collecting TF's was Ironhide......that is funny.  I'll have to include a picture of him later when I pull him out of storage.  I don't remember what made me get him.  Maybe they had a good price on him, but I know it certainly wasn't because I HAD to have him.

I do say that after seeing "M's" Ratchet with the Diaclone drivers with him certainly does make this figure more appealing, AND it does make more sense as a toy.

Who knows, these two figures may have had a different story in terms of fan appreciation had they been made, or changed, with actual faces that kids could relate to.  From a marketing standpoint, the figure as sold by Hasbro was a complete failure.  A kid would see Ironhide on the cartoon with a face like everyone else and then go to the store, buy him, and when they get home say WTF!  Where's his face? And then have his parents take him back to Toys R Us, or Consumers Distributing, and return it for another figure.

No love for Ratchet and Ironhide?  Maybe we should all go back and take a look at these two figures a bit more closely and see them for what they really are.  Two great figures with multiple options of playability.

After all, aren't we all just a little misunderstood?

Posted by acdecepticon at 8:11 AM