I was extremely pleased at how fast and safely Aces Toys (click HERE for a link to their page) shipped these items to me.

First before I get into the pics, here's a brief history on the Browning character:


From the Super-God Masterforce, (man, I really do love Japanese cartoon names), the Browning is actually a tiny Transformer given to "Cancer" by "Mega". He is periodically described like a pet, but rest assured, he is a living  Transformer. Being a little best friend for Cancer, he would do anything for her. Although he's not a typical Decepticon, he has no love for the Autobots.
Given that he is a small robot, Browning is actually able to transform without changing his size, into a human-scaled handgun.  In his alt-mode, he is unable to fire himself, but when being held by another being, he can draw on the energies of that person to supercharge his blasts. Also, rarely does he shoot anything lethal, rather he shoots out a variety of projectiles and liquids, including smoke capsules, confetti, water, flags....need I say more? 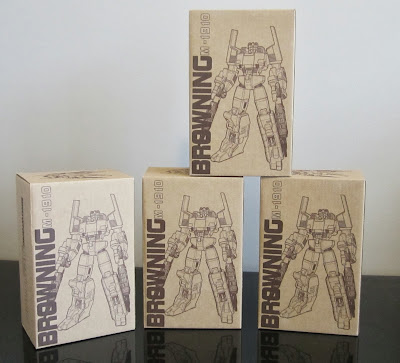 Not quite a Browning army but it's well on the way!

The box might be a plain brown, but I really do love the stencilled artwork of the figure. The figure is such a nice throwback and it reminds me of the old anime cartoons, like Robotech, that I used to watch.  Everything just really works here.

His tech specs were a little surprising to me.  I just figured he would be kind of similar to Megatron as in having overall high stats, but other than his Firepower = 9, Endurance = 8, Strength = 7, all the others are either average or below.... Intelligence = 4?
I guess it's just been engrained into us that if you're a gun, you should automatically be powerful.
Still, it's cool that even as a KO figure, they took the time to throw this little extra in.

The back of the box is a little strange to me.  I have no idea of what the framing edges of the window are for; almost like there is a picture missing.  My only other guess is that it might be some sort of targeting window, but I'm just throwing that out there.

You can see the tape still on the box on the left side.  I took it off the right side and I'll probably do the same to the left just because it looks like crap.  Out of the red and blue figure boxes, only the Red Browning's box had tape on it. My thinking on this is that the Red B's are limited to 100 (according to Aces Toy Store website; link here) so this is either to "protect" them or to mark the boxes since both version's boxes look identical. 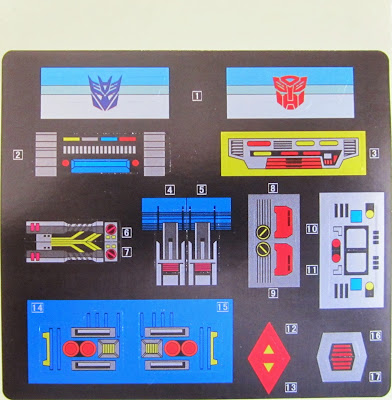 Two different sticker sheets have been included with each figure, probably to mimic how this figure was released in both the Microchange chrome and red colouring, as well as the Masterforce chrome and blue plastic. 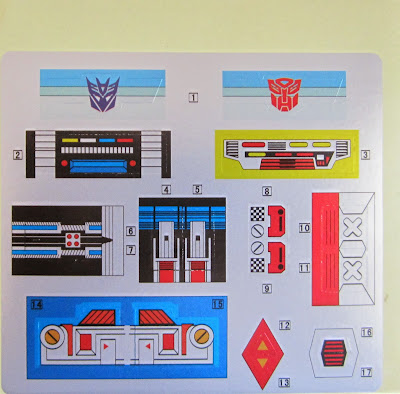 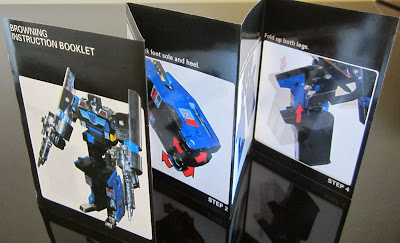 The instruction booklet is nothing to write home about, but I will give it this, and  Hasbro might want to read this : "PEOPLE LIKE INSTRUCTIONS THAT ARE IN COLOR !"  My Hasbro MP Acid Storm that I received a few weeks ago has a black and white sheet of instructions and that's an MP figure! 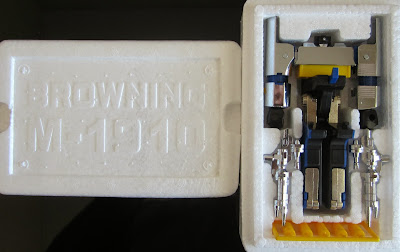 This is what they come with : 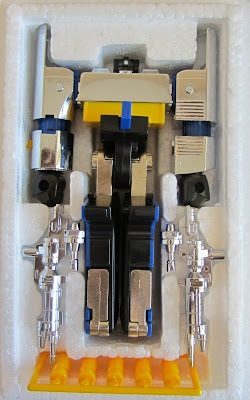 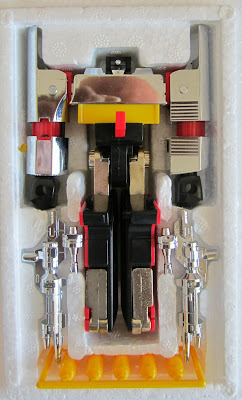 Here are brief sections from a synopsis of Super-God Masterforce show : Episode 20, just to show you how they used the Browning character. (Pieced together from HERE @ Transformers Wiki)

"As Giga pontificates about the loss of the newest Godmasters to the Autobot side, Mega notices that Cancer is not eating and calls him to her chambers after the meal. There, she consoles him and presents him with a gift: a tiny Transformer named Browning, whom Cancer quickly befriends."

"Meanwhile, Cancer and Browning have taken a helicopter from the Decepticon base and brought Wilder and Bullhorn to Japan."

"His plan is to begin tearing up the area to draw out the Autobots, although the scheme gets off to a bad start when the diminutive Browning proves too small to pilot the still-flying helicopter, and it crashes on top of the Juniors."

"Now no longer willing to spare the Decepticons, Sixknight is about to deliver the killing stroke when he pauses, unsure of whether or not to go through with it. Browning uses his hesitation to ask Minerva for help in saving Cancer, transforming to pistol mode and having her fire him at Sixknight. Browning unleashes a volley of smoke bombs, which obscure the battlefield and allow the Decepticons to escape. " 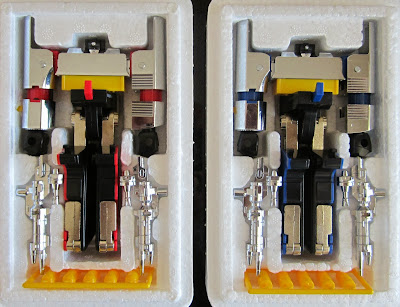 Nicely displayed together.  My only issue, and it's not even a real issue, more of just an unfortunate comment on the reality of the world that we live in today regarding shipment of items across borders, is that I REALLY WISHED that these could have displayed inside their boxes in gun mode like all of the older gun figures.

If someone really wanted to make some money for cheap, they should manufacture a styrofoam case holder just by itself created with the mold of Browning to be displayed in gun mold. (It's still okay to ship styrofoam with an empty gun mold across borders without any issues as far as I know.) I would buy that for each of these figures. 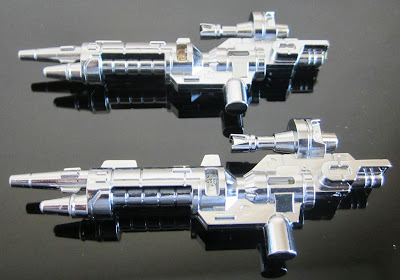 The chrome guns display nicely.  If you look closely at the top one, you will see in the centre of it some dirt or corrosion, not sure which, that must have happened during the manufacturing process. 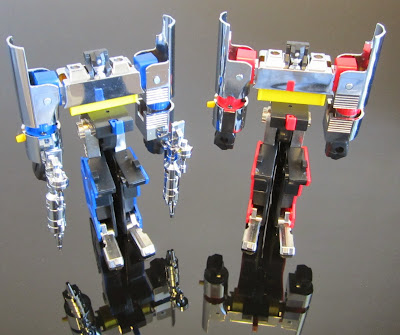 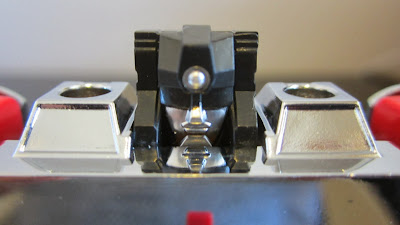 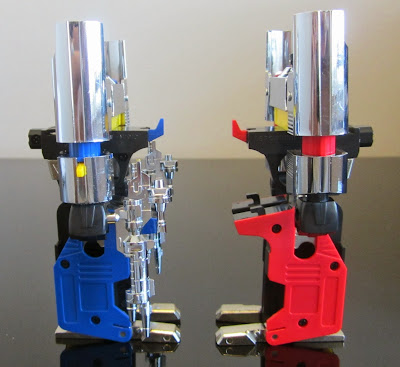 I wish my shoulders were that big ! 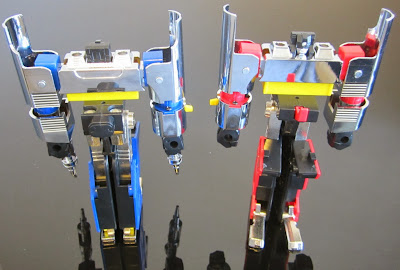 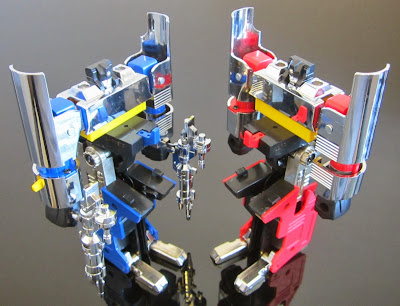 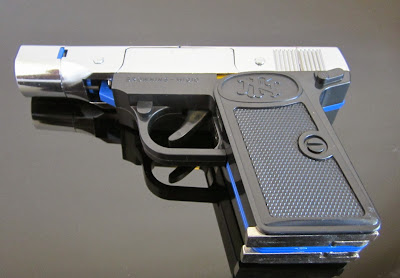 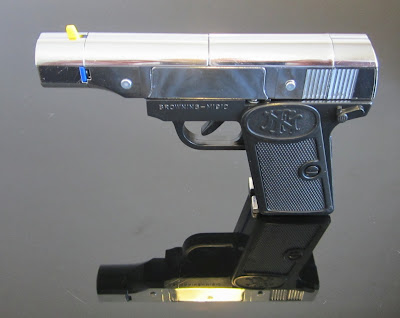 Fabrique Nationale d'Herstal (French for National Factory of Herstal) — self identified as FN Herstal and often referred to as Fabrique Nationale or simply FN — is a firearms manufacturer located in Herstal, Belgium. 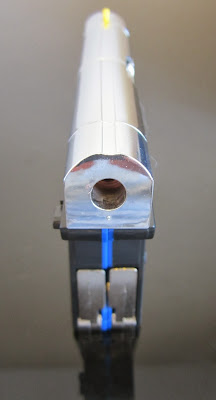 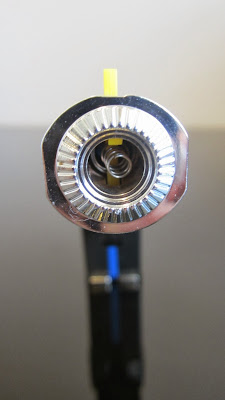 Still has the spring.....that's right, damn you to hell North American safety laws !!

"With my last dying breathe...I spit at thee!" (Star Trek:The Wrath of Khan) 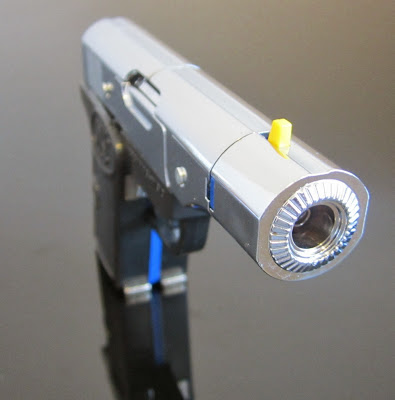 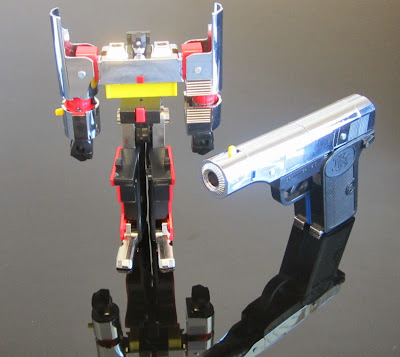 The figure/gun stands very well in either mode. 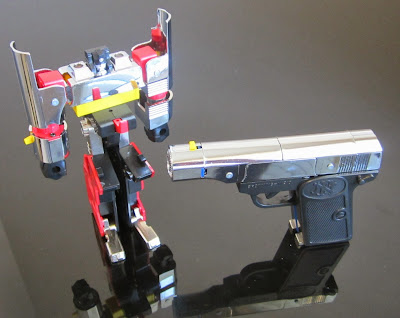 Would I recommend buying either of these?  Why not buy both I say !!
They are both relatively cheap; $45 & $50 for the Blue and Red ones respectively.

Here's the LINK to the main page for buying either of them if this article has convinced you in any way.

Posted by acdecepticon at 11:01 AM