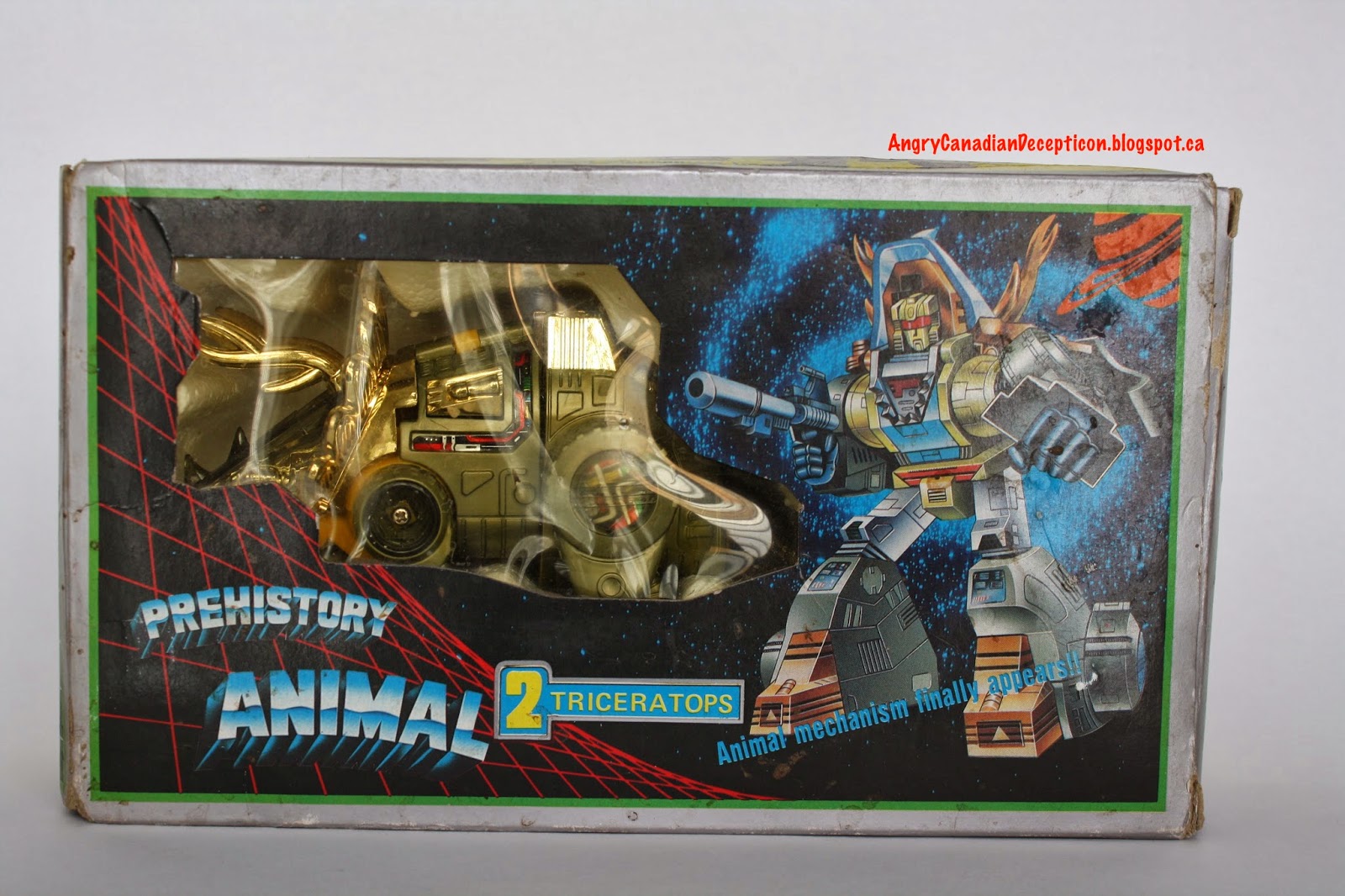 Although this figure is a KO, it really deserves to be reviewed (and owned) since we're talking about a very obscure gem of the 80's……..."Prehistory Animal Triceratops.

In the "bootleg" universe, it's not always about cheap quality and lame gimmicks.  Every now and then there are figures which should rank up among the best, thus becoming extremely rare and highly collectible.  And why not I ask you?  Some unofficial toys should rank way
above the rest of the barter junk and have been found with high prices on auction sites like eBay.  In the Transformers toys there's some highly valuable obscurities like the Korean Oversized KO G1 Bruticus "Destrong Combat Robot".

Back in the 1985 when the Dinobots hit the toy shelves, Chinese bootleggers released their two respective KO Dinobots toy lines called "Ancient Animal (or Dinosaur Robot)"; a direct copy of the Diaclone "Kyoryuu Robo", and the "Prehistory Animal" which were "redesigned" Dinobots like "Tyuannosaurus" (Grimlock) and "Prontosaurus" (Sludge).

As for Prehistory Animal "Slag", on the box it's called Triceratops, but in the booklet it is called "Triceratope". 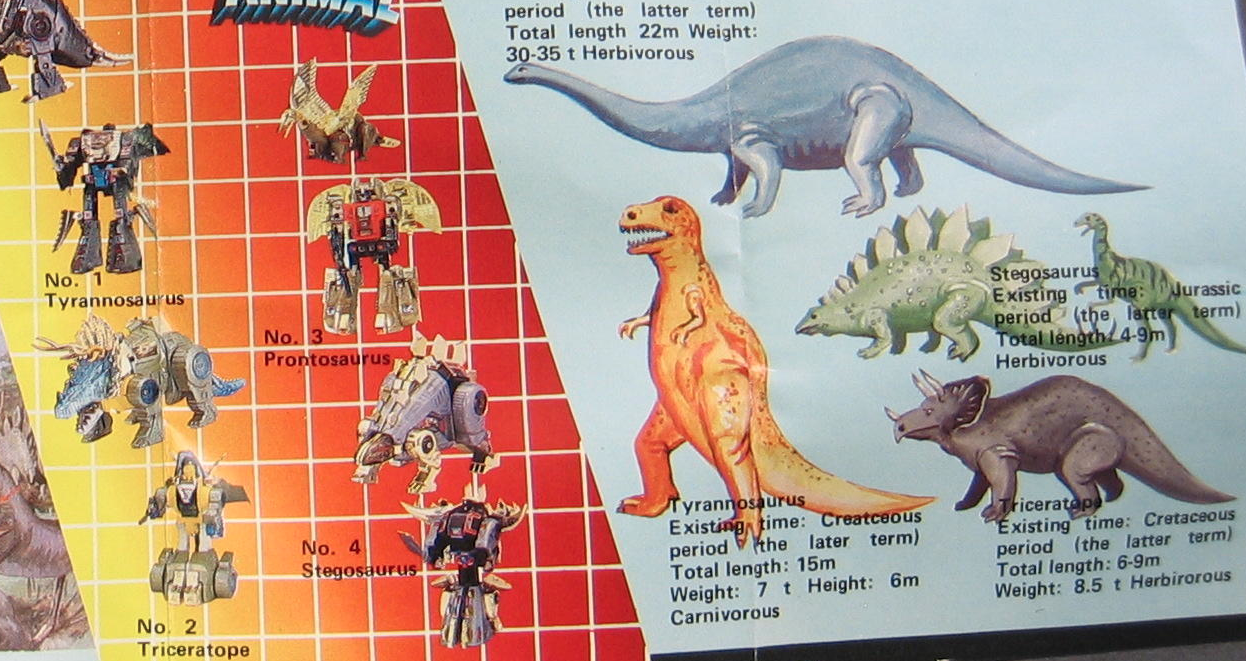 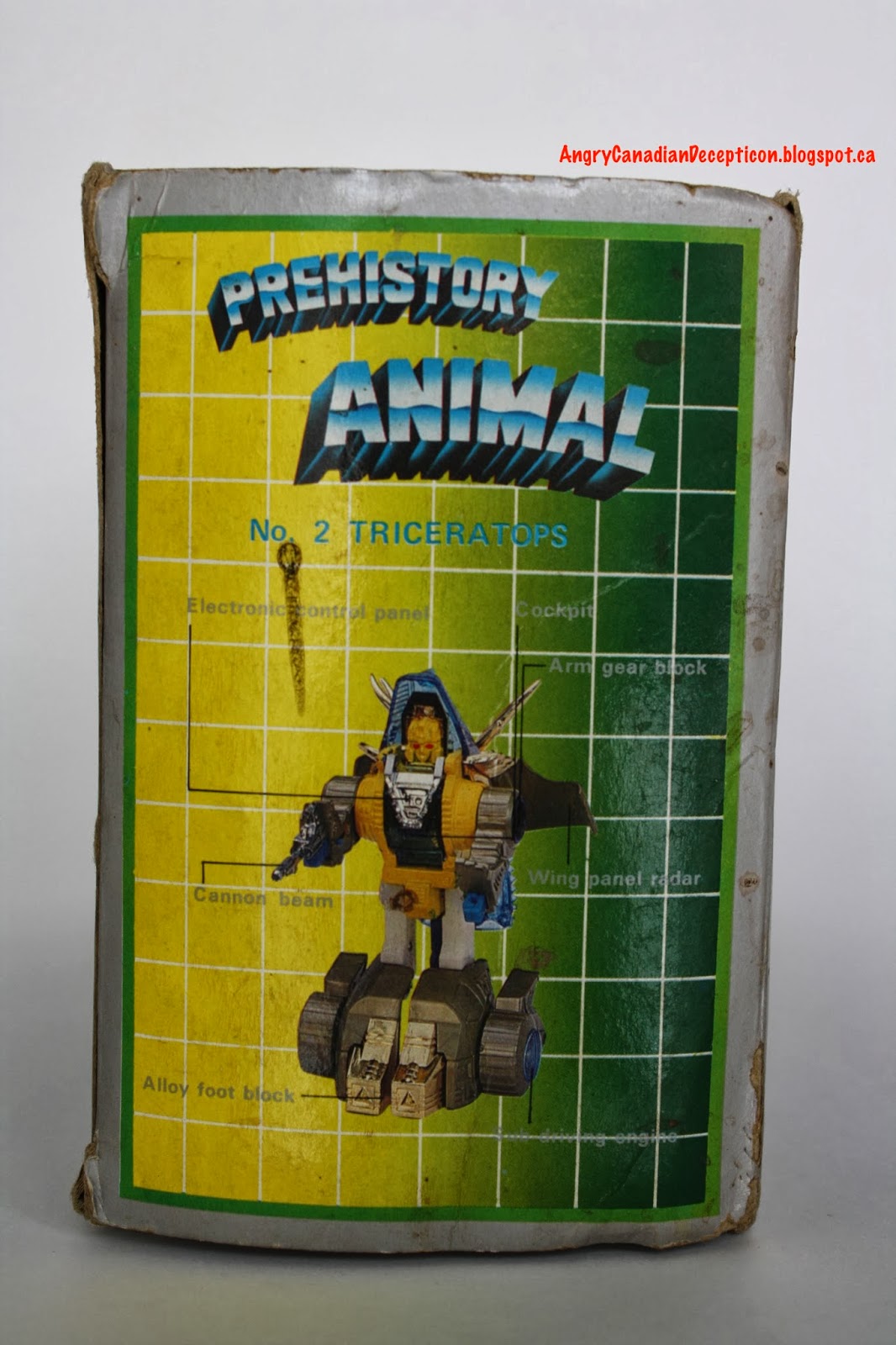 Unfortunately, both sides of this particular box took the brunt of the damage over the years, but given the age,  how decent all the other sides are, and especially how nice the figure is, I would say it's a small inconvenience. 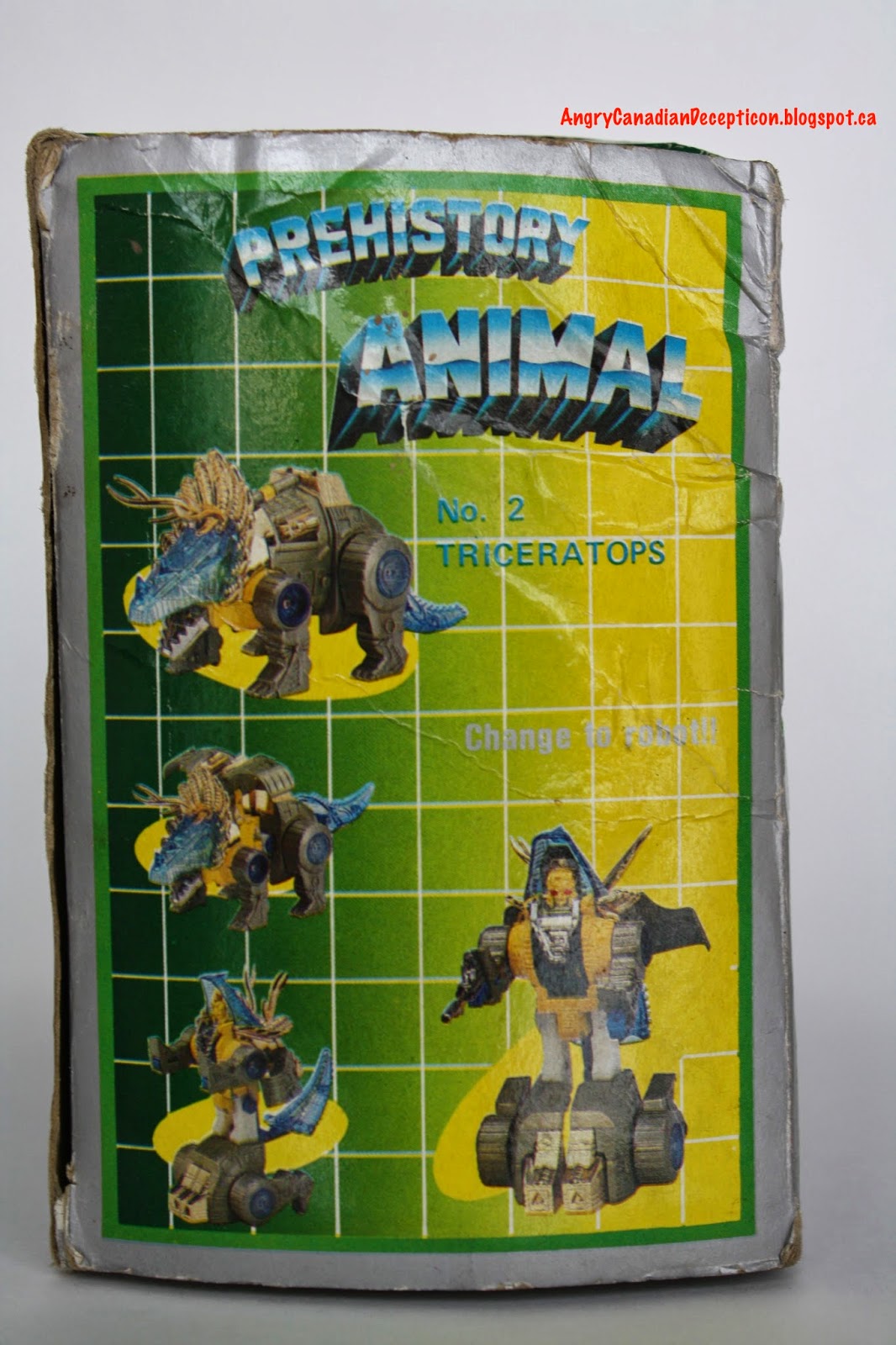 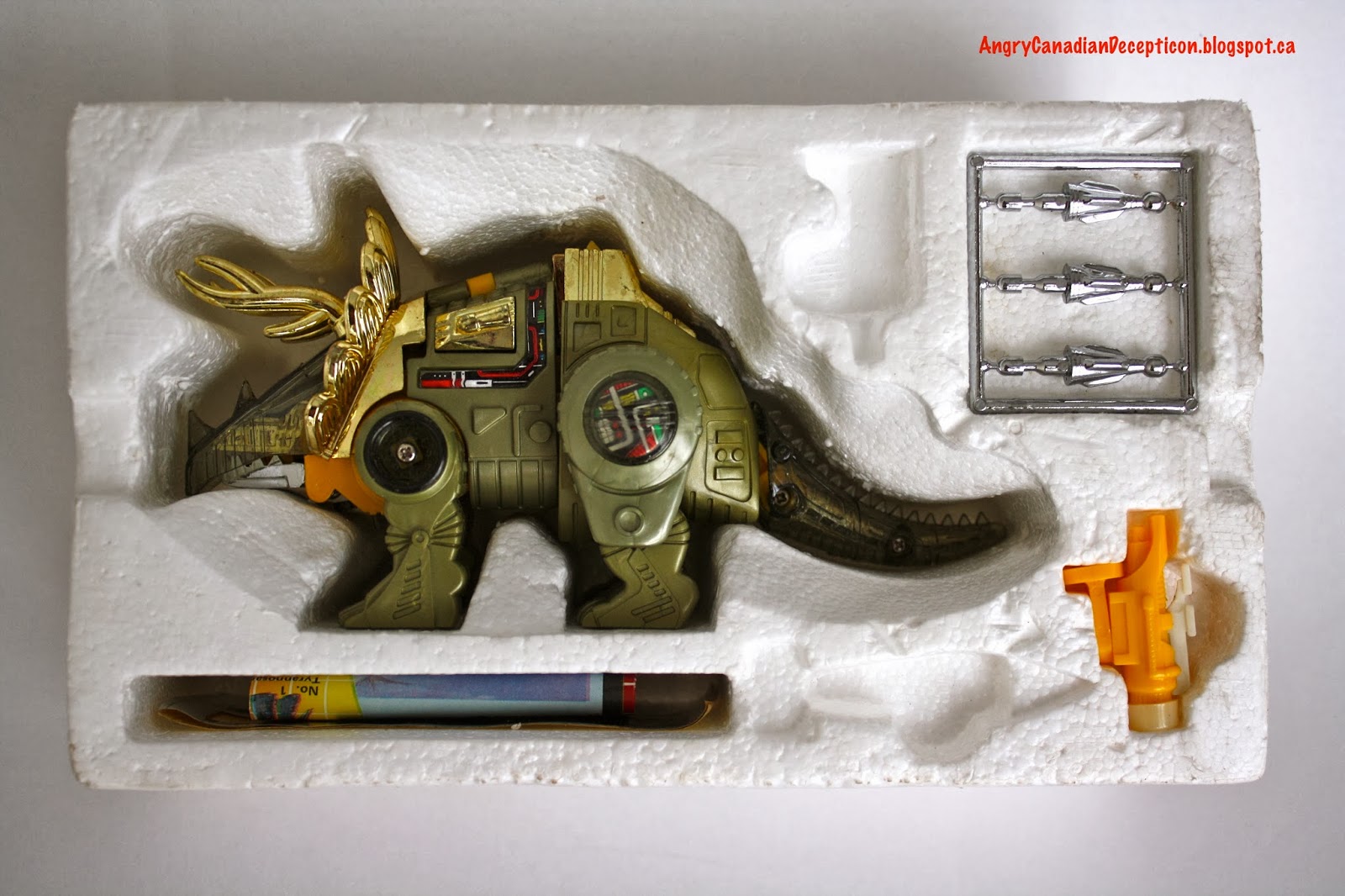 The main design of its dinosaur mode has several modifications from the original Triceratops/Slag, starting with the dinosaur head which has more sculpted details on the "mouth" part.
An additional small horn on the nose and a redesigned head frill.

His remoulded "deer-like" horns were gold-chromed, unlike Hasbro's red horns used on Slag.

Here you can clearly see how nice the gold chrome still is on the Prehistory Animal. 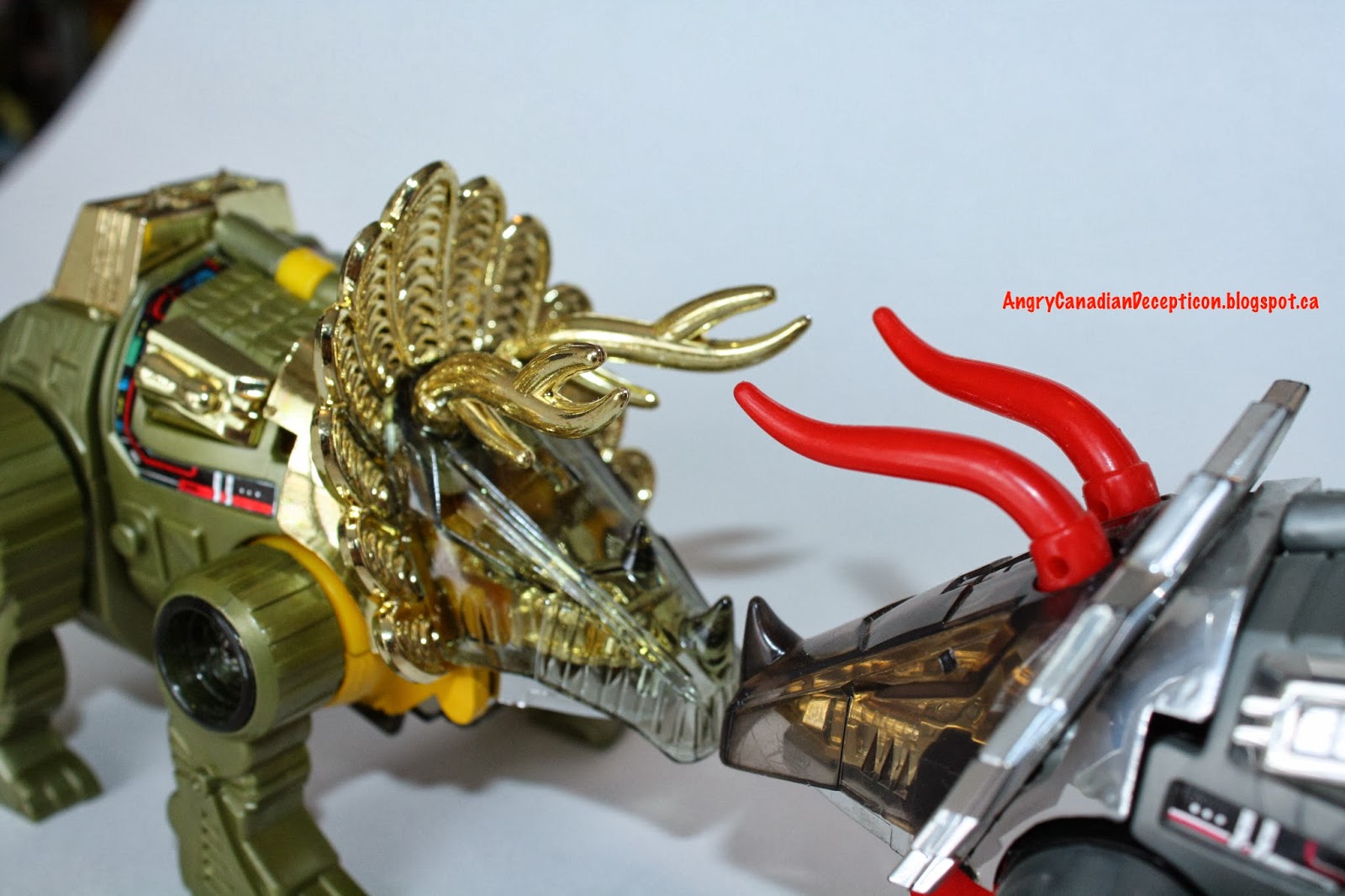 Both Ancient and Prehistory Animal figures were made with a plastic quality very similar to the original Dinobots, with their only real small flaw being chrome wear. 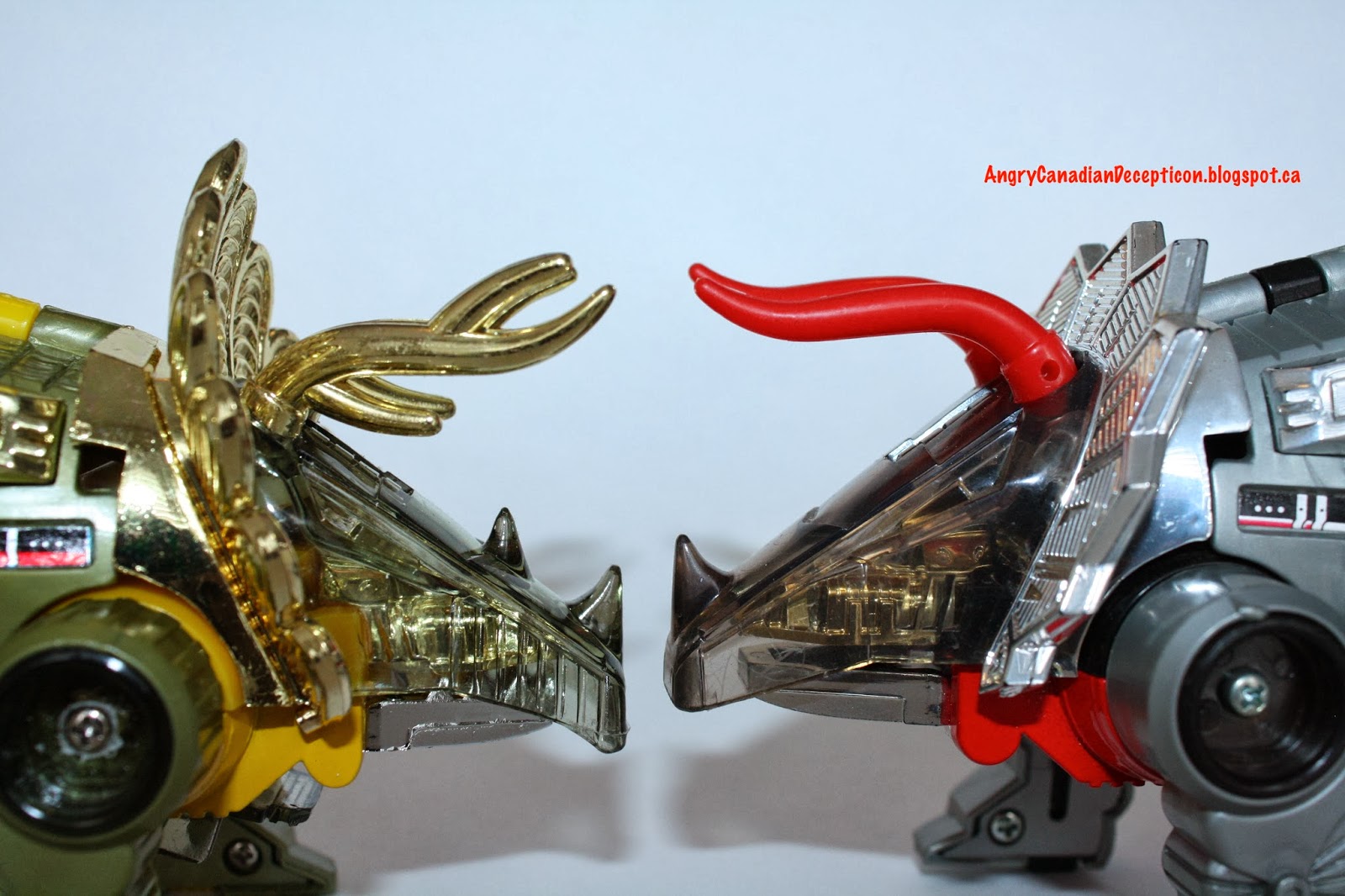 You can see Prehistory Animal has two horns on its snout instead of G1's single horn.  Technically, that would change Prehistory's name from Triceratops to "Tetraceratops" or "Multiceratops"…….or am I just putting too much thought into this. 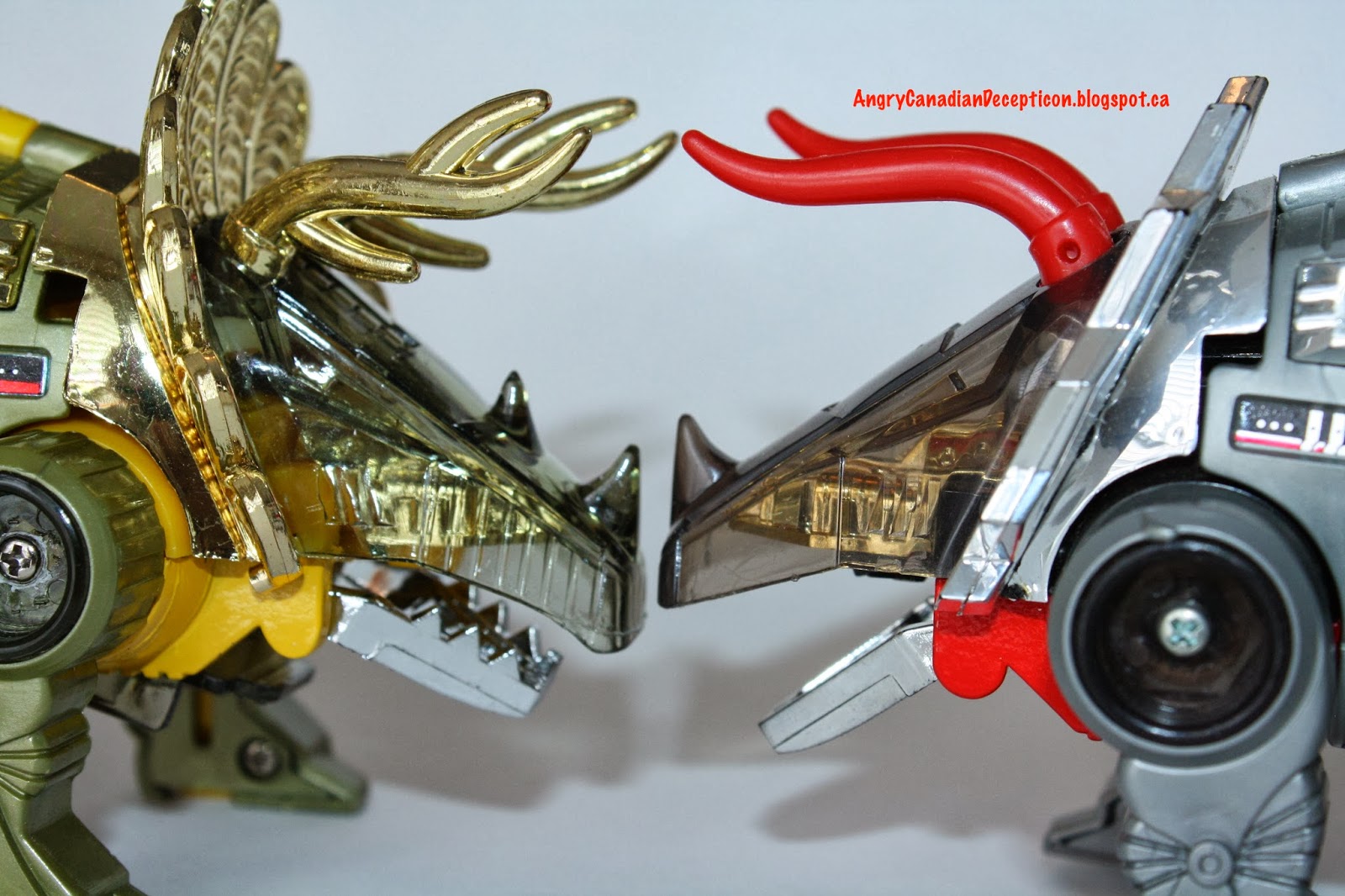 This one stare down shot may be my favourite out of all of them due to the contrasting features in both figures.

Personally I prefer the spikes for that extra little bit of damage and protection.

Prehistory's transformation is the same as Slag's, along with its articulation.

This is the kind of KO that deserves to be re-released, since the vintage ones are extremely rare and when they appear they reach outrageous prices. A complete Prehistory Animal #2 usually goes for around $200, and that's not even "MIB" or complete……..quite expensive for a bootleg, but it's one of those rare obscurities that are worth the price.

You have to be extremely intolerant (and I really hate to use that term because as I have said before, it really depends on your finances or the direction you are taking your collection in) to knock offs to not have this piece in your collection.  Both Ancient and Prehistory Animal lines are absolute relics and probably one of the Holy Grail of Knock Offs nowadays.

Do me a favour before you go and try to find one.  Wait till I post that I have them first…..then you can go and get one.  I don't need to have any competition at the moment.

Posted by acdecepticon at 7:34 AM