I found this little gem at the recent TFCon held here in Toronto. 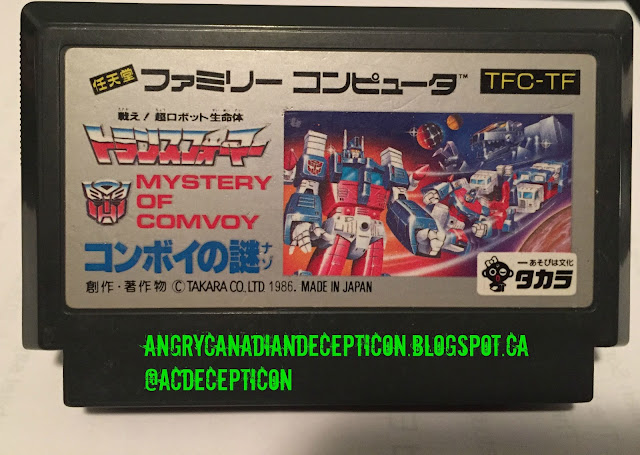 It was quite by accident that I even came across this game.  My friend, and co-host, of the critical and brutally honest podcast, Transformers & Beer, were nearing the end of our yearly sojourn to this Transformers event and I was off wandering the aisles by
myself for one last look when I stumbled across three stacked game cartridges all by themselves on a tables scattered with TF's.  As always at these events, I am combing the tables not only for Transformers but for retro games as well.  I knew instantly what I was looking at because I had done an earlier TF game post, albeit a brief one since I didn't own the game.  I knew I had found a Mystery of Comvoy….er, Convoy.

The misspelling is not only on the game cartridge but on the box as well.  (For those of you not familiar with the Japanese names given to Transformer characters, Prime's name was Convoy). 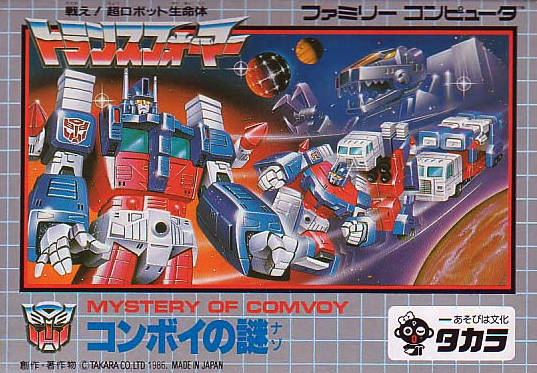 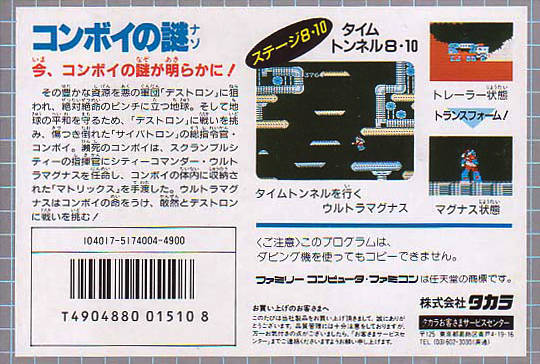 The game stars Autobot protagonist Ultra Magnus, who goes on a solo mission through various Decepticon strongholds to find out exactly what happened to Optimus.

The "Mystery" is trying to figure out who killed Optimus Prime (Convoy), because the 1986 film did not see a Japanese release for another four years. Since it was never properly explained to the Japanese fans how Optimus died, this game was intended to capitalize on this.

The player controls Ultra Magnus, who must shoot his way through 10 horizontally and vertically scrolling levels consisting of various Decepticon enemies, with a boss fight at the end of each level. He can transform into a car carrier, which makes it easier for him to avoid enemy attacks, drive through narrow entrances and shoot enemies that are flying above him. Along the way, he can also pick up various power-ups which can give him wider ranging firepower or even the ability to fly. There are two Warp Zones within the game; they can be found by rescuing Bumblebee from the Decepticons.

The bosses for each level consist of mostly large Decepticon symbols, along with Megatron and Trypticon (known in Japan as Dinosaurer).

Another playable character in the game is Rodimus Prime, who can be unlocked by collecting the letters that spell Rodimus. One is hidden, sequentially, in levels 1, 2, 4, 5, 7, 8, and 9. However, though his vehicle mode has its own graphics, his robot-mode sprite is Ultra Magnus in Rodimus's palette. 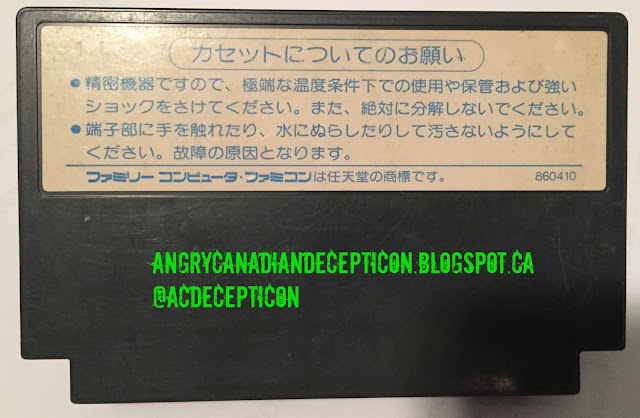 I wish I hadn't been in such a rush and took a few seconds to take a picture of the three cartridges of this game together.  Two of them were black so I took the one that was less faded, but the other cartridge was pink.  I would hate to think that I missed out on some "rare" version of the game if that is even possible as I came back one last time and the pink one was gone, but I have never come across a pink coloured cartridge through my online explorations before.  If anyone knows what the pink version is please let me know.

Here's a link to my earlier game post regarding this and another Transformers game.

Posted by acdecepticon at 5:05 AM