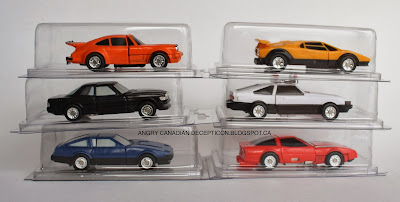 I picked these figures up early this year for $80 from the Burlington Toy Show after talking the dealer down from $100.  It was a rather uneventful show comprised of all sorts of toys
from various lines.  There just happened to be a snow storm that day so I think some people didn't make it down because of that, but that didn't stop my friend "M" and myself from making the hour drive there.  ﻿﻿

Unfortunately, other than this set I only came back with a MISB reissue Piranacon.  The dealer that sold me this Puzzler set had a MISB Transformers Collection Bliztwing but if I remember correctly he was asking some absurb amount for it; $160 or something like that.  The lowest he was willing to go was $140 but I only wanted to pay $120 so I walked.  Funny thing is I've seen this same dealer at every other show since and he still has that same Bliztwing for sale.

Tonka and Bandai created the first true Gobots combiner. Puzzler could be combined from six robots without the help from any additional parts.

﻿
The cars were well detailed, and their combination was extremely well done. 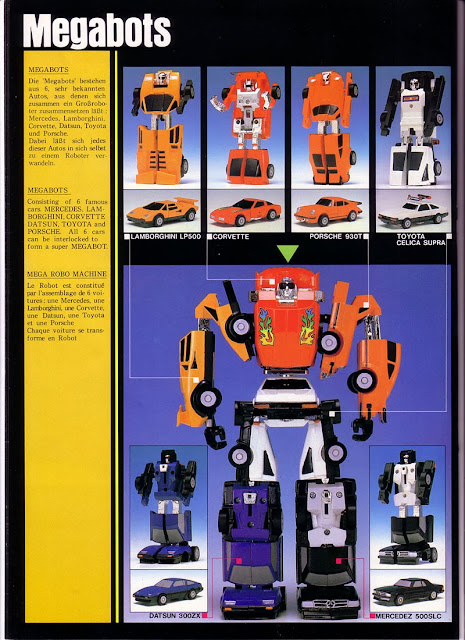 This page shows the Megabots with their names of their vehicle modes; prototypes with hand painted details and no rubber on the wheels (unlike the final production run).  They were actually released as the "Puzzlers" with their Gobots names.
In 1985, Bandai issued the Machine Puzzler as part of the Machine Robo line.  Later that year, Tonka used the figure for the Gobots naming this large robot Puzzler, and giving the smaller robots individual name (all loosely puzzle themed : Crossword, Jig Saw, Pocket, Rube, Tic Tac and Zig Zag).  They were assigned to the Renegade faction and were sold either as individual carded figures or in a boxset.

Tic Tac's vehicle mode is well done, though I was never a fan of this years style.  He has some nice engraving  throughout with two stickers on the hood to break everything up. 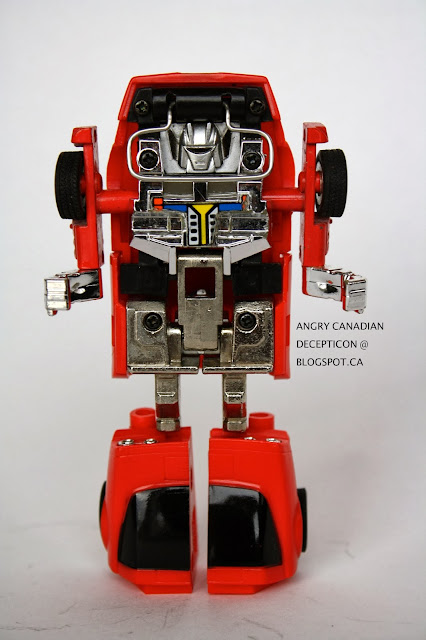 Unfortunately, little to no effort was placed into his transformation.  He gets stuck with little T-Rex arms that bend at the elbows, but with reason as will be shown later in combiner mode.  The head sculpt is nice though it is framed poorly by a thin metal frame which is used in combiner mode to hold Puzzler's upper torso together. 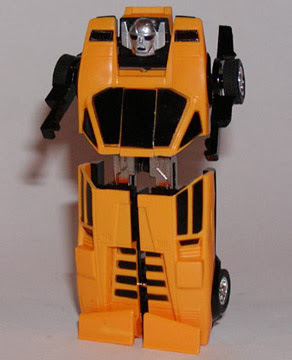 Pocket forms Puzzler's other arm and follows the same transformation as Crossword.  The thin arms are still there.  The head sculpt is excellent as it reminds me of Sunstreaker's.

The straight black color scheme works very well with the chromed lights and grill popping nicely. He also has some very nice weight to him. 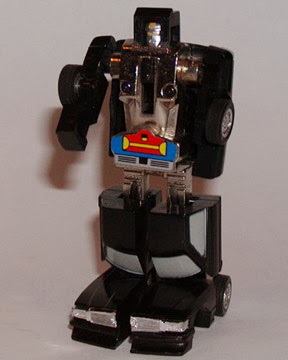 Rube forms one of Puzzler's legs, resulting in him having really large feet but I really like the look.
The only real standout piece is the puch button sticking out of his chest to raise and lower the heal sculpt. 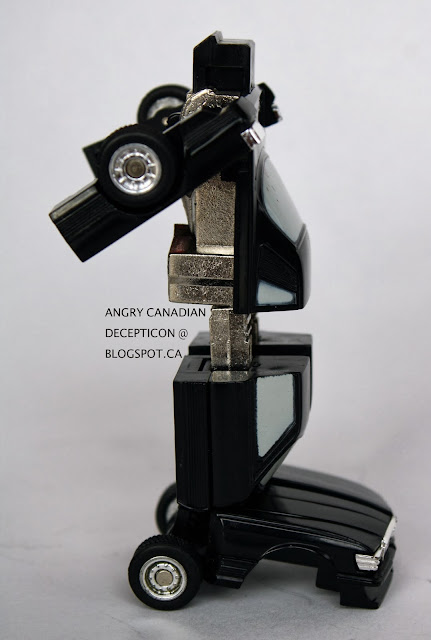 The wheels pop out from under the hood to form Rube's heels which I think is a nice touch on engineering.

This same model car was used for Baron Von Joy.  The biggest problem of this car mode are the heavy join lines.  Alos, if you go back to the top of this post and look at the 4th picture down you'll see a big black hole at the back end of this car which shows the back of one Puzzler's hands.
﻿
﻿ 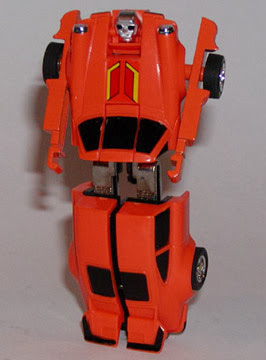 Crossword has great big legs and a little belly sticking out resulting in a disproportionate robot. 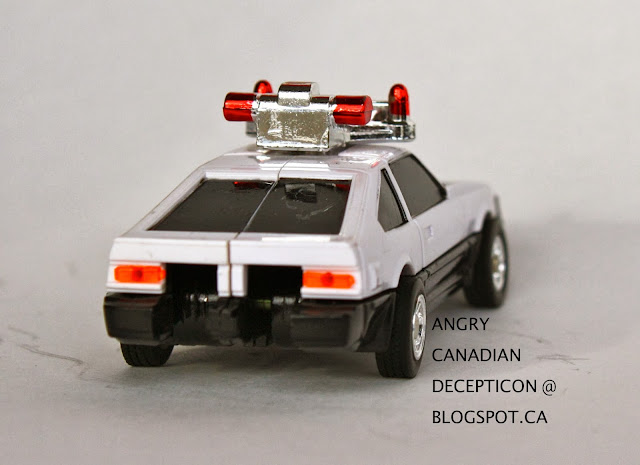 Jig Saw has one of the nicest vehicle modes of the six.  The join lines are minimal with the white and black popping off of each other.  The car has a very heavy feel to it with nice transparent lights on the roof. 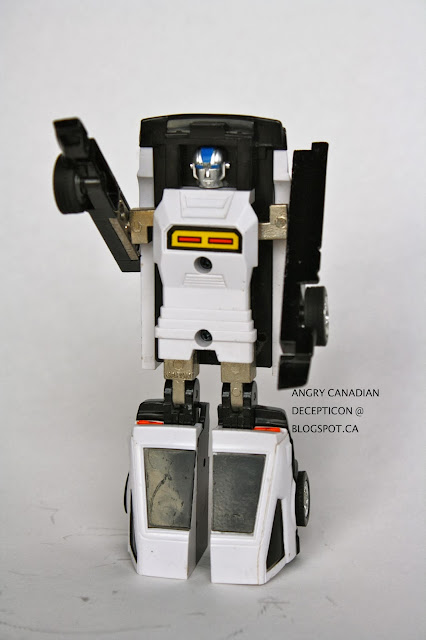 Transformation is really simple with most of the figures moving parts devoted to Jig Saw's role as Puzzler's lower torso and thighs.  I wish they had decided to included one or two more small stickers for the chest as the lone one they applied seems almost out of place. 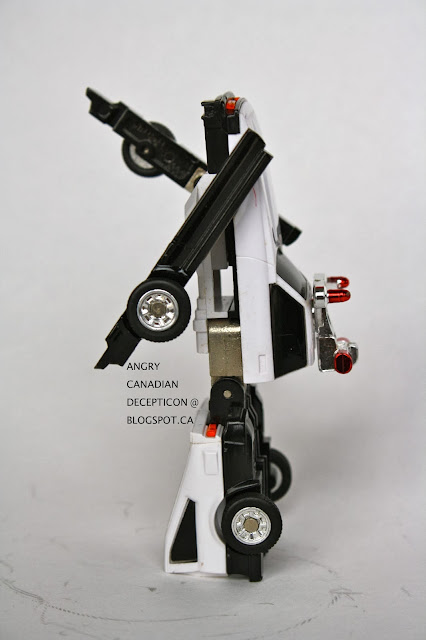 The main drawback of this figure is its long, thin arms, but at least they tried to put something that resembled hands at the ends. 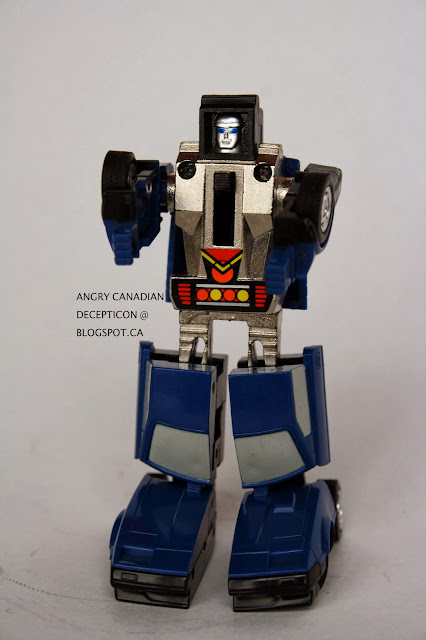 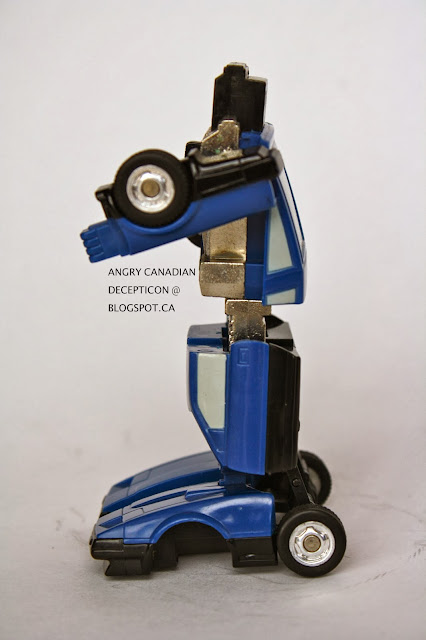 Zig Zag forms the other leg of Puzzler and so he follows the same layout as Rube. 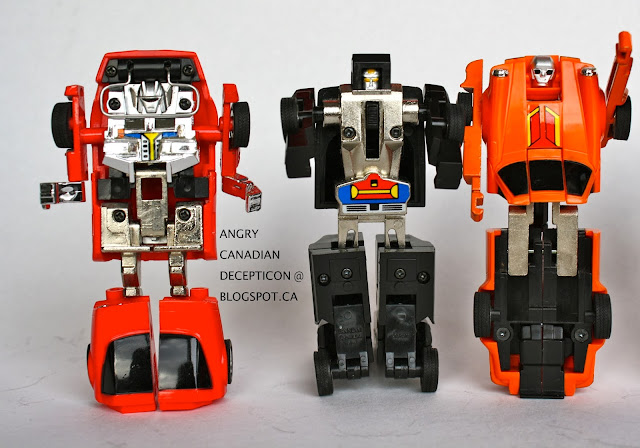 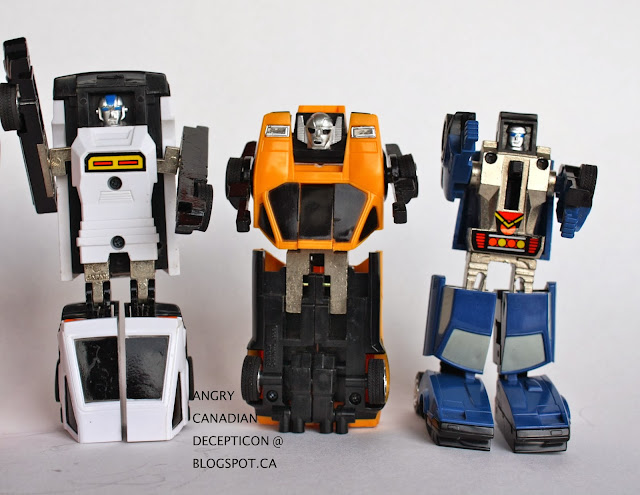 These guys came in two formats: 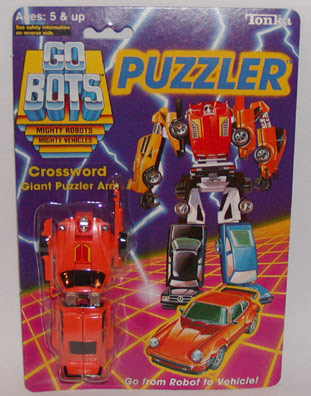 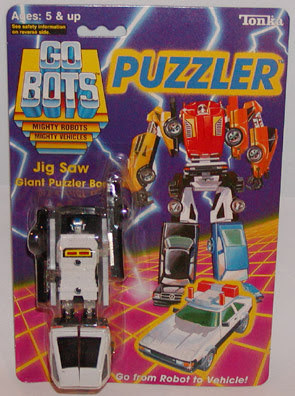 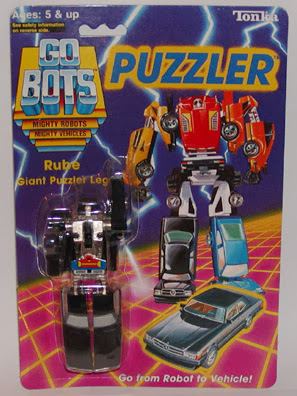 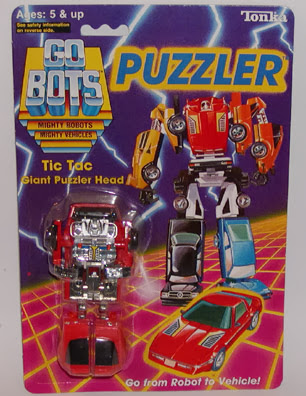 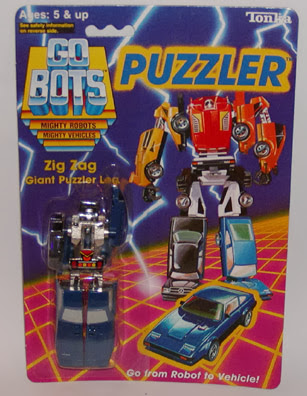 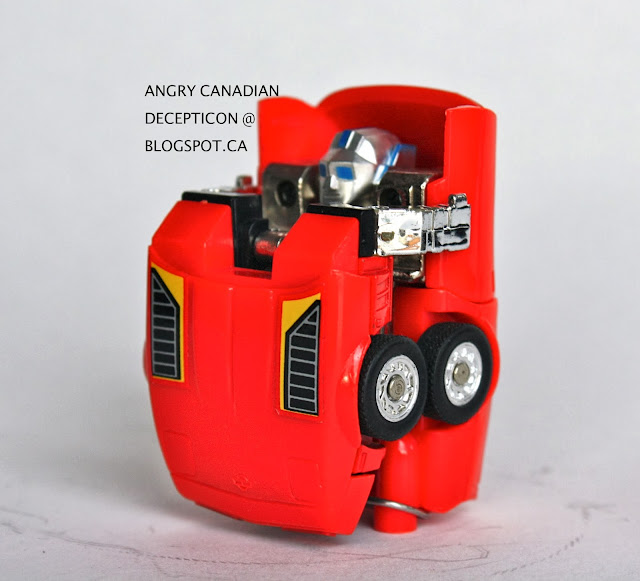 Going back earlier on my comments about Tic Tac's T-Rex arms, you can now see why they have their shape.  They clip onto the mid-section of the body to hold the chest section together in Puzzler form.


Jig Saw actually has articulation in his legs; not just at his hips, but at he knees too.  He is one of the most articulated Gobots.  It's too bad they couldn't have done a joint for his arms as well. 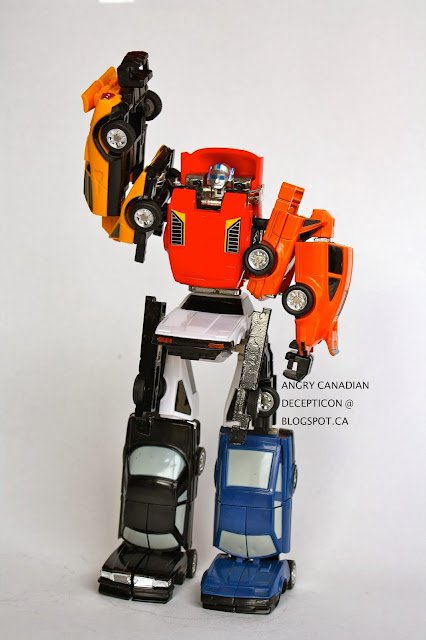 Puzzler generally looks very good.  Though while the roots of him being the six individual cars are clearly visible, he still looks clean enough that it doesn't look like a bunch of cars piled on top of each other.

The front half of Jig Saw (Police Car) sticks out rather blatently from Puzzler's crotch which tens to slightly ruin the overall aesthetics but hey, I'm used to that from Megatron.

The biggest problem when combined, is that Puzzler's joints tended to be very loose, so much so that even the arms could barely stay raised up. 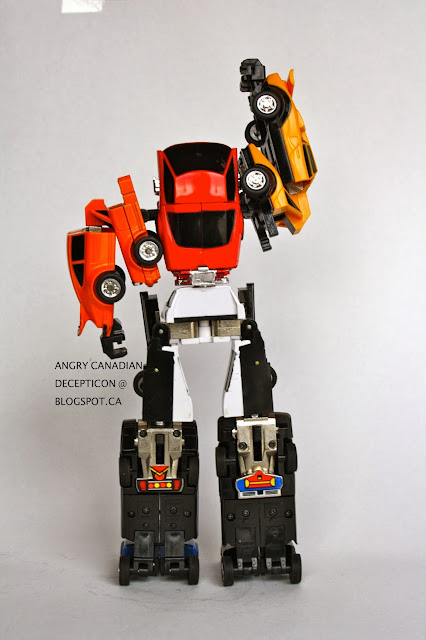 The arms move at the shoulder, elbow and wrist with slight movement in the legs as well.  The limbs are sturdy enough that even when one of them falls off, you can be rest assured that they won't break on contact.

﻿
His head is a little too small for the proportions of his body.  There appears to be more room under Tic Tac's hood that they could have concealed a larger design.

Puzzler has the advantage over some (most) Transformer combiners to collect as it is fairly cheap, plus also not having the need to hunt down every little single accessory.

The most intriguing and unique design of this combiner is that there are no extra parts. EVERYTHING IS ALREADY INCLUDED ON THE INDIVIDUAL ROBOTS, and for me that is enough to include this piece in my collection.

Posted by acdecepticon at 2:06 AM