Here is the latest addition to my collection .  I picked this beautiful piece up from eBay, even though when I saw it I wasn't really looking to purchase anything at the moment due to all the money Maz (joking) has me tied up with in my Masterpiece figures either purchased or pre-ordered from TF Source.


It was hard to pass up on this guy after what my friend "M" recently did, along
with some research and remembering some past conversations that we have had together regarding some very important facts regarding this embodiment of Megatron.

All of this I will get into as we go through this posting.

But first, for those of you not really familiar with this "version" of Megatron and its reason for being made here is…….

A LITTLE BIT OF CHARACTER BACKSTORY

Megaplex is one of a series of specially constructed clones of Megatron. He exists to foment confusion in the Autobot ranks and protect against traitors among the Decepticons. He has led many battles in Megatron's stead.
While Megaplex is ideally endowed with the same power as the original Megatron, the Decepticons' true leader is no fool. Realizing that a being based so closely on his own nature and with equal power would be quite likely to make a play to permanently replace him, Megatron thus had his clones constructed with a failsafe device that significantly restricts their abilities. Thus, though Megaplex is easily able to pass as Megatron for short periods of time, his intelligence, strength, firepower, and skill are capped at levels significantly below those of the real Megatron. The deception is likely to work best on the battlefield, from a distance, or when Megaplex is following a strict script set by the original.
Megaplex prefers close-quarters combat, tearing into his opponents with electron sword and energy flail. For artillery he prefers liquid helium "Freeze Shells". 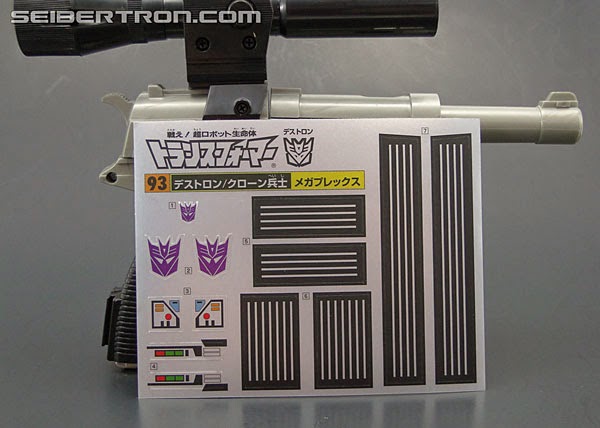 I don't want to get into every release of Megs, but rather just the key ones showing how they came to Megaplex's turn.


Released as an e-HOBBY exclusive, Megaplex is a redeco of the original Megatron Walther P-38 pistol toy in the same colors as its original Takara Transformers release, itself a coloration used in the Microman line the mold originated in. The spring-loaded firing mechanisms inside both the toy's main body and the stock have also been restored, letting the toy launch choking-hazard-sized projectiles in both pistol and robot mode.  Yeah!!

The original Takara version lacked all of the gun's add-on parts, having only the chromed rifle and sword, and of course the flail is new to the "bookbox" Megatron. His scope, stock and silencer can combine to form a large "particle beam cannon" artillery mode, or attach to his robot mode to make a huge shoulder-mounted "telescopic laser cannon formation". Both of these modes can fire the small plastic bullets the toy comes with thanks to the spring-loaded "death charge unit" portion of his stock. This piece can also connect to the back of his pistol barrel in robot mode, letting him "shoot from the hip", as it were. 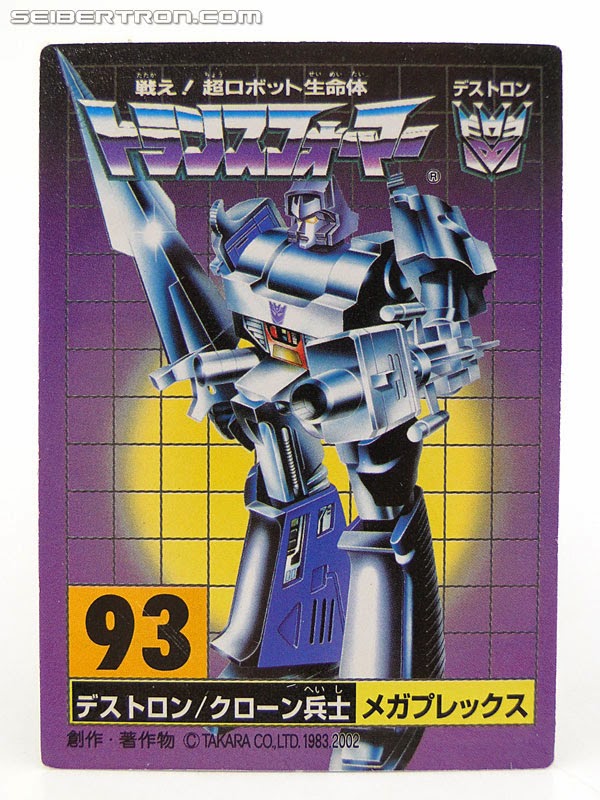 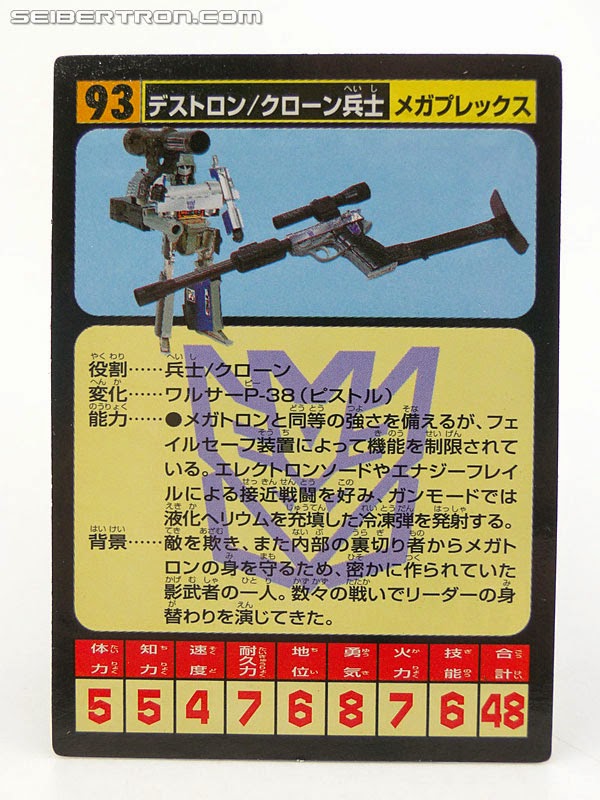 Below is a box comparison between these two very similar pieces, with the differences being between the colours of the bullets, gun handles and barrel, and only one energy mace.

Briefly, since they are soooo close in comparison, I think we need a bit of backstory for this character as well:

e-Hobby later reissued the Black Megatron Version in February, 2009. This release includes a mini-comic explaining the story behind the redeco.
Comic Synopsis : 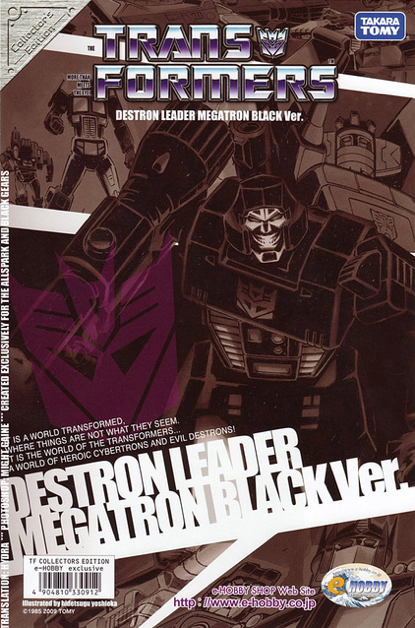 At Autobot Headquarters, the Decepticons are attacking. Brawn successfully beats one to a pulp, not backing off until Wheeljack encourages him to let up. Hound then asks where Optimus Prime is. Wheeljack informs him that he's battling Megatron, but without any weaponry. 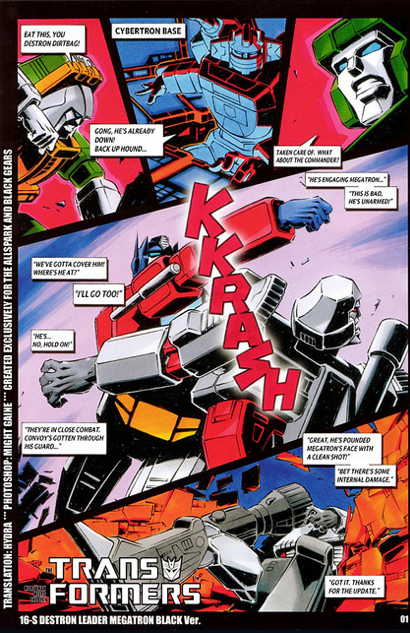 As Wheeljack provides play-by-play coverage, Optimus belts Megatron across the face and sends him hurtling through a wall in the Headquarters. Unfortunately, the blow damages Megatron's gyrocompass which acted as an internal stability regulator. This suddenly allows his processors to access a cache of quantum surge energy that had been stored in him for some time. This power boost turns his body black, heals his wounds faster than they can be inflicted and sends his strength rocketing off the scale. Wheeljack laments that they're now dealing with a whole new kind of Megatron. 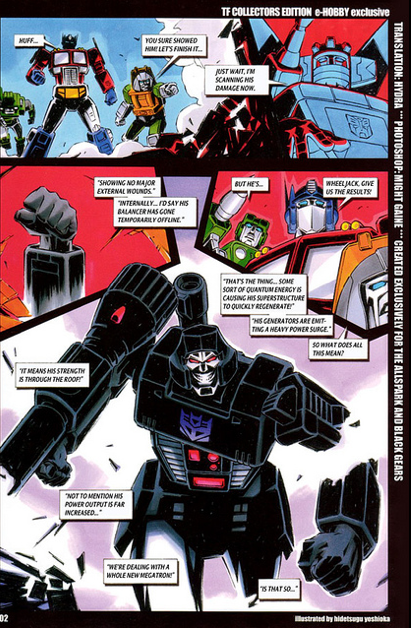 Megatron does not know where his newfound power has come from, but presuming it to be divine intervention, decides to use it to his advantage in an all-out assault to crush the Autobots.

I had never actually seen this comic before, but I think little touches like this can certainly make and even justify, from a non-monatary perspective, on the issuing of another redeco figure.  As a buyer I absolutely appreciate it when little extras like this are thrown in.  You-Tube reviewer Optibotimus makes this a point of contention as well;  mind you, his mostly refer to newer products coming out with very high price points, but when a consumer is shelling out money past a certain point, it's nice when the manufacturers give their consumers a little extra for being loyal fans (the most recent and best example I can think of quickly would be Hasbro's release of MP Soundwave with the five cassettes included, as opposed to Takara's individually sold pieces…….I of course bought both just because it's Soundwave.)

Okay, so now that I've gone through a bit of the backstory for some of the reissues and their place in the timeline, let's get down to the "brass-tax" as they say.

Why did I buy Megaplex?


It started after a recent visit to my fellow collectors "M's" house.  Pulling out his trusty TF buying iPad, he pulled up a listing and wanted to know what I thought about an eBay listing for Megaplex that he had found.  To be honest, at the time I had really just considered it be be another redeco and that's it.  I already had so many other reissues of Megs that to go out and get another one really wasn't on my priority list at the moment since I still don't even have a G1 version because I haven't been able to find one that meets my standards.

I told "M" it looked pretty good, but it certainly was an expensive figure.  He justified it saying that this guy is rare and doesn't pop up very often for sale.

Another of the reasons he was even considering picking it up was that this seller was from Canada.  One of his concerns, and it is valid here in Canada, is that when importing figures that resemble guns, Canadian Customs can sometimes open it and glue those stupid orange plugs into the end of the barrel….or there is also a chance you might not even get the figure at all.  At least being shipping within our borders, you would have a lot better chance of nothing being done to your item.  Including Megaplex, I've personally had two MISB Megs come to him not being tampered with, but to buy one outside of Canada I would be extremely hesitant about, especially if you pay MISB prices and run the risk of it being opened.

"M" and I chatted some more about upcoming figures and then I had to leave.  Later that night I started to look some more into this figure….and the more I look the more I liked what I saw.

Yes, I really liked what I was reading and seeing.  There were still number of days left on the auction but I wasn't going to just grab this listing since "M" had found it so I wanted to wait and see if he finally decided to buy it or pass on it himself. One day from the listing ending I got a text from him saying that he had just stumbled across another Megaplex by chance offline and had snatched it up right away.  It was MIB, but cost half of what the eBay one was going for, plus no shipping.  BOOM! I bought the eBay one up right away.

I had prior to that, sent the seller an email out of curiosity to see if they would lower the price a bit, but they again reiterated what "M" and my searching had told me…."it was a very hard figure to come across" so no price reduction.  Fair enough.

So…..after all of that, let me go through what all my reasons were for this purchase: 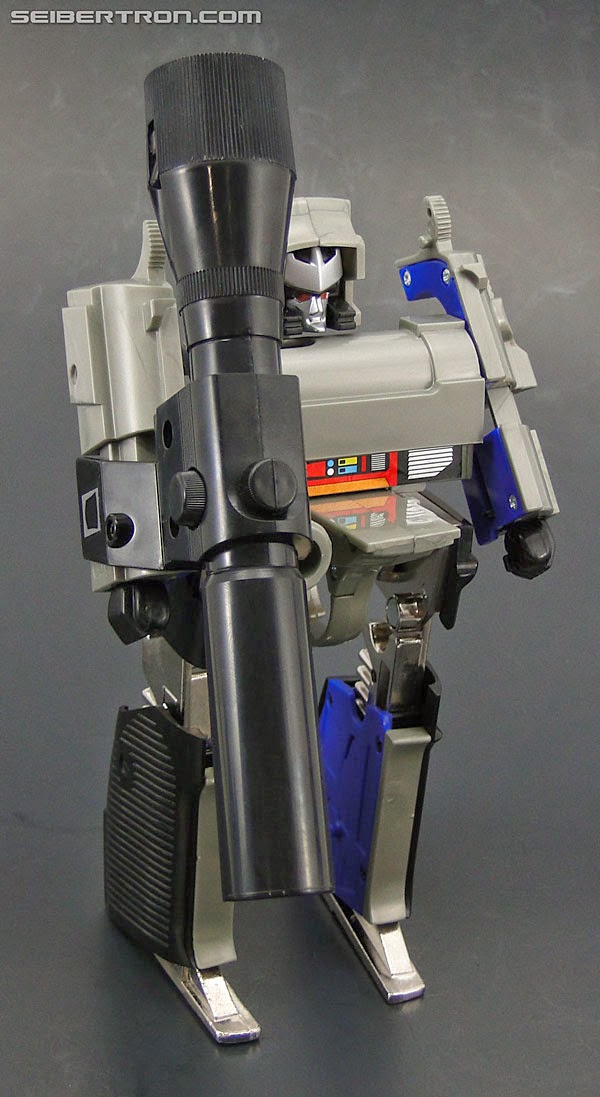 I think I may have exhausted all I can say about this figure.  You know the backstory, timelines, the differences in picture comparisons, my reasons for grabbing it.

You have to ask yourself now if you don't already own this guy, should you start your hunt for one now?  If you are a Megs', redeco, rare collector or e-Hobby fan then yes, you need to have this particular piece in your collection.

I know for some of you, buying another version of a character that you already have may not seem that appealing, especially at certain price points, but you have to ask yourself, do you pull the trigger (pun not intended) now, or just pass altogether and focus your collection elsewhere.

I think the best note to end on with would go back to my reasoning on this particular form of character never being officially made again.  Too may legal issues and repercussions are at the root of this and I don't see the manufacturers assessing that the risk is worth the profit.   Less and less quality boxed figures are showing up for Megatron, as more and more people are hoarding them for this reason alone.

So why not hoard one more visually stunning character for yourself and grab this guy….if you can.

Posted by acdecepticon at 12:58 PM