I like watches. It's that simple.  Even though I only own 3, I'm sure I could find the room in my drawer to add this beautiful one to my collection. Takara made this line of watches back in the first half of the 80's which doubled as mini transforming robots. Well worth the price "back in the day".  As long as the price sticker isn't covering a lot, or any key parts of the artwork, then I love to see it on these items since if it is also a known store it can also help validate the legitimacy of the figure. Wow! Take that Sixshot!  Name another toy that is a six-former out there.  To be honest, you probably could name a lot if you really stretched your imagination like the depictions on the back of this card. 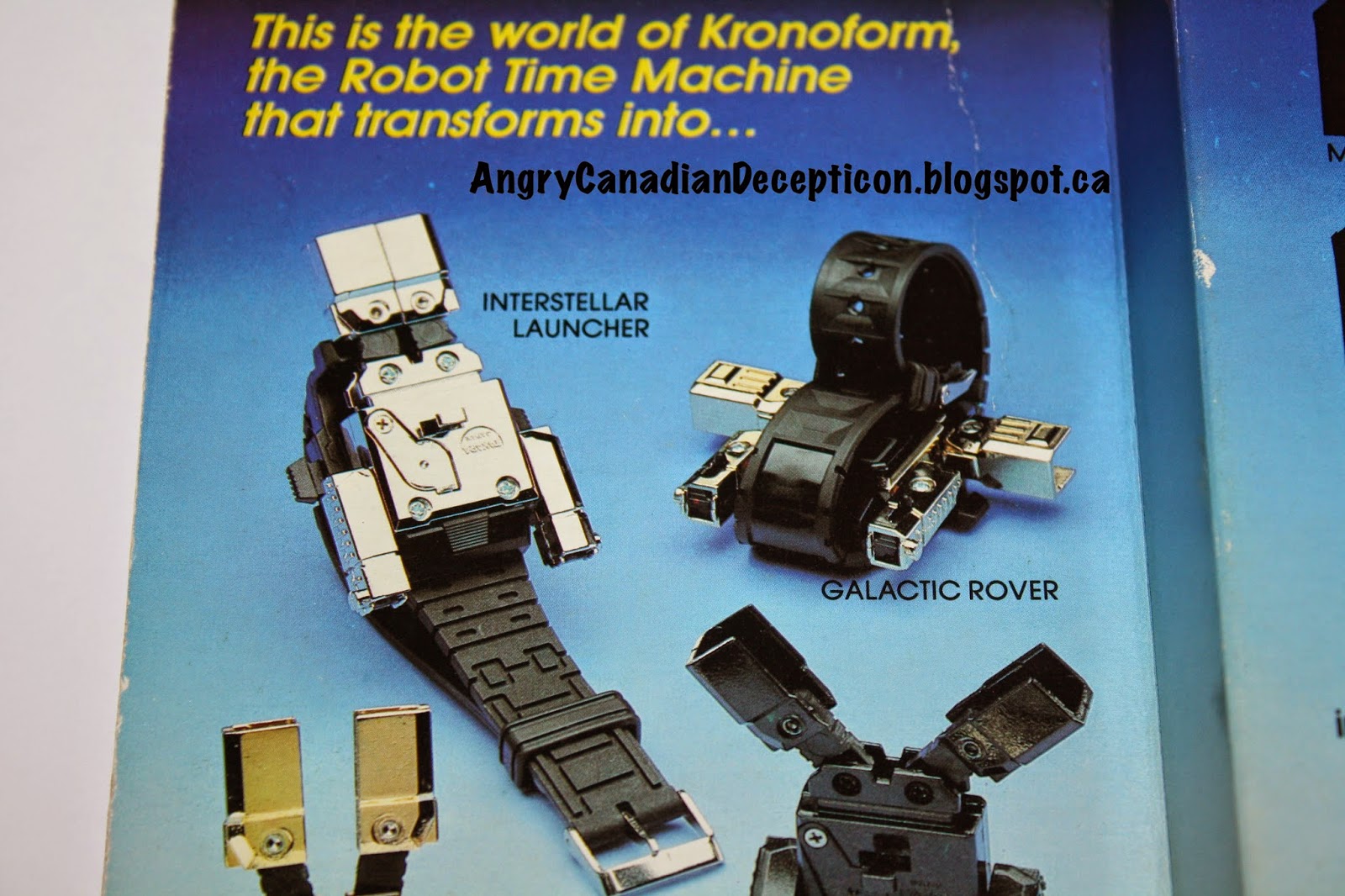 I'll be honest, the only two that I wouldn't have to take mind-altering drugs to see would be the top two; "Interstellar Launcher" & "Galactic Rover".   The only issue with these two forms is that I would never attempt them with a vintage figure like this because I couldn't really determine how brittle the watch band has become after all these years and I would hate to crack it. 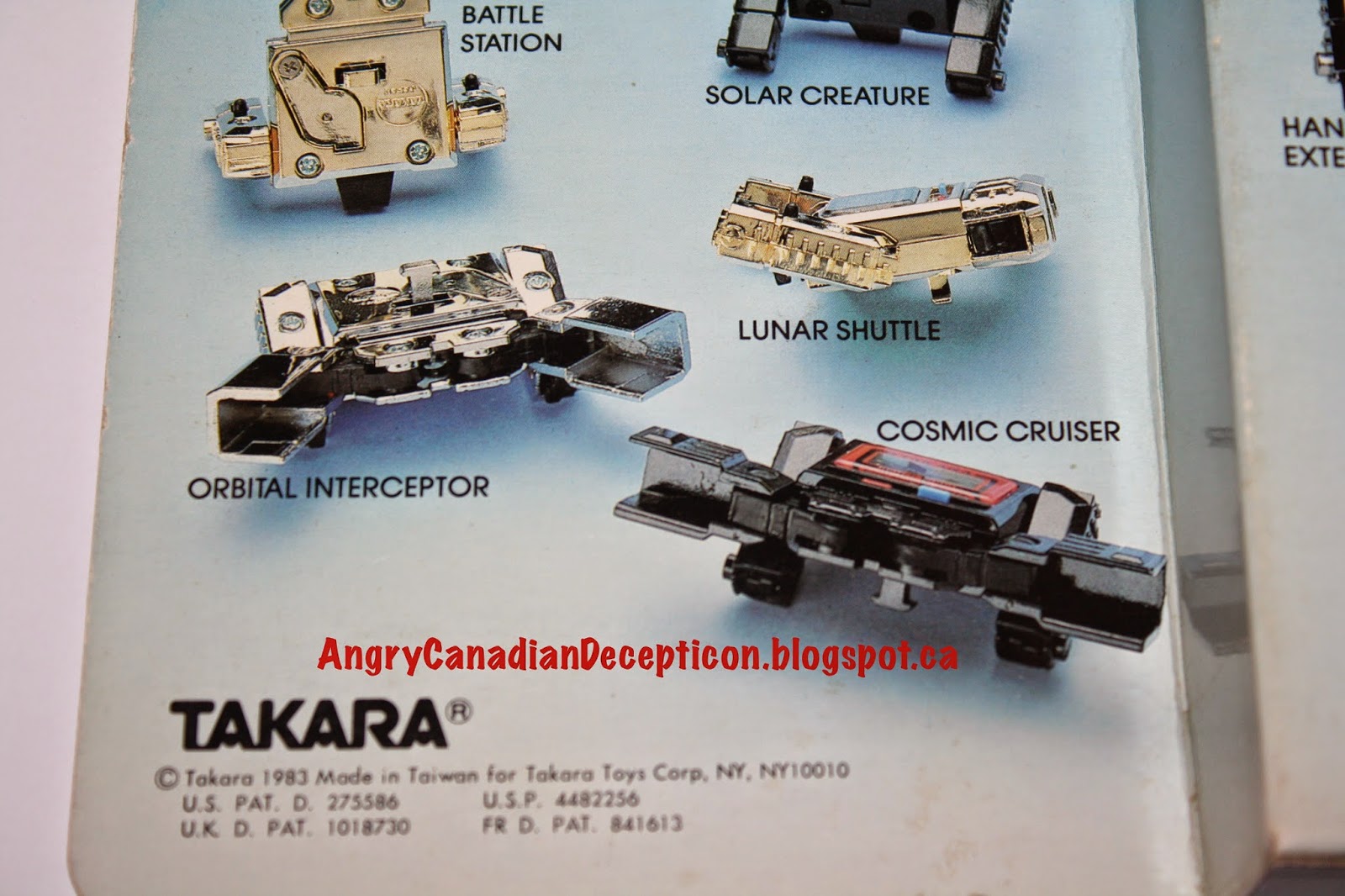 The two middle modes are really just break-dancing robots while the bottom forms are  the watch off the band with the arms extended.....I would have loved to have been in the pitch meeting for trying to promote this guy.  It probably went something like this..." Okay, it's a watch, but it's also soooo much more!  IF you take the band and fold it over...Voila! Now a ramp to launch a ship....or, if you put the robot on its head the kids can pretend the legs are missile launchers!" 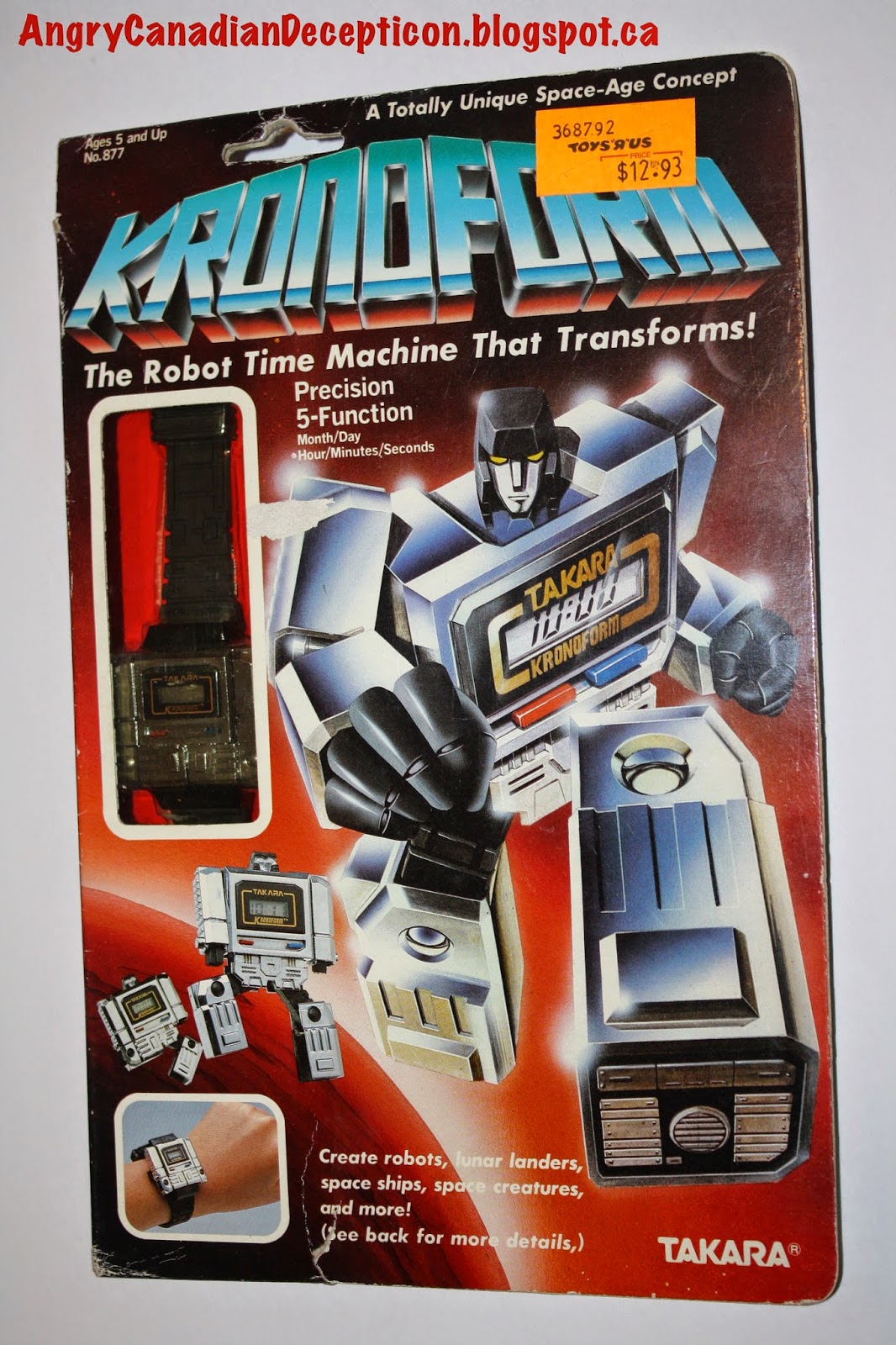 Another shot of the front.  I really love how they were able to display the artwork so predominantly along with showing off the item as well. 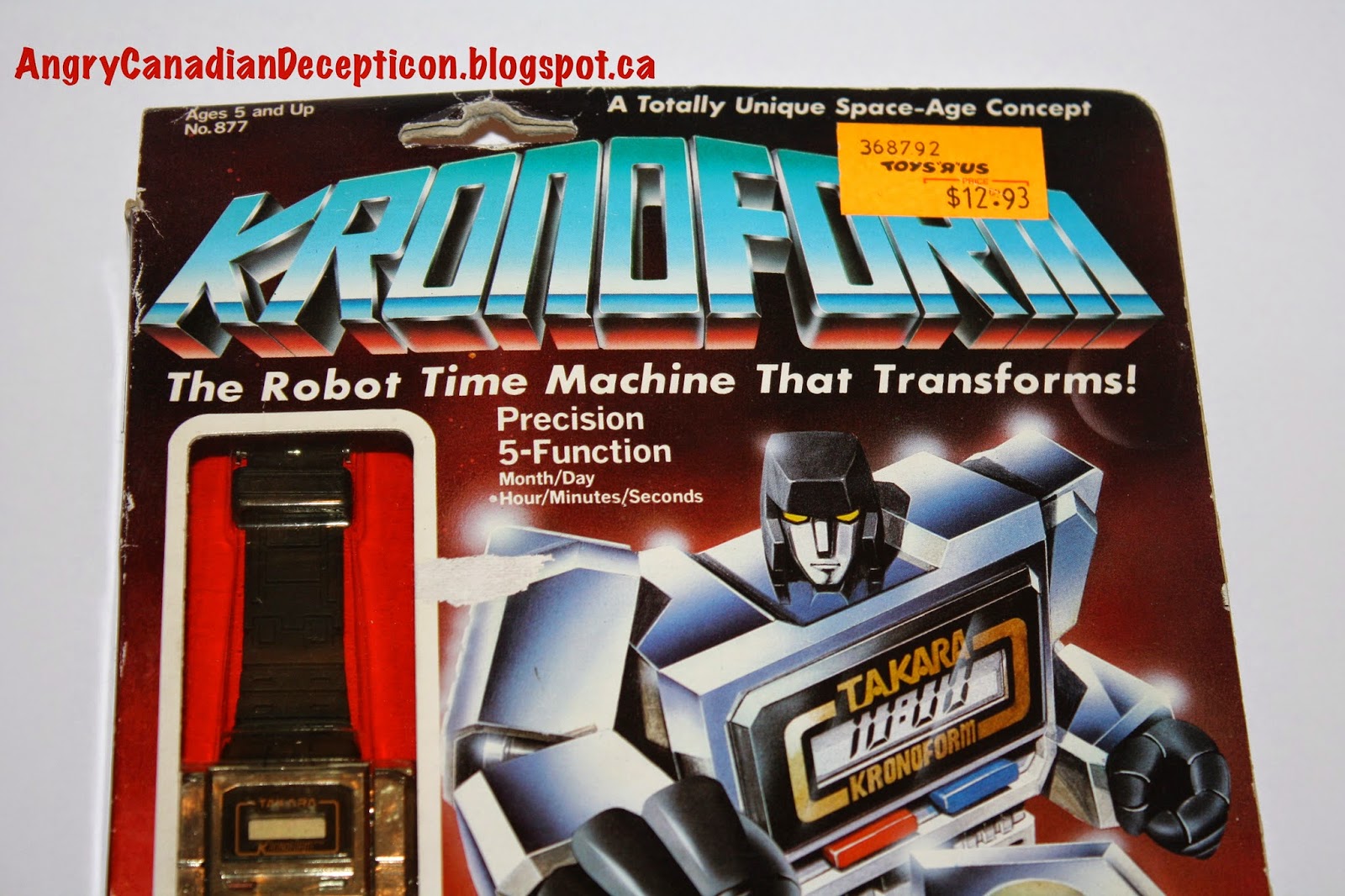 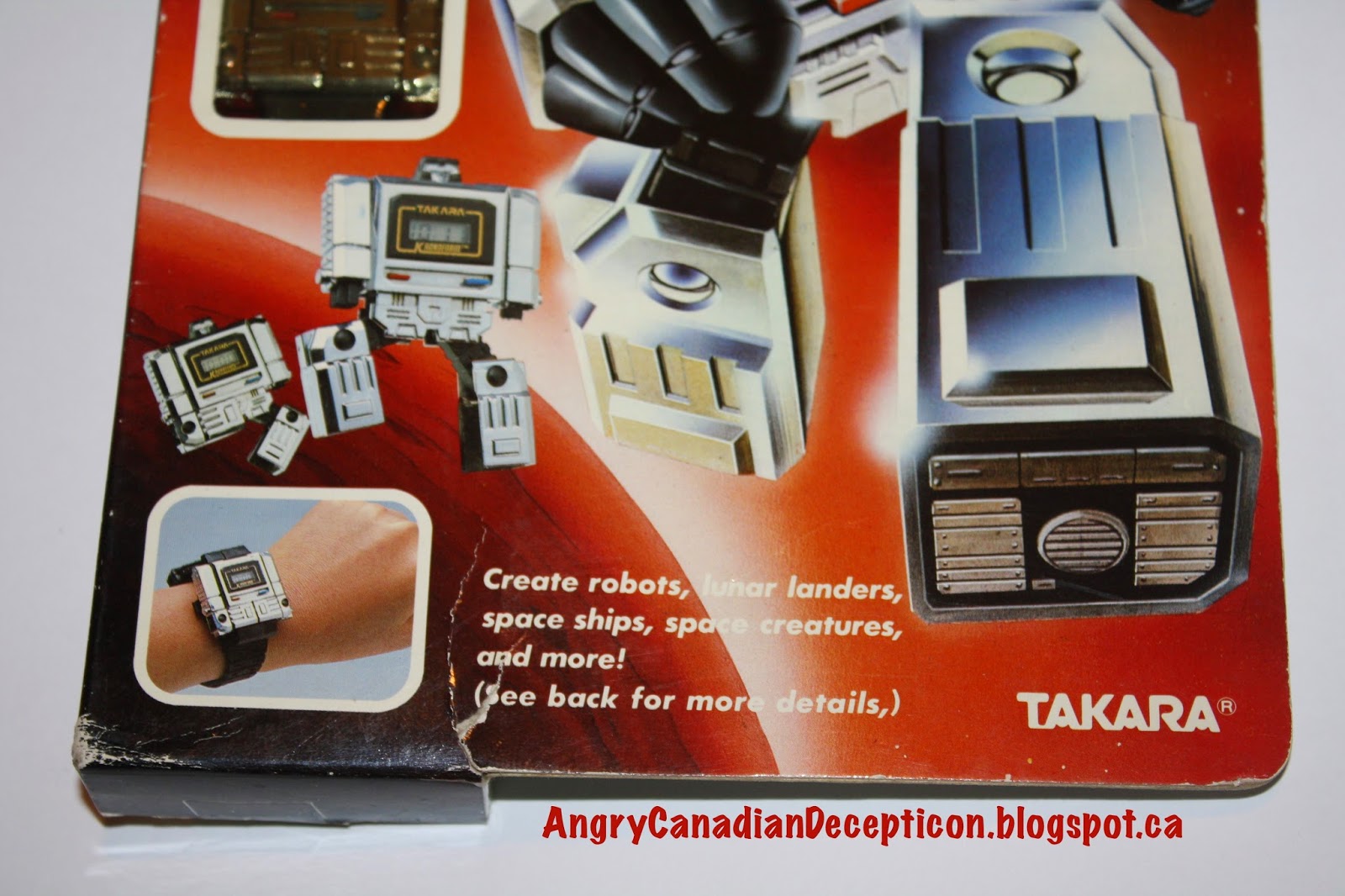 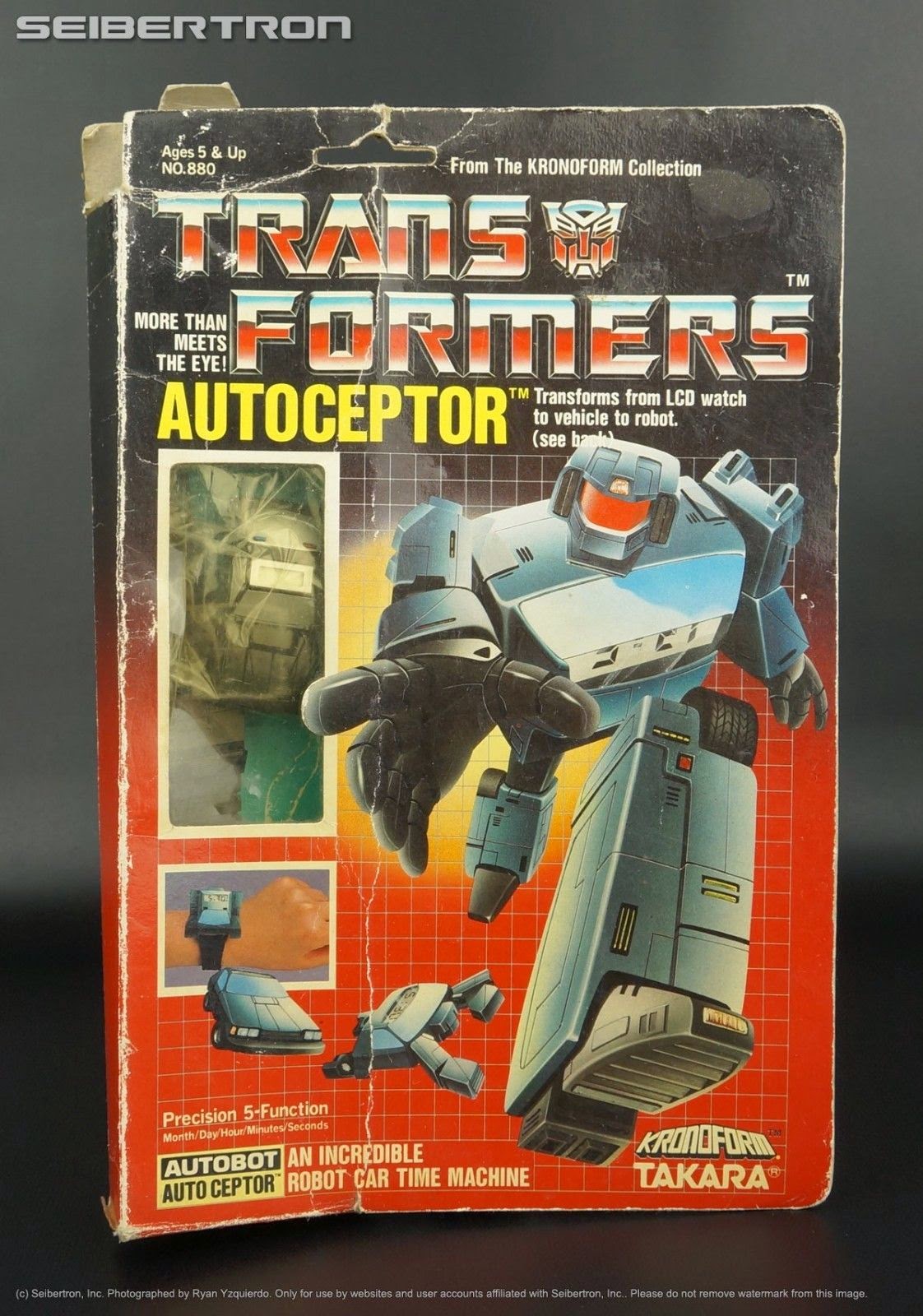 If you look at the top of the above picture you can see the line, "From The KRONOFORM Collection".  This was due to Hasbro taking the remaining leftover boxed figures from this line and just rebranding them as Transformers. 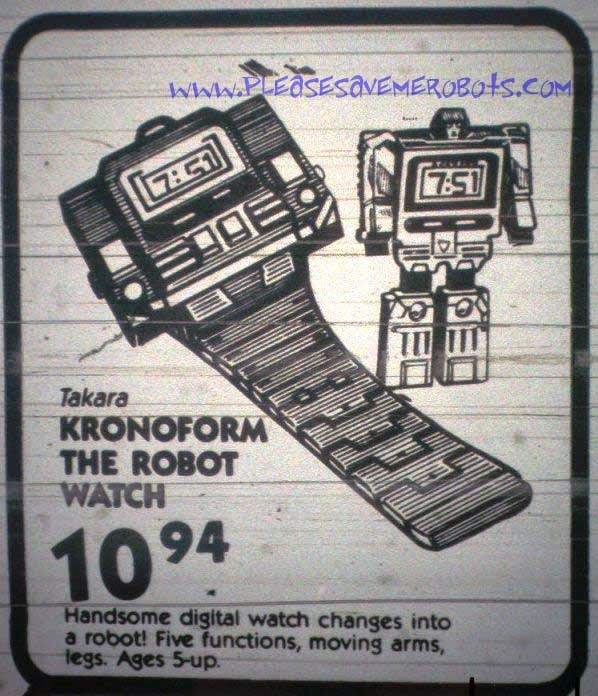 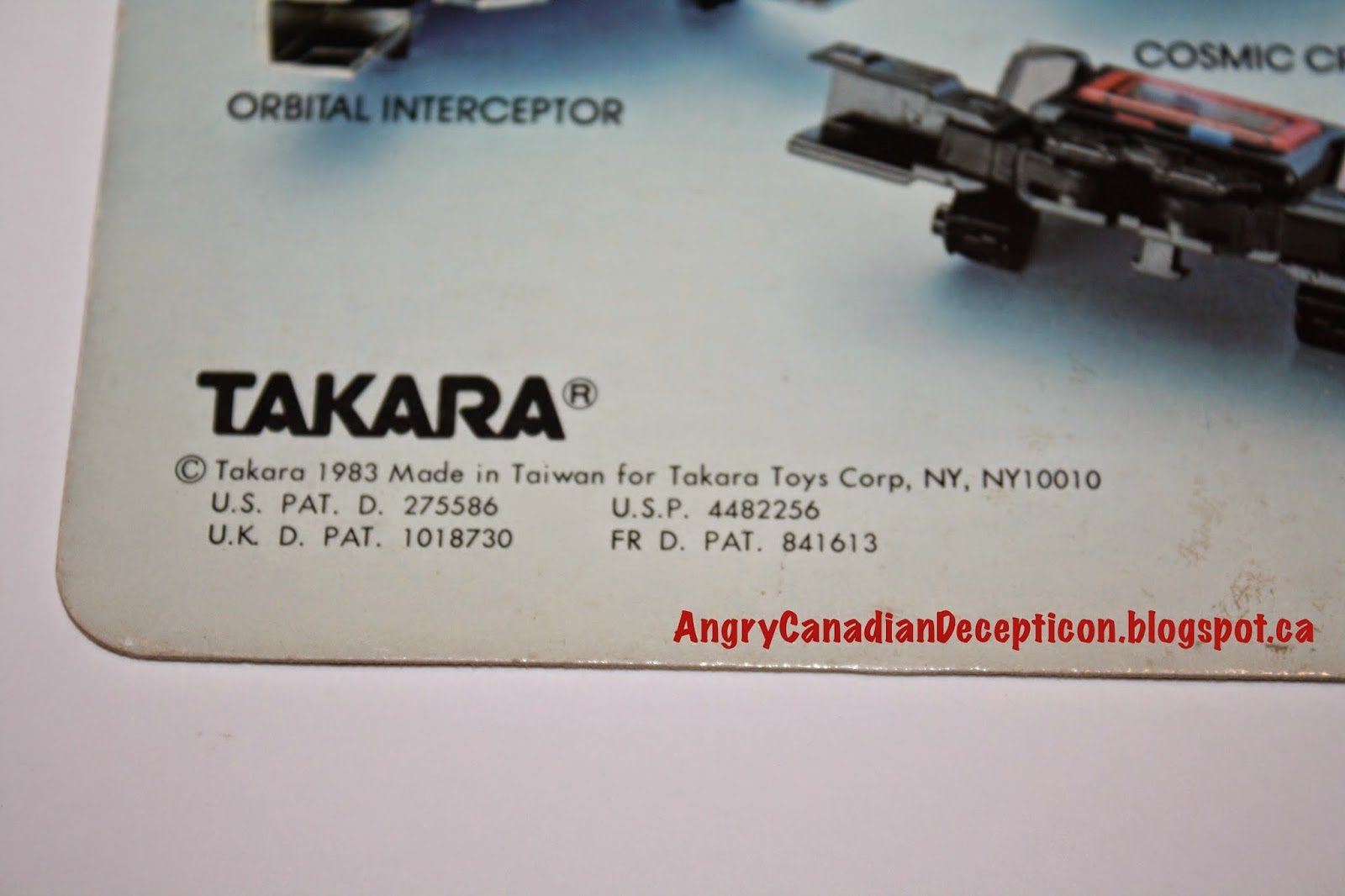 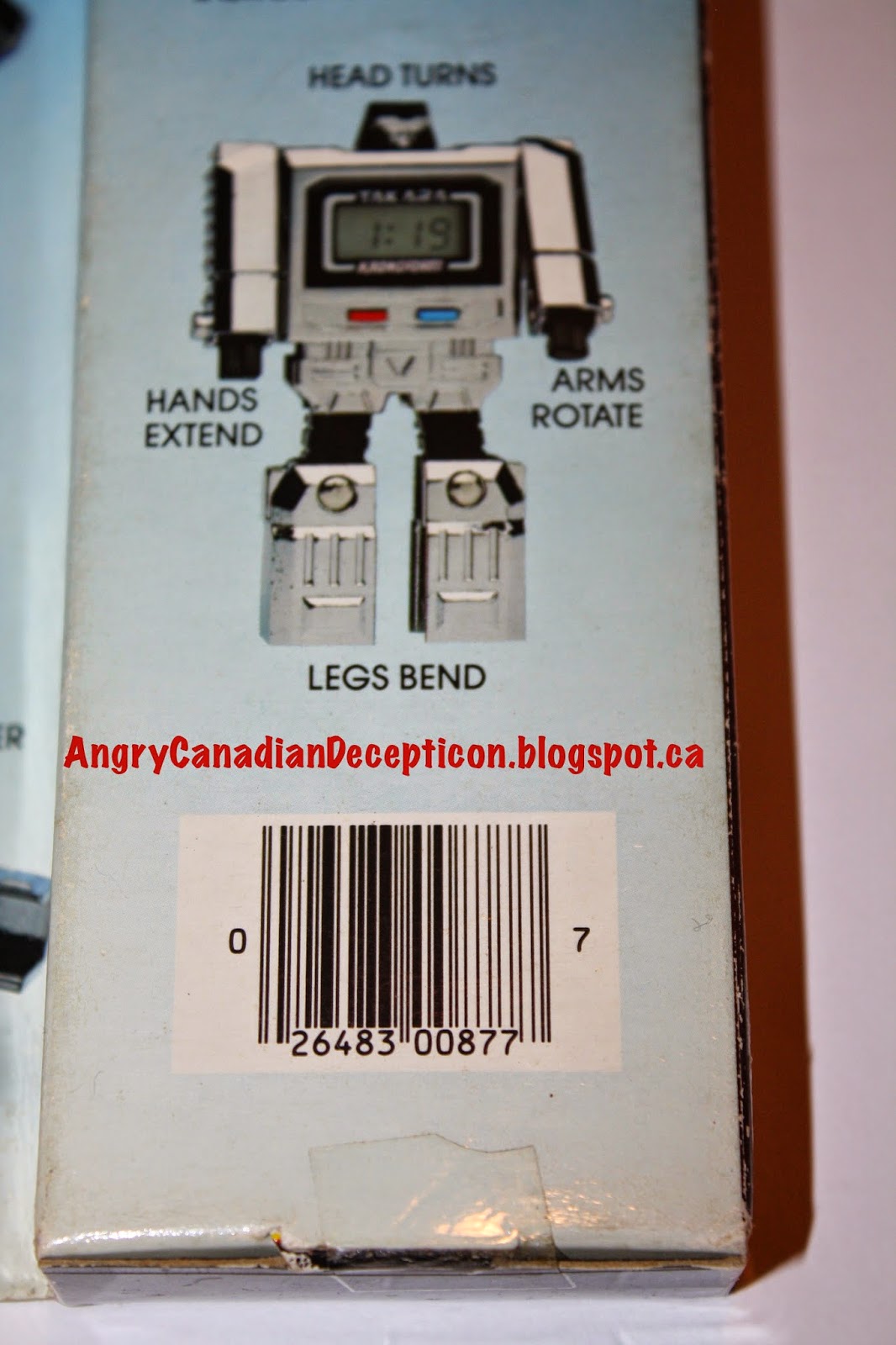 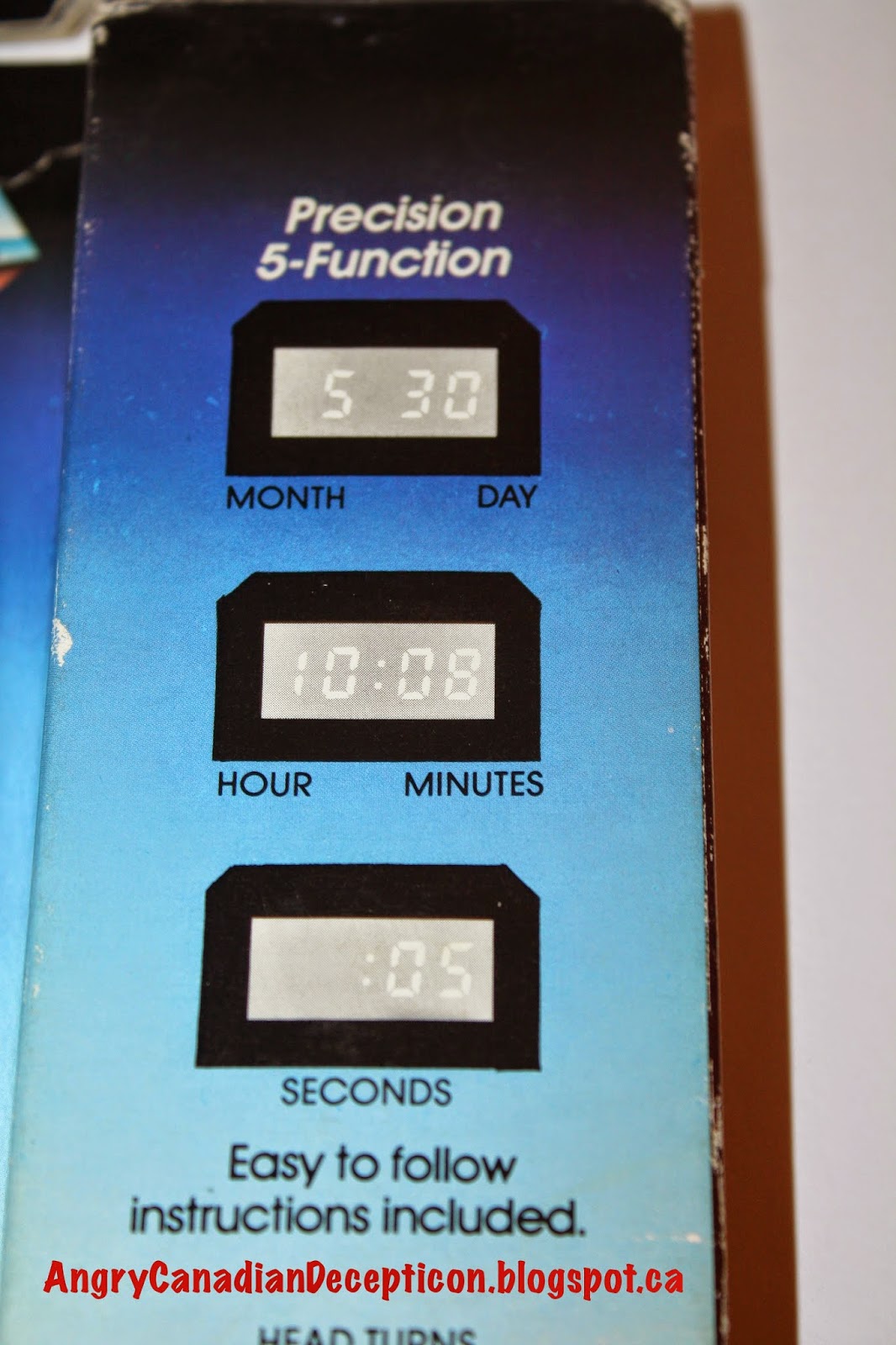 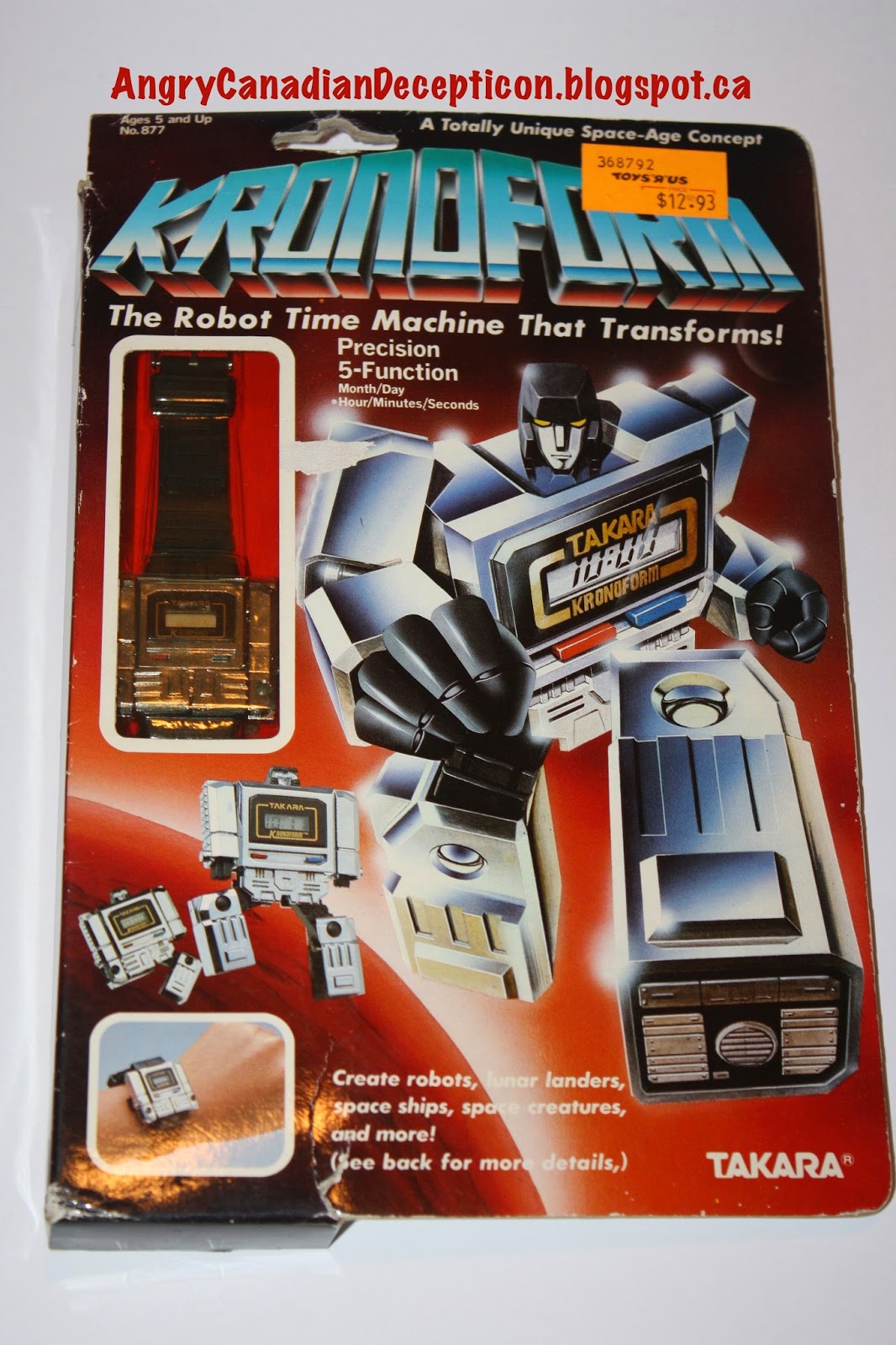 I'll admit that I never really hear people talking about collecting these figures very often, but I still think that they are a classic figure of the Transformers line.  I can't remember if I had a legit version or KO but I do remember having one along with a bunch of my friends. I'm sure that I never really took good care of it either and I certainly didn't keep the card but I do remember playing with it for quite a bit, especially since I could take it more places than any of my other Transformer figures......and in the end, isn't that what is really the important thing....keeping Transformers with us wherever we go, be it in our hearts or on our wrists.

THANKS TO "M" FOR THE USE OF THIS PIECE
Posted by acdecepticon at 12:39 AM