Here's a set of pictures that I've been sitting on for quite some time but just had completely forgotten about until I was going through my drafted items.
What a shame that I didn't post these three guys sooner because of how nice they are. 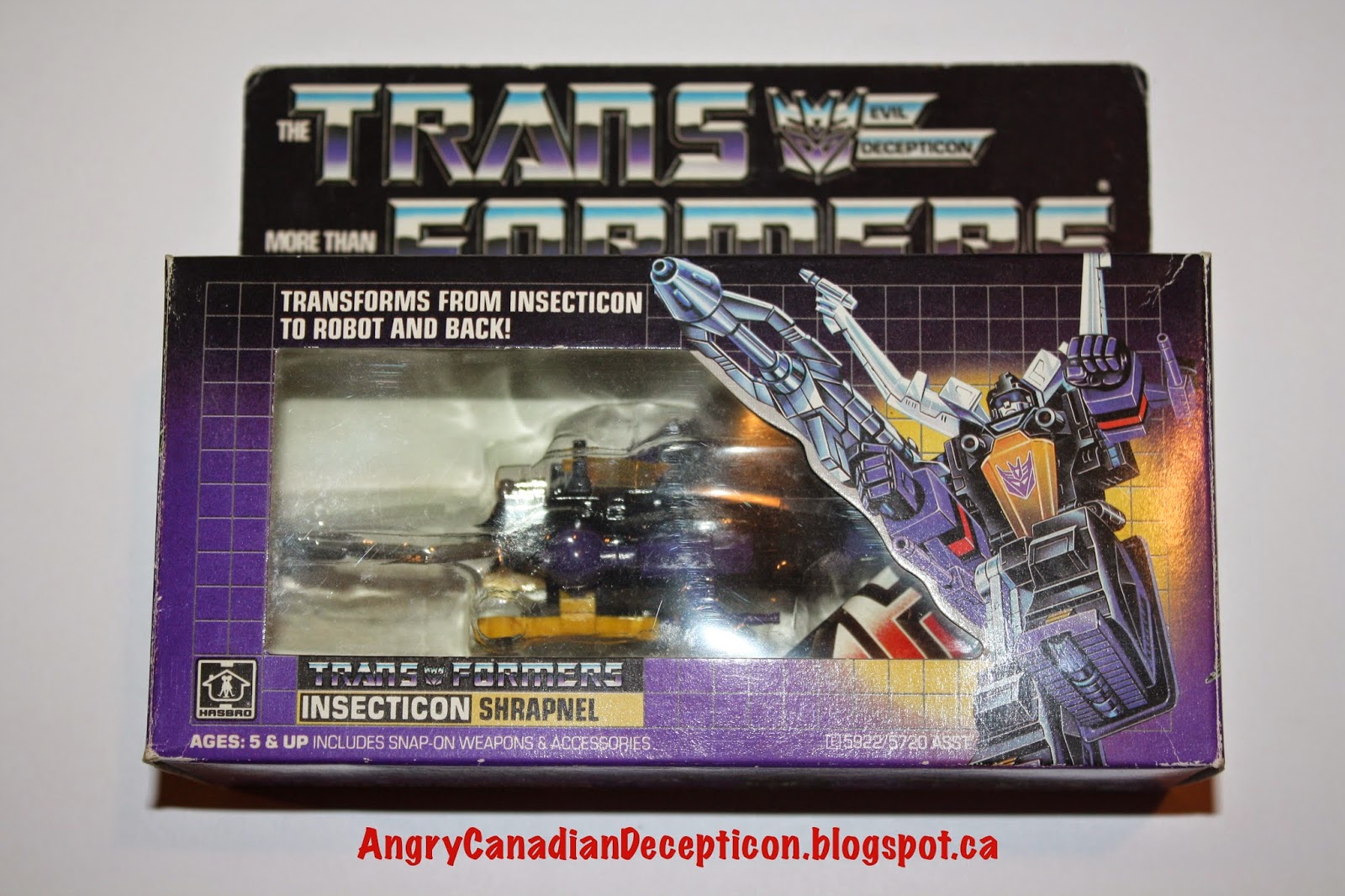 In Japan, Shrapnel and the other Insecticons were "re-released" as mail-order items from 1987 through 1988. They each cost 880 yen (their normal retail price) and two robot points.Shrapnel transforms into a robotic lamellicorn, or stag beetle. He doesn't do a whole lot more than that. Like the other Insecticons, he has a variation on his chromed parts, but this one is on his gun. Some Shrapnels have "fins" on the very back-end of the rifle and a more detailed main barrel, while others (obviously) lack those details. The extra-detail versions appear to be a later run.


The eccentric way in which Shrapnel parses his dialogue may seem endearing at first, first. Others are soon to discover that his seemingly benign tic is merely the gateway to a frighteningly twisted and perverse mind, even for a Decepticon, Decepticon. A master of electricity, his dark desires put this skill to use on his victims, victims. Nothing delights him more than to see how they squirm from his touch, touch. 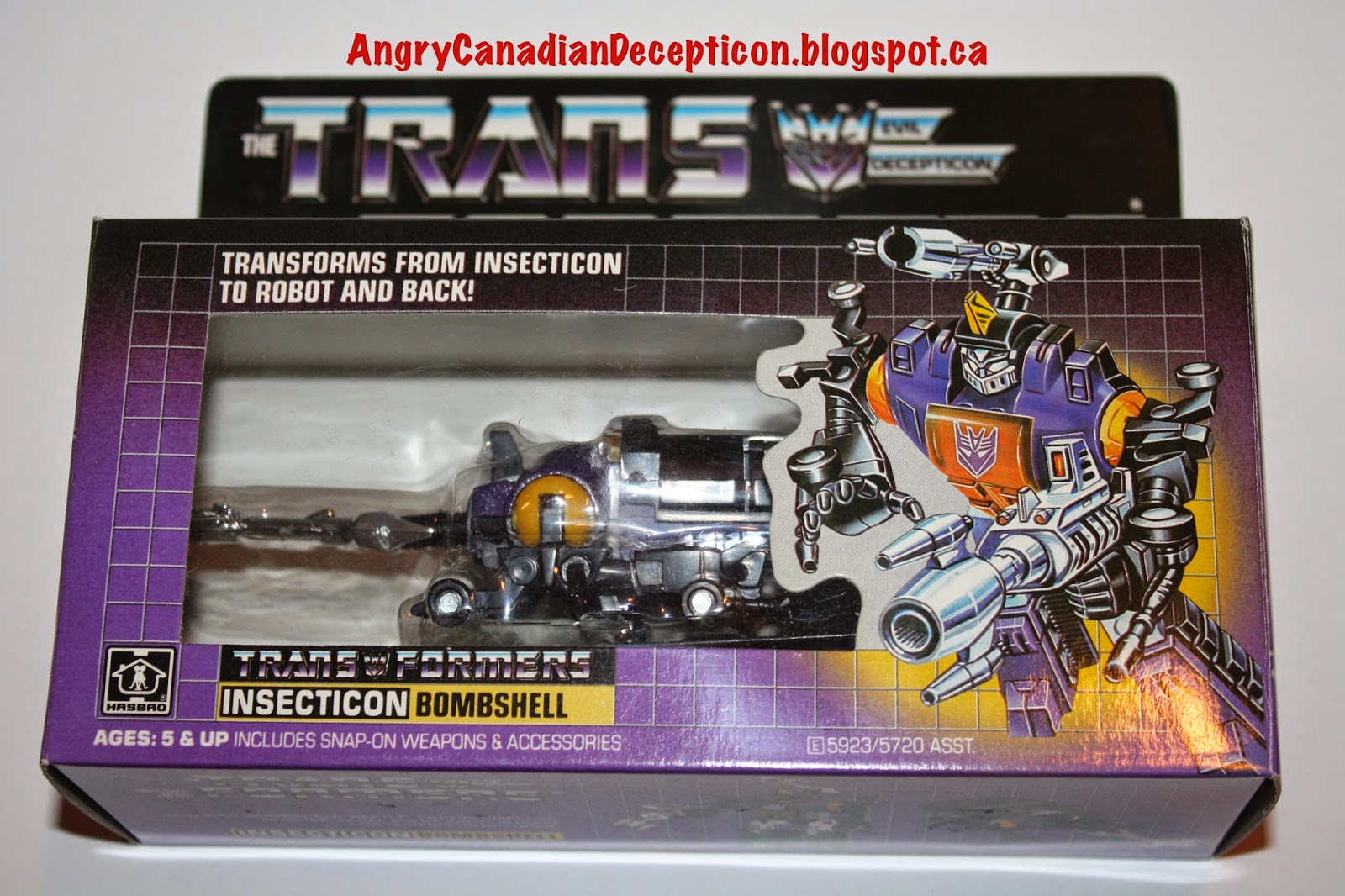 Bombshell transforms into a robotic rhinoceros beetle. He doesn't do a whole lot more than that. There is a variation on the mold's insect-mode horn; some versions have a rounded indent on the "top" part near the base-joint, allowing it to fold down further in robot mode. As a legacy of his past as a mold from the Diaclone toyline, he has an opening canopy that can seat a Diaclone driver figure.

In Japan, Bombshell and the other Insecticons were "re-released" as mail-order items from 1987 through 1988. They each cost 880 yen (their normal retail price) and two robot points.

This mold was used to make the Salvo drones.

A master of mind-controlling "cerebro-shells", the twisted Bombshell plays with the minds of others as a child would a new toy, enthusiastically and recklessly.
But there is nothing childlike about the gleeful malice he exposes in forcing his victims into more and more humiliating and destructive acts. Bombshell takes such sadistic joy in the destruction of his victims that even the other Decepticons can be put off, wondering if he wouldn't be just as pleased to play those same "games" with them...

His Action Master partner is Needler. He is sometimes known as Hardshell. 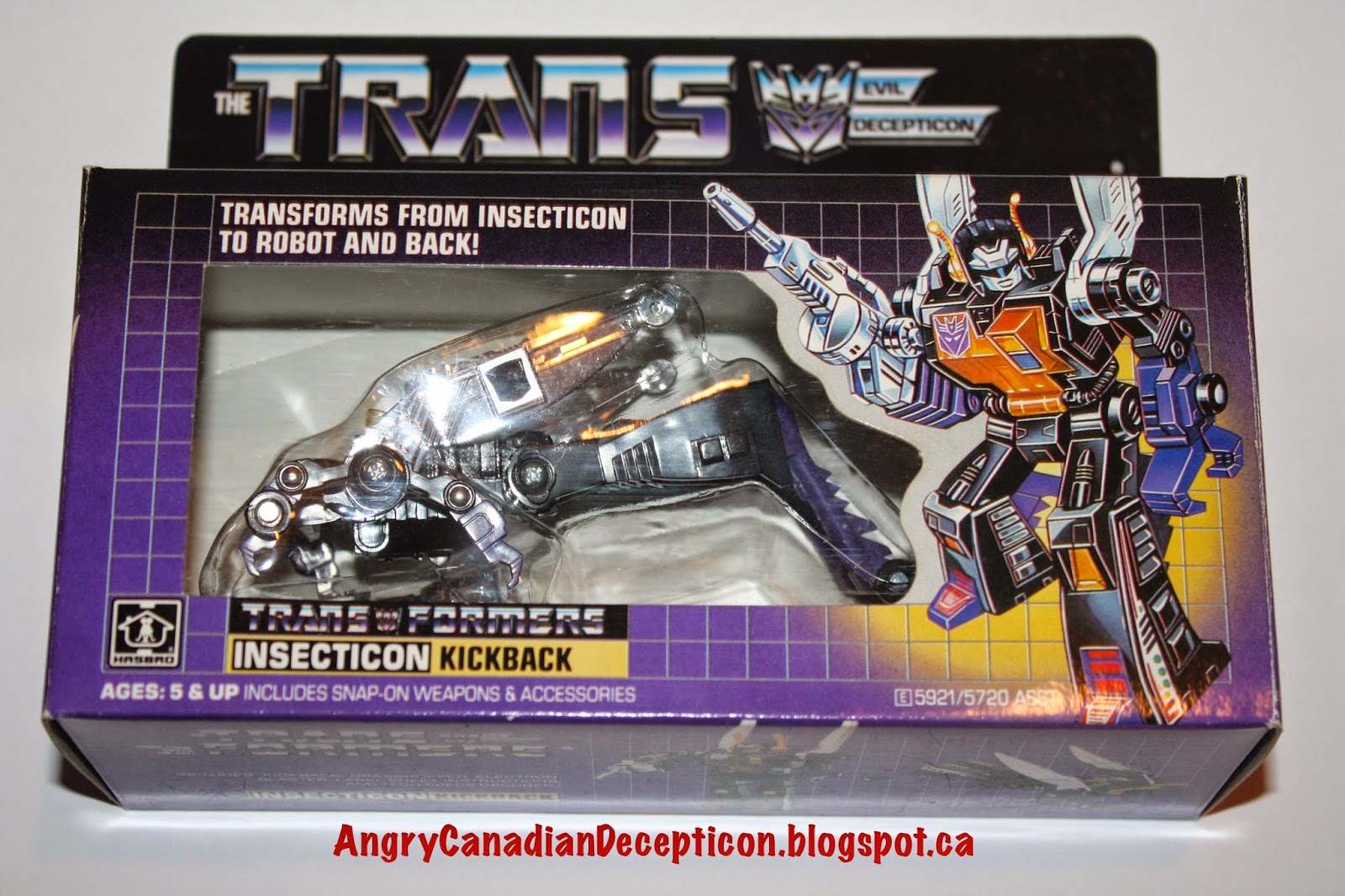 Kickback transforms into a robotic grasshopper/locust. He doesn't do a whole lot more than that.

The mold has gone through a few variations, primarily in the chromed-silver wings. Original versions only had a single rubsign indent, on the outer right-robot mode wing. Later versions not only added indents to all four faces of the wings (for symmetry, apparently), but shortened the wings as well, and rounded off the wing tips for safety reasons.

In Japan, Kickback and the other Insecticons were "re-released" as mail-order items from 1987 through 1988. They each cost 880 yen (their normal retail price) and two Robot Points.

This mold was used to make the Shothole drones.

Kickback is one of the most charming, likable beings you're ever likely to meet. He collects friends the way others do energon cubes. Scratch the surface, though, and you find a manipulative blackmailer that loves digging up dirt on his new "pals" to force them to work for him. Humans are particularly likely to fall prey to his honeyed words. In insect mode his super-charged legs allow him to jump great distances and kick through solid steel, though he's vulnerable in that mode when attempting to fly through high winds. 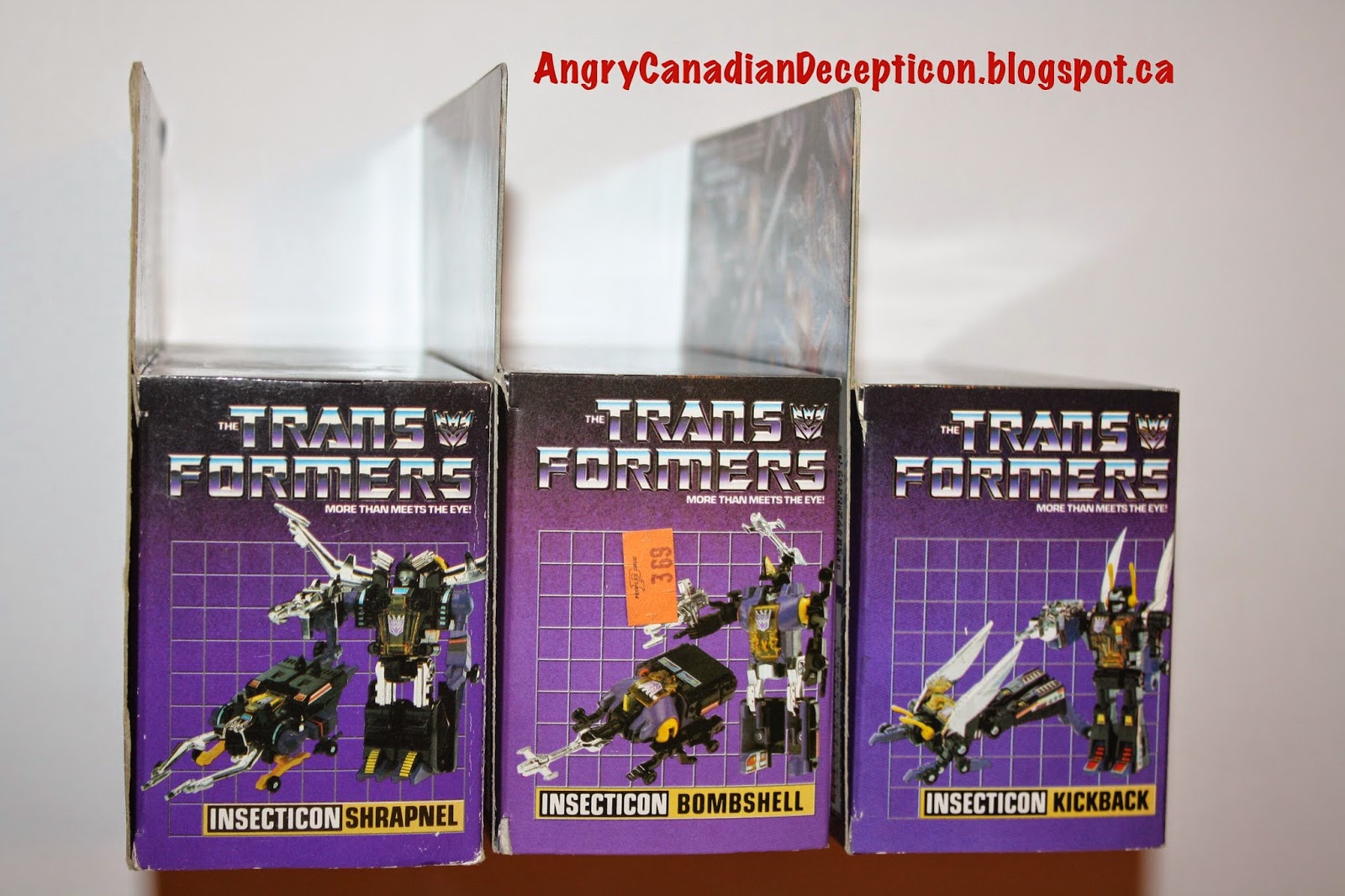 I have to admit that I am a big fan of having price tag stickers on boxes; as long as it's not covering up any important artwork. 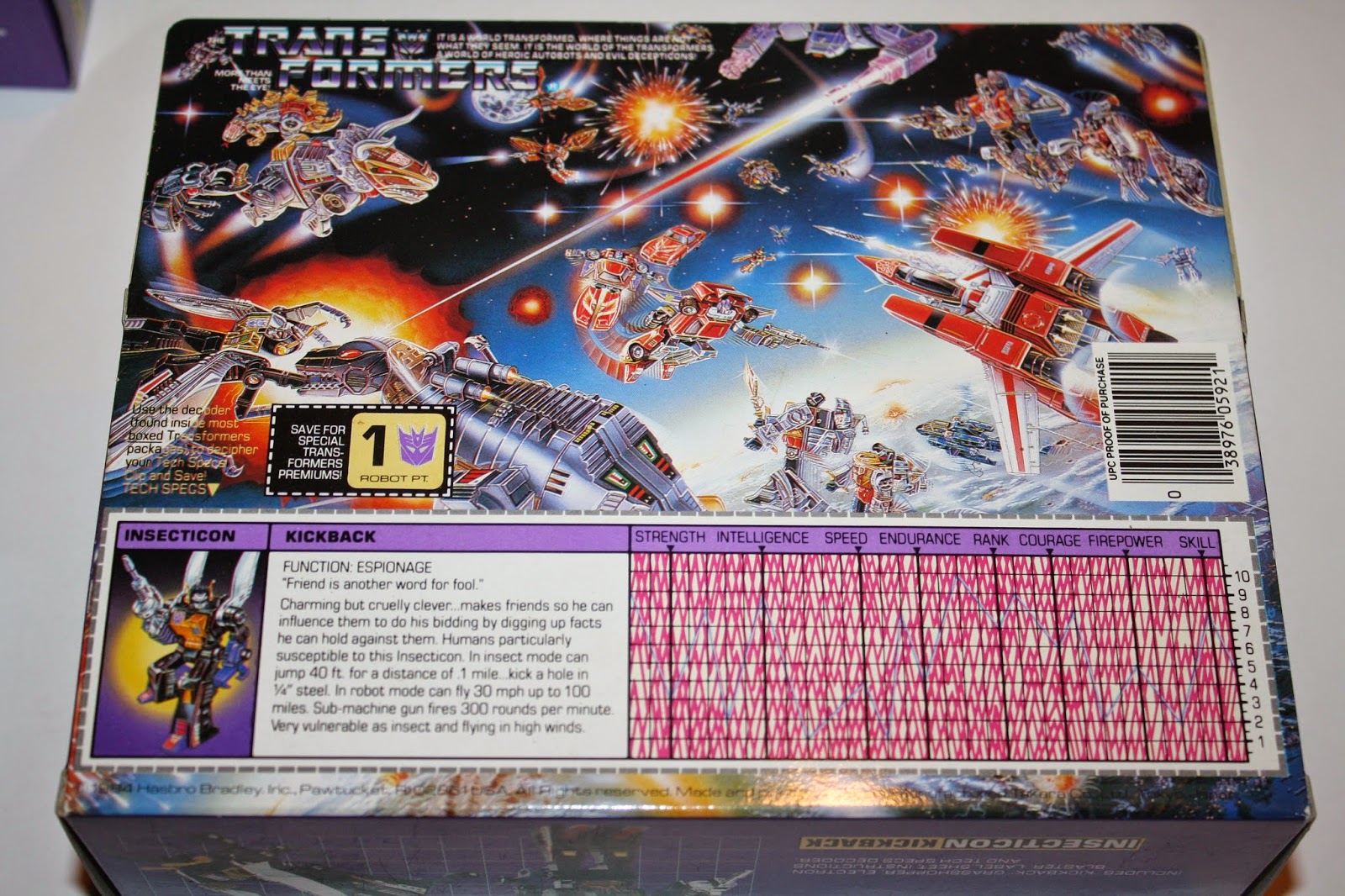 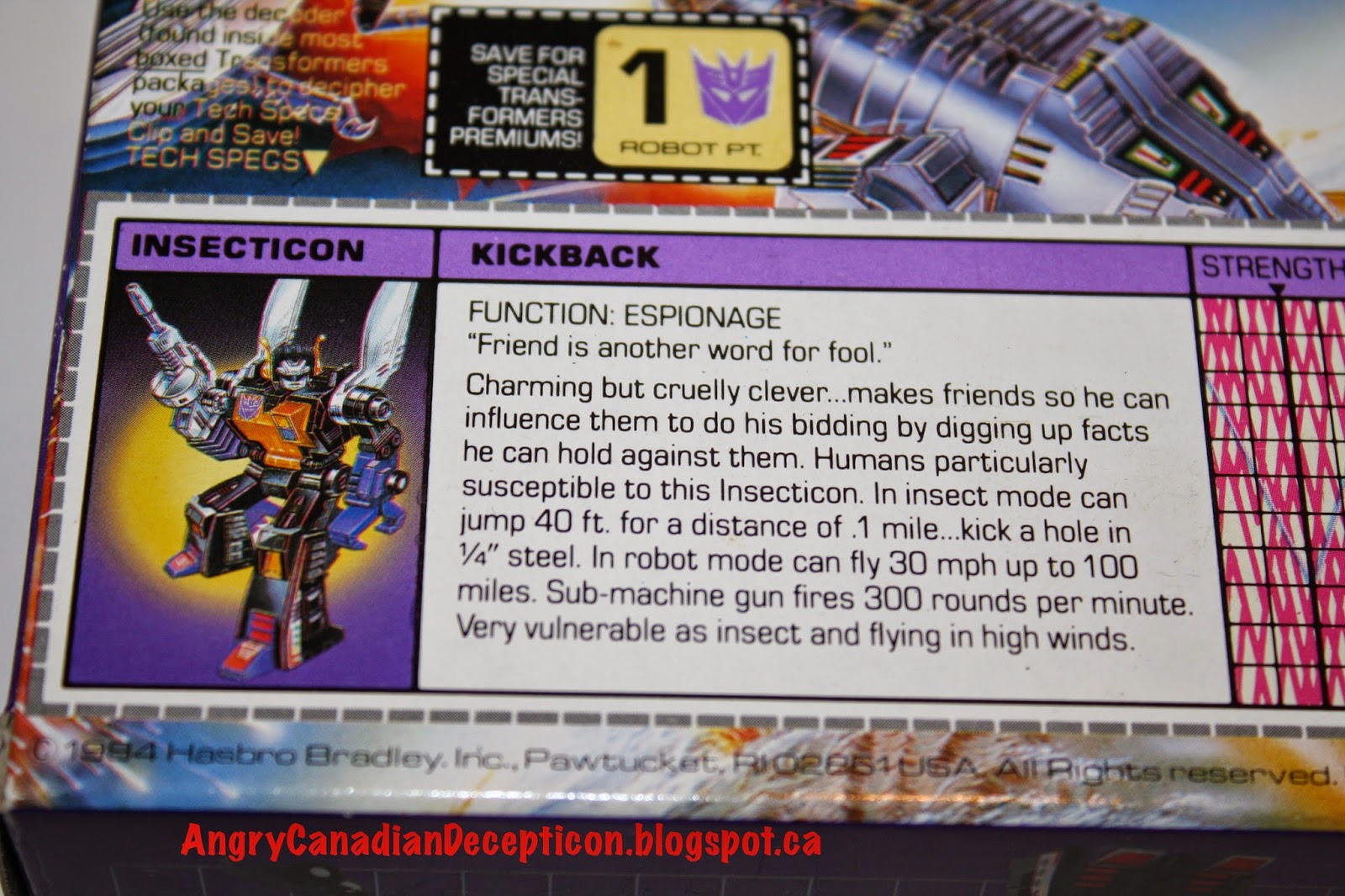 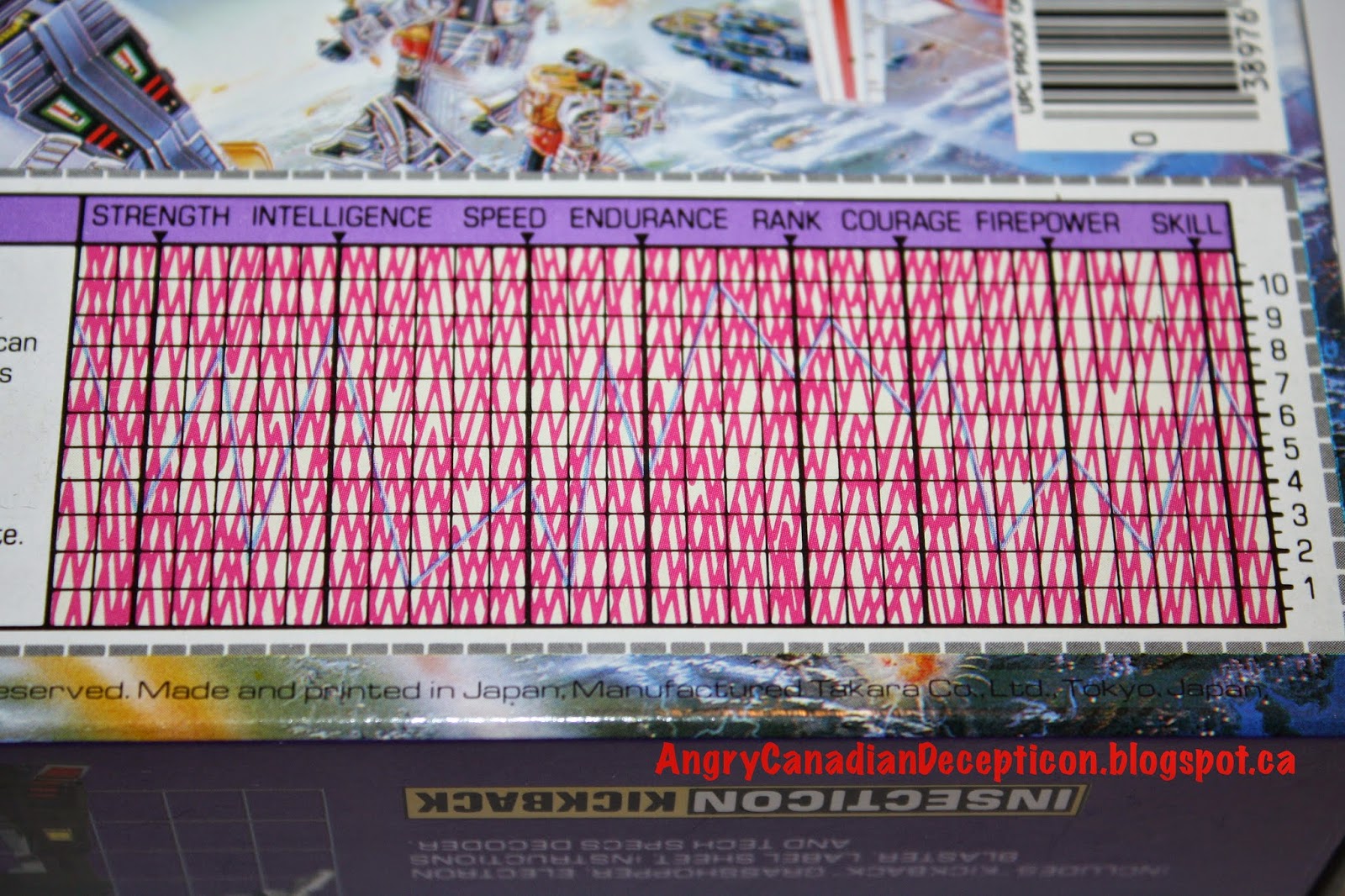 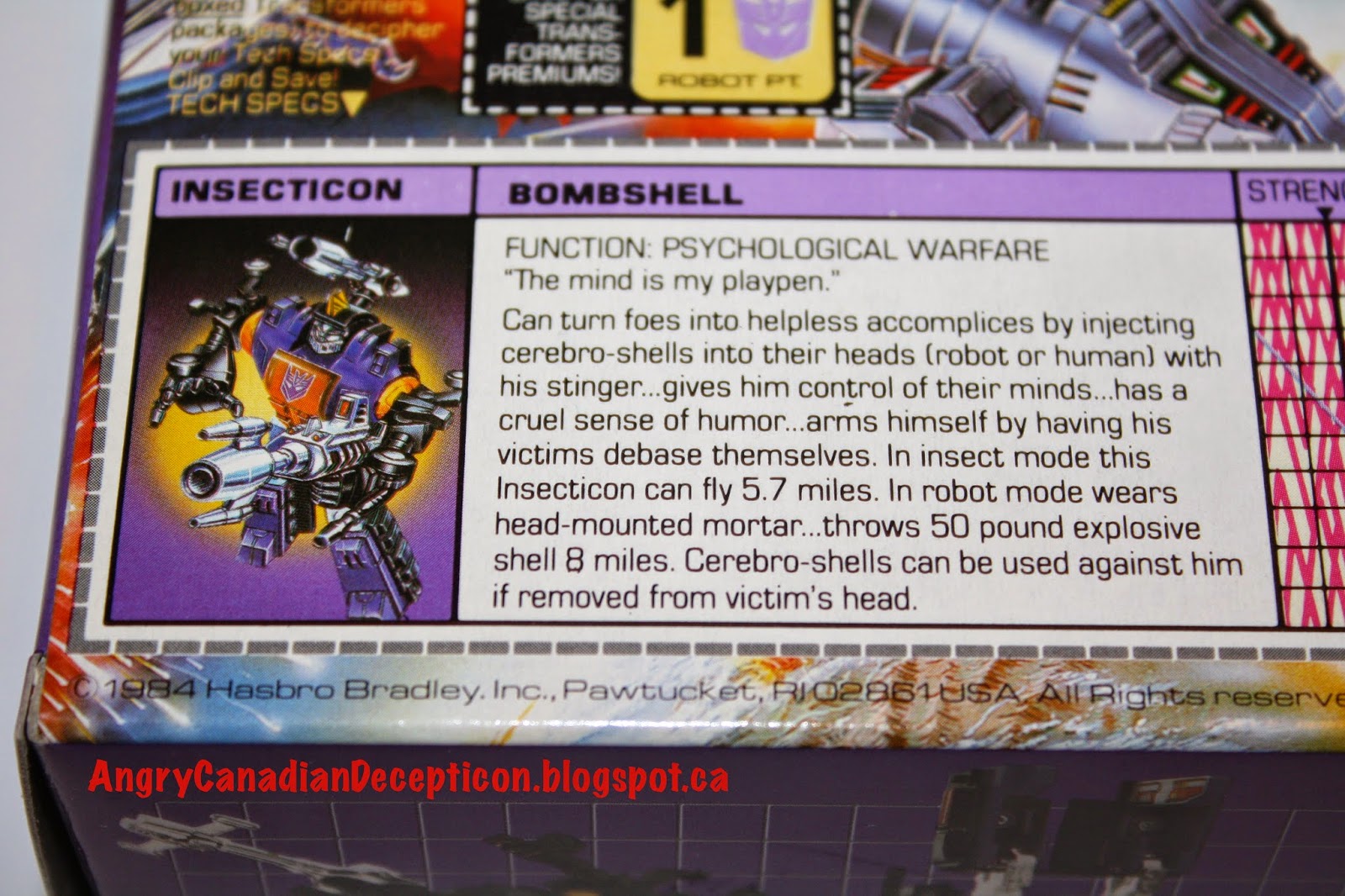 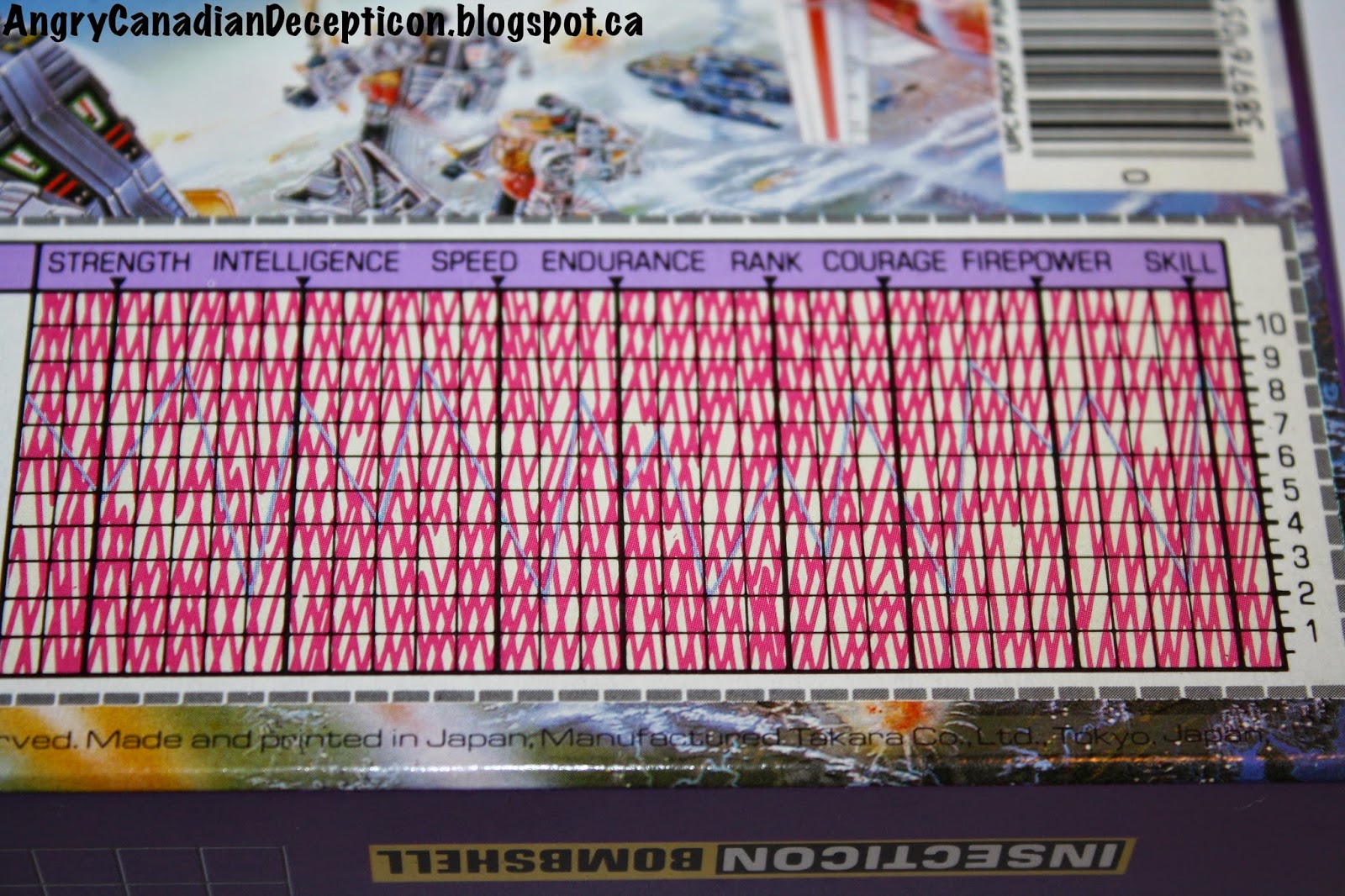 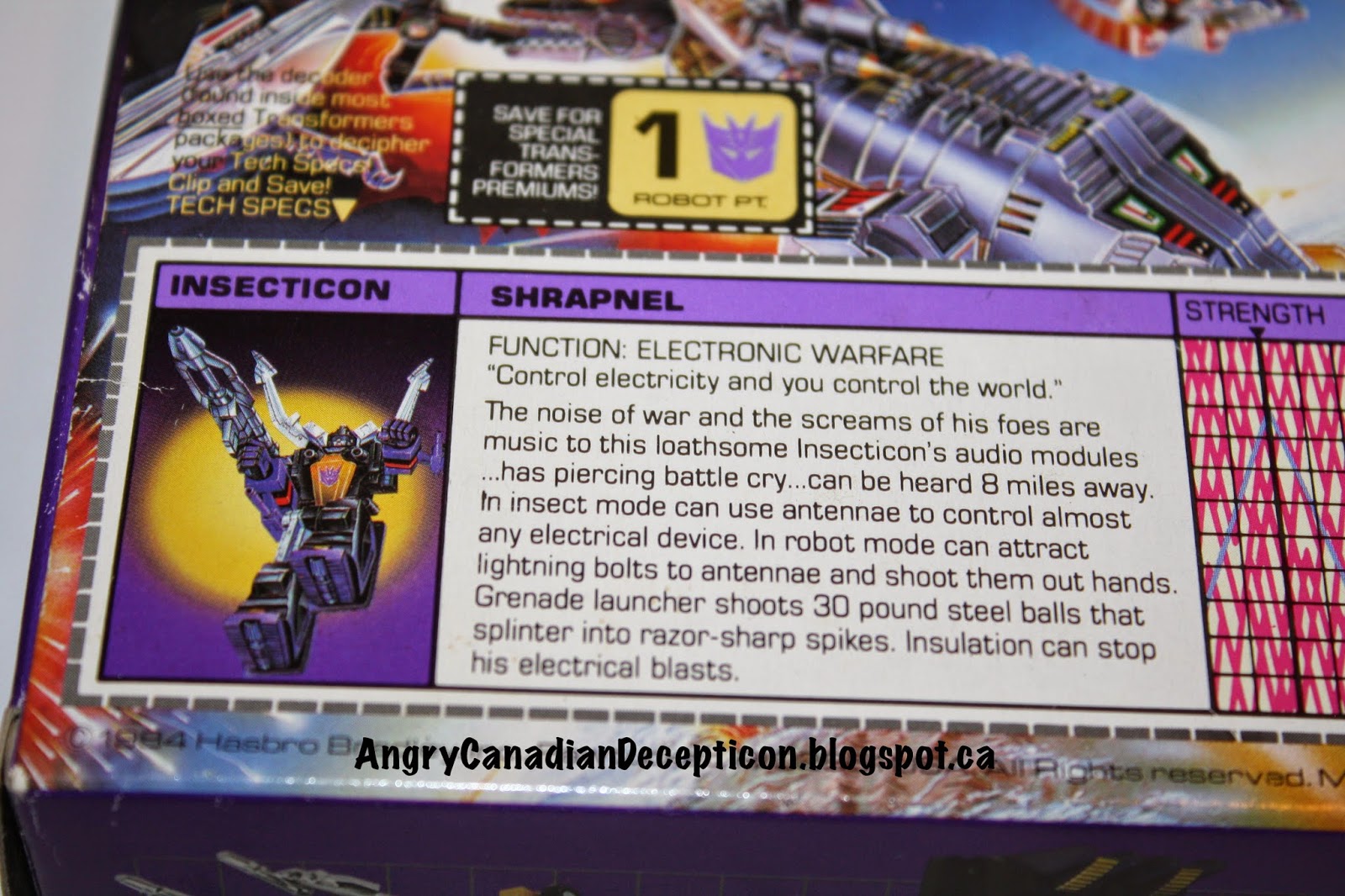 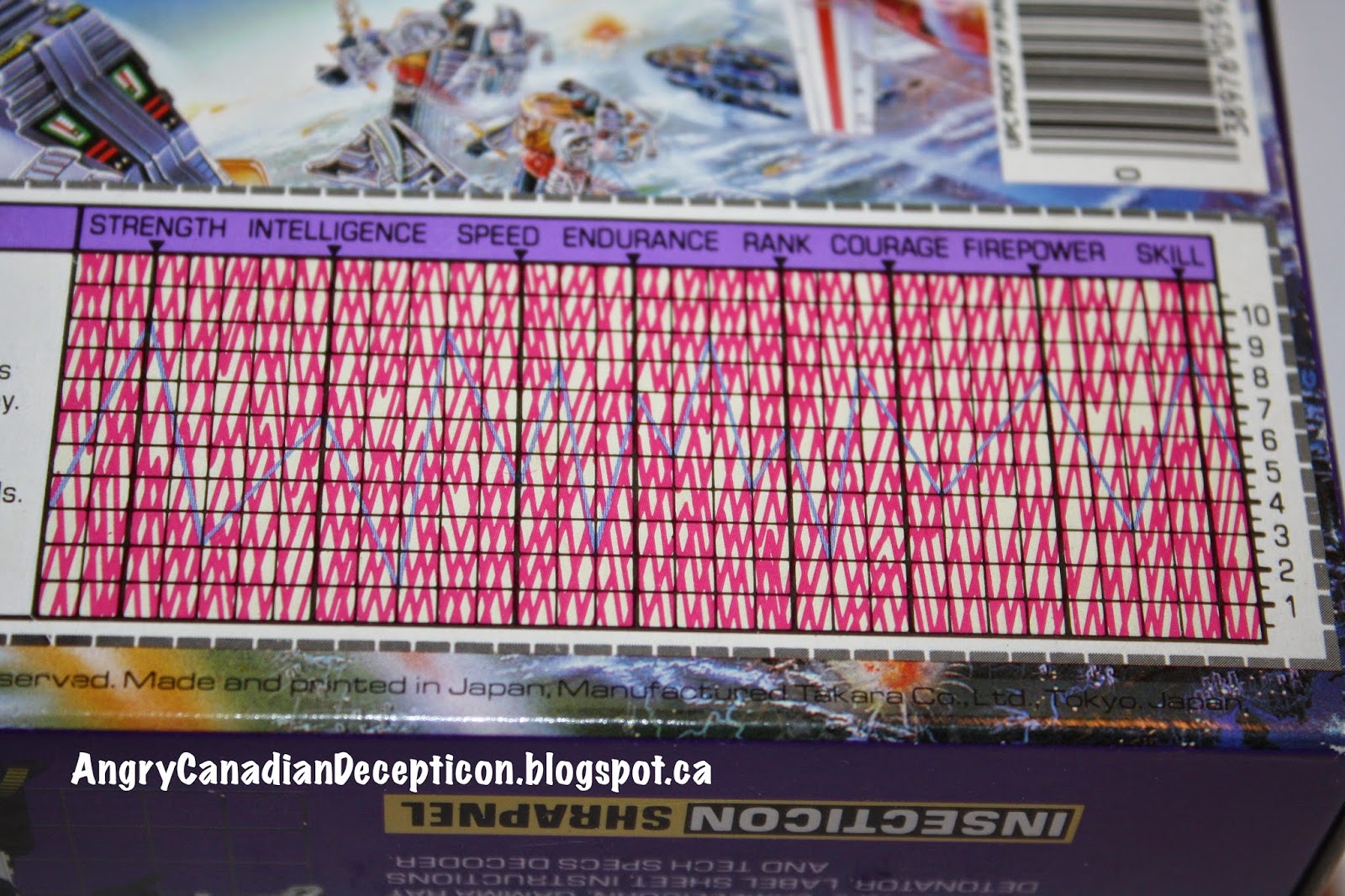 Posted by acdecepticon at 10:53 PM