*sigh* Why do I get so angry sometimes...because this is my second attempt at this post. Thanks for nothing Google blogger.  anyway, lets see if I can remember what I wrote down the first time (this will also teach me not to save before I do something else).

So here I am at Starbuck's (only because they have comfy big chairs to sit in...you think Tim's would have learned something by now).

I picked this beauty set up (along with one for my friend "M") from our dealer friend "E";  the 2013 WST Dinobots Vintage Edition Limited 888 Pieces. I can't get enough of these WST figures for some reason, especially the legit ones (ya, I know you 'tards, they are all essentially KO's, but I'm referring to the better made ones by companies like JustiToys and to a lesser extent individuals like Herotoymaker).  I'll be doing a big post of all my WST's in the near future...I'll need a good chunk of free time on a day off or after the wife goes to sleep to pull them all out and do photos.

Do you see the discrepancy with the profile of this set....last sentence....limited to 800 pieces....so then why on the cover does it say "888 PCS LIMITED" ?

Like I have already mentioned, this is a great set and I think at a fair price of $120.  Will it ever increase in price, probably but to what extent I don't know.  I would guess maybe $150 since there are already two similar box sets outs which have a way lower production run:

My friend "M" has the Comic Edition which I had the opportunity of picking up at the 2012 TFCON at $150 but didn't pull the trigger for some reason.  Very stupid of my since that was a good price and it was already coming from the TFSource display table.  I though for sure I get it this year at the 2013 TFCON but no luck.  TFSource didn't even have any WST's at their table, actually most of the dealers didn't which you can take two ways.  Either it was just a coincidence that most dealers didn't bring them, or people are losing interest in them (which is fine with me since they will be getting rid of them at low ball prices). I could buy this sh@t all day long.

Now, here's the new one both of us just purchased; notice the difference (other than the photo quality...sorry I was using my iPhone at the time) 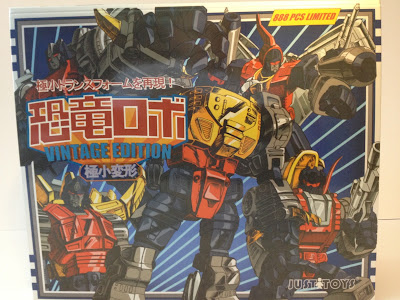 Maybe some pics of the inside will clear some things up:


Here's the inside of the Comic Version as well: 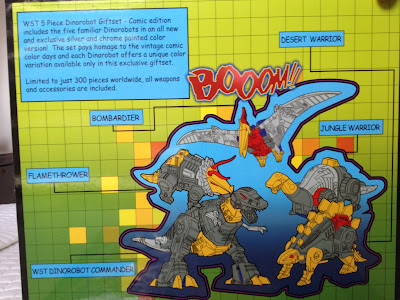 That's it for now.  there are a few more pics I have to add that show a discrepancy I don't understand but I don't have them with me at the moment. They'll be up soon so keep an eye out.