This is the first item I have received in the mail since I started this blog so I thought that I would show the complete unboxing.  Now, I did try to get this item UTR (Under The Radar; this is the term that my friend "M" and I use when tying to intercept parcels before our respective spouses see them).  For those of you lucky enough to enjoy having wives that are into collecting, God bless you because you are lucky.  For those of us that have wives that just tolerate this hobby, the less they see of it the better and so we try to get to delivered packages before our wives get home.....it is what it is.


Anyway, I was at work when I saw on my postal app that this item was out for delivery.  My only chance was to leave work on my break, drive a half hour to get home and hopefully the item would be there already....easy right?  Nope.  Arrived home to nothing by the front door or in the mailbox, so back to work empty handed.  An hour later it arrives at my house but by then it was too late for me to go back.

Now, before I go any further, this is another bone of contention for me.  Our postal service, to put it nicely, is sometimes f#@king useless.  Imagine buying something on eBay and as we all know, some things can be fairly pricey, waiting for it arrive, and you come home from work only to find it sitting in plain site by your front door.  I'm in a nice neighbourhood so I'm not that worried, but still, doesn't matter where you live, anyone can be driving around just looking to find packages left by front doors.

This is another bone of contention for me.  I've had some deliveries from eBay where sellers have shipped things and the only padding being some newspapers.  Sometimes there were only a few pages as well, so much for good packing.  Also, the TF wasn't wrapped either, so you go and buy something expensive only to have dirty newspapers rubbing against it.  It's gotten to the point where I have insisted in having my items either bubble wrapped or popcorn in the box or I won't be giving a positive review.  I hate to threaten because most sellers are really good...it's always the few a-holes out there that try to cheap out because they already have the transaction from you. 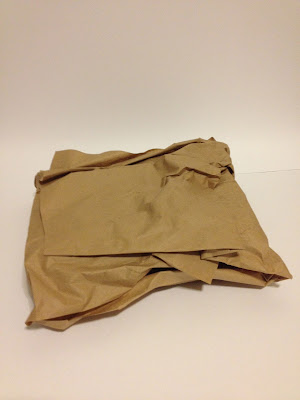 This seller at least did a decent job even though there were newspapers in the box.  He put a ton in there, used a big box, and it wasn't some freezer box that used to have hamburgers or food in it...yes, that has happened before, and the actual TF package was protected from the newspapers by this brown wrap. 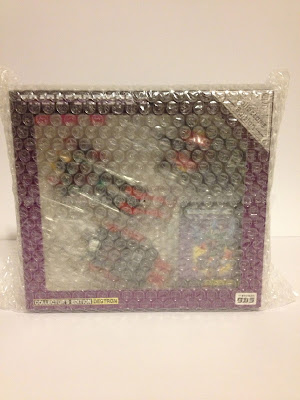 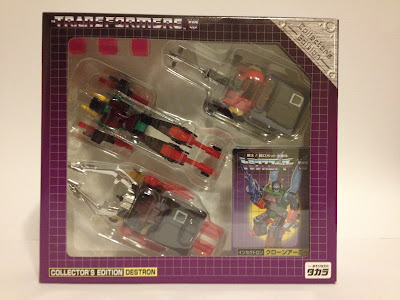 So here we go, the e-hobby Insecticons (MISB).  This was really taken care of.  You can't see it here but the plastic front literally has no marks on it at all which was a nice surprise for me.


The e-hobby company was officially launched in March 2000.  By the time ’01 came around, Takara would have released the first exclusive toy through e-hobby, a black redeco of the original Megatron.
With the launch of Takara’s new “Bookstyle” collection of reissues,  e-hobby would now have the template to start regularly producing exclusive redecos themselves of almost every toy released that was part of the “Bookstyle” line. Many of these were based on old Diaclone or Microchange variants of the toys in question, but were simply given new names and identities, along with new extensive bio profiles.  Meanwhile, in certain cases where there was no existing variants already, e-hobby  would take obscure characters from the cartoon  as inspiration, or even come up with entirely new decos.
As you can see, if I were to pull the plastic display shell out, the three figures, collector cards, and Energon cubes are all displayed very nicely.  With regards to the Energon cubes, this is the first time that factory-produced Energon were included with Transformer toys.

Also, you'll notice that this set of collector cards does not have the Takara designation number on the front of the card.  If you were to flip them over you would find it on the top left on the back. 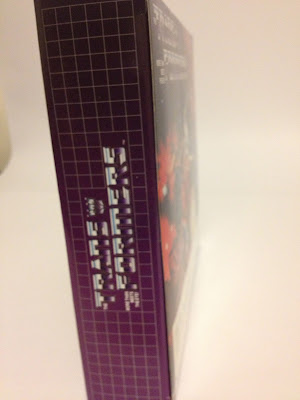 I tried to show the tape on both sides here.  Sorry guys, I definitely won't be opening up this set but I will try to find some pics of everything inside to add this this article as soon as I can. 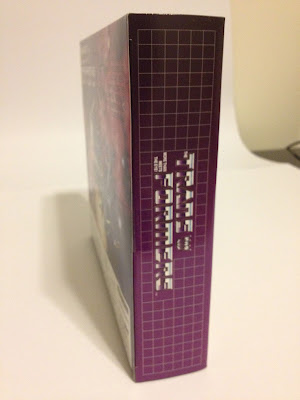 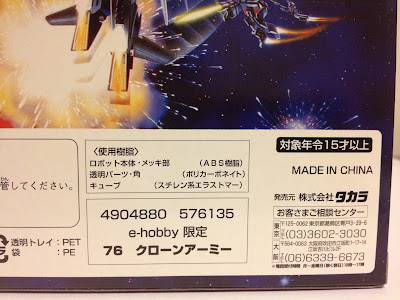 This is all I can do on this set for the moment, but I'll post some more when I can, as soon as I can find some more pics of this item opened......sorry, I wish I could bring myself to open it guys.

Posted by acdecepticon at 9:00 AM