Here is another pickup that I nabbed from the 2013 TFCON.

the hallway to actually get into the convention hall.  I forget the guys name (apparently we bought some stuff from him at one of the other conventions) but he had a bunch of old G2 and G1 items.  Unfortunately, I'm such a stickler for the condition of the figures I buy that I tend to miss out on some really great things because of some creases or such.  This dealer did have a G2 Sideswipe but again, due to the condition I have, couldn't pick it up due to some unfortunate bubble damage.  Anyway, this piece rocks just by itself!

I don't intentionally go out of the way to grab any pieces that come from foreign countries, but if they're in nice enough condition it certainly won't stop me.

Really? Considering Slag's favourite thing is to run through buildings, you wouldn't think some palstic could contain him.

Slag originally went through several changes in the G2 line.

No, not really. It actually says, "With parts in cyber metal !"  Sometimes they advertise the obvious....or in this case, did we really need to know this?  I think I would have preferred some more creative box art or something along that line.

I've always wondered what the executives were thinking when they were sitting around the table deciding on what colour to choose for the G2 Transformers...."Hey guys, you know what color would really pop?   Salmon !" I'm not saying that I don't like it, because it definitely adds to making this line distinctive.

The weapons are identical.  I was never a big fan of Slag's red sword as I prefer chromed weapons throughout.


Love this card artwork! The only way it could have been better is if they had done a full card aize pic.

" I try to give the best in every battle, because it is exactly what the Dinorobots expect from me!"

Tricex is strong, powerful and extremely attentive, enter without fear into enemy territory, and will never fail to complete a mission; and in the form of Dinorobot, knows how to use his great strength to break any barrier and reach the goal. 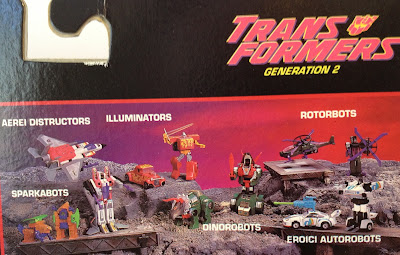 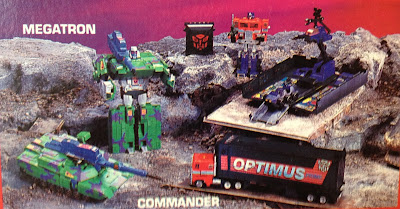 
Anyway, I'll have to see if I can find a loose G2 slag later for some figure shots because I sure as hell ain't opening this one up, but if you have a G1 Slag there really sin't much difference.

Hope you enjoyed this guys!

- angry canadian decepticon -
Posted by acdecepticon at 9:01 AM