Call Me Ruination or Baldigus…Just Don't Call Me Late To The Fight!

This is all started with a name…..Ruination. Hook, line and sinker. They had me.  Okay, so it is basically Bruticus but that doesn't matter to me.  Anything with a name like that I had to have!  Before you think that's a weird way to buy something, take some time to consider how we as a society have been conditioned to buy products based on looks, names, or colours alone and then it starts to make some sense.

Just a completely sexy looking box! It has everything that I love the most when looking at packages:

This was actually the first piece that I ever purchased directly from Japan; the sellers name
on eBay was either Zero-F or F-Zero. Whatever the case may be, I was hesitant because of the distance but this was such a nice piece that I decided to risk it.  In the end, they were an excellent seller, package arrived super safe and quickly considering how far it came form, and I would buy from them again without hesitation.

The main retooling to Baldigus involves him now being able to assemble two hand-held super-weapons using all of the weapons and accessories from all of the component robots. He also has a full back now owing to the ability to store his ramp on his cannon-backpack thanks to a new 5mm post-hole in the cannon-base and new 5mm post on the ramp underside. It's spiffy. This same functionality also lets him use the ramp as a (somewhat awkwardly) hand-held shield.

This figure was available individually or as part of the Baldigus giftset in Japan, in 2000. 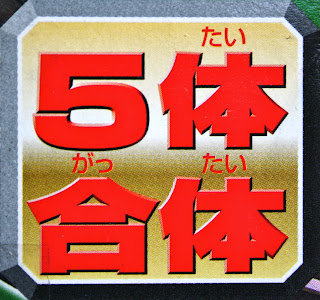 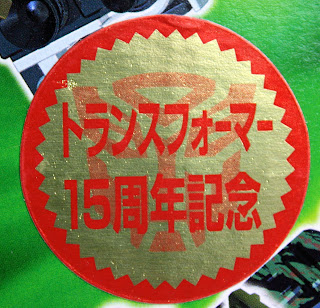 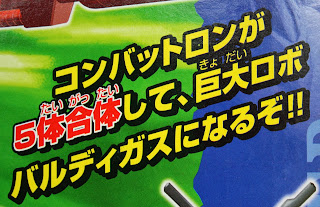 Some closeups of the great artwork.

Ruination is the combined form of the Commandos, the Decepticons' military squad.

While the minds and bodies of all five Commandos come together to make him, Armorhide, Movor, Rollbar and Ro-Tor cede all control to their leader Mega-Octane to make Ruination a more coordinated, intelligent and deadly warrior, whose only interest is in fighting. 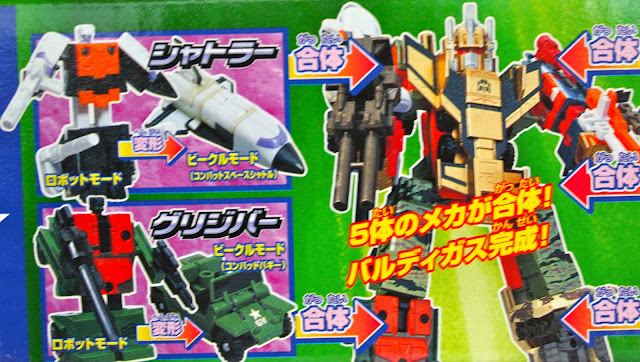 Baldigus is a redeco and slight retooling of the Combaticon molds from Generation 1. As the original mold set is a "Scramble City" style of combiner, team leader Dolrailer (Mega-Octane) forms the super robot torso, while the four other robots —Dangar (Armorhide), Greejeeber (Rollbar), Hepter (Ro-Tor) and Shuttler (Movor)— can form any limb. There is, of course, a "default" configuration, or in this instance, two. 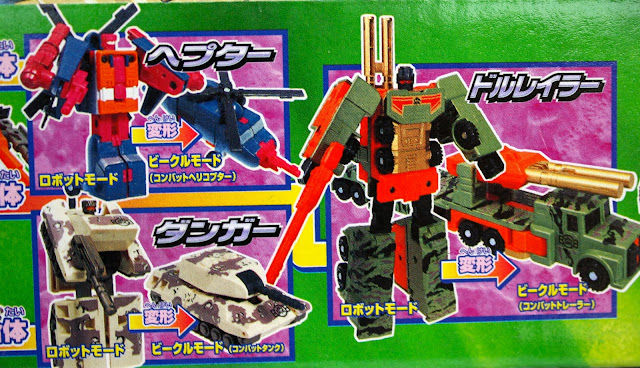 Making things worse for his opponents is his ability to swap his limbs around to adapt to whatever combat situation he finds himself in. "Flight Mission" mode puts Ro-Tor and Movor in the arm sockets, giving Ruination limited flying ability. "Land Mission" mode has Armorhide and Rollbar in arm mode, giving him increased power on the ground. 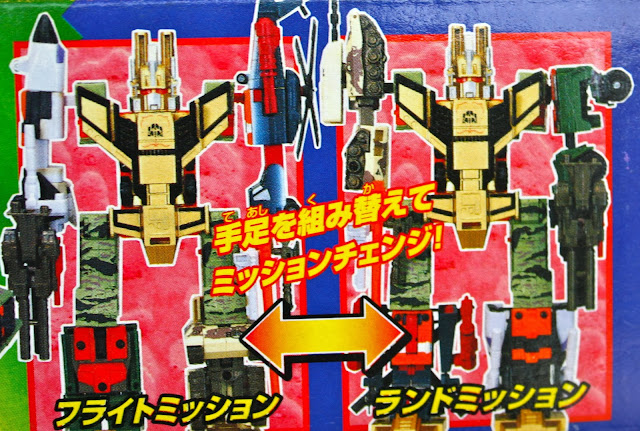 Most typically, he is depicted in his Flight Mission form, though he doesn't do a lot of flying.

The five Baldigus components were available both as individual releases, or in a five-robot multi-pack. However, the multi-pack version came only with the bio card for the combined form, available nowhere else, and had none of the individual cards. This version of the team has mustardy-golden combiner kibble and a desert-deco tank component "Dangar".

From here down I have included the three other versions that I have so that you can get a really good feel for all of the different colour variations. 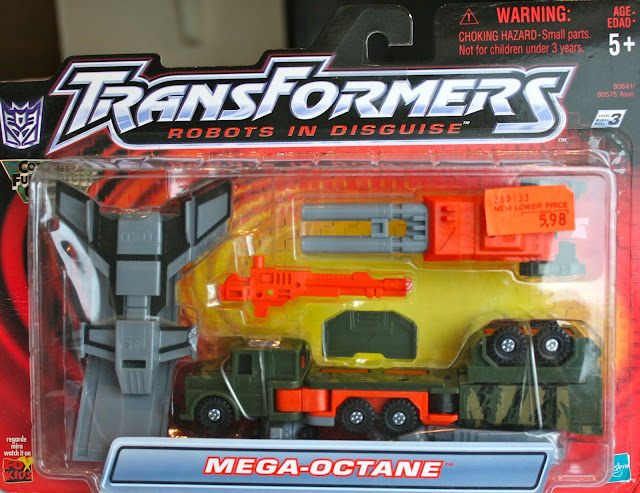 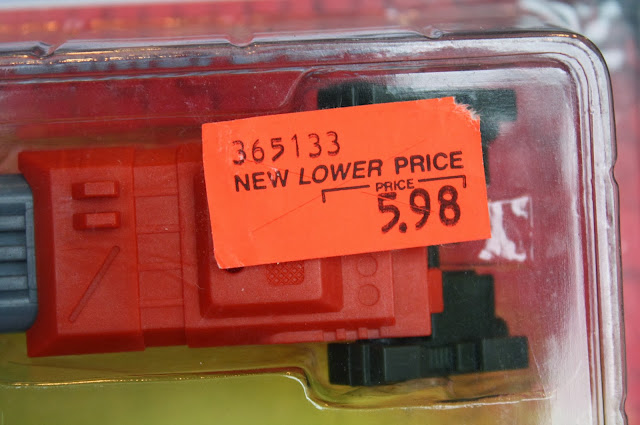 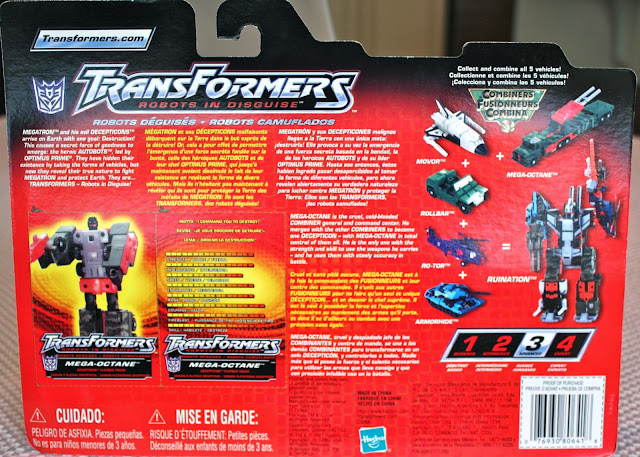 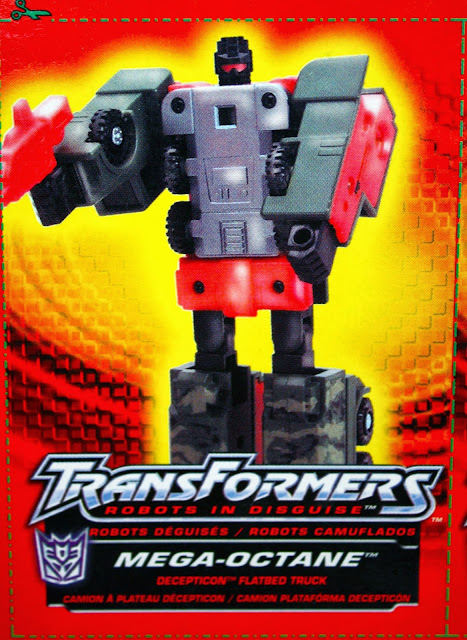 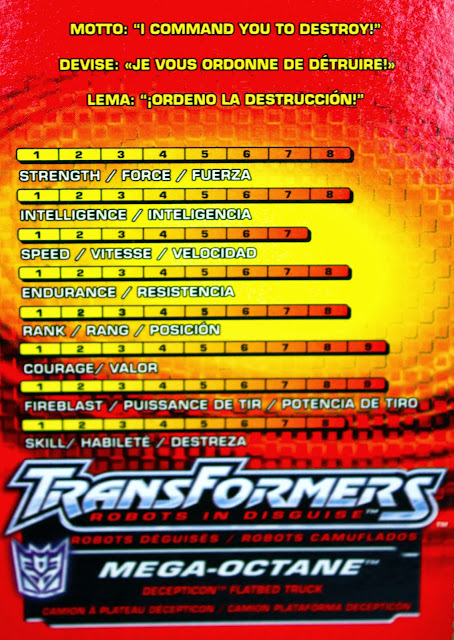 It's a shame the Mega-Octane was the only figure to come with Tech Specs on the back of his card.  It's little things like this that I find disappointing as a buyer. 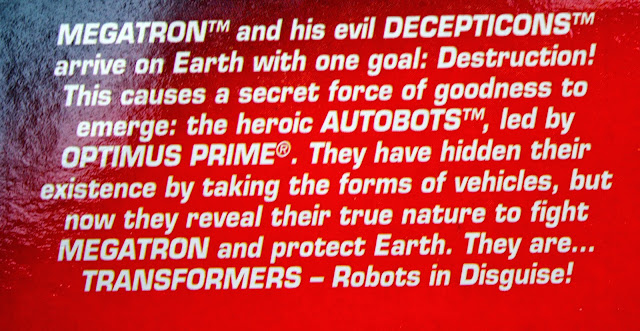 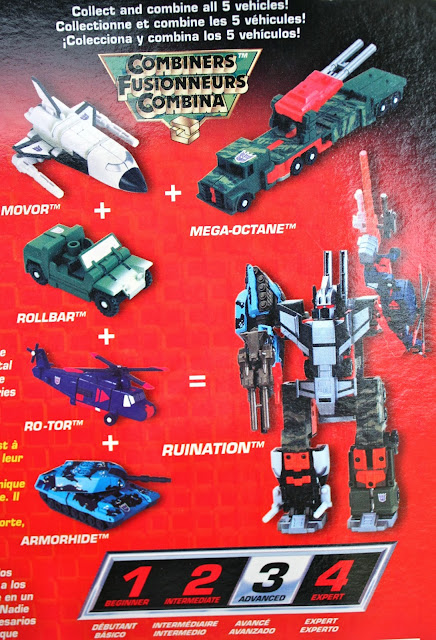 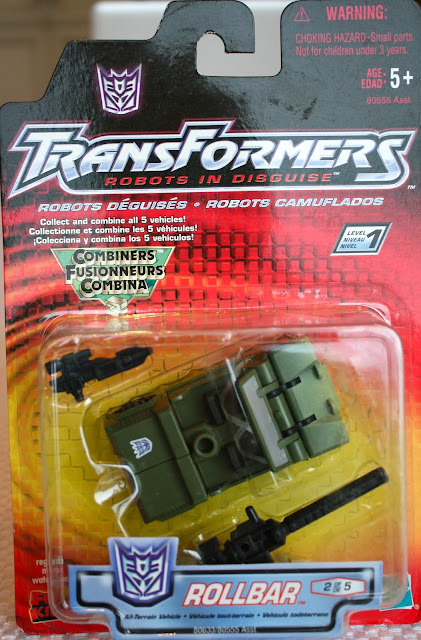 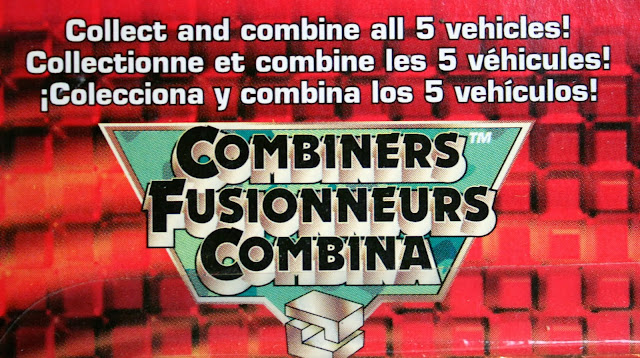 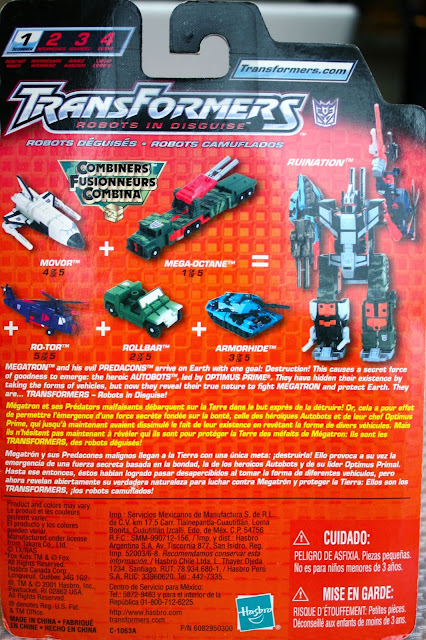 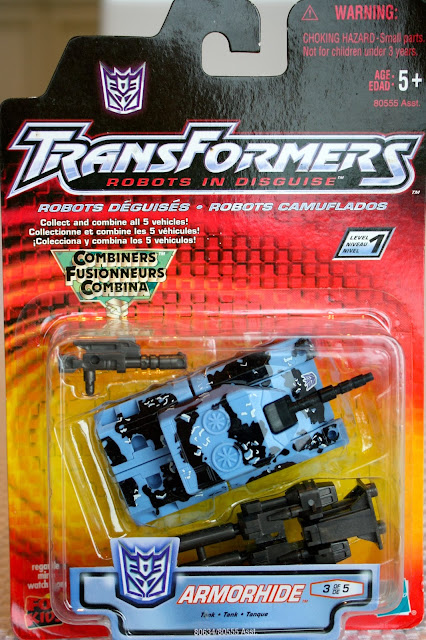 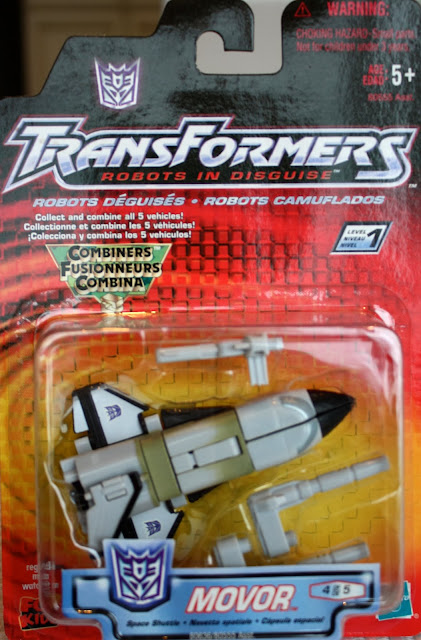 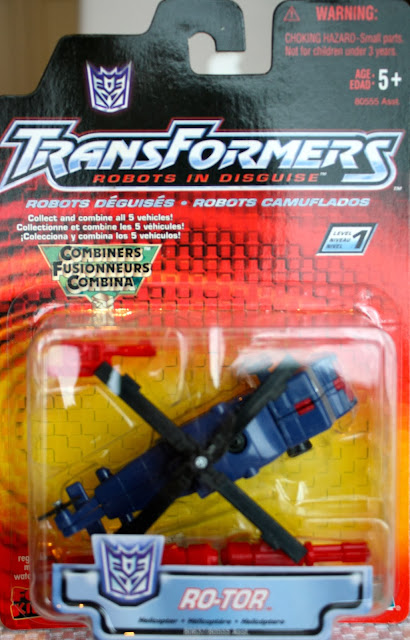 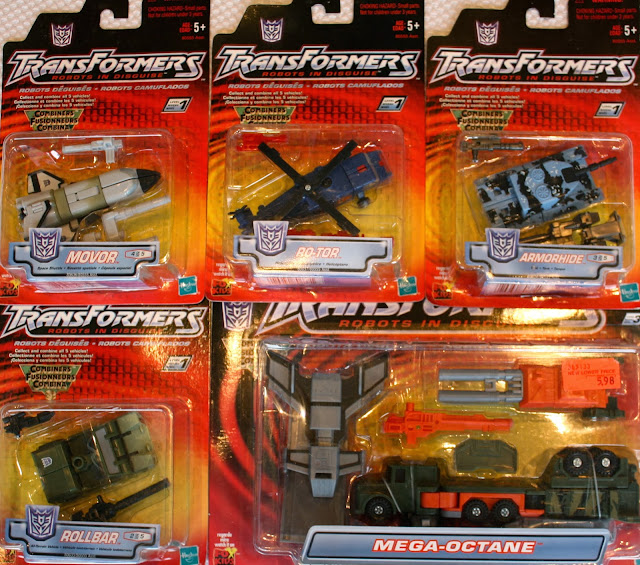 This set below was available exclusively at WalMart stores as part of a Ruination giftset in 2003. 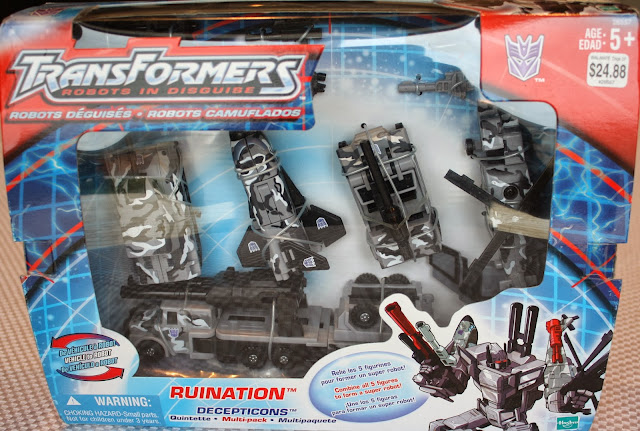 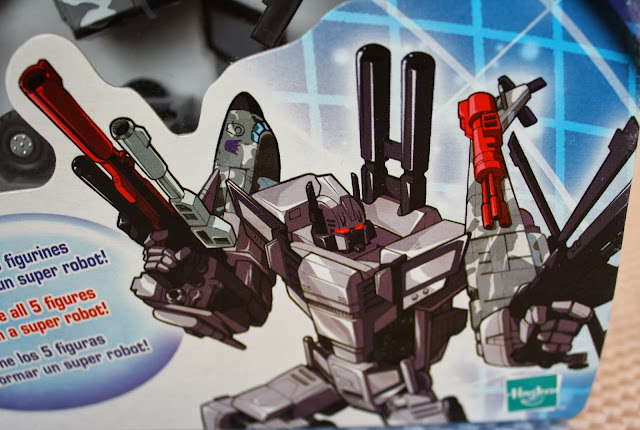 The artwork is slightly lacking when compared to the Baldigus'. 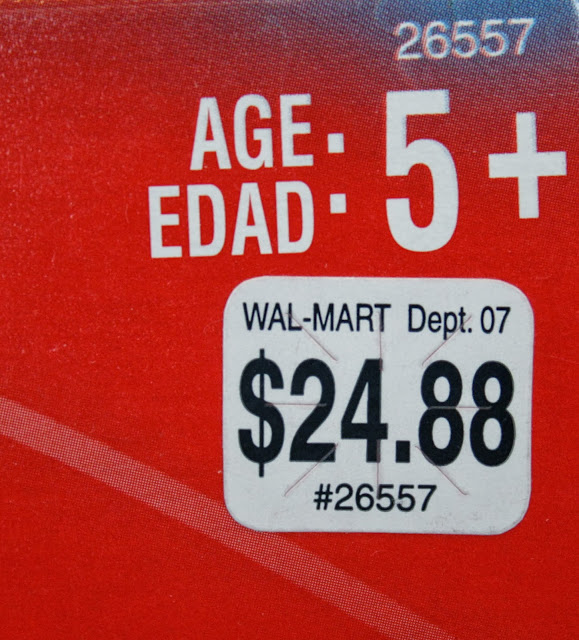 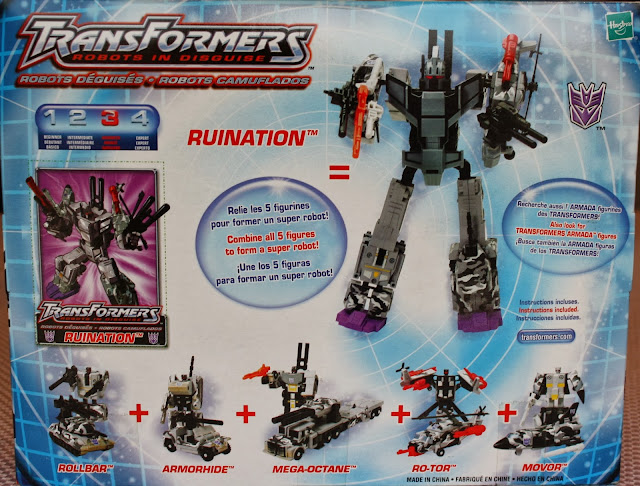 This set below was also available exclusively at WalMart stores as part of a Transformers: Universe Ruination giftset in 2004. 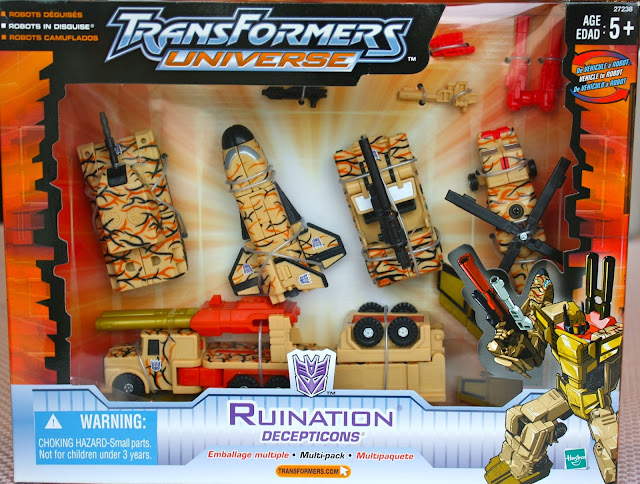 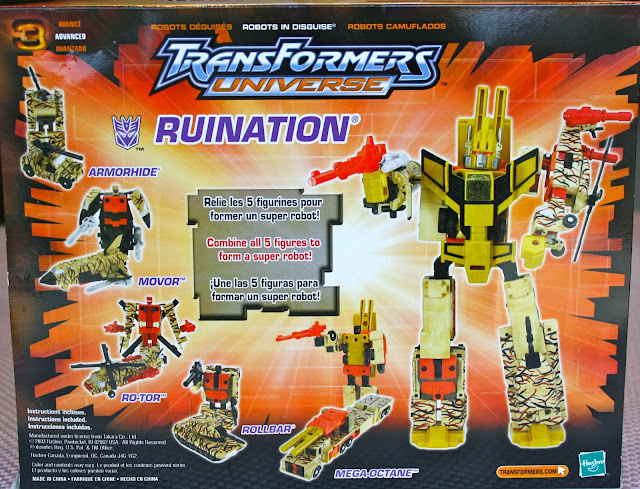 Only 1 more set to go.  I'm still looking for the Baldigus carded set.  I've seen the same one on eBay for the past while but it had been opened and slightly overpriced in my opinion.

At the SDCC 2012, Hasbro released official images of their Wreckers Ruination figure.  You can get some info of it here, or if you would like to buy it, TF Source has it for sale here.  It's…..not for me.  You see, I like this old style of blocky figure instead of the spindly, spidery appearance that this new Ruination has.  It's not horrible, but like I said, it's not for me.

It's hard for me to recommend just one of these sets.  I would get the Baldigus set from Japan just for the box art alone.  In the end, it just really comes down to what colour variation does it for you. Or, you could do what I did, get them all, and then depending on what situation you're going to use them in you can bust out the appropriate colour scheme…..and then rain down Ruination on some Autobots and humans!

Posted by acdecepticon at 5:59 PM