So another TFCon show has come and gone.  After having a few days to think back on it, I am going to admit that this show was better than last years.  Even though I only came away with one item, there were certainly plenty of opportunities whereby I could have dropped some coin and picked up items that would have filled holes in my collection.....but that's just it.  They certainly weren't pieces that are hard to find, or at the top of my serch index.


This was the one item that I bought from one of my dealer friends.  To be honest I'm not the biggest fan of Huffer, but this card just caught my eye for a few reasons.
My initial reaction for this purchase was the dark orange coloring of Huffer.  It just a great color.  Secondly, it was for him being on the wrong card..  I like funky little things like that. 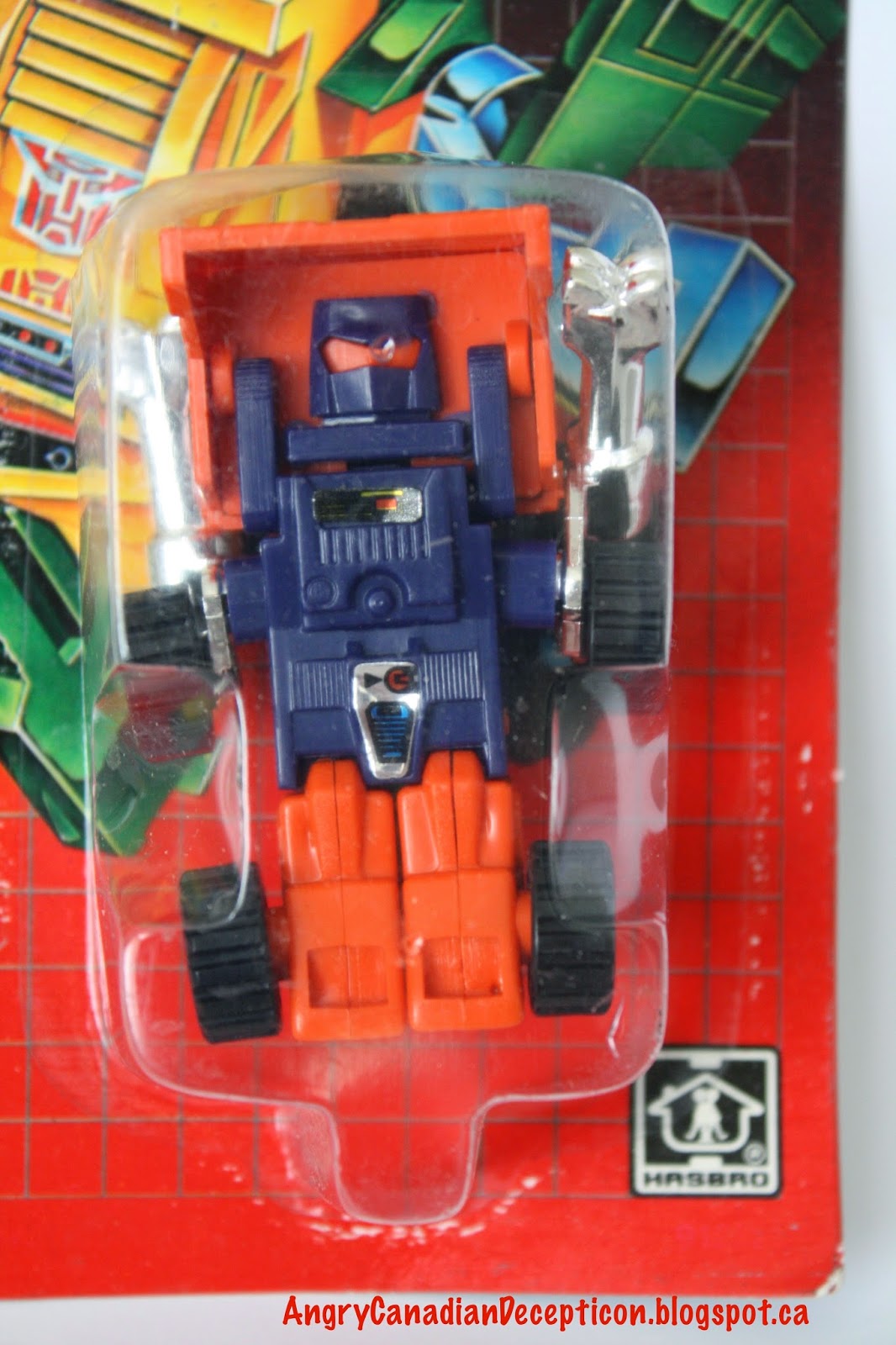 Huffer was part of the original 1984 assortment of Autobot Mini Vehicles. His mold was originally used for the Micro Change series of toys as an "American" truck. The Micro Change toyline was meant to depict robots that transformed into toy cars, which accounts for the somewhat cartoonish proportions of Huffer's vehicle mode. In 1985, Huffer's rooftop faction symbol decal was replaced by a rubsign.This mold was used to make Pipes; for the Hasbro line it was extensively retooled, while in Mexico and some European markets, it was straight-redecoed.


Thanks to "2punish&enslave" & Maz from tfw2005.com
THE DIFFERENT VARIATIONS OF HUFFER :

Takara Microchange. Large "coffin box". 1st release.
Takara Microchange. Small box. 2nd release.
Hasbro pre-rub.
Hasbro rubsign
Hasbro rubsign with minispy
Hasbro Canada 1984 & 1985. Some have robot points on front of the package (more rare) and some have them on the back.
Hasbro red decoy (rubber)
Takara (#14)
Takara reissue from the Takara Collection minibot set. No stamp. Stickers and grill slightly different.
Joustra (French) Diaclone "Truck".
Milton Bradley (Europe).
El Greco (Greek) dark orange
Lynsa (Peru) peach + yellow
Lynsa (Peru) blue + yellow Have a loose one. Would be interested in a packaged one.
Lynsa (Peru) red + yellow. Have a packaged one. Would be interested in a loose one.
Ceji light blue + white aka Puffer released in Europe. Have a loose one. Would be interested in a packaged one.
IGA (Mexico) dark blue + white aka Puffer. Have a loose one. Would be interested in a packaged one.
IGA (Mexico)dark blue (no white) I've talked to Maz about this one and he says there may only be one of these.
IGA (Mexico) orange + blue standard colors
Rubiplas (Venezuala) red + yellow. May also be a variant in standard colors but I haven't seen one.
Kabaya kits (Following information is from Ras "in addition to the Transformers Kabaya kit (of varying colours, including a chrome gumball prize) there is a larger kit that was part of the microchange line available in two colours. Black/red + red/black I believe." I only have a knockoff yellow Choco kit.
Dairycon black & white cow color pattern Huffer renamed "Heffer".
Dairycon exclusive Huffer with Optimus Prime colors and head. Comes with Pretender that looks like Peter Cullen. Only 8-10 exist according to the only seller that I've seen.
eHobby black + red Roadranger
Dairycon 2013 Nemesis Huffer. Black & purple with Decepticon logo.

Joustra Diaclone "Truck" - 2 versions of this, TAKARA JAPAN vs multi-line Takara/dates copyright. Unfortunately they may be indistinguishable even when carded.
EARLY pre rub stamped "TAKARA JAPAN" only
Canadian Huffers 1984 and 1985 variants (packaged in vehiucle mode with robot points on card front vs packaged in robot mode with robot points on back)
Orange and sparkly blue Mexican variant "Huffer" (normal colours basically)
Rubiplas Venezuelan release Huffer, should be a red/yellow variant and maybe one other, maybe standard colours

﻿﻿ Greek Exclusive Transformers: Licensed by the company EL GRECO, known to toy collectors for unique versions of my little pony and licenced by HASBRO. There don't seem to be too many Greek made Transformers as the EL GRECO company had a life which ended at the early 80s (circa 1985). This is one of the only series of Greek Transformers found so far, which cosists of 7 different CLASSIC HEROIC (mini vehicles is not mentioned). 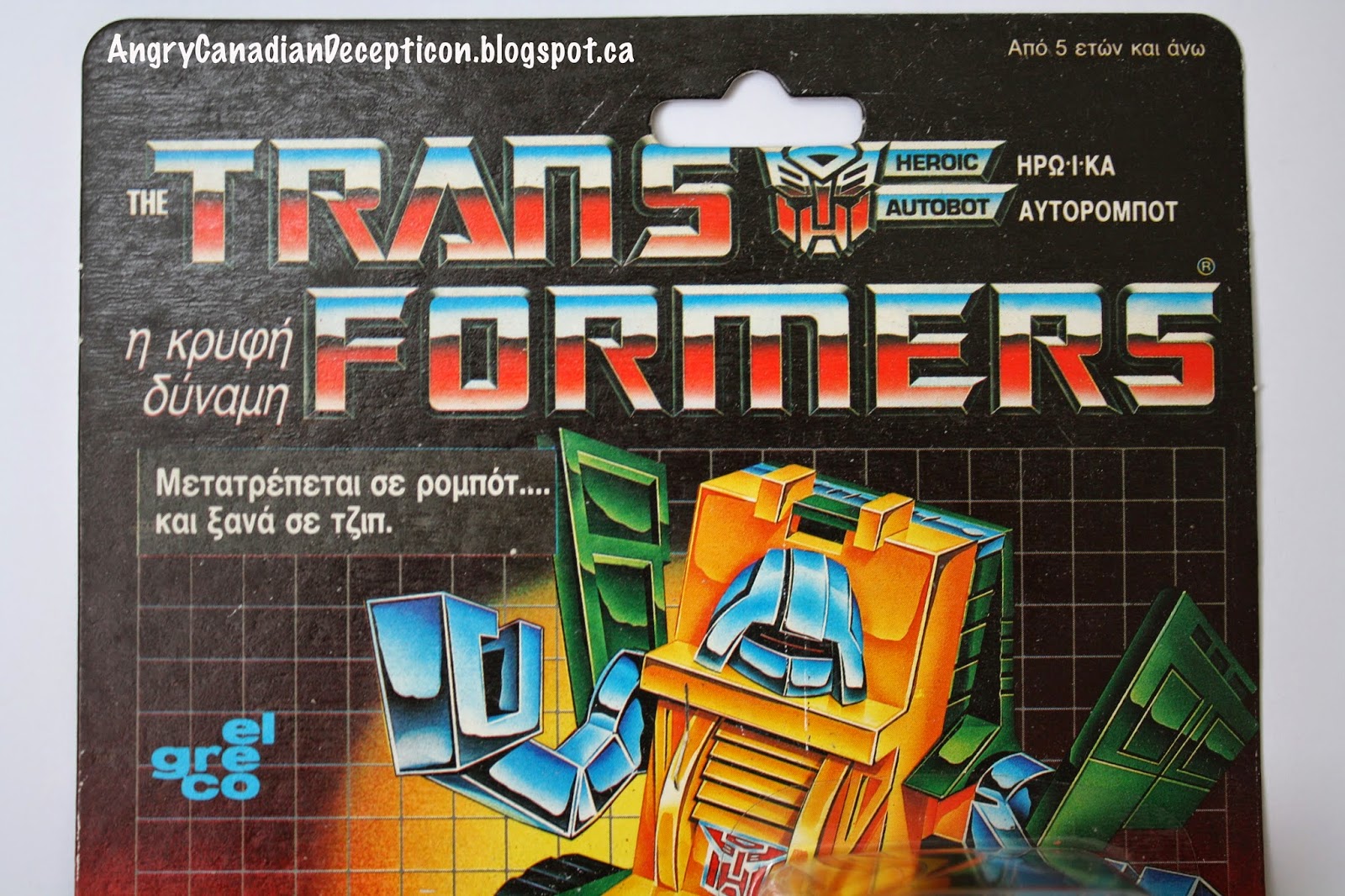 According to Maz, "Joustra Huffer is probably one of the 2 hardest carded Joustra minibot to get along with Brawn. Having said that, there have been a few about recently and eventually people sell them, but definitely far fewer than Gears and Windcharger which seem to be everywhere." 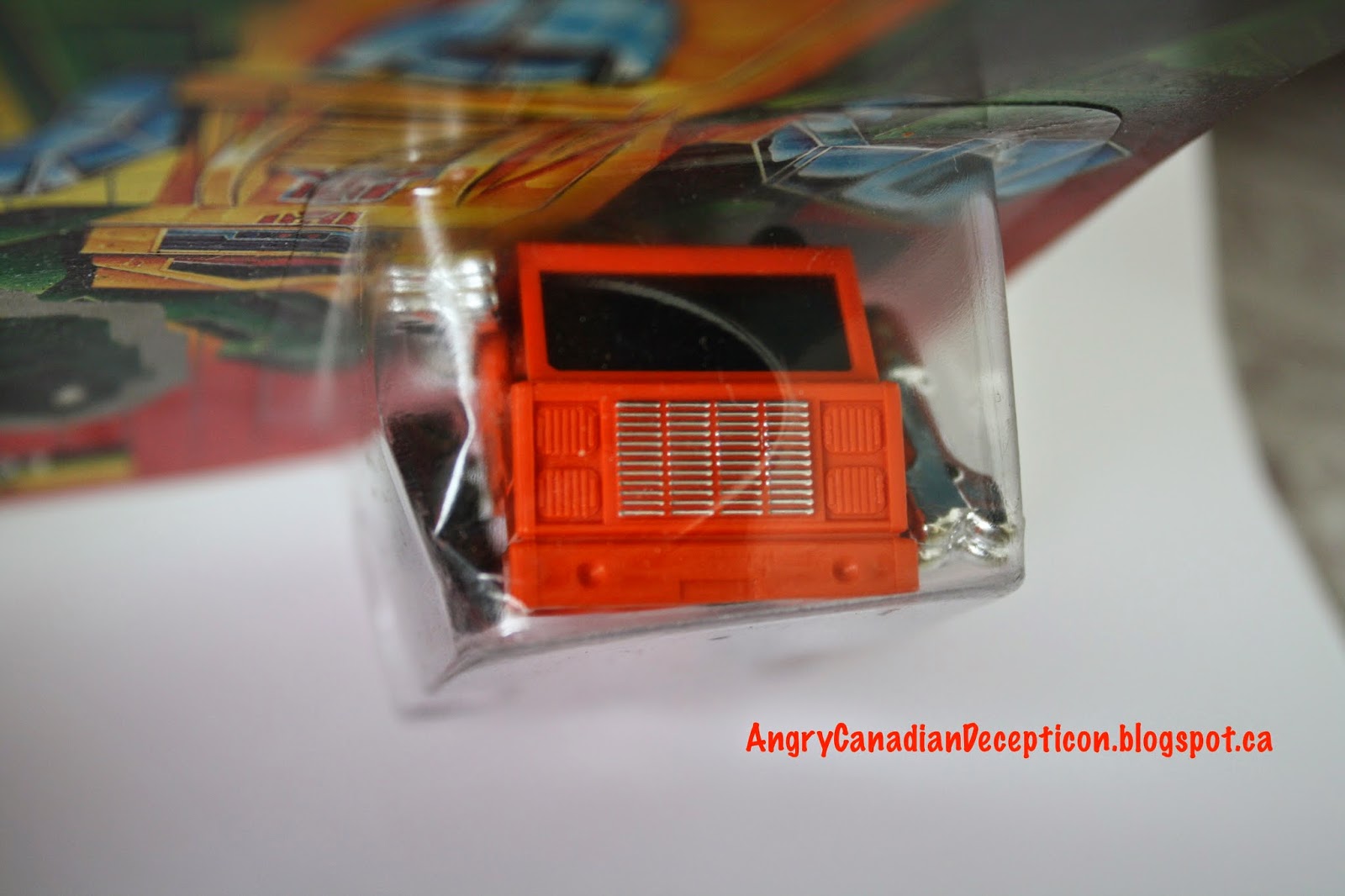 ﻿ Getting a minibot as a variant target is a painful and long procedure, quite often more expensive than you would imagine too. 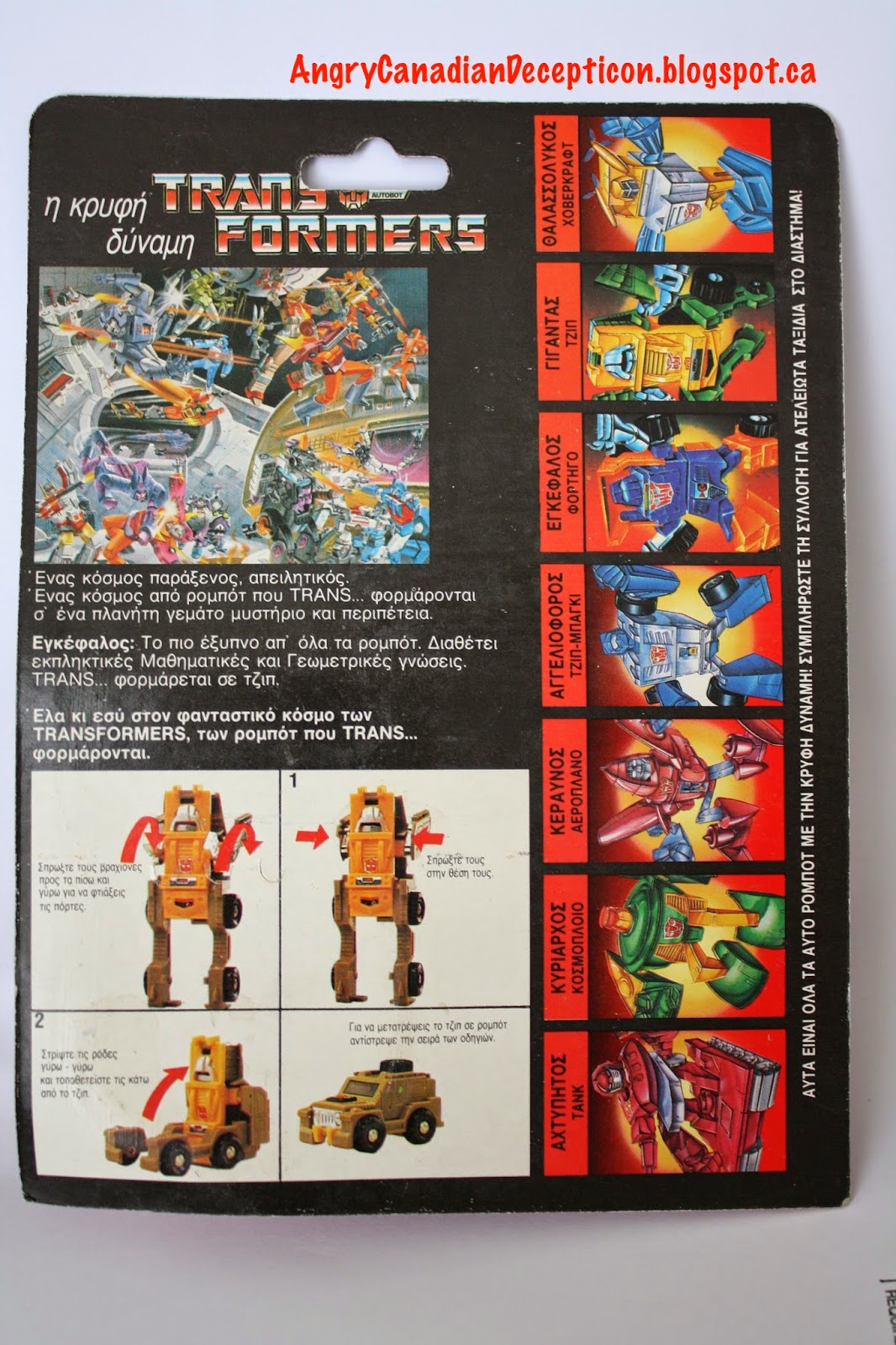 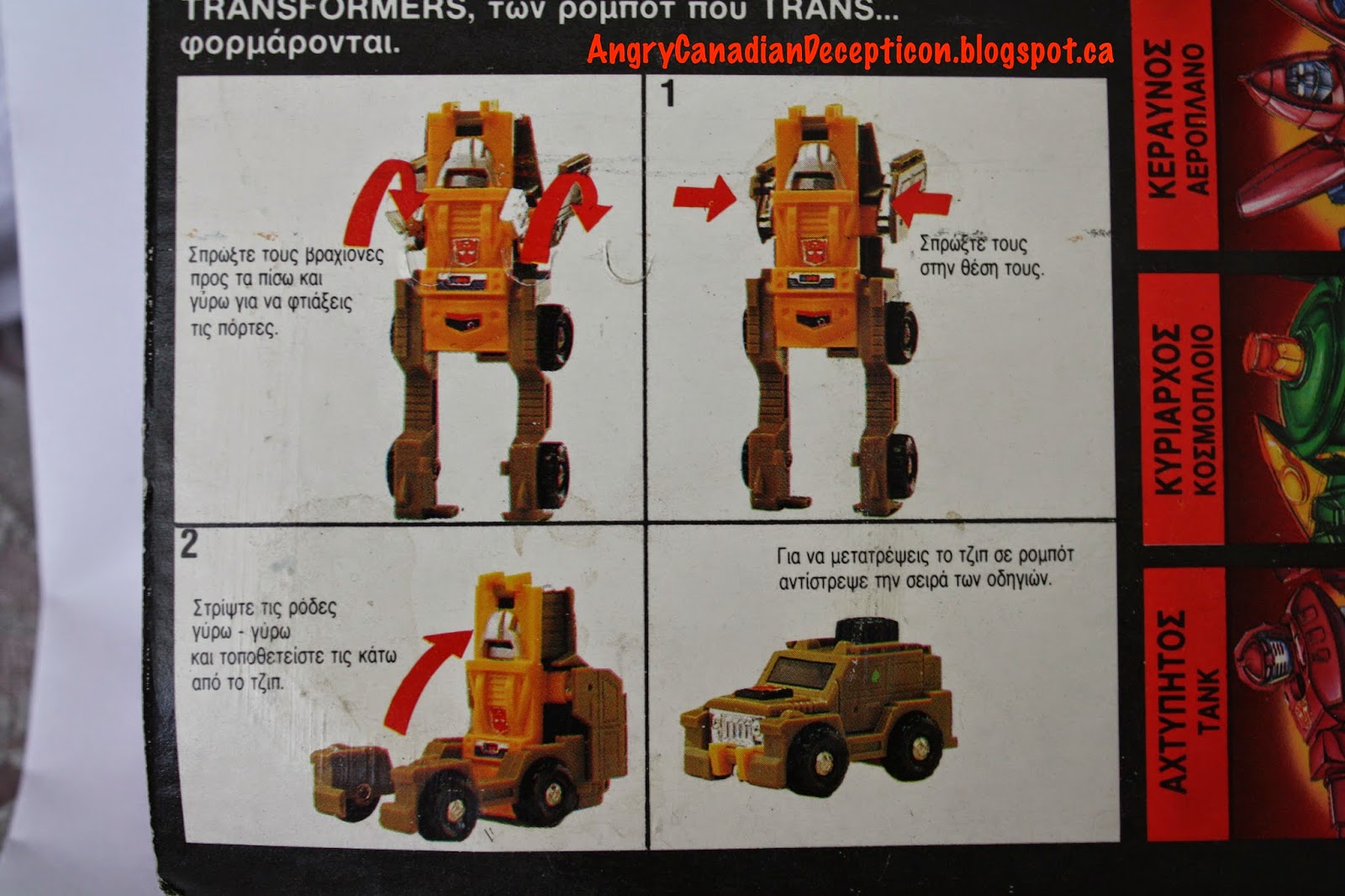 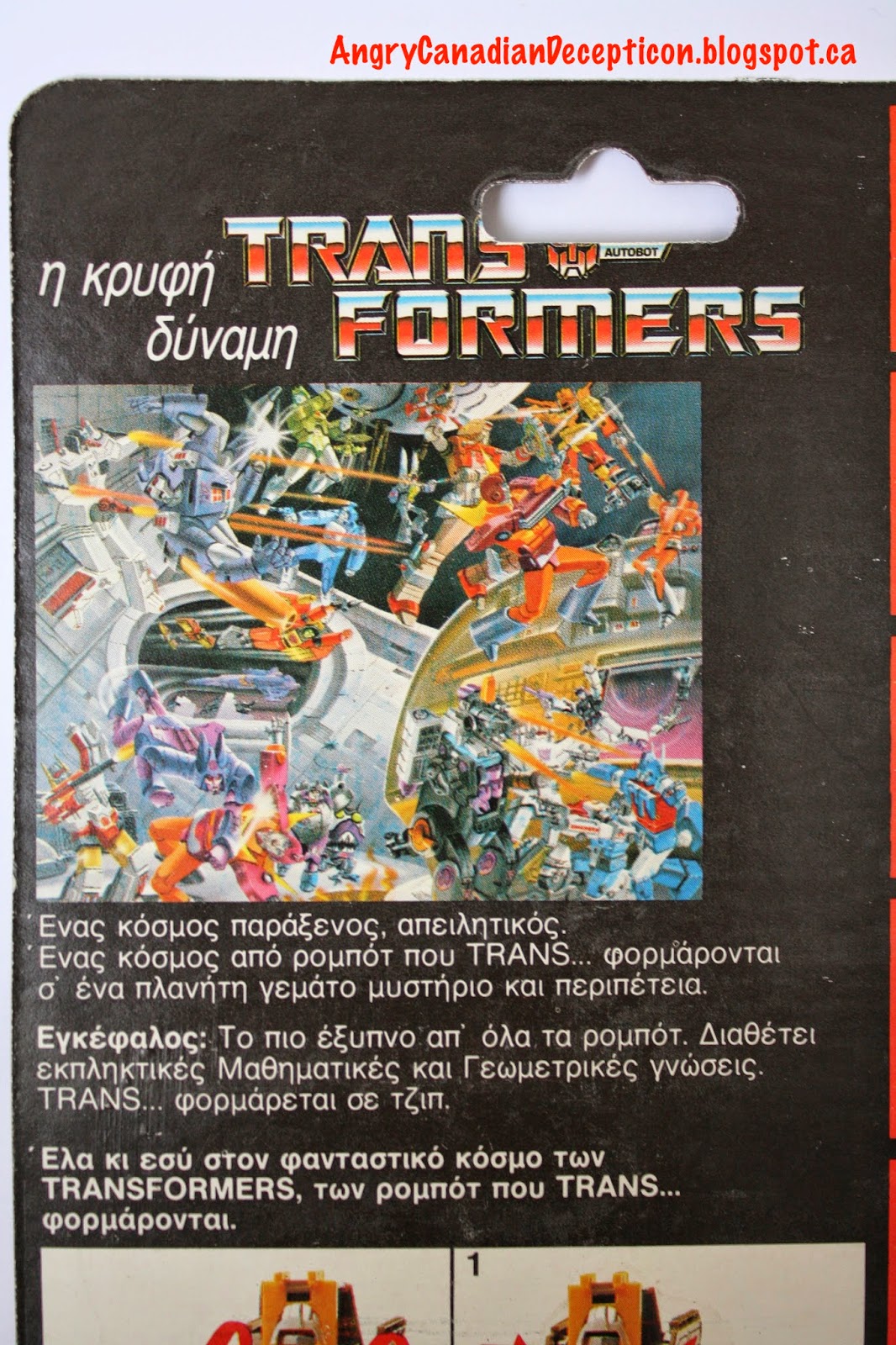 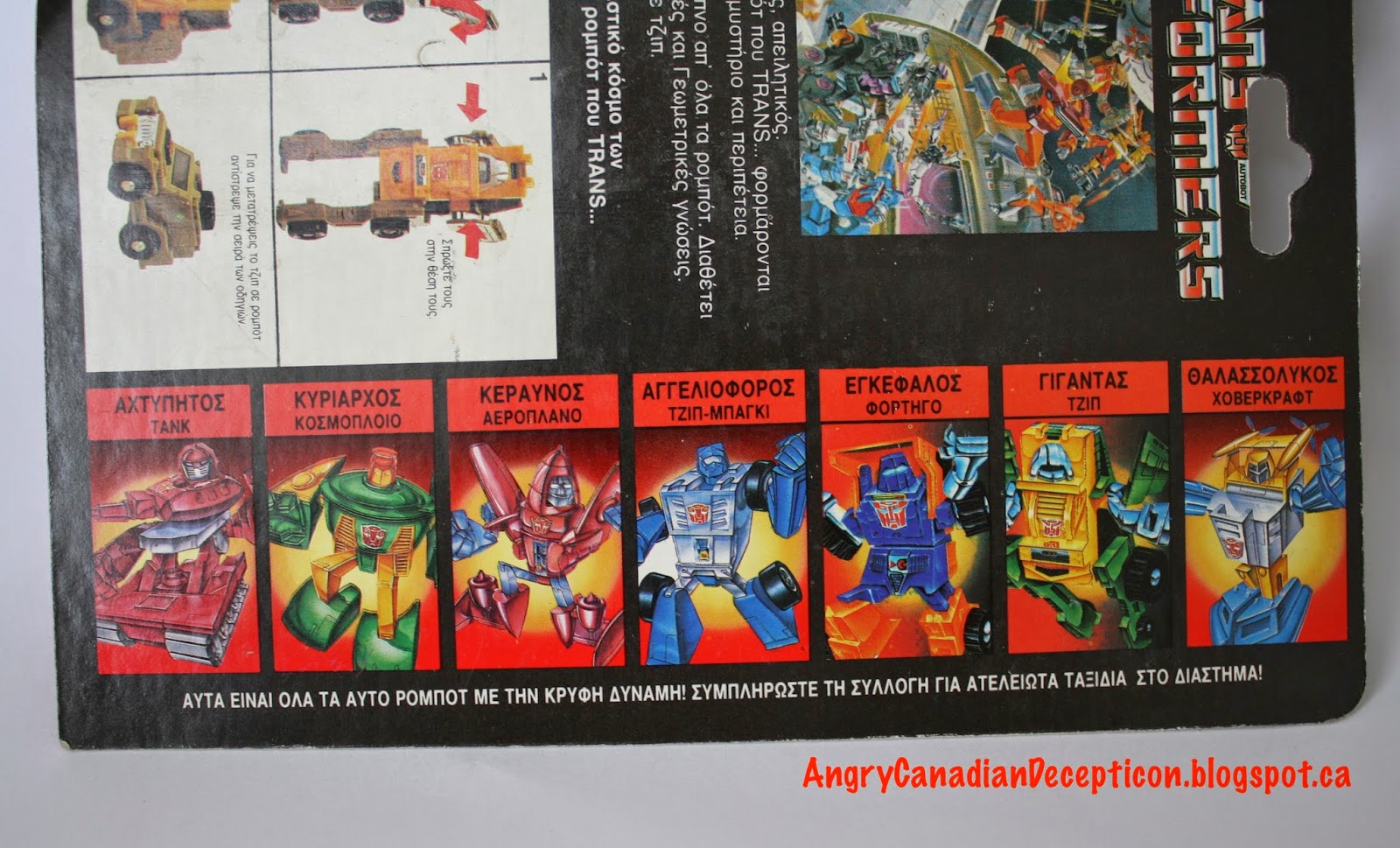 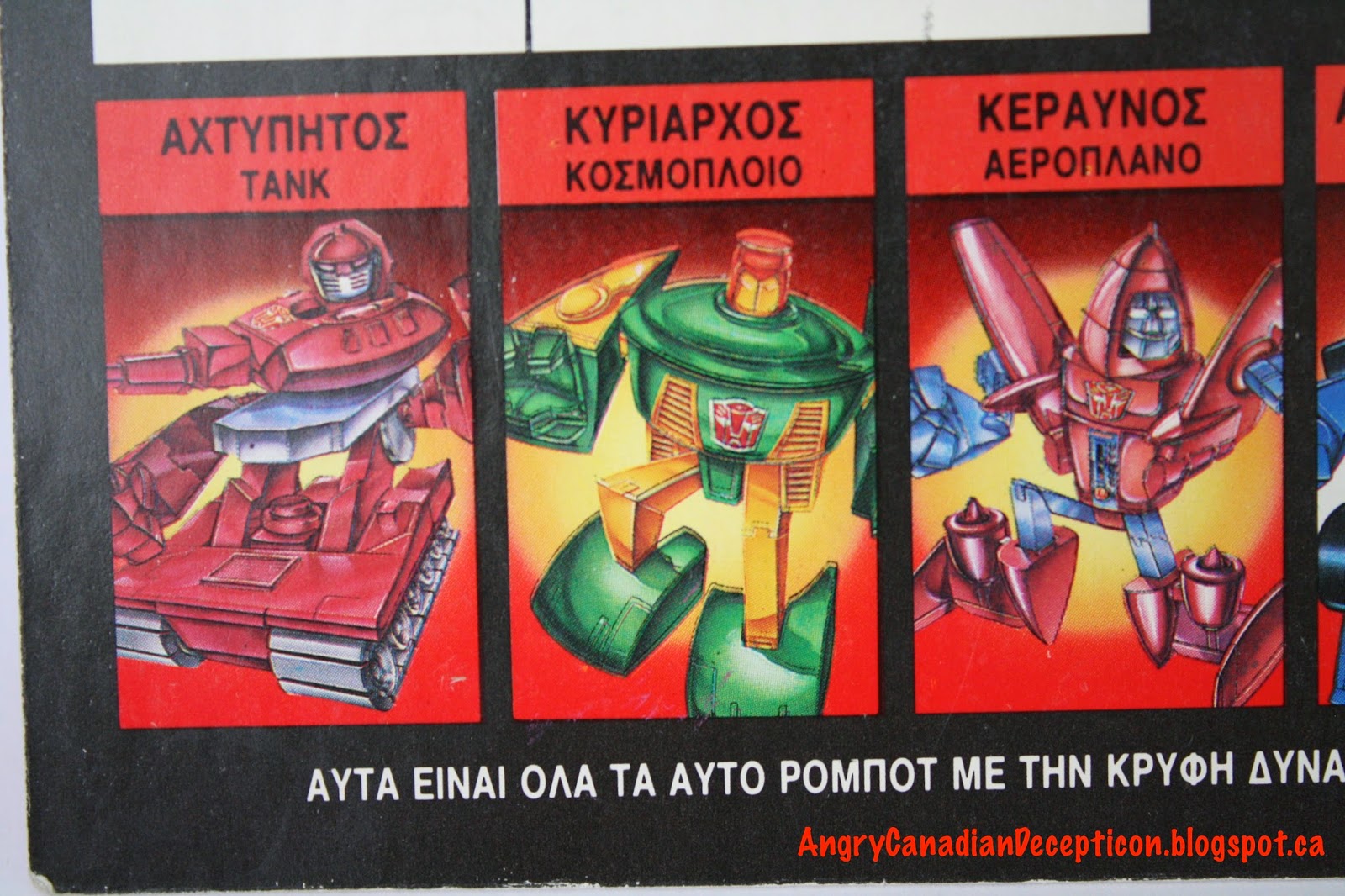 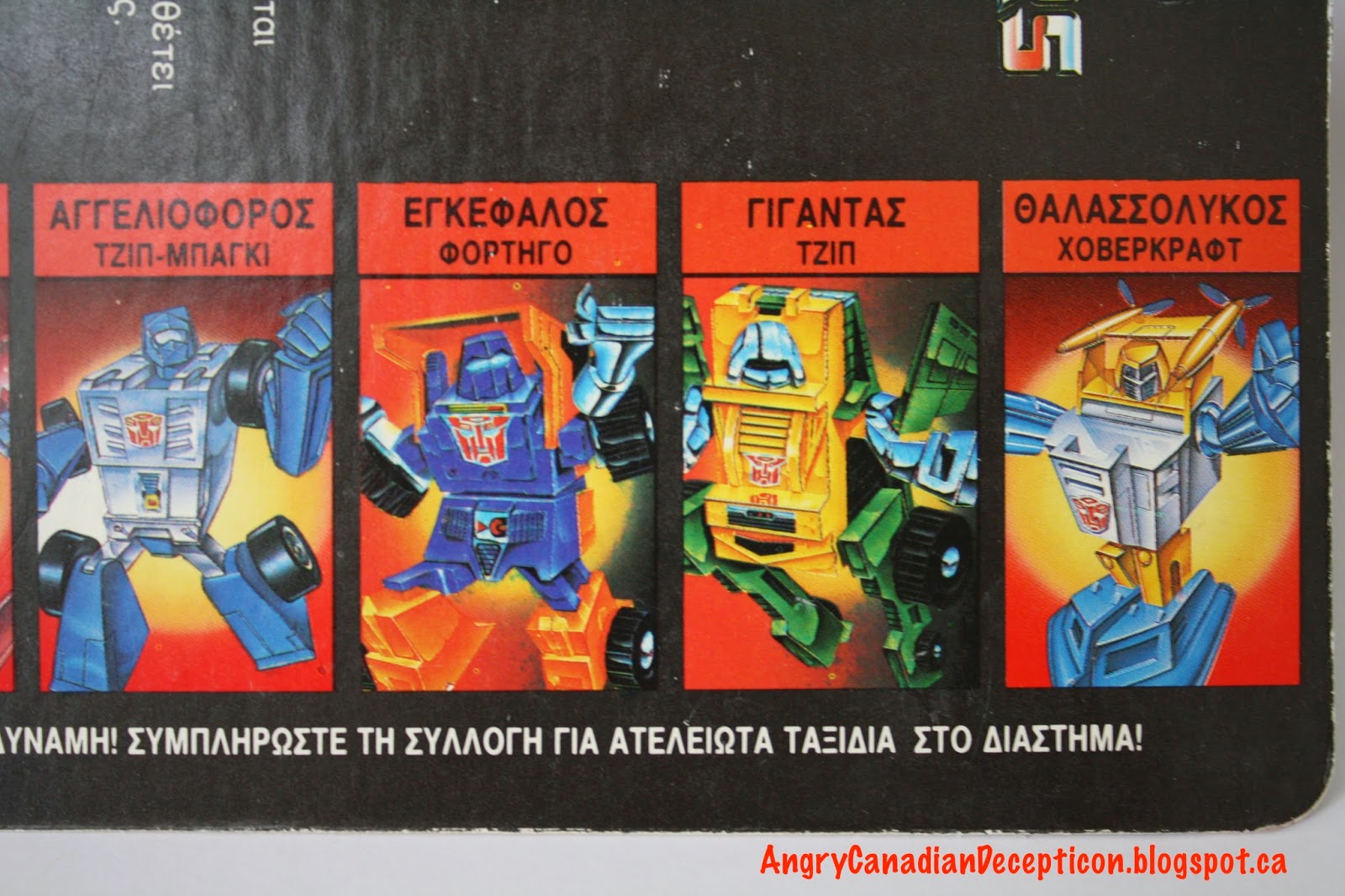 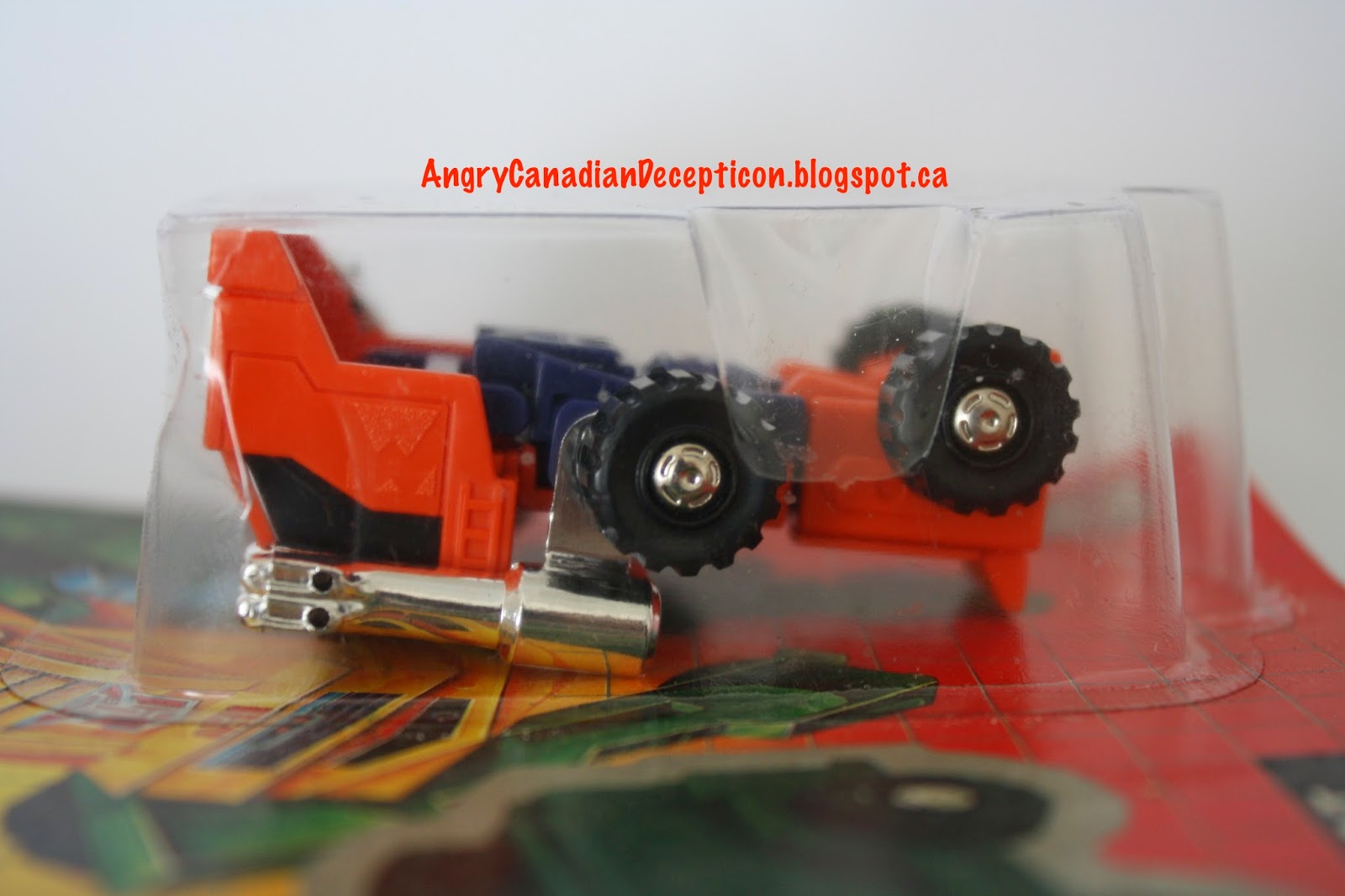 Chrome still looks to be holding. 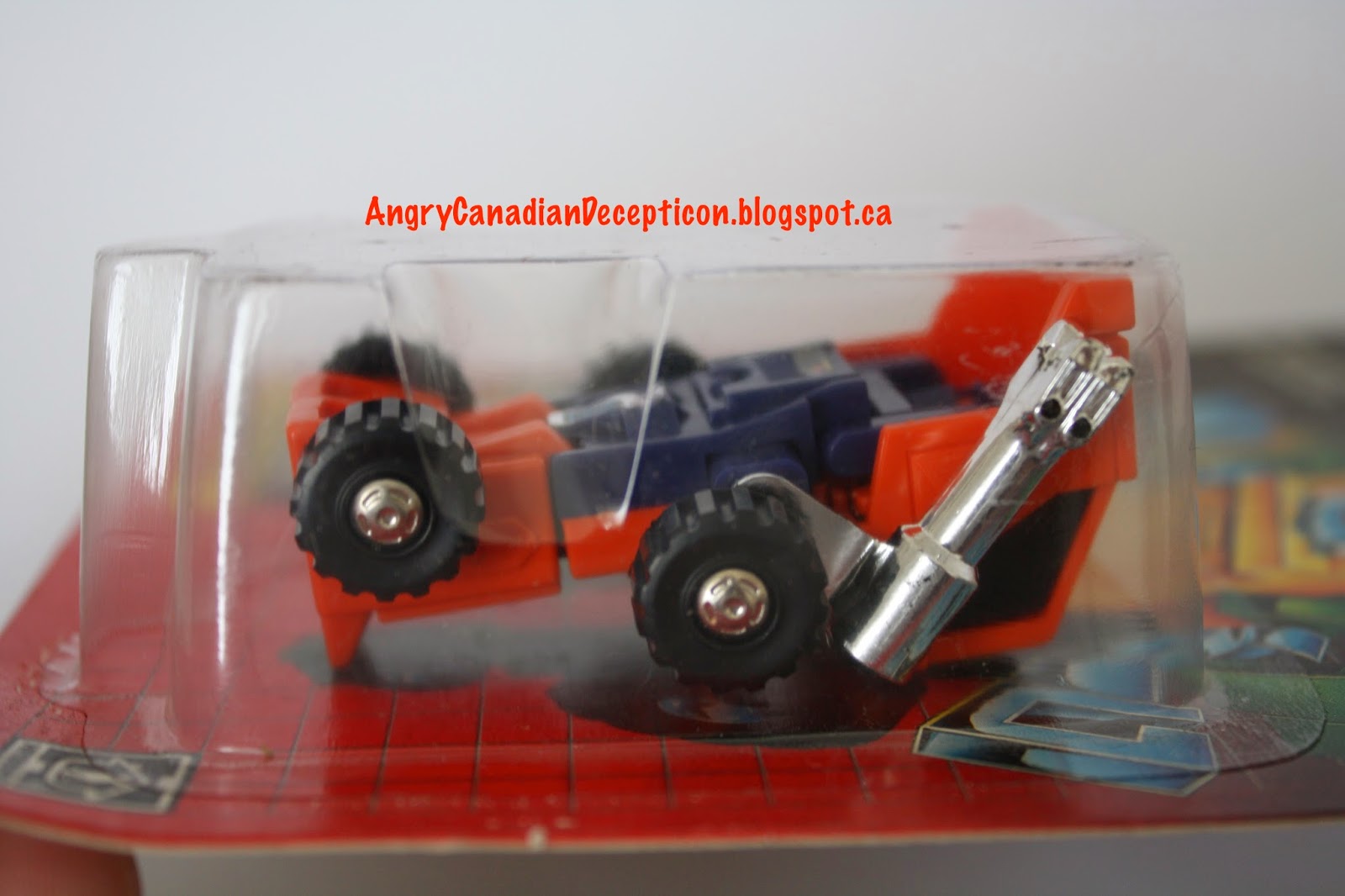 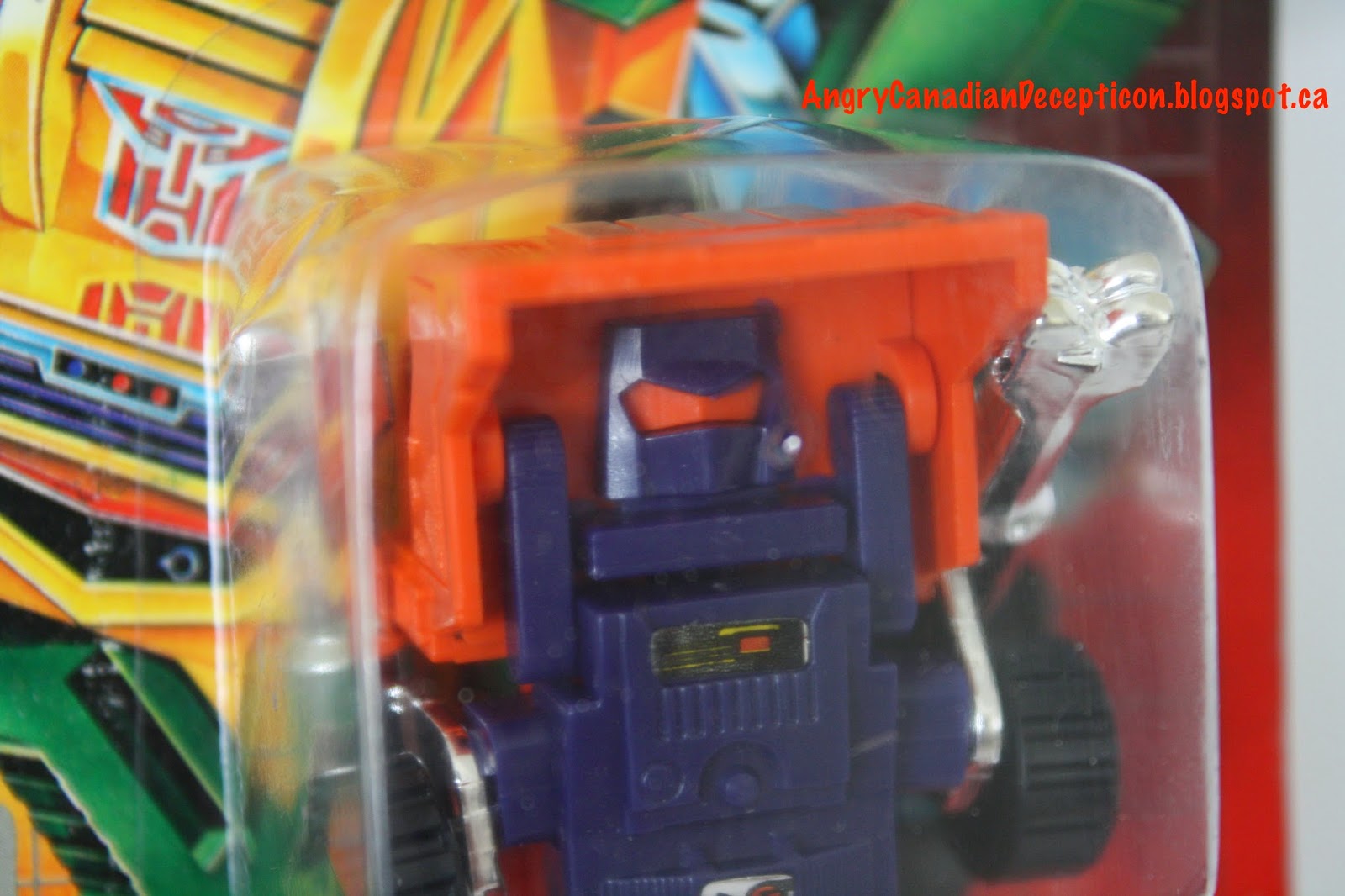 Proof that good things do come in small packages.

Posted by acdecepticon at 11:06 PM