Chalk up another one to the KO category.

I know that there are those of you out there on either ends of the spectrum; you either absolutely love KO's, or you that absolutely hate them.  Listen....I get it.  There can be a whole variety of factors that go into this:


Whatever the case may be, as long as you're part of the TF collecting family then that's


good enough for me.  However, if you have never come across these guys in person, or have never heard of them, then give this posting a chance and maybe I can convince you to at least search these guys out because they really are that good.
Once again, thanks to "M" since these guys came from a photo shoot of his collection, so thanks again for the extra posts.  At the moment I'm working on rearranging and cataloging my own collection so this came at the perfect time.  I do have one of these guys (Ancient Animal #1) which had been luckily part of a lot that I had bid on, and eventually I do want to get both of these sets myself but I can't find the boxes in the condition that I like.

Due to the size of this groups comparisons, I'm going to present this posting in parts.

So let's start with this : Although this is a bootleg, it really deserves to be reviewed since we're talking about a very obscure gem of the 80's: "Prehistory Animal Tyuannosaurus", better known as the KO Dinobot Grimlock. 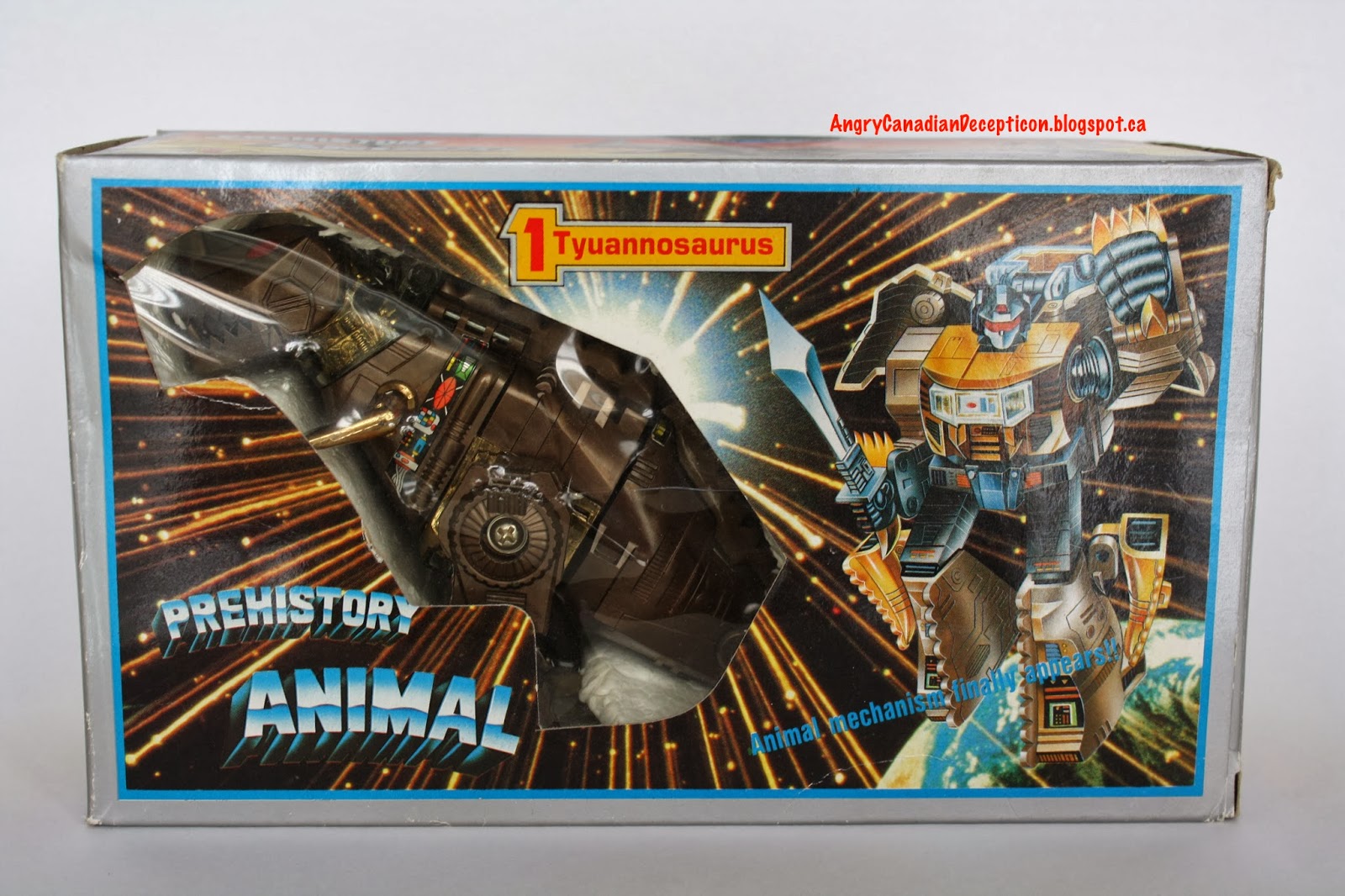 Prehistory Animal #1 "Tyuannosaurus" Dinobot Grimlock remold
This toy was an off brand remold that came out in the mid '80's. It is actually well designed and the materials used are only slightly inferior to the Hasbro or Takara toys. Even though this toy is an off brand it is extremely rare to find.
﻿


In 1985 when the Dinobots hit the toy shelves, chinese bootleggers also released their own versions of  KO Dinobots; Ancient Animal (aka "Dinosaur Robot") which were direct copies of the Diaclone "Kyoryuu Robo", and the Prehistory Animal which were "redesigned" Dinobots like "Tyuannosaurus" (Grimlock).

In the KO world there's not just cheap, lame toys.  Every now and then you come across figures which rank up among the rest, becoming extremely rare and highly collectable.﻿
﻿

Detailing the key aspects of the figure in its robot mode......"Fighting crow"?.....looks like a thigh to me.
﻿ 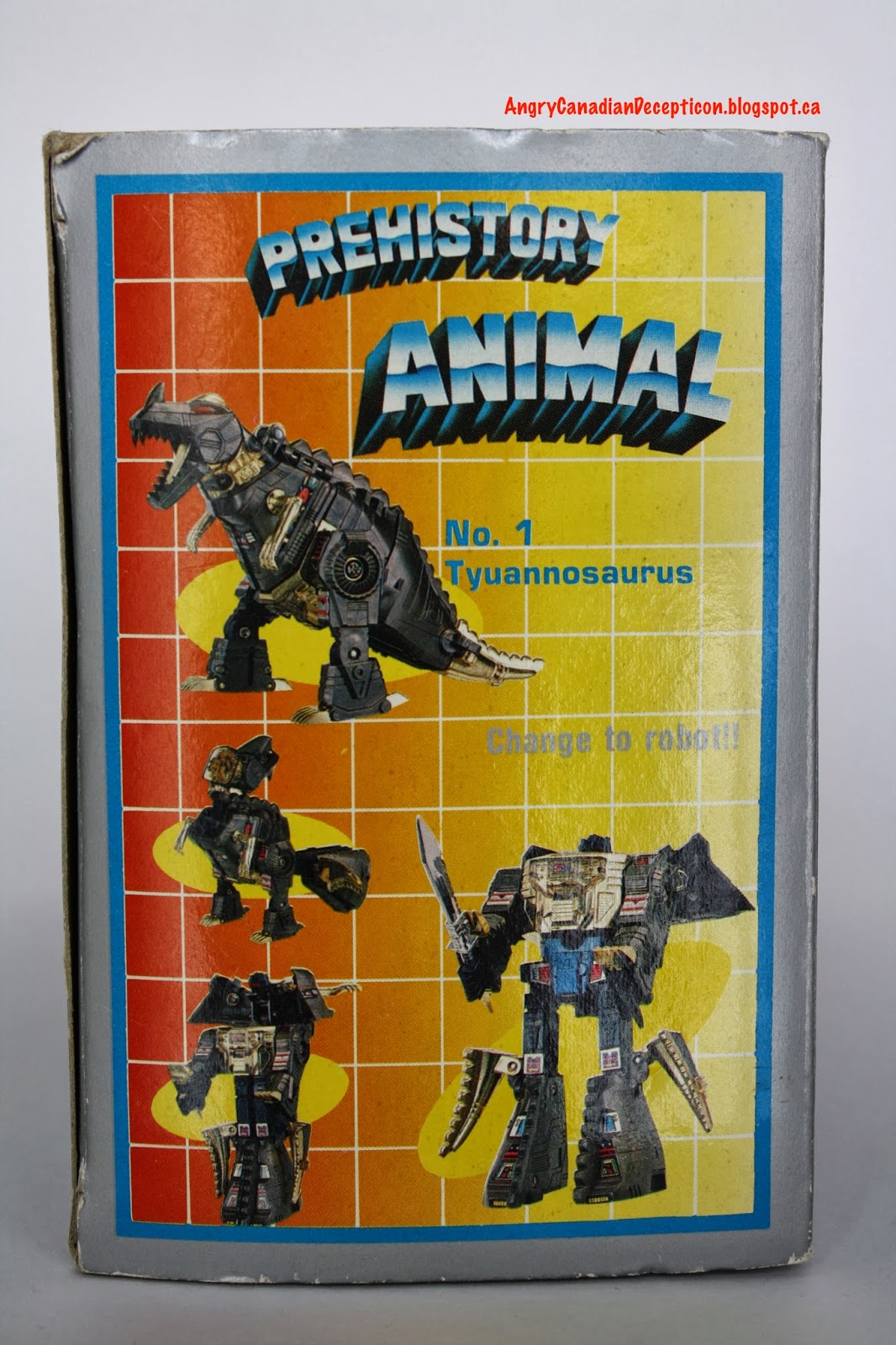 Other side of the box art. 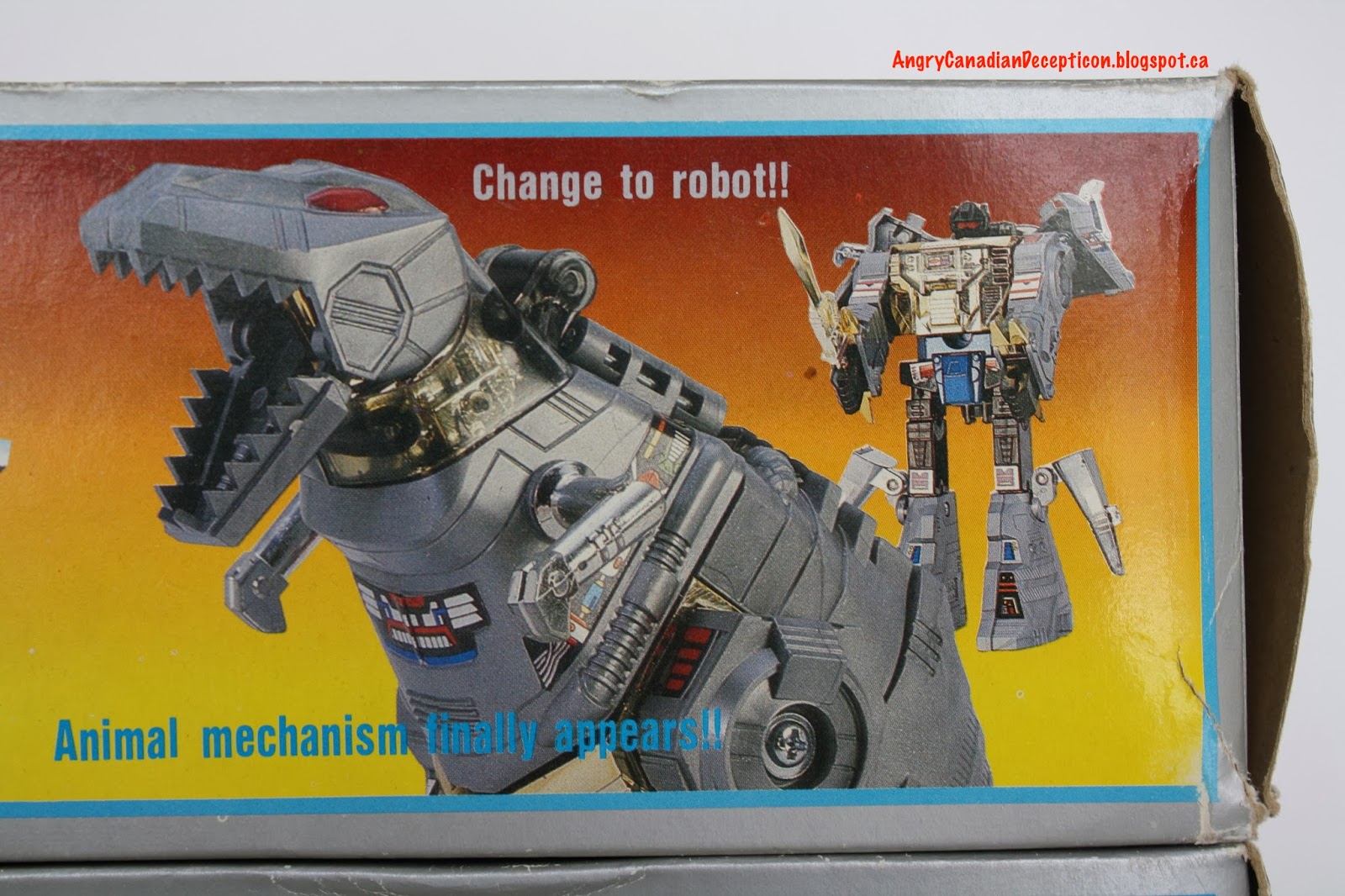 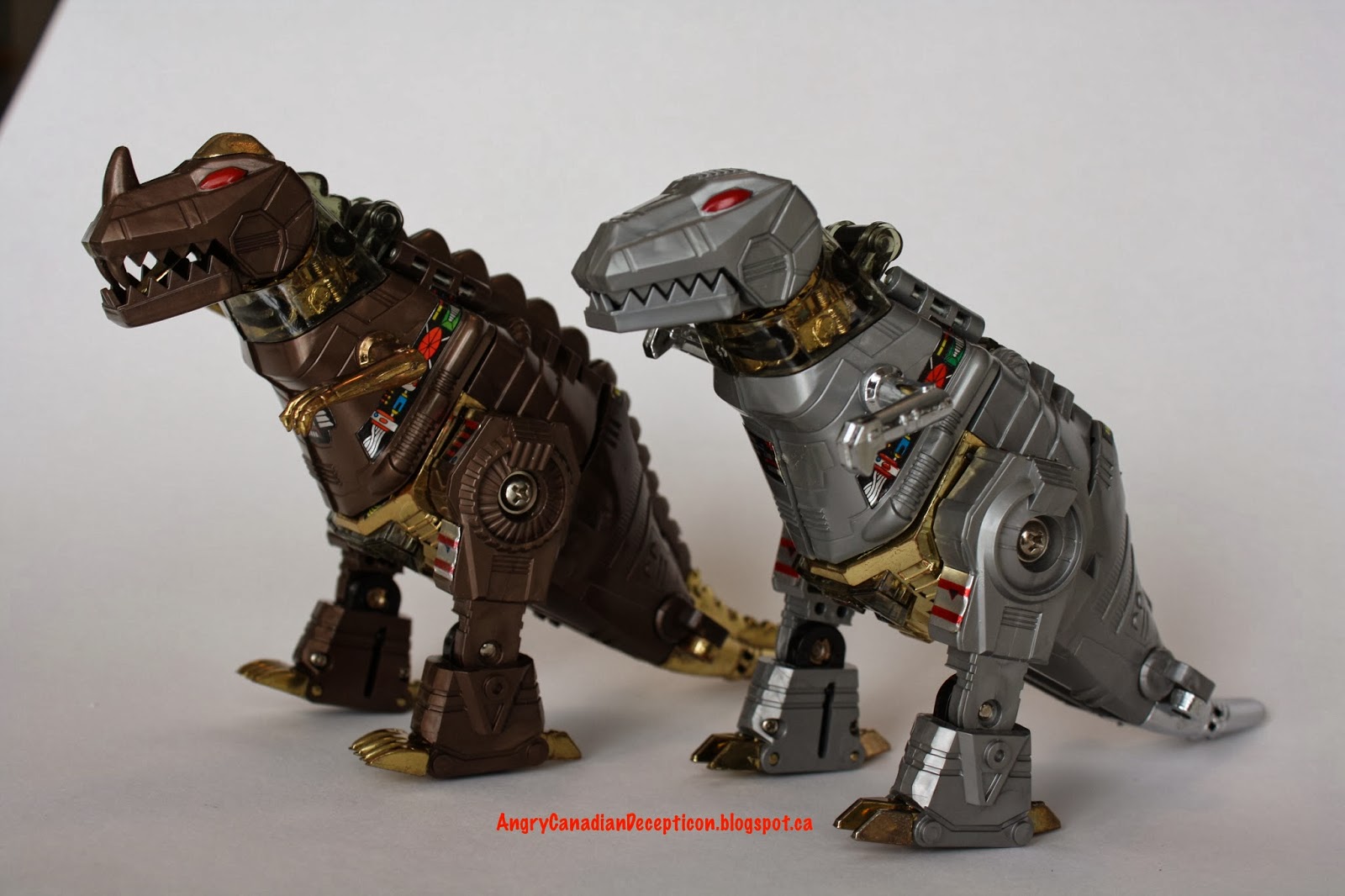 The stickers on these guys do not include the Autobot or Decepticon logo (since these are KO's) because they are not based on Transformers, but rather are based on the Diaclone. 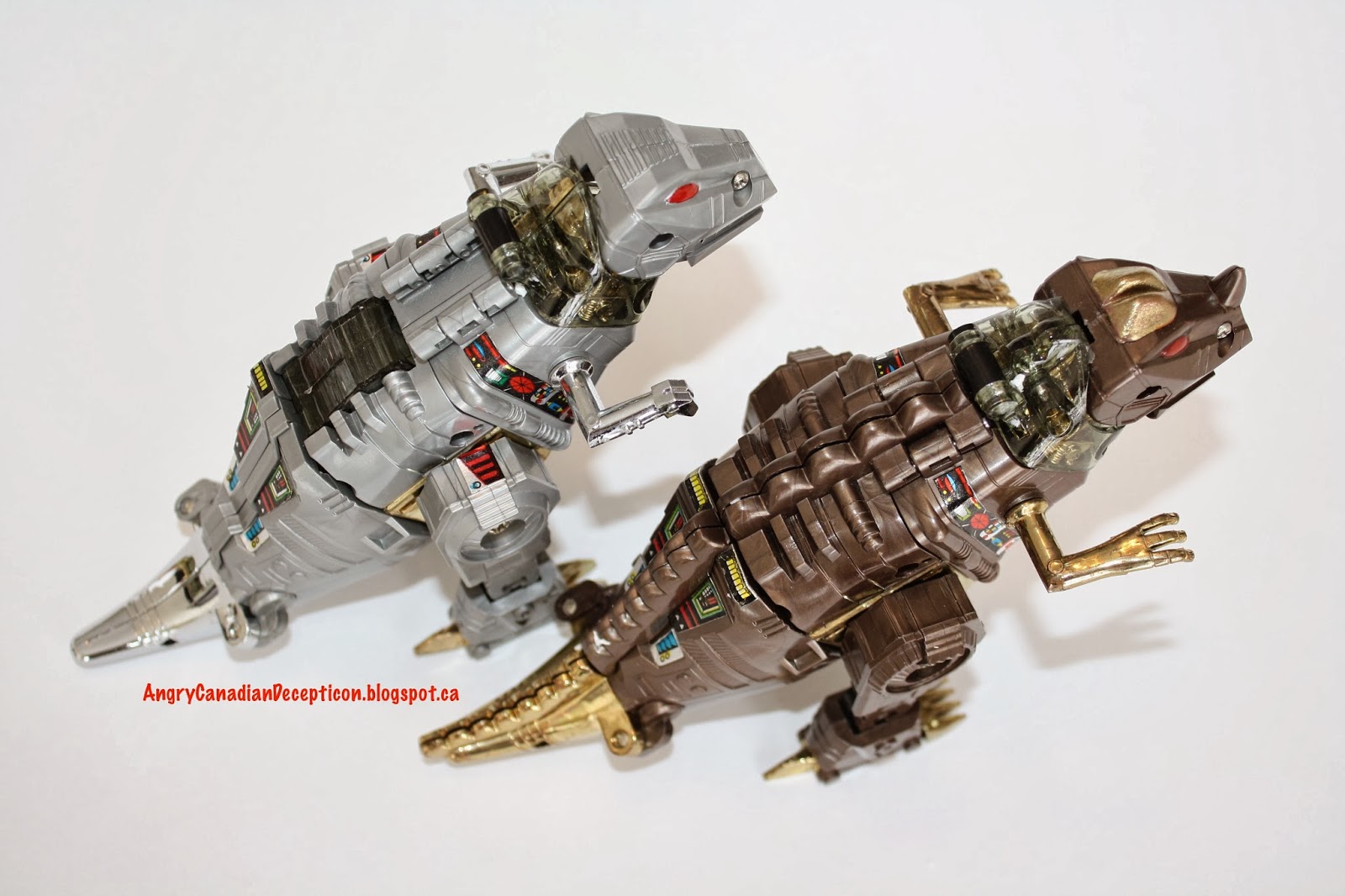 Prehistory Animal has a nice spine ridge running from his neck to the tip of hs tail. 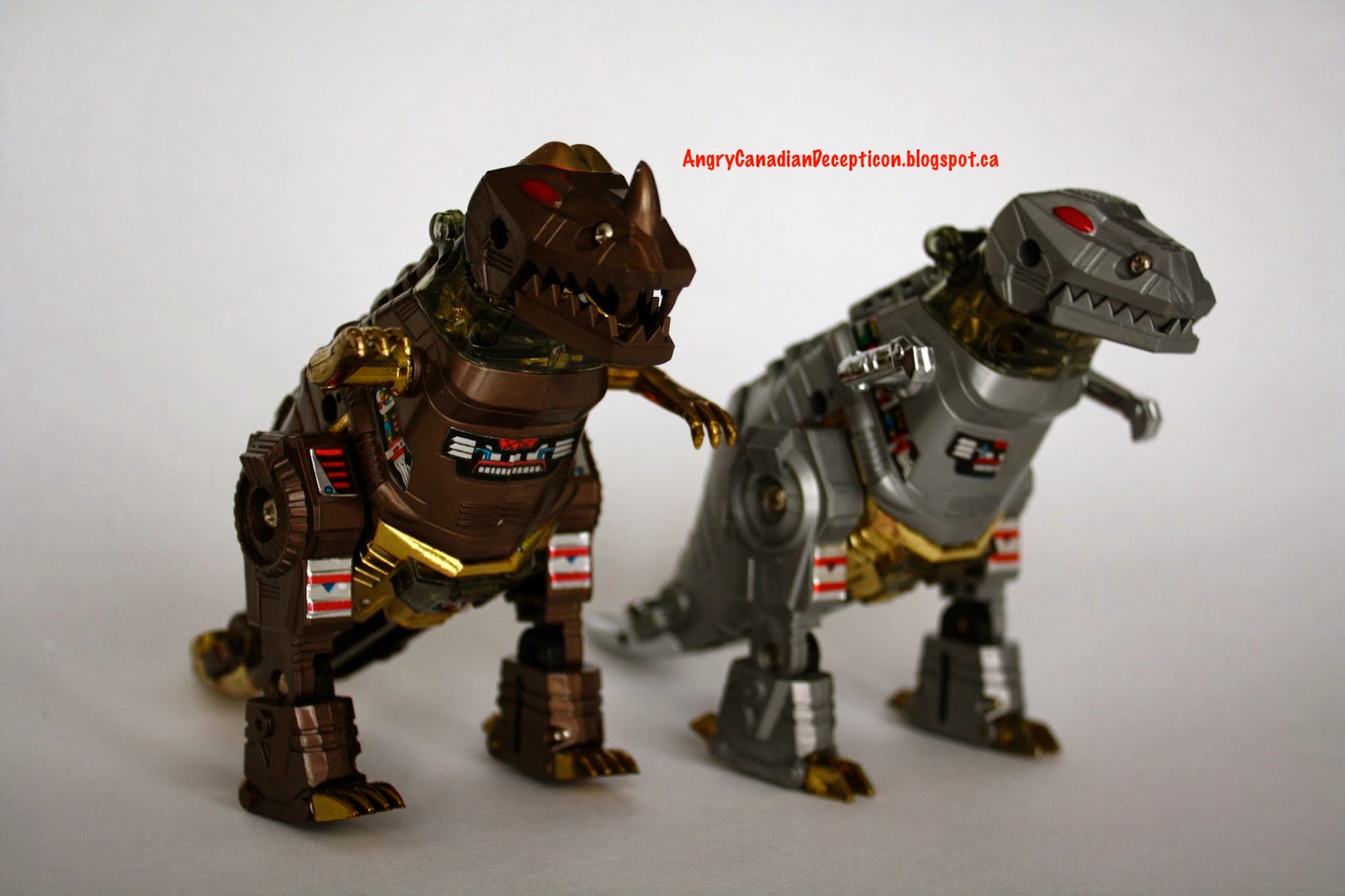 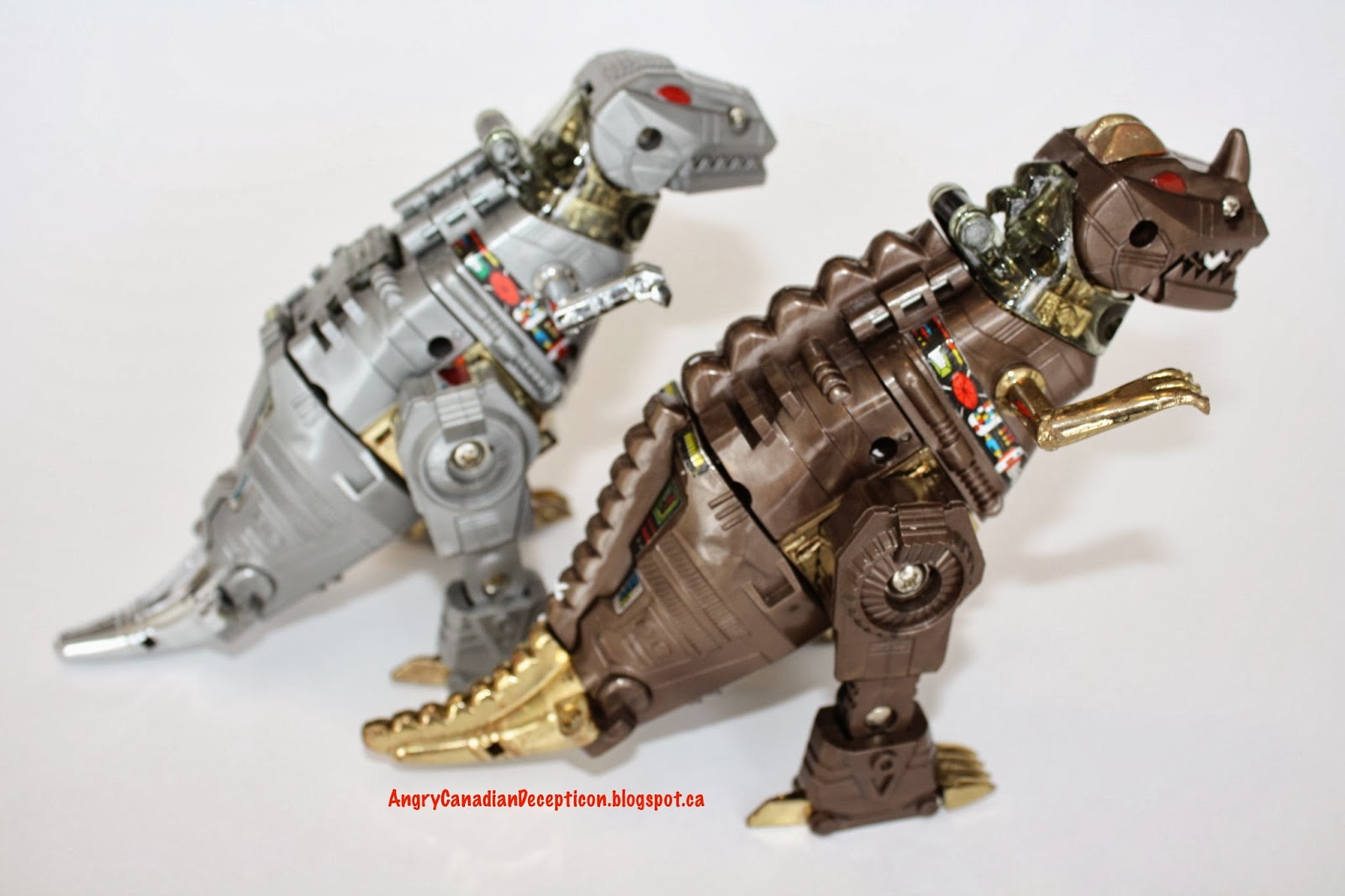 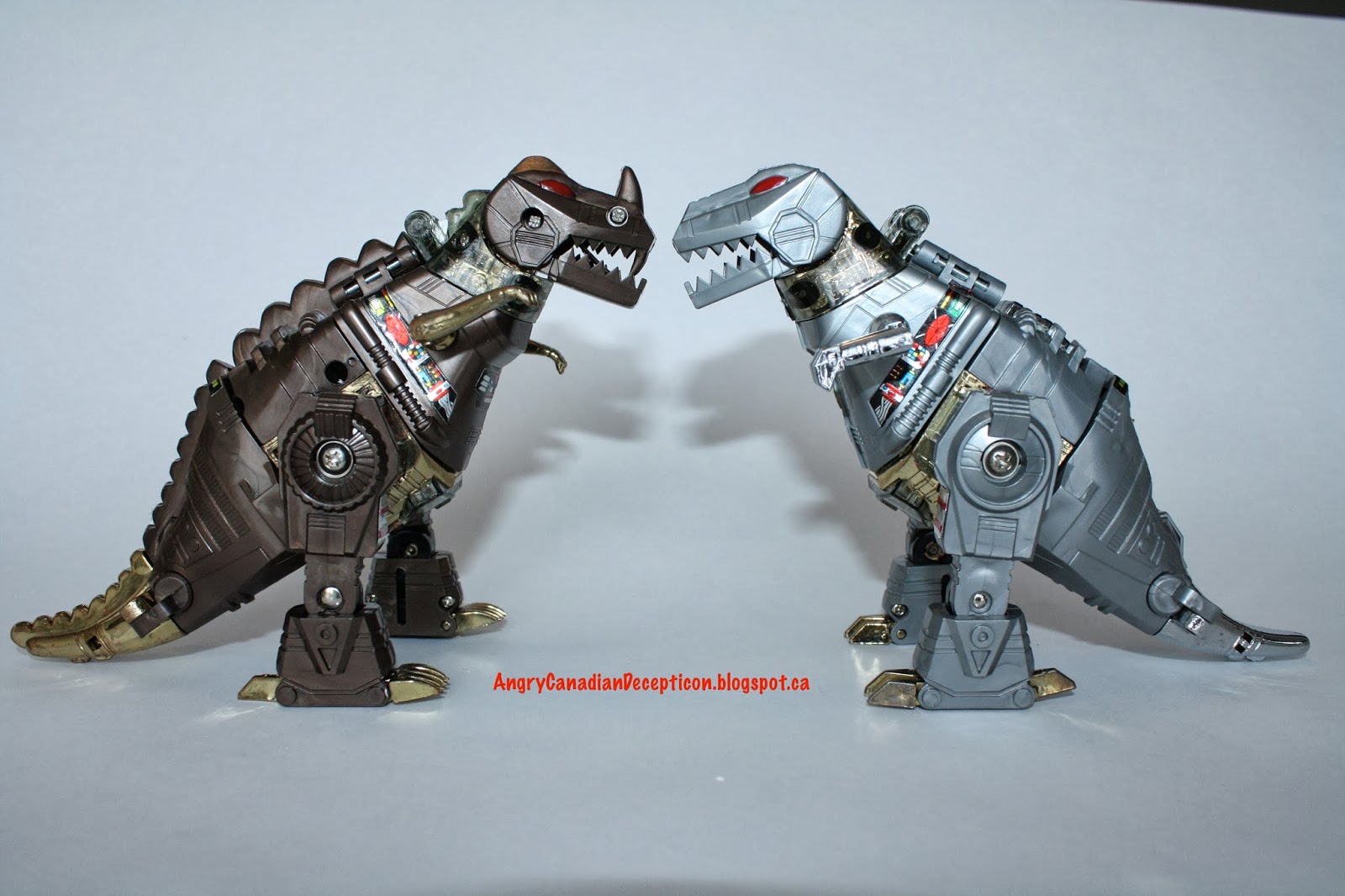 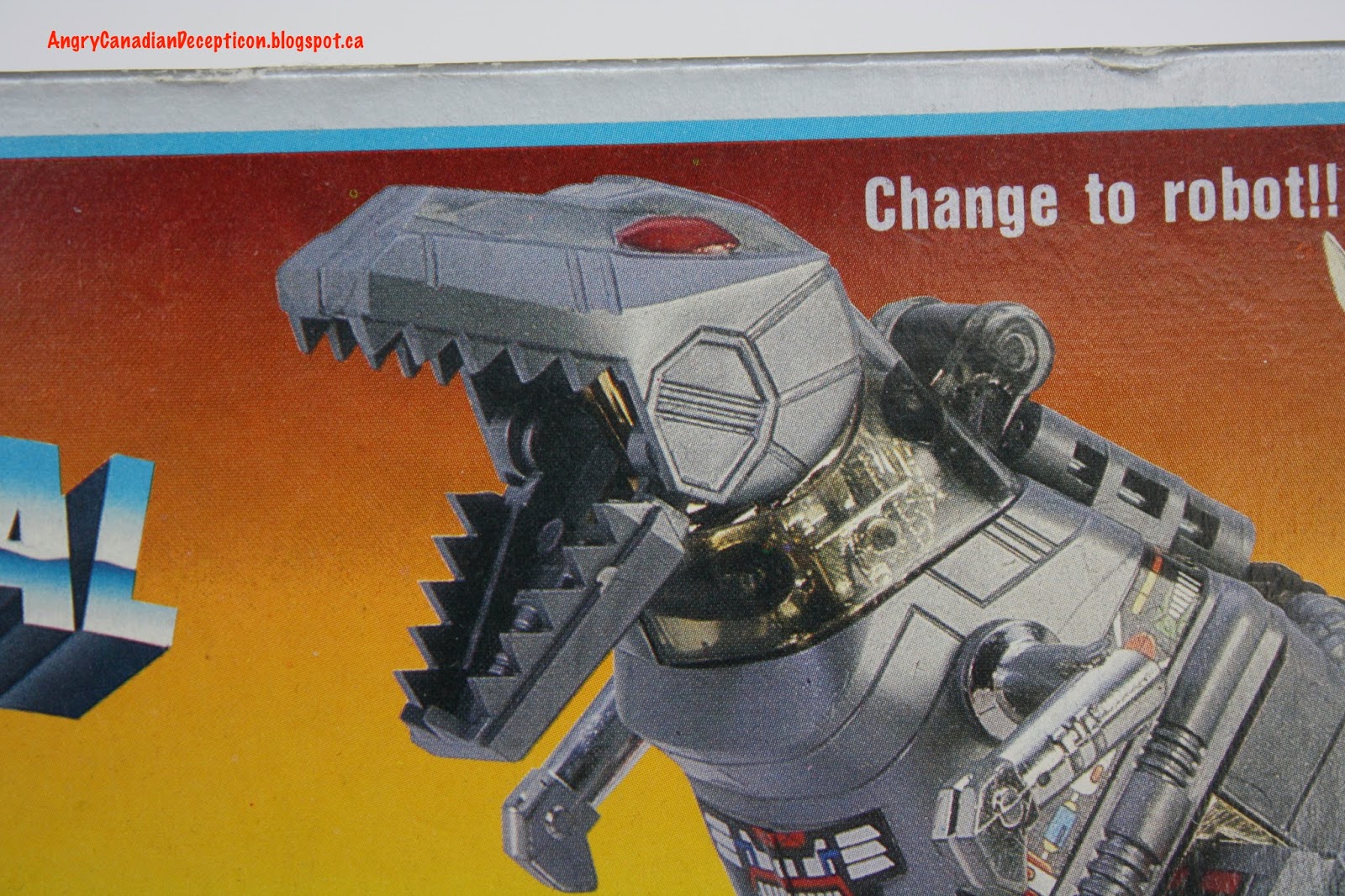 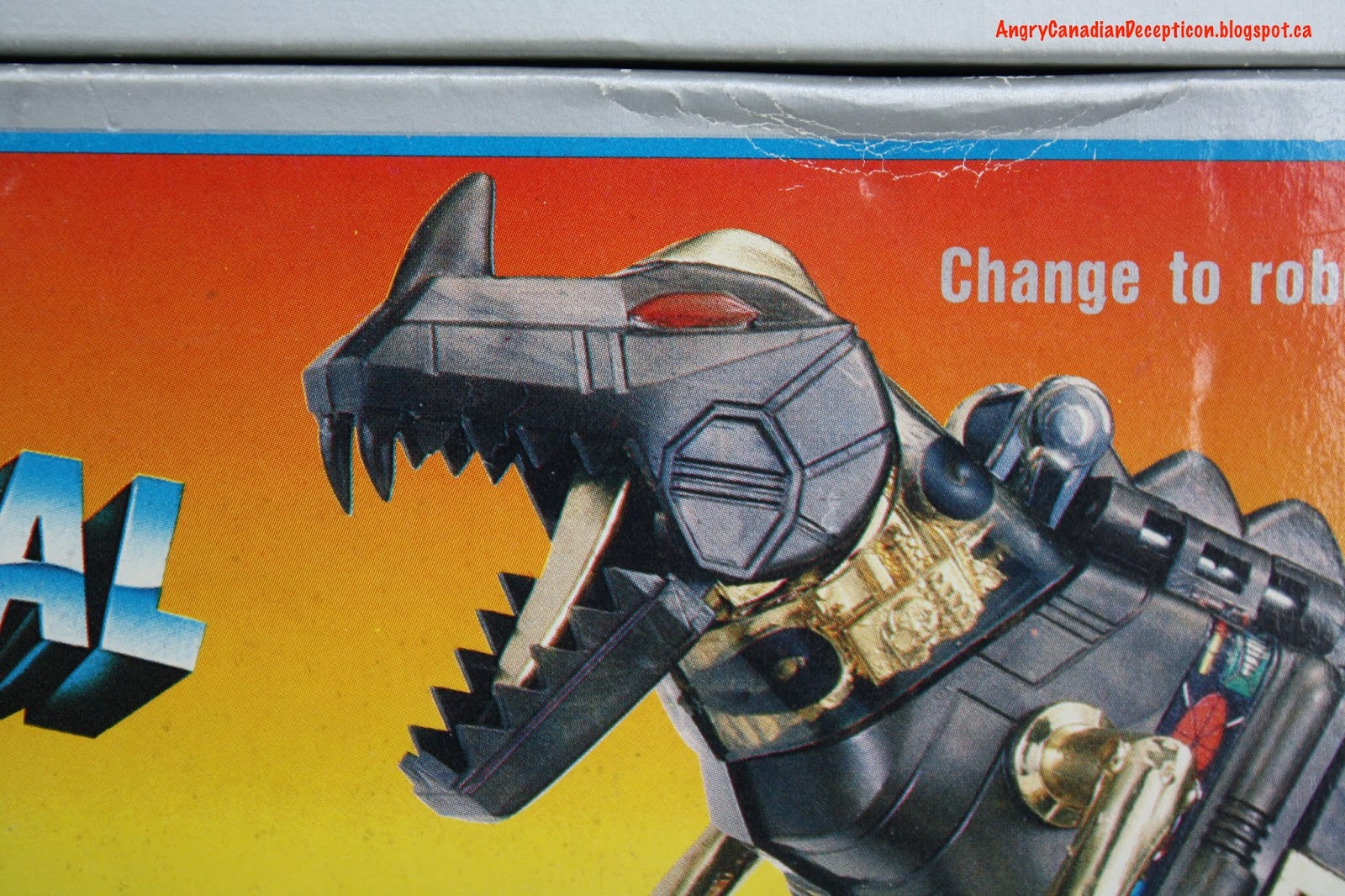 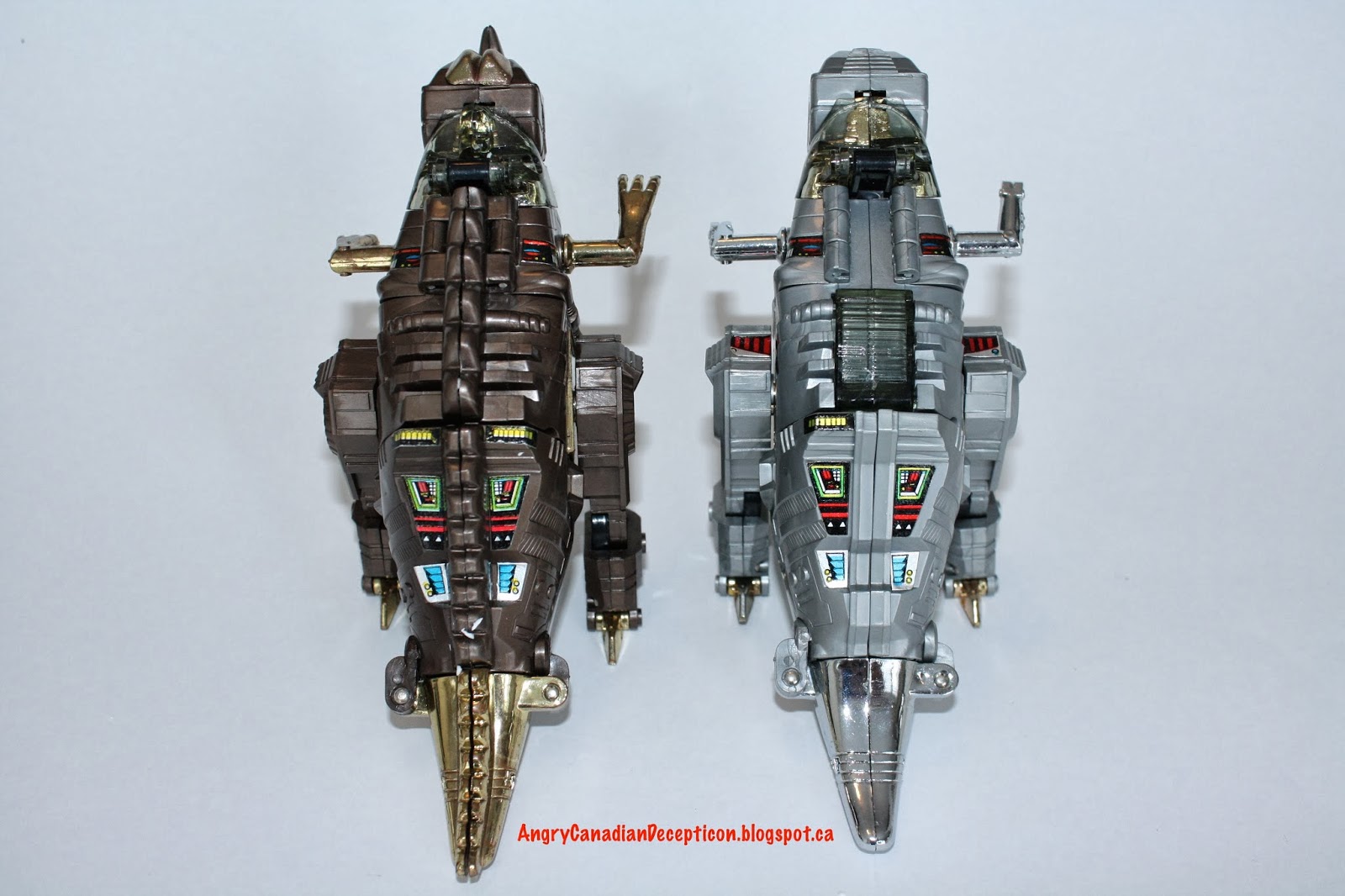 Ancient Animal still has its Diaclone Driver seat while that was eliminated on the Prehistory model.

In the Transformers toy world there can be some highly valuable obscurities like the korean bootleg oversized G1 Bruticus "Destrong Combat Robot".  Unofficial toys such as these guys rank way above the rest of the junk ko's out there and can be found for high prices on auction sites.


KO Dinobots Anicent and Prehistory are true relics, and if found in excellent condition and complete, one could even go as far to say they are one of the "Holy Grails" of KO world.
- angry canadian decepticon -﻿
Posted by acdecepticon at 2:57 AM