As recommended in "Continuum - An IDW Transformers Reading", we were given the order in which to read IDW's Transformers comics in a way that would better suit the complexity of the storylines.  Over the last while I had gone back myself to try this and have re-read / read for the first time the multiple lines of these issues.

Now, never having done this with any other comic line, or if it's even possible (if anyone knows of a series I would like to hear of it), I had no idea how it would work but in the end I couldn't believe how well it did; the characters interactions between each other are even better, the stories still flowed, and the timelines made more sense.  Time well wasted in my opinion.

In my reading of these issues, I came across the transformation of who we know as Shockwave today.  I thought that I would revisit that today and maybe share it for those that have not read the comics yet.


Initially, Shockwave's appearance wasn't that of the lovable, one-fist bumping funny-man that we know and love today.  Nope.  He was a two-eyed, nose, mouth, two-fisted regular faced Cybertronian.

In the public's eye, Shockwave had taken his ideology too far in speaking out and acting against the Senate.


﻿﻿
Recognizing that Proteus and Nominus Prime were resistant to change, Shockwave began to befriend certain promising young Cybertronians and modify them so that they could carry the Matrix of Leadership, with the hope that one of them could take leadership of their race and steer Cybertron off the dark path the Senate had placed it upon.

Proteus' solution for this was to have him pacified.

Hence the Shadowplay "personality inversion" which changed him from a passionate rabble-rouser to an emotionless drone driven only by logic.

Proteus ordered the additional public humiliation of Empurata to give a cover excuse as to why Shockwave stopped making trouble in the Senate.﻿﻿﻿﻿

NOTE : (The Clampdown was a time in Cybertron's history when the planet was essentially put under martial law. It was put in place by the Senate, who claimed to be heightening security measures to protect the populace and weed out potential terrorists, but was in actuality a front that would allow the Senators to increase their own power and track down those who contested their rule.)
﻿﻿
From the public's perception, Shockwave went too far in speaking and acting against the Senate, and was punished with Empurata.
Empurata is a purely physical punishment and is an old tradition on pre-war Cybertron. A tradition of removing the damn heads and hands of criminals and installing new faceless, fingerless replacements so everyone knows to shun them.

NOTE : ("Empurata" is an anagram of the Latin word "amputare", meaning "to cut away". Rather than be used in a surgical context, as the descended word "amputation" is today, "amputare" was a punishment inflicted upon criminals to mark them as such, as it is in the world of More than Meets the Eye.)

It was mostly performed on those constructed cold, almost certainly out of racism, although even those who were forged could find themselves subjected to it if they made powerful enough enemies.
﻿
﻿

﻿ Subsequently, Shockwave stopped making trouble for the Senate and fell in line to atone for his transgressions.....though this was only an act.   The Shadowplay was the real reason for his "change of spark." He's allowed to keep his position in the Senate because now he will tow the party line for Proteus' faction.


Shadowplay is the tampering of a persons mind; altering or removing memories, emotions, etc.  While they might have done it before, this was the biggest change in personality they had done so far to any Cybertronian. 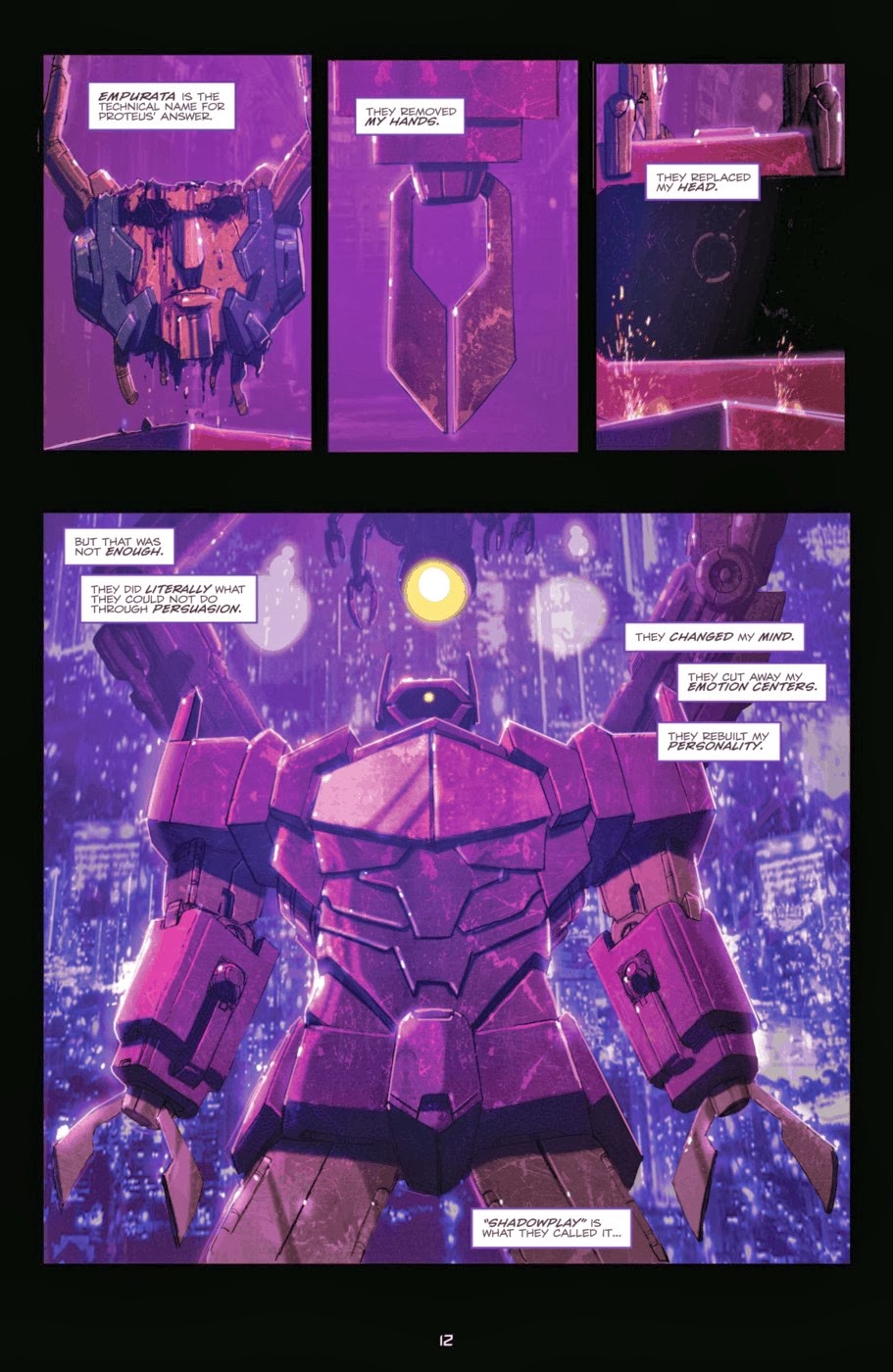 Interestingly, and with the new details about forged vs. constructed cold given in MTMTE #17, it seems Empurata is considered more severe when it is applied to a forged Cybertronian versus one who was constructed cold.

FORGED CYBERTRONIAN : Forging was the natural way for Cybertronians to be created. An energy pulse from Vector Sigma would flash across the world, igniting a hot spot where new sparks would emerge from the planet.
﻿﻿

COLD CONSTRUCTED CYBERTRONIAN :  aka Spark Splicing, was a method created later when Nova Prime learned natural spark creation was slowing. He created it as a way of bolstering the population. The general population was told that it functioned through splitting a Forged spark to create a new life.  That's the official story. Actually, Nova realised that soon there would be no new pulsewaves and panicked: no new sparks means not enough Transformers to create a grand galactic empire. Under the "spark splicing" cover story, Nova's scientists (headed byTyrest) tapped into the Matrix itself and bled it to create new sparks. Thousands of sparks a day were created, with cold-constructed bodies to house them. This only stopped after the Matrix was pinched.
﻿﻿
In MTMTE #11 when they are operating on Shockwave one tech says, "The Empurata is just out of spite - they know he was forged - but the Shadowplay..." 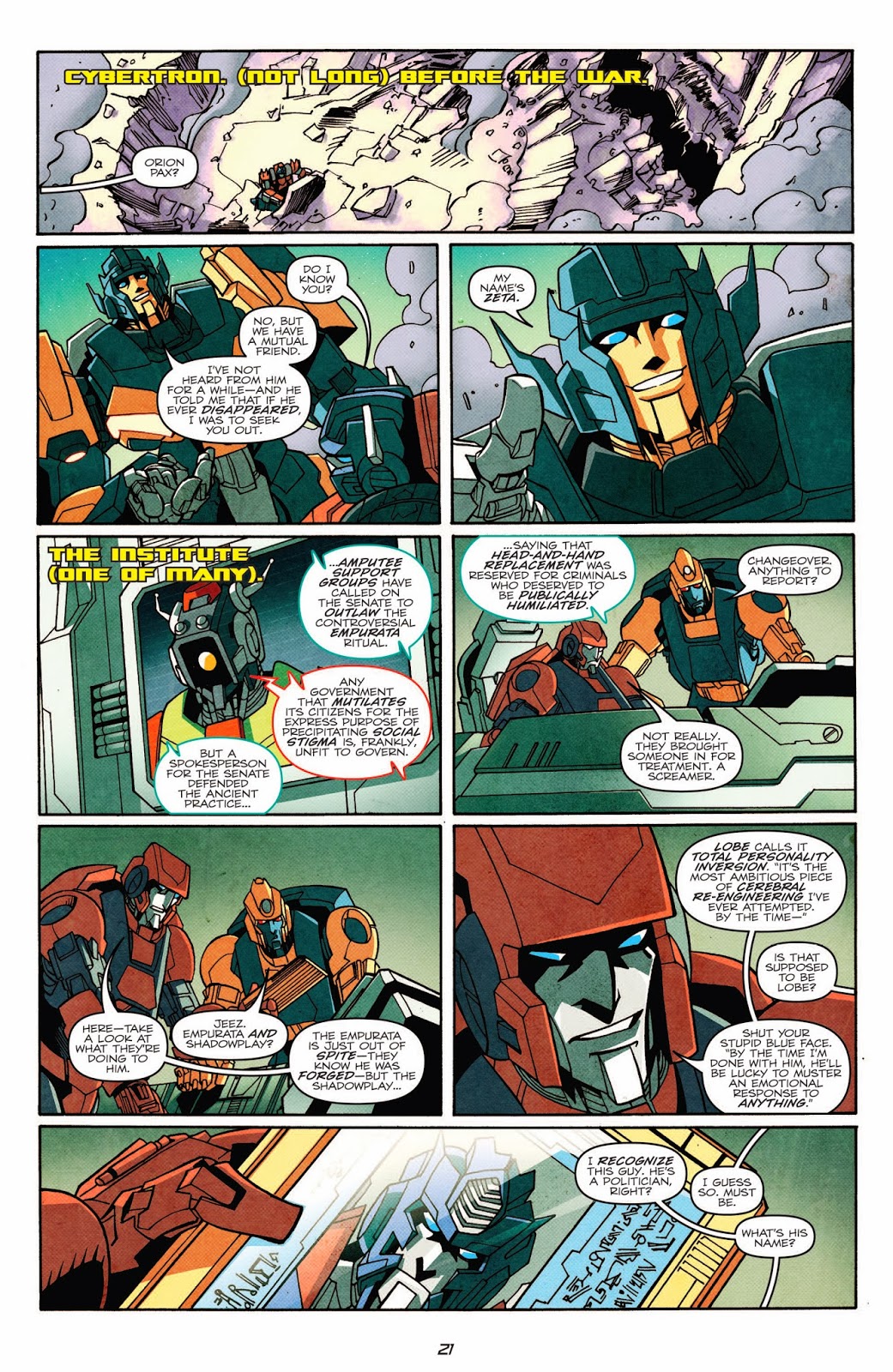 Bots who are forged have bodies that were somehow generated ("forged") around their spark and thus any special abilities or skills imbued in their body parts cannot be easily duplicated. Thus some part of Ratchet and Whirl's skills with surgery and watchmaking respectively are contained in their irreplaceable hands.

This explains why for some Cybertronians it is relatively easy to build and replace new limbs but for others it's not. Rodimus can get his original hands cut off in the quantum engines and get them replaced because his skills as a warrior only require normal manual dexterity. Also, Chromedome's mnemosurgery requires needles in his fingers, but not super dexterity, so he can get his arm easily replaced. Plus he was also constructed cold so his skills are not tied to his original body parts. And Whirl could probably get new "regular" hands constructed to replace the claws he has, but those hands would not allow him to regain his chronosmithing skills, and might be a worse reminder of all that he's lost. But Ratchet's (formerly Pharma's) hands were from a forged Cybertronian with similar dexterity and would probably successfully return Whirl's skills as they already apparently have for Ratchet.

Empurata is not really for "criminals" but rather for people who cross the Senate and/or represent some ideological threat that needs to be eliminated. In MTMTE #6 Whirl recounts how he "got noticed by the wrong sort of people" after he lost his watchmaking business, and people in the Senate wanted him to work for them.
﻿﻿


He resisted them until they performed an Empurata on him, thus taking away his watchmaking skill. The Senators who did that to him probably promised to restore his hands after he completed enough jobs for them, and so they had him under their thumb.


﻿
And Shockwave would get a new "regular" hand and gun from Megatron in RID #17 since he didn't have any need for special manual dexterity as a scientist.

I hope that this post, along with its comic page clippings have made things clearer on Shockwave's history along with intriging those of you that have not yet read these comics to want to go and start picking them up.

I'm not taking these comics for granted what with the lack of shows on TV along with the horrible movie runs.  IDW has done an excellent job in picking the right artists and writers for their comics and I'm sure I am not alone in hoping this ride goes on for a long time.

Posted by acdecepticon at 9:46 PM